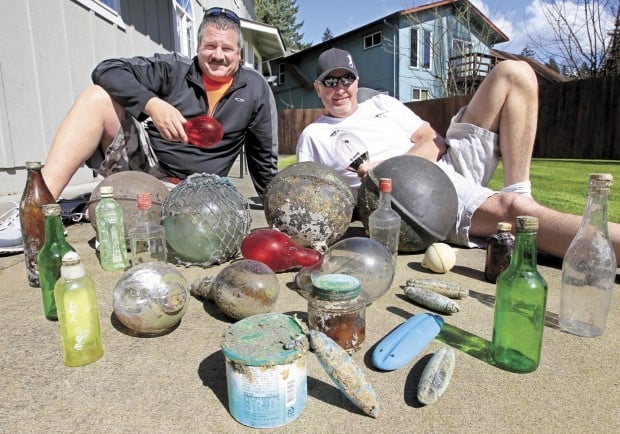 During two recent trips to the beach, Jerry Dean, left, and Russ Bryant, found an assortment of floats, light bulbs and bottles along the Long Beach Peninsula. They believe the items could be debris from the March 2011 Japan tsunami. 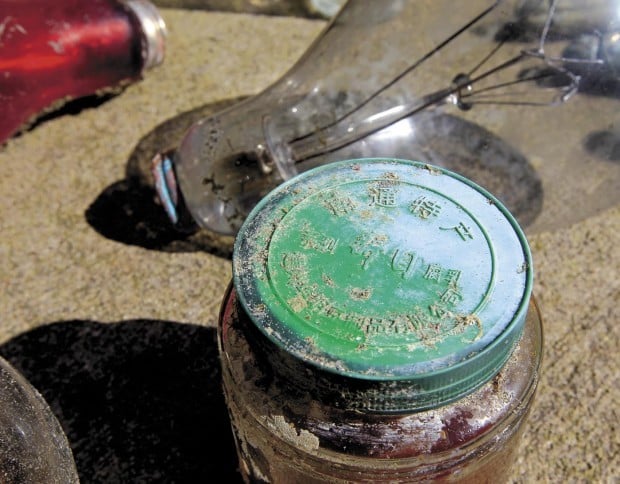 Under the marine growth from their time at sea, the jars and bulbs that Dean and Bryant recovered on the Long Beach Peninsula bear mainly Japanese symbols, they said.

While most experts maintain that debris from last year’s Japanese tsunami won’t wash up on West Coast beaches for almost another year, signs are popping up that some items already have arrived.

A boat known to have been lost in the tsunami is expected to make landfall in British Columbia in about 50 days. But people even closer to home already are picking up suspected tsunami debris.

Intrigued by his find, Dean decided to return with a friend, Russ Bryant, 55, later that week.

“I was kind of overwhelmed with finding that kind of stuff,” Dean said.

The following Friday, he and Bryant had even better luck. They collected four large light bulbs — some marked with Japanese writing — as well as assorted bottles and jars. Four small oblong blue plastic floats struck Dean as a particularly unusual find.

Finding such a large cache of relatively rare items got him wondering if tsunami refuse was arriving early, especially after he read on the National Oceanic and Atmospheric Administration website that lightweight items that sit high in the water — such as light bulbs and buoys — will arrive ahead of heavier items.

“I love the beach, and I go a lot. … (but) In all my forays to the beach, I found a light bulb once in high school,” said Dean, 57. “You just don’t see this kind of debris coming up. … I was texting everybody, taking pictures.”

After contacting the Daily News, he also sent an email sharing dates and descriptions of his find to the marine debris team at NOAA — something that spokesman Peter Murphy hopes more people will do when unusual items wash up on Washington shores.

“A lot of times it’s people who are out on the beaches every day who know what’s normal,” Murphy said. When people see things that strike them as outside the ordinary, he said they should send descriptions, locations, any identifying information, and photographs if possible to marinedebris@noaa.gov.

The boat expected in Canada has confirmed tsunami ties. U.S. Senator Maria Cantwell (D-Wash.) announced Friday that the 50-meter Japanese fishing boat was lost during the tsunami and was found drifting about 120 nautical miles off of Queen Charlotte Island, B.C. Officials estimate that at its current trajectory and speed, the boat will make landfall in about 50 days if it isn’t removed before then.

At this point, determining whether or not Dean’s finds really are from the tsunami is nearly impossible.

“I don’t know that this stuff hasn’t just been washed out of the Pacific Gyre,” Dean said.

The reality is that in most cases, scientists don’t have enough information to determine what is and isn’t tsunami debris.

“One of the challenges is that, without a unique identifier, its difficult to fingerprint [items] back to their origin or time,” Murphy said. “Sometimes place or location can be determined, but rarely both.”

Murphy said Friday that as scientists gather more data about weather patterns and reports from satellites and ships, their predictions about where, when, and how much flotsam to expect on local beaches will get more precise.

“Now we can look back and say, “What did the weather actually do over the last year? … We are working to update the models continuously,” Murphy said.

Skepticism about the debris’ origins isn’t likely to stop beachcombers like Dean from heading out to find more treasures — treasures he believes are from the tsunami.

“I can’t stand it now. I’m addicted,” Dean said. “For something to get across the ocean in one year blows my mind, but at the same time, you do feel a little bit remorseful, because you know how got it there.”

LONG BEACH — July 5, community members will gather to clean up the thousands of chunks of Styrofoam that began washing up on Pacific County be…

As more Japanese tsunami debris continues to wash ashore near Long Beach, local officials are getting worried about how they should react.

Summer of tsunami debris could be dangerous for wildlife, too

A weak and distressed brown pelican recently crash-landed on a roof in Seaside, Ore. A plastic bag was wrapped around its neck so tightly that…

During two recent trips to the beach, Jerry Dean, left, and Russ Bryant, found an assortment of floats, light bulbs and bottles along the Long Beach Peninsula. They believe the items could be debris from the March 2011 Japan tsunami.

Under the marine growth from their time at sea, the jars and bulbs that Dean and Bryant recovered on the Long Beach Peninsula bear mainly Japanese symbols, they said.