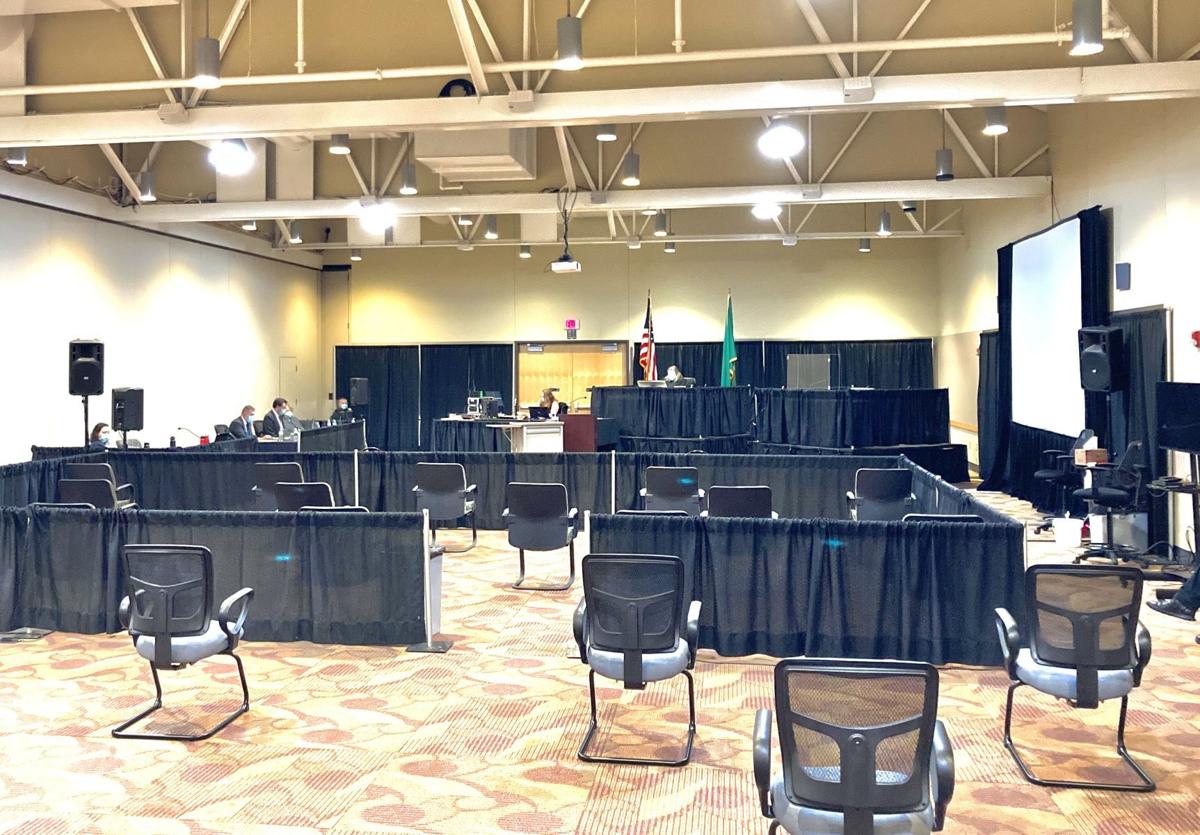 A large room in the Cowlitz County Event Center, shown here on Wednesday, is home to the center's first criminal trial, the first Superior Court criminal trial since March. 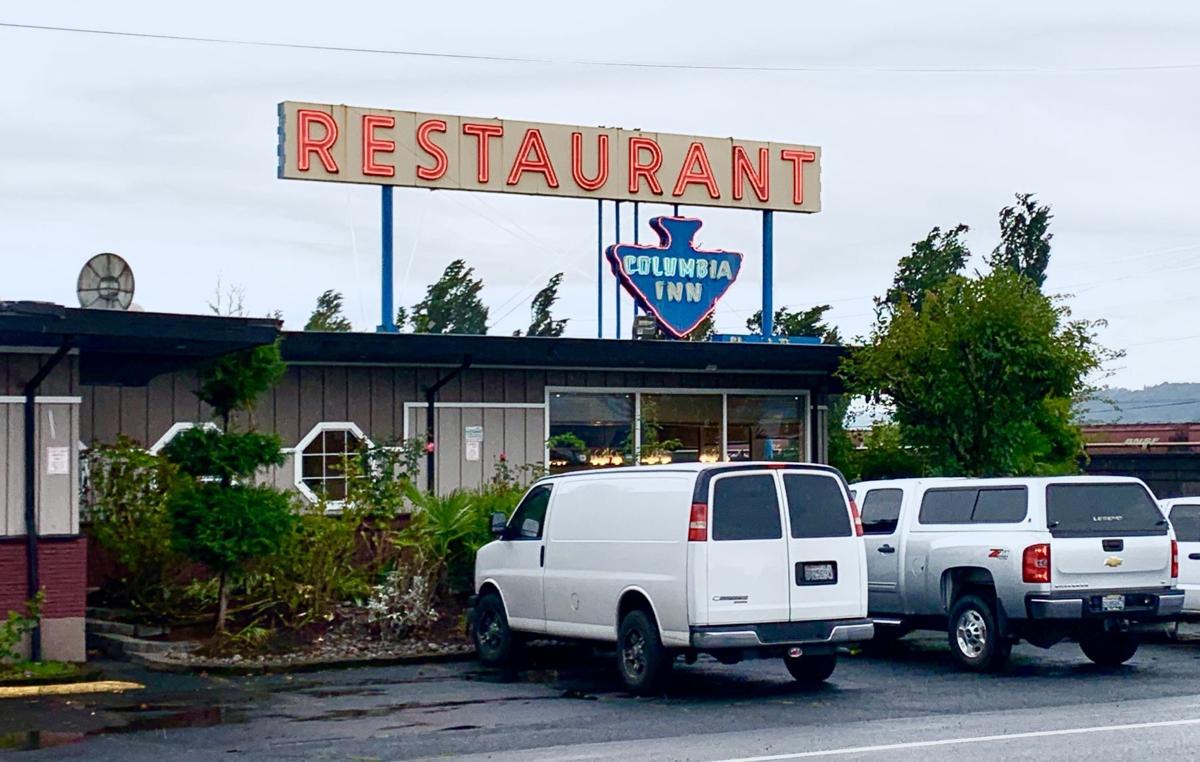 Prosecutors secretly tape-recorded Dawn Rolfe hatching what they say was a murder plot in meetings at the Columbia Inn in Kalama, shown here this week, in August 2019.

Lawyers for Dawn Rolfe, on trial in Longview this week for plotting to kill her estranged husband, said Wednesday her alleged scheme to shoot and kill at least three people late last summer was simply a self-described “Thelma and Louise “ fantasy that she never intended to carry out.

Brenda Mortensen took the stand at the start of the trial and said she believed that the 54-year-old Rolfe, her former friend and coworker, was deadly serious.

In 90 minutes of testimony in a unique pandemic-informed courtroom at the Cowlitz County Event Center, Mortensen walked through a tense two weeks from Aug. 23 to Sept. 6, 2019, in which she worked with police investigators to secretly tape record Rolfe in meetings at the Columbia Inn in Kalama. Both women lived in Kalama and became friends as co-workers at the 7th Avenue Walmart in Longview. They shared drinks, pizza and personal stories in an eight-month friendship, Mortensen said in court.

Mortensen testified that Rolfe initially wanted to hire a “hit man” from Portland to kill Richard Rolfe, his mother and his girlfriend, for $200 plus the contents of a household safe.

When Dawn Rolfe could not find a hired killer, Mortensen said Rolfe decided to do it herself, in a single morning attack with a single handgun, even killing one of their sons as “a casualty of circumstance” if he got in the way.

Mortensen said Rolfe told her she was going to make a silencer for the gun using guidance from a YouTube video. The two agreed to call each other “Thelma and Louise” —named after the iconic girl-gangster-buddy movie — during the plotting conversations. They referred to a possible murder weapon as an “air fryer.”

Mortensen said that on several occasions she had tried to convince Rolfe to drop the murder plot, which she described as a case of revenge for a failed marriage.

“She said she was going to blow his head off and would say, “My face is going to be the last thing you see.”

Mortensen told the court Wednesday that she feared for her life during the two weeks that she worked with police, after calling them to reveal what she believed to be her friend’s murderous scheme.

She said that when Rolfe was arrested outside her home, “I just sat down on my steps and cried, because it all had been so stressful.”

Mortensen said police gave her a handgun to offer up as a murder weapon, and when Rolfe grabbed the weapon from Mortensen’s car on Sept. 6, she was immediately arrested by Kelso police and Cowlitz County Sheriff’s deputies.

Superior Court Judge Patricia Fassett is presiding at the trial, which is the first criminal trial held in the county since March, and also the first held in a makeshift courtroom in a a 50-by-150 foot room at the Event Center. The jury of five men, seven women and three female alternates, sat six feet apart from each other, wearing masks.

Witnesses testified behind a large Plexiglas shield and all courtroom officials — the judge, lawyer and court attendants — all wore masks.

Edward DeBray of the Cowlitz County Public Defense Office, said he intends to put Rolfe on the stand Friday. DeBray cross-examined Mortensen for less than five minutes on the trial’s opening day.

The prosecution, led by Aila Wallace of the county Prosecutor’s Office, is offering multiple tape recorded conversations and text messages between Rolfe and Mortensen as proof of Rolfe’s guilt.

Rolfe is charged with attempted murder, felony harassment and unlawful possession of a firearm, in connection with an alleged plot to kill her estranged husband, Richard Rolfe.

In his opening statement for the defense, Josh Gooday of the Public Defense Office, said Rolfe was in “a deep depression because her world had crumbled” because of the breakup of her 25-year marriage. “She lost her footing in life,” he said.

Monticello Hotel gets new owner who plans to clean up building, reputation

With nearly five years of hair styling experience under her belt, Longview resident Paige Strock has slowly been building toward opening her o…

This weekend, Brookelyn Alblinger should have been attending the Castle Rock homecoming game and dressing up for her first homecoming dance.

In the race for Cowlitz County District 1 commissioner, voters on Nov. 3 will choose between two Republicans with opposing leadership styles, …

Phone lines to 911 dispatch were down statewide, including in Cowlitz County, for less than an hour Thursday afternoon, according to the count…

COVID-19 testing in Cowlitz County has increased over the last two months but is not as high as health officials would like. Public health off…

A large room in the Cowlitz County Event Center, shown here on Wednesday, is home to the center's first criminal trial, the first Superior Court criminal trial since March.

Prosecutors secretly tape-recorded Dawn Rolfe hatching what they say was a murder plot in meetings at the Columbia Inn in Kalama, shown here this week, in August 2019.