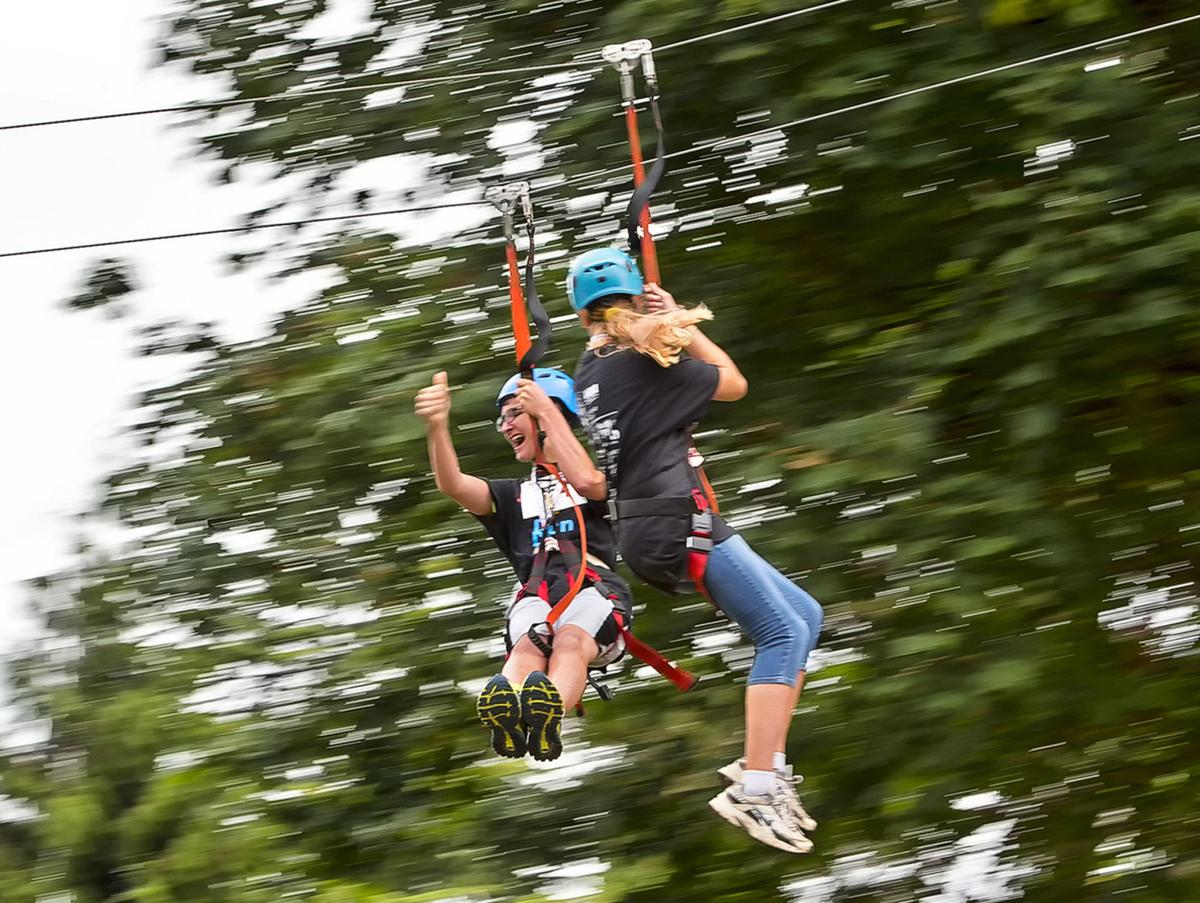 Squirrels may leap through trees, but Lucas Boursaw, left, and his sister Micah Boursaw zip past them as they came from Rainier to try out the new, larger zip line at Squirrel Fest. 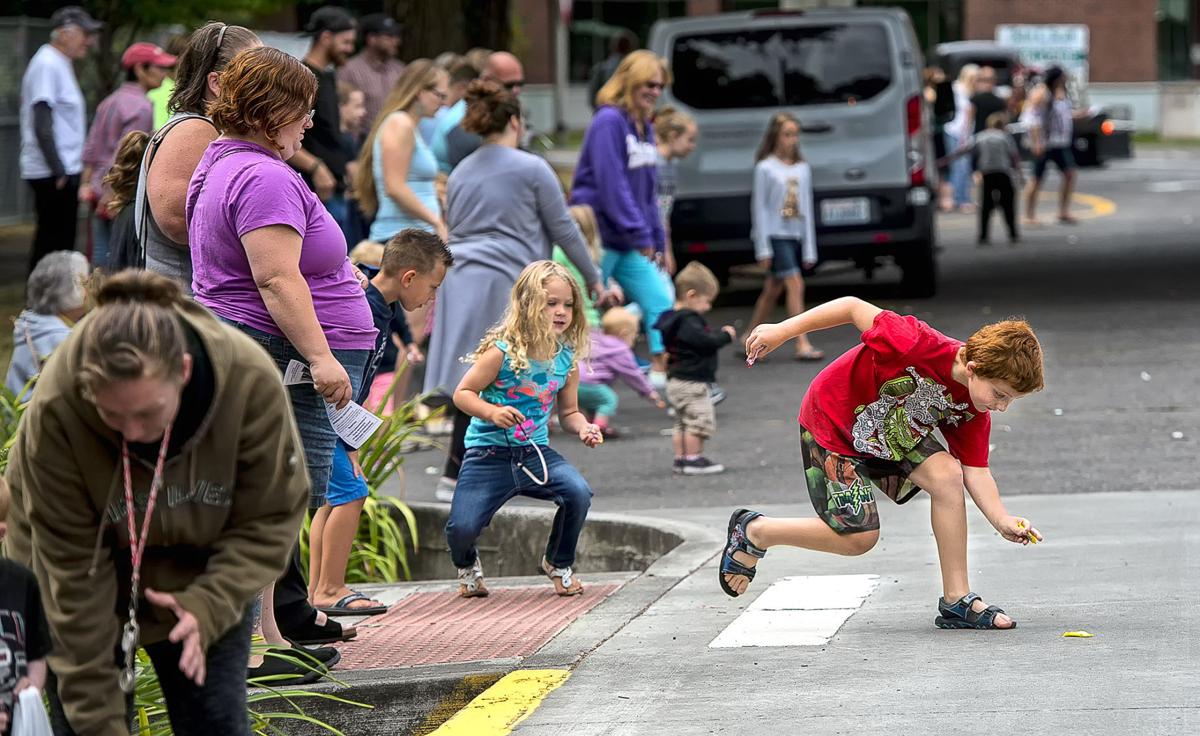 Adam Gaston pops up from the sidewalk to snap up a piece of tossed candy during the parade opening the day-long Squirrel Fest activities at the Civic Center in Longview. 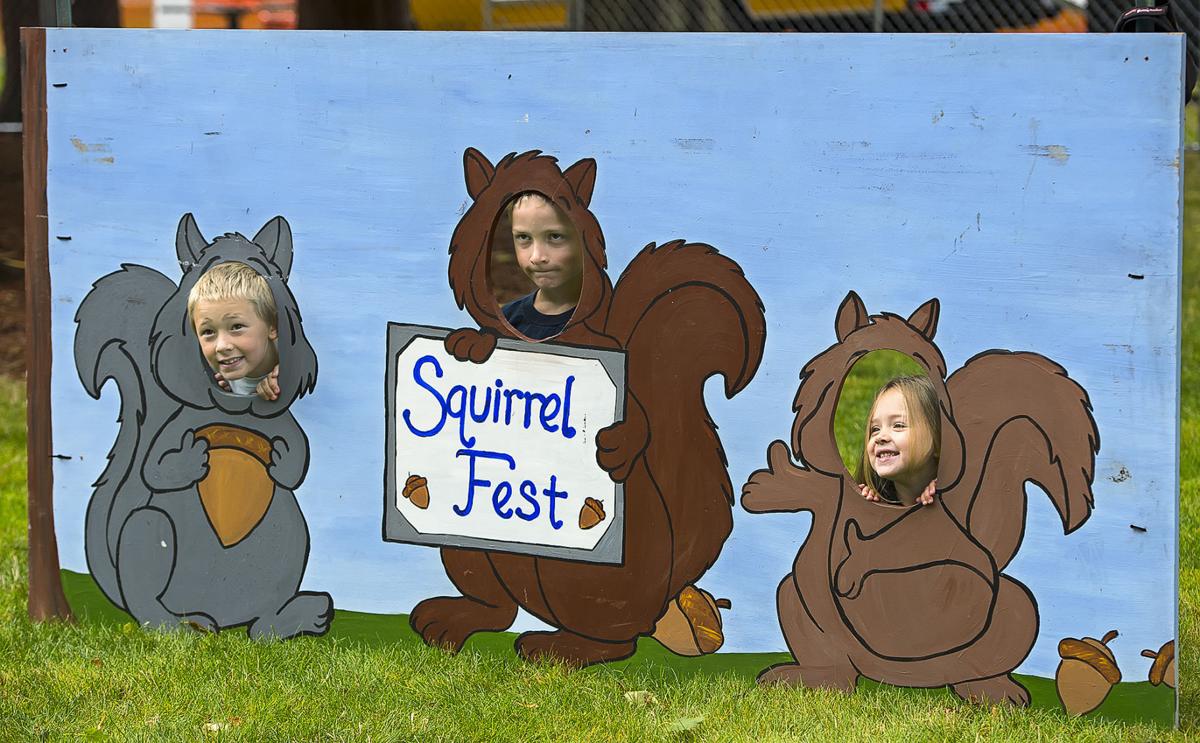 Caden, left, Cody, center, and Maliya Larimore of Silver Lake were some of the first kids to make a squirrely photo at Squirrel Fest.

In its seventh year, Squirrel Fest continues to attract fun-seekers and squirrel enthusiasts from places far beyond Cowlitz County.

Three squirrel-obsessed Seattleites left King County at 5 a.m. just to get to Longview in time for the parade. Igor Keller, 52, Beck Prigot, 25, and Stacy, 37 all said they were enjoying the festival. However, they were a little disappointed at the lack of fuzzy rodents to play with.

“We were really hoping to be able to pet a squirrel, but it doesn’t seem like that’s going to happen,” Prigot said. “We actually brought extra peanuts so we could feed the squirrels if we see any.”

The trio said they love squirrels for their ingenuity and kindness.

“Where I grew up, there were many, many squirrels in my backyard, and they were always very nice and pleasant,” Keller said. “The cats wouldn’t catch the squirrels. They’d catch the rats and the mice, but the squirrels were a little smarter.”

“They’re tenacious,” Stacy added. “They managed to thrive alongside people in people habitats, despite people being kind of terrible.”

The one-day festival, hosted by local group The Sandbaggers, featured all sorts of events for all ages on Saturday, starting with a 5K fun run at 9 a.m. and a parade around the Civic Center an hour later.

This year, the festival expanded its ride section. According to Sandbaggers co-chair Allan Erickson, the group contracted with a Seattle events company to add a large zipline, a rock wall, and a unique inflatable bungee-cord experience called “Monkey Madness.”

“We just used some of our sponsor money to provide a higher level of children’s entertainment (this year),” Erickson said.

The zipline was especially popular. On Saturday morning, the line was almost Disneyland-esque in size, stuffed with excited kids and adults.

Three of those excited kids, cousins 9-year-old Lilly Krull and 13-year-old Trinity Facchini, both from Reno, Nevada, and 10-year-old Carly Hilton from Castle Rock, all said they loved the zipline despite initial reservations.

“It was exciting, but a little scary when I found out it was that high up,” Krull said.

Naturally, there were other attractions that captured people’s attention Saturday.

Longview resident Leslie Dahl brought her two grandchildren, Eleanor and Oliver Mcelwee from Bothell to see Squirrel Fest. During the parade, Oliver, 9, remarked that he was having a great time already.

Ellie Calhoun, from Tacoma, said she and her friends primarily visited Squirrel Fest to run in the 5K, but she was a little intrigued by the rodent-themed event.

“I know about Squirrel Fest because of the (squirrel) bridges and we’re all originally from Clatskanie,” Calhoun, 21, said. There’s so many squirrels. I’ve never seen a place that loves squirrels as much as here. Hardcore squirrel place.”

Erickson said although it’s very difficult to estimate the number of Squirrel Fest attendees, since the event is free, he estimated 5,000 visitors came to Civic Circle yesterday.

Tim South, another member of the Sandbaggers, added that the event serves an important role in entertaining the community without an admission fee.

“It’s a community celebration, and we don’t charge anything for any of these rides,” he said. “Any other of these kind of places where you go to get kids’ faces painted or go on a ride, they’re going to ask for a little bit of money to do that. So it’s good for everyone to just come and have a good time.”

The Seattle squirrel lovers said they were impressed by the festival, and plan on coming back for more.

“I hope it expands,” Keller said. “We’d like to come down here every year. And hopefully pet several squirrels.”

Squirrels may leap through trees, but Lucas Boursaw, left, and his sister Micah Boursaw zip past them as they came from Rainier to try out the new, larger zip line at Squirrel Fest.

Adam Gaston pops up from the sidewalk to snap up a piece of tossed candy during the parade opening the day-long Squirrel Fest activities at the Civic Center in Longview.

Caden, left, Cody, center, and Maliya Larimore of Silver Lake were some of the first kids to make a squirrely photo at Squirrel Fest.