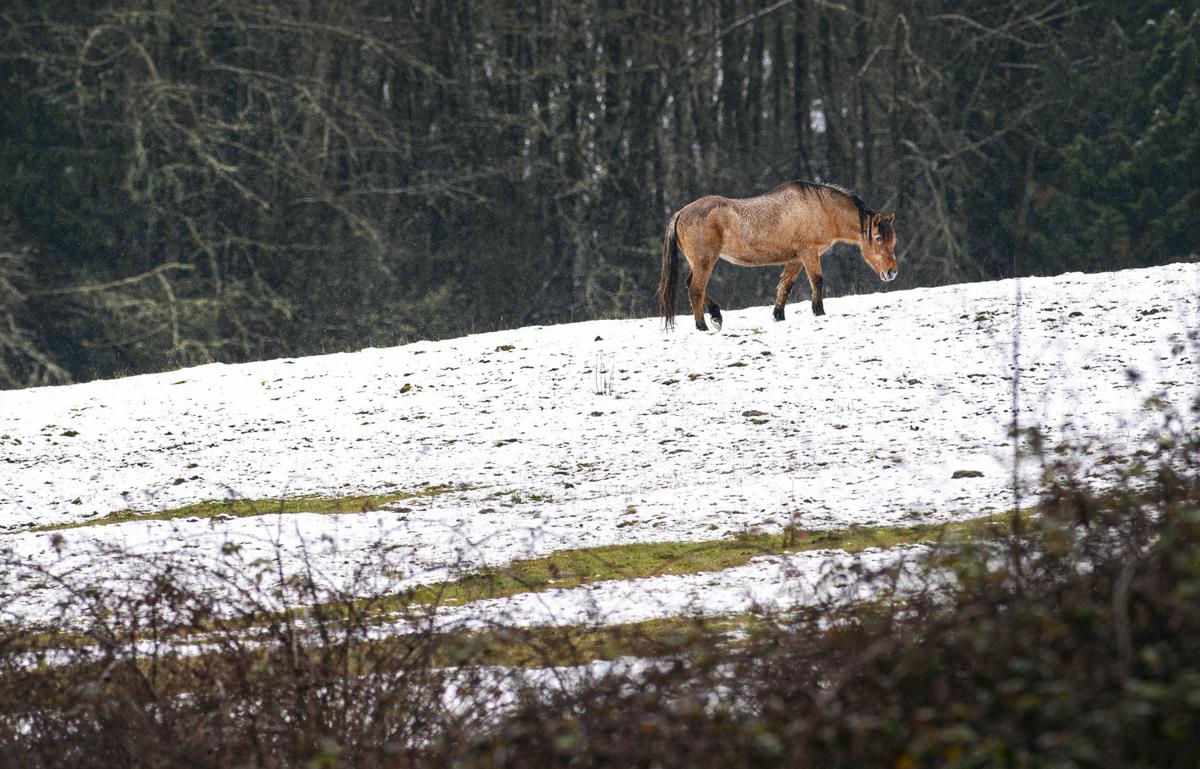 Trudy the Kiger mustang meanders through a snowy pasture in the Rainer hills Monday morning after the area received a light dusting.

The Green Mountain Cemetery west of Rainier got a light dusting of snow Monday morning.

Trudy the Kiger mustang meanders through a snowy pasture in the Rainer hills Monday morning after the area received a light dusting.

The Green Mountain Cemetery west of Rainier got a light dusting of snow Monday morning.

Refining and toning down its forecast, the National Weather Service predicts that lowland Cowlitz County may get about three inches of snow over the next three days, with most of it falling on Wednesday evening.

A dusting of snow powdered the hills above the Kelso-Longview area Monday morning, and the cars of commuters from hilly areas bore evidence of minor accumulations. Kelso and Kalama school district buses operated on snow routes, and Rainier School District had a two-hour delay.

School districts typically announce weather delays or cancellations before 6 a.m., but no advance closures were announced Monday afternoon for Tuesday.

Last week’s forecasts had warned that snow could be heavy by midweek as a mass of cold air dropping south out of the Fraser River Valley collides with moist air from the Pacific Ocean. However, the Weather Service and other forecasters now say those concerns are flaking out some.

“I am going to go against one of the rules of the click-baiting online world. I am not going to even hint there is going to be a big snowstorm over Puget Sound. Yes, most of you will see some flakes, but for most the ground will be barely whitened,” retired University of Washington atmospheric sciences professor Cliff Mass blogged on Sunday.

In our region, according to the Weather Service, there’s a 50% chance of daytime snow showers Tuesday and a 30% chance in the evening. Daytime highs will be around 34 degrees, while lows Tuesday night will drop into the mid-20s. There’s likely to be less than an inch of snow accumulation in the day, and less than a half inch overnight, the agency said.

Wednesday’s forecast says snow is likely after 4 p.m., with less than two inches forecast for that evening and into the night. That means most of the white stuff will come after the evening commute.

Mark Koelsch, Cowlitz County’s communications manager, said plows went out Monday morning and cleared higher elevation roads, but he was not concerned about Tuesday based on weather reports.Koelsch also said that the department was more concerned about Wednesday and Thursday, though there are no special preparations in place.

Temperatures will pick back up Thursday, the Weather Service predicts, with a high of 39 degrees and a low of 33 degrees. “Little or no” snow accumulation is expected, but it will likely rain.

As Thursday transitions into Friday, the snow level will rise to 700 feet, then to 1,400 feet by Friday evening. Friday’s high will be 37 degrees, and the low 35 degrees, with mainly rain in the forecast, according to the Weather Service.

The Cowlitz County Department of Emergency Management’s post said that by Friday, the region will be “back to good ‘ol Northwest rain.”

Get the latest Crime & Courts news in your inbox

Could you pass a U.S. civics test?