Seven wildfires — ranging within 45 minutes to two hours from Cowlitz County — are blowing smoke over the region and worrying residents that the fires — all of which are at least 100 acres in size — are approaching.

The fires, however, are affecting local air quality. The Southwest Clean Air Agency reports Longview had a moderate air quality level as of Monday afternoon, while Chehalis and Yacolt were in the unhealthy range.

An air quality advisory for the region is in effect until 6 p.m. Thursday.

Level 1 Notice – Be Ready: Residents should be aware of the danger that exists in their area, and monitor local media outlets for information. Residents with special needs should take note and begin making arrangements to evacuate. Evacuations at this time are voluntary.

Level 2 Notice – Be Set: This level indicates there is significant danger to your area, and residents should either voluntarily relocate to a shelter or outside of the affected area, or if choosing to remain, to be ready at a moment’s notice. Emergency services cannot guarantee that they will be able to notify you if conditions rapidly deteriorate.

Level 3 Notice – Go Now: Danger to your area is current or imminent, and you should leave immediately. Listen to local media, and watch for emergency personnel who may be coming by to give further instructions regarding the evacuation.

Hembree said the closest Cowlitz County area affected by the fires as of Monday afternoon was Cougar, but still far from danger.

Depending on residents’ location and the time of day, wind could be blowing smoke from any fire into their direction, Hembree said. He said, for instance, Castle Rock residents were likely seeing smoke Monday afternoon blown from the Fishhawk Loop Fire near Mist, Oregon, and not the Kalama Fire or Goat Rocks Fire, both of which are roughly an hour and 30 minutes from the city.

Evacuation orders for the Goat Rocks Fire, near Packwood in Lewis County, were raised Monday morning, according to the U.S. Forest Service, due to gusty winds and lower humidity on Sunday that fueled flames.

Areas north of Butter Creek, including Upper and Lower Timberline, Goat Rocks, River Dance and parts of High Valley are at Level 2: Be Set, which means residents should voluntarily leave or be ready to leave at a moment’s notice. The Forest Service says Packwood proper is not under evacuation status.

The fire was 5,765 acres as of Monday and 2% contained, the U.S. Forest Service reports.

While fires near Clark and Skamania counties grew over the weekend, the Kalama Fire near the Kalama Horse Camp Campground on the south side of Mount St. Helens saw minimal impact. Hembree said the wind blew the fire back toward areas already smoldering, which had less trees and brush to ignite and spread the flames.

Evacuation orders are at Level 1: Be Ready to leave from the headwaters of the South Fork of the Toutle River to south of Merrill Lake, and from the Skamania County/Cowlitz County border west 5 miles into Cowlitz County.

As of Monday, the U.S. Forest Service reports the Kalama Fire, which began at the end of August, is 493 acres and 37% contained.

The Fishhawk Loop Fire is 45 minutes southwest of Cowlitz County and about 30 minutes west of Clatskanie.

The Oregon Department of Forestry reported Sunday the fire was 120 acres and 25% contained. The fire, which is completely on state land, was 50% contained as of Monday morning, the department reports. Fishhawk Loop Road remains closed.

The Nakia Creek Fire is about an hour south of Cowlitz County and 9 miles northeast of Camas in Clark County, inside the Larch Block of the Yacolt Burn State Forest. As of Monday, the fire was at 1,565 acres with 5% contained, according to the U.S. Forest Service.

Evacuation zones shrunk since Sunday night, according to the Clark County Sheriff’s Office, reports The Columbian. Some roads have also reopened, including Northeast 53rd Street to Northeast 292nd Avenue and Northeast Blair Road to state Highway 500. Closures remain in the areas of Lessard, Ireland, Livingston Mountain, Boulder Creek and Winters. The L1000 and L1400 roads are also still closed.

The Black Hole Fire, northwest of the Siouxon Fire, was 100 acres as of Monday with no containment information available on fire.airnow.gov.

The Siouxon Fire, near where the Big Hollow Fire was located in Skamania County, was 1,792 as of Monday with no containment information available at inciweb.nwcg.gov.

The Sunset Fire, between the Siouxon Fire and Nakia Creek Fire, was 139 acres as of Monday, with no containment information available at fire.airnow.gov.

Read more about the Nakia Creek Fire, turn to A3.

There are seven active wildfires near Longview, and the proof is literally in the air with multiple air monitoring agencies issuing advisories… 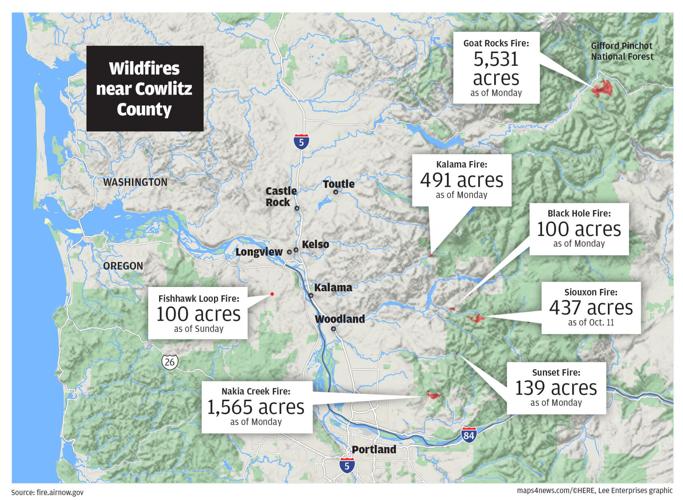 The above map indicates fire sizes as reported on fire.airnow.gov. However, inciweb.nwcg.gov reports the Siouxon Fire was 1,792 acres as of Monday. 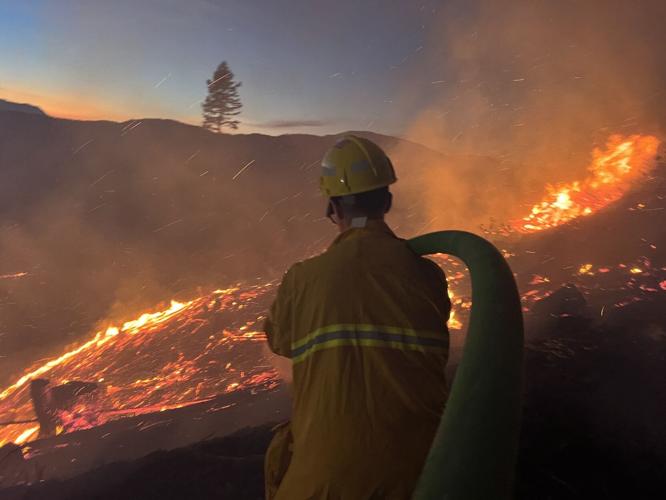 A firefighter battles the Fishhawk wildfire in the Clatsop State Forest.