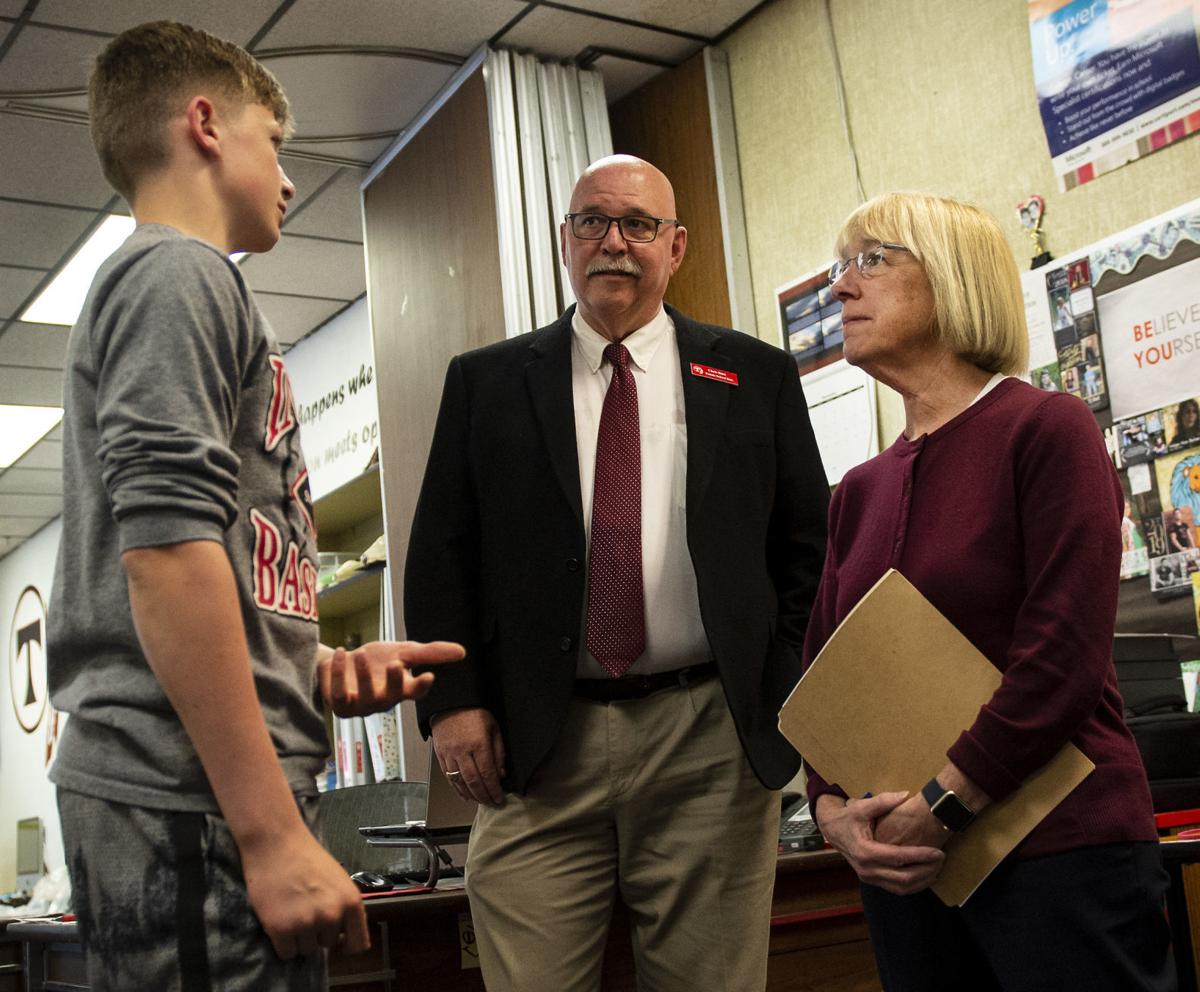 Toledo High School student Wyatt Nef, left, speaks with U.S. Senator Patty Murray, right, about what he has learned from his technology course during Murray's May 29, 2019 visit to the city in support of her proposed Digital Equity Act. 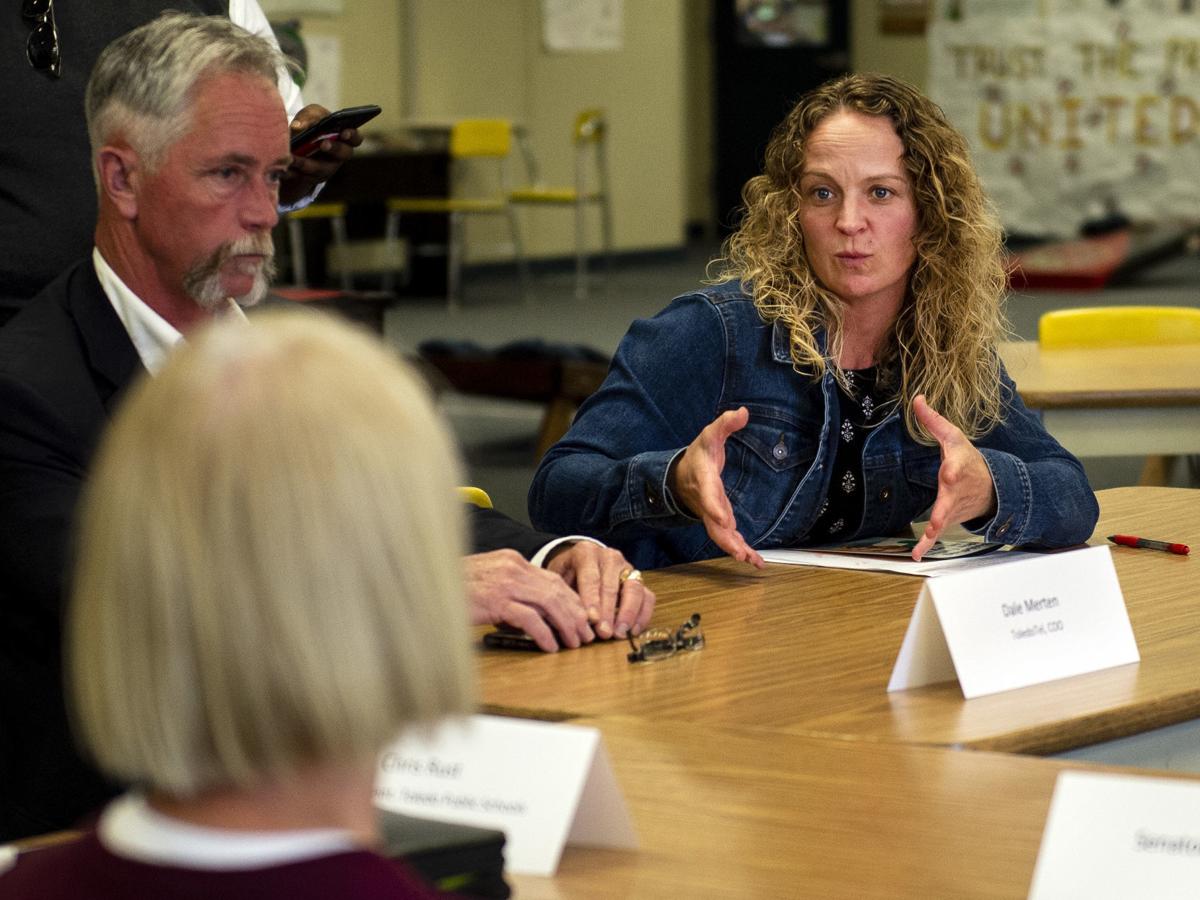 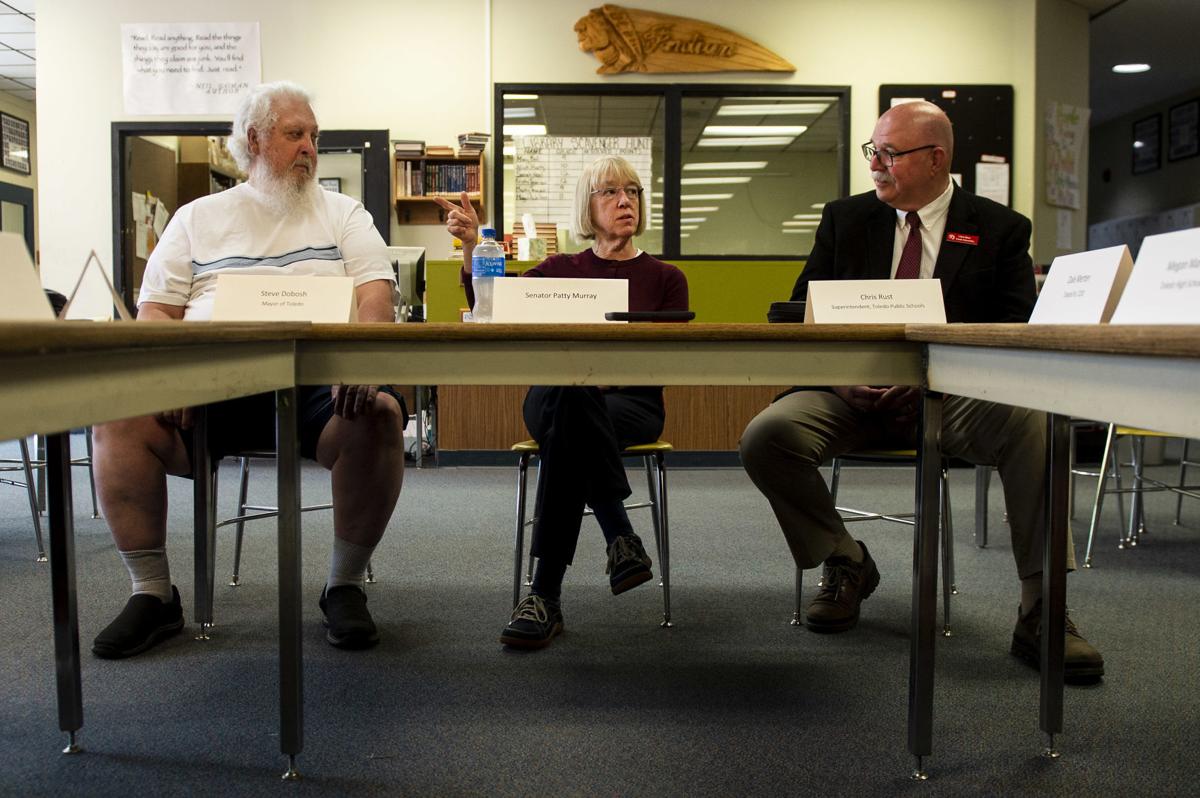 U.S. Senator Patty Murray, center, asks a question during a roundtable discussion on digital literacy in rural communities at Toledo High School May 29, 2019. Murray recently introduced a bill, the Digital Equity Act, that would create two grant programs intended to expand access to and knowledge of digital technologies.

“It would take me forever to do anything on the computer,” Wyatt, 15, told U.S. Sen. Patty Murray Wednesday. “I’d be pretty lost without Ms. Martin.”

The Washington Democrat visited Toledo High School in support of her legislation that would authorize up to $250 million in grants that teachers like Megan Martin could use to expand "digital literacy."

The bill, called the Digital Equity Act, creates two $125 million programs: one that is distributed among states and a competitive grant program for individual groups, coalitions or communities.

“We are becoming a nation of haves and have-nots when it comes to having access to digital, and it means everything,” Murray told a small group of school officials and local business owners. “For our young people especially, this is the world they’re going to live in. I want to make sure they have that capacity to go on and be competitive no matter where they live or how they get there.”

"At its most extreme, the homework gap can mean that teens have trouble even finishing their homework," the Pew Research Center said in a press release. "Overall, 17% of teens say they are often or sometimes unable to complete homework assignments because they do not have reliable access to a computer or internet connection."

The Toledo School District could use a grant to purchase new computers instead of the “hand-me-down” computers it receives through a nonprofit program called Computers for Kids, Rust said.

Communities that apply for the competitive grant program can determine what they need and how they would use the money, Murray said, but it’s about more than expanding internet access.

“Too many people don’t know how to use (internet),” she said. “The grant is for places to provide skills for teaching that.”

Dale Merten, vice president and COO of broadband service company ToledoTel, said there is a market demand for people who understand how to provide internet access.

“I have a technician job right now that I can’t fill because people don’t have the skills,” Merten told The Daily News after the forum.

He said he'd like to see a federal grant used to create a high school program for students to learn how to configure routers, ethernet cable switches and voice over internet protocol programs.

These kinds of targeted grants have been successful in the past, he said. ToledoTel received a $2.8 million federal grant in 2011 to encourage people to adopt broadband by providing a free computer and two years of broadband. Two years later, broadband adoption in the company’s 400 square-mile service area had increased from 40% to 95%, Merten told Murray.

Toledo High School already offers some digital programming classes such as Microsoft certification and videogame design, Martin said. And next year the high school will partner with Amazon Future Engineers, a program that encourages young adults in underserved and low-income communities to pursue careers in computer science.

However, the primary goal is to teach students how to "problem solve" on computers, Martin said. "Then they can apply that to other areas so even the ones that don’t use (the digital skills) for college, they can use it in life. They use it every day."

Murray said she is talking to Republican legislators who have worked with her on internet access before and expects interest from the other side of the aisle.

"Toledo is so far ahead of so many other places," Murray said. "I want Toledo for everybody."

Toledo High School student Wyatt Nef, left, speaks with U.S. Senator Patty Murray, right, about what he has learned from his technology course during Murray's May 29, 2019 visit to the city in support of her proposed Digital Equity Act.

U.S. Senator Patty Murray, center, asks a question during a roundtable discussion on digital literacy in rural communities at Toledo High School May 29, 2019. Murray recently introduced a bill, the Digital Equity Act, that would create two grant programs intended to expand access to and knowledge of digital technologies.