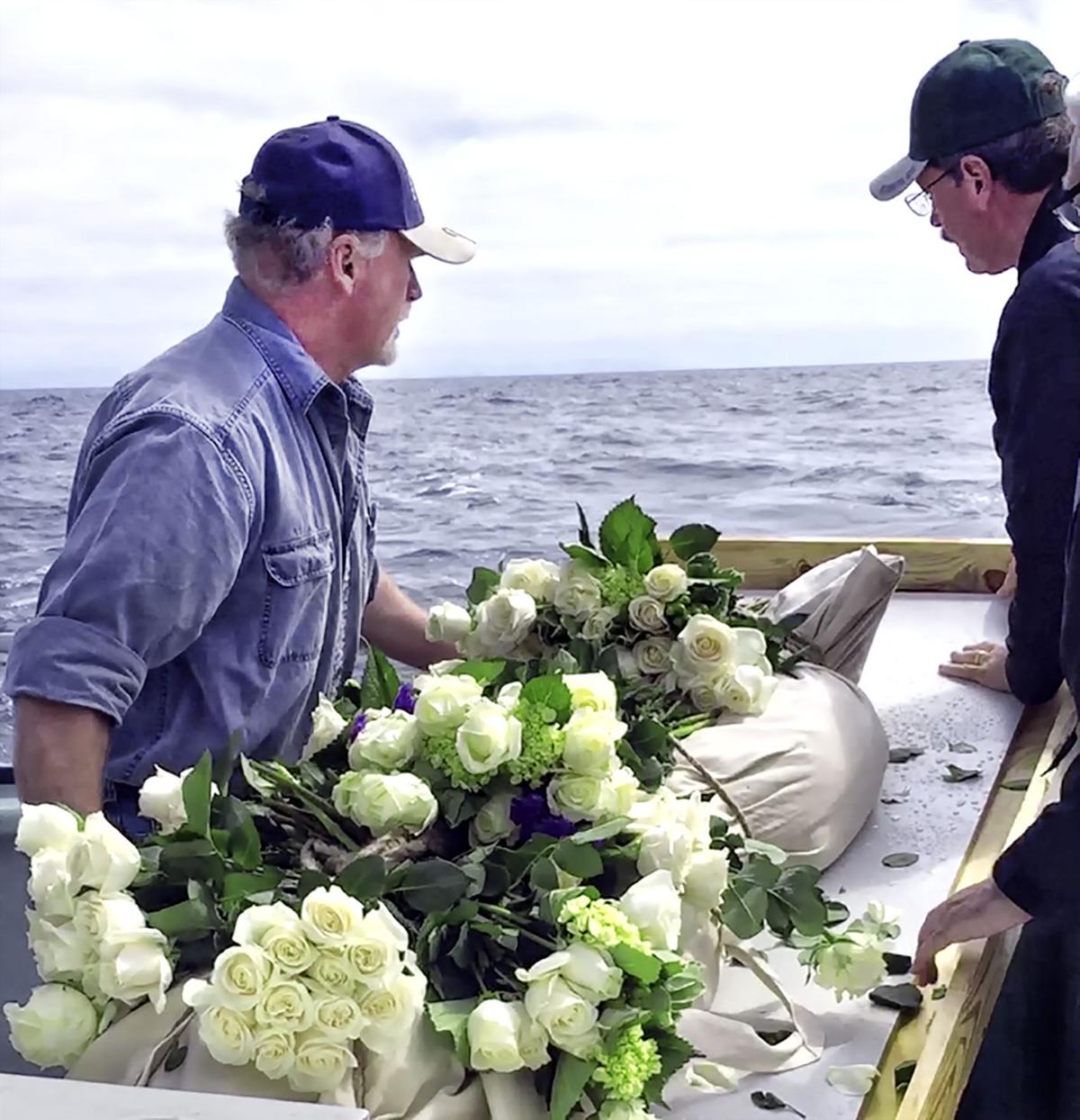 During Dennis Cleven's father's burial earlier this year, workers aboard a charter boat prepare to release the body into the Pacific Ocean off the mouth of the Columbia River. 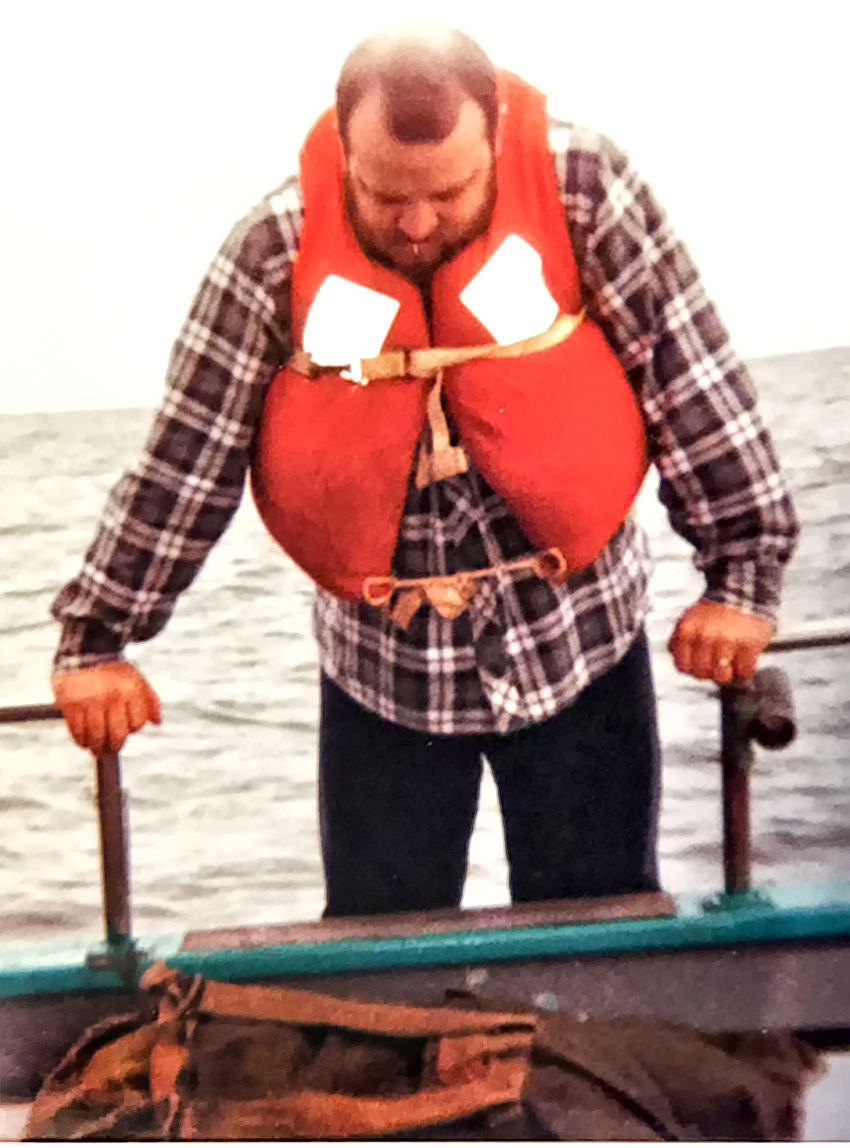 In 1984, Dennis Cleven prepares to help lower his son's body into the Pacific.

Every year on their son’s birthday, Dianna and Dennis Cleven drop a bouquet of flowers in the nearest river that flows into the Pacific Ocean.

The bouquet, they figure, eventually will reach their four-year-old son, who was buried at sea off the mouth of the Columbia River in 1984.

They pay similar respects to Dennis Cleven’s late father, who passed away earlier this year. Dennis Cleven remembers lowering his father’s body into the cold water as the roses tied to his burial shroud broke loose and floated to the surface.

The Clevens are among hundreds of families who have buried kin in the deep waters off the Columbia during the last several decades. Some choose it for deeply personal reasons, or because their kin had ties with the sea, but certainly not to save money.

The Federal Way couple buried their son in the Astoria Canyon, an undersea chasm 10 miles off the Columbia’s mouth. They chose a sea burial because their son, who died suddenly from an illness, loved the coast. The couple also found solace in the idea of visiting him every year by way of the Willamette, Columbia or McKenzie (a Willamette tributary) rivers.

“You feel a connection that you wouldn’t feel if you went to a random graveyard,” Dennis Cleven said. “Any flowers thrown in the Columbia River — all the water there goes out the mouth of the Columbia and to the Astoria Canyon.”

They buried Dennis Cleven’s late father at sea because it seemed most natural and had the least environmental impact.

“He had no superstitions, religious or supernatural beliefs,” Dennis Cleven said. “He was very concerned with the planet, and I think for him it was the concept that life came from the ocean.”

There are rules for sea burials. Whole bodies must be buried in water at least 600 feet deep. Death certificates must be provided, and everything must be biodegradable. Embalming is prohibited because the fluids are toxic.

Costs vary. A charter boat costs about $2,500, said Ron Hylton, owner of Pentilla’s Chapel by the Sea. Chapel services, which include refrigerating the body, can cost $1,500 to $2,000.

The Clevens buried Dennis Cleven’s father in a biodegradable shroud. They placed their son in a weighted army duffel bag.

“What you were supposed to do is lower the body into the water and release,” Dianna Cleven recalled. “When (Dennis) picked up the body standing on the rails, the weight took him back over the side of the boat.”

Dennis Cleven said the weight pulled him deep into the cold water before he let go.

“The life jacket brought me back up, and (my son) continued back down to the canyon,” he said. “It was very peaceful, serene.”

Other families choose traditional metal caskets, which eventually rust on the ocean floor, said Milt Gudgell, an Ilwaco charter boat operator who has been licensed by the state to conduct sea burials in Long Beach for three decades. Just this year, Gudgell has overseen 40 burials.

Survivors “don’t feel guilty about visiting the gravesite every anniversary or birthday,” he said. “(With a traditional burial) they’ve got a plot up on the hill with a headstone, and people feel guilty because they don’t go up there, and that goes on for the first few years and then soon they don’t go at all.”

Gudgell is licensed to perform the sea burials independently, but he began working with Pentilla’s in the mid ’80s after a man without a death certificate asked him to bury his son.

“(He) approached me one time, and he asked me if I did burials at sea, and I said ‘yes,’ and he said ‘I’ve got my son in a sack in the back of a car,’ ” Gudgell recalled. “At that point I said, ‘Nope, I’ll have no part in it unless you can give me a death certificate,’ and of course he left in a hurry.”

The majority of the people Gudgell lays to rest have some connection to the sea, he said. The first call he had was for a retired submariner who drowned in Canada.

The entire process, including the boat ride, can take five to seven hours. Poor weather can make it longer.

“Consequently someone has to do it. It’s service,” Gudgell said.

“The ones we’ve done principally are gentleman that served in the Navy, and that’s the way the Navy does it when they’re out at sea.”

There are exceptions, though, such as the Clevens’ son, whose only connection to the sea was trips to the coast. Dennis Cleven said there’s a feeling of peace upon returning from an ocean burial.

“It’s very quiet out there. Everything stops, and the actual burial service is conducted, and on the way back in it’s so peaceful,” he said.

He added he anticipates someday he and his wife also will be laid to rest deep in the Astoria Canyon, alongside family.

“I think by burying our son we’ve been anchored there.”

During Dennis Cleven's father's burial earlier this year, workers aboard a charter boat prepare to release the body into the Pacific Ocean off the mouth of the Columbia River.

In 1984, Dennis Cleven prepares to help lower his son's body into the Pacific.