This is the 11th story in our ongoing series marking the 40th anniversary of the eruption of Mount St. Helens on May 18, 1980. Stories appear in a collection on TDN.com as they appear in print and online.

Scientists pioneered volcano forecasting at Mount St. Helens, though they can’t yet predict exactly how volcanoes will erupt or project when eruptions will occur months or years in advance.

But emerging technologies and decades of experience may someday make those possible. Volcanologists’ ability to track volcanoes and foretell their future already has improved by light-years in the four decades since the big blow at St. Helens.

When scientists tracked the rumbling volcano in the two months before its May 18, 1980 eruption, they beamed lasers from the Timberline parking lot on the north flank toward mirrors placed around the volcano. By measuring how long the light beams took to return, scientists got a rough idea of how the mountain was bulging and shifting. Using this and other techniques, they successfully predicted the dome building eruptions at the mountain from 1980 to 1986.

Now, they use a swarm of GPS sensors to create a constantly-updating three-dimensional map of the volcano’s movement.

“Lots and lots” of data is the key to how volcano science has improved over the years, said Vancouver-based U.S. Geological Survey geophysicist Michael Poland. That GPS data from the mountain removed ambiguity from the ground’s movements, and scientists went from taking measurements once a month, and some cases only once a year, to getting updates “24/7.”

“Right now in volcanology, we’re sort of like the weather forecasters of many, many decades ago,” Poland said. “Where might we be when we understand the physics better?”

He mused that one day it might even be possible to detect earthquakes from space: “It’s totally impossible (now). But that’s the kind of thing that I could imagine 20 years from now, some smart people get together and figure out.”

Poland, 44, and his mentor, recently retired USGS geologist Daniel Dzurisin, recently talked to TDN about the evolution of volcanic studies and some of the new technologies that will lead to better forecasting and understanding of volcanic hazards.

The most interesting planet

Dzurisin, 68, retired from the USGS Cascades Volcano Observatory in Vancouver in January as one of only two scientists still on staff who’d worked at the mountain since its 1980 eruptive cycle.

In college and graduate school, he wrote papers on planets like Mercury and Mars, and thought he might be one of the first astronauts to land on the Red Planet. But the Earth proved compelling too. His first post-grad school assignment was at the Hawaii Volcano Observatory, where from 1977 through 1981 he studied the trembling summit of Hawaii’s Kīlauea volcano. Dzurisin knew then that volcanoes would be his future.

As a 4-year-old child, Poland’s interest in volcanoes was sparked when Mount St. Helens erupted. He grew up near Mount Shasta in Northern California and relished chances to see lava rock while camping in the mountains. He’d considered a career as a detective, and he naturally turned to sleuthing the mysteries of the geologic past and the challenge of predicting volcanic eruptions.

While studying geology at UC Davis, he wrote to Dzurisin for a lead on field work. Dzurisin pointed him to a mystery at the Medicine Lake Volcano in Northern California: Researchers knew the volcano was sinking, but they didn’t know why.

“You’re in this beautiful place, you’re asking a question that no one knows the answer to,” Poland said. “There’s no story until you go out there, collect all the bits and pieces and put them together.”

Poland did a survey in 1996 and learned that the volcano wasn’t just sinking. It was slowly being drawn inward, like a black hole was sucking it down.

Poland didn’t find a conclusive explanation — but he was hooked anyway: “It’s beautiful, but I feel an affinity for the place. I feel like it’s where I started.”

Dzurisin hired Poland after he received his doctorate from Arizona State University. Poland worked at the CVO for three years, spent 10 in Hawaii and came back to Vancouver in 2015. In that time, he’s worked using satellites to create highly-detailed topographical maps at Mount St. Helens, Kīlauea, the Yellowstone caldera and other volcanoes around the world. He is also the scientist-in-Charge at the Yellowstone Volcano Observatory.

“I’m not starting in the same part of the tack that Dan started in,” Poland said. “I’m starting well down, because of all the race he’s already run. And the people that are coming up now are going to be starting way ahead of where I started.”

Poland’s recently been researching how extremely small variations in gravity can reveal secrets of what’s under the earth. A small increase in the tug of gravity could, for instance, indicate that molten rock or water is flowing into cracks underneath a volcano.

In the last decade, a handful of surveys at Mount St. Helens has revealed that gravity appeared to increase slightly as the mountain recovered from its 2004-08 eruptive period, and has mostly plateaued since then, Poland said.

There seemed to be something moving in a few kilometres beneath the surface of the mountain, Poland said, but scientists don’t yet know exactly what it was.

The gravity measurements, which typically use highly sensitive springs, are still uncertain, and Poland is hopeful that more precise, consistent and affordable instruments will be developed in the next few years. Currently, one gravity meter can cost tens of thousands of dollars, he said.

But “there’s a new generation of equipment that doesn’t use springs,” Poland said. “This is incredibly cool: They’re atomic, in that rather than measuring the spring and how it gets pulled or relaxed, this thing throws a whole bunch of atoms into the air, and measures how they fall.”

“When we draw these cartoons (of volcanoes), they’re all the same,” Poland said. “A triangle with a straw that goes down to a red balloon. That’s preposterous. That’s not how it looks. There are pockets of gas and crystals. It’s mushy in some places and solid in other places.”

“It’s a bit like the high school physics problem,” he continued. “You’re trying to solve some question, and they’ll say, ‘ignore friction,’ or ‘ignore gravity.’ Well, it’s easy to solve when you ignore things that are real, (but) those real things have real consequences.”

Predicting the next one

Given their rudimentary technology and assumptions about the volcano, its infamous May 18 “lateral blast” surprised most scientists studying it at the time. The building pressure forced the north face of the mountain to fail in a massive landslide, uncorking the mountain and blasting the landscape for dozens of miles north with scorching gasses and hellish winds.

Geologists had crawled all around the mountain for years prior to the eruption, but they never found evidence that it had previously generated lateral explosions, Dzurisin said. Still, in the weeks immediately preceding May 18, Penn State geologist Barry Voight had raised the possibility that the bulging volcano could erupt laterally.

In 1980, a lateral blast “was recognized as a possibility,” Dzurisin said. “But if you look at all of the volcanoes around the world, it’s actually much more common than has ever been realized. … I think our model about how volcanoes grow has fundamentally changed.”

But the lack of public discussion about that possibility showed why scientists need to be do more than just research. Dzurisin said it’s important for scientists to communicate with public officials and first responders and ensure that the public knows what to do in an emergency.

Thousands of lives and hundreds of millions of dollars have already been saved by advancements made since the 1980 eruption, he said: “After all, we are public servants.”

Scientists took lessons from Mount St. Helens back to mountains like Shasta — “and what do you know,” Poland said, Mount Shasta was discovered to have endured one of the largest landslides on Earth in the last couple of million years about 300,000 years ago. Geologists recognized the features after witnessing the large landslide at Mount St. Helens.

A new frontier for volcanologists is machine learning, Poland said. Computer programs can process the new mountains of data faster than humans ever could and can be taught to look for patterns that humans wouldn’t pick out.

“What if there is something beginning (at Mount St. Helens), so subtle ... we could never detect it? By allowing the computers to look at all the data ... it might pull out things that we’d miss.”

Dzurisin said he anticipates eruption prediction will get better. The success of predicting the eruptions of the early 1980s and 2004-08 event opened the door to other dreams, Dzurisin said.

“Scientists began to think, ‘Well gosh, maybe prediction is not impossible. We need to look at that.’ "

That raises the big question: Will scientists ever be able to precisely forecast the time and scale of the next disastrous eruption at Mount St. Helens or elsewhere?

“We can start taking bite size chunks out of this problem,” Poland said. “Maybe, once an eruption does start, can we predict where lava is going to go? ... I see us as nibbling away at the edges of this thing ... getting closer and closer to the candy center.” 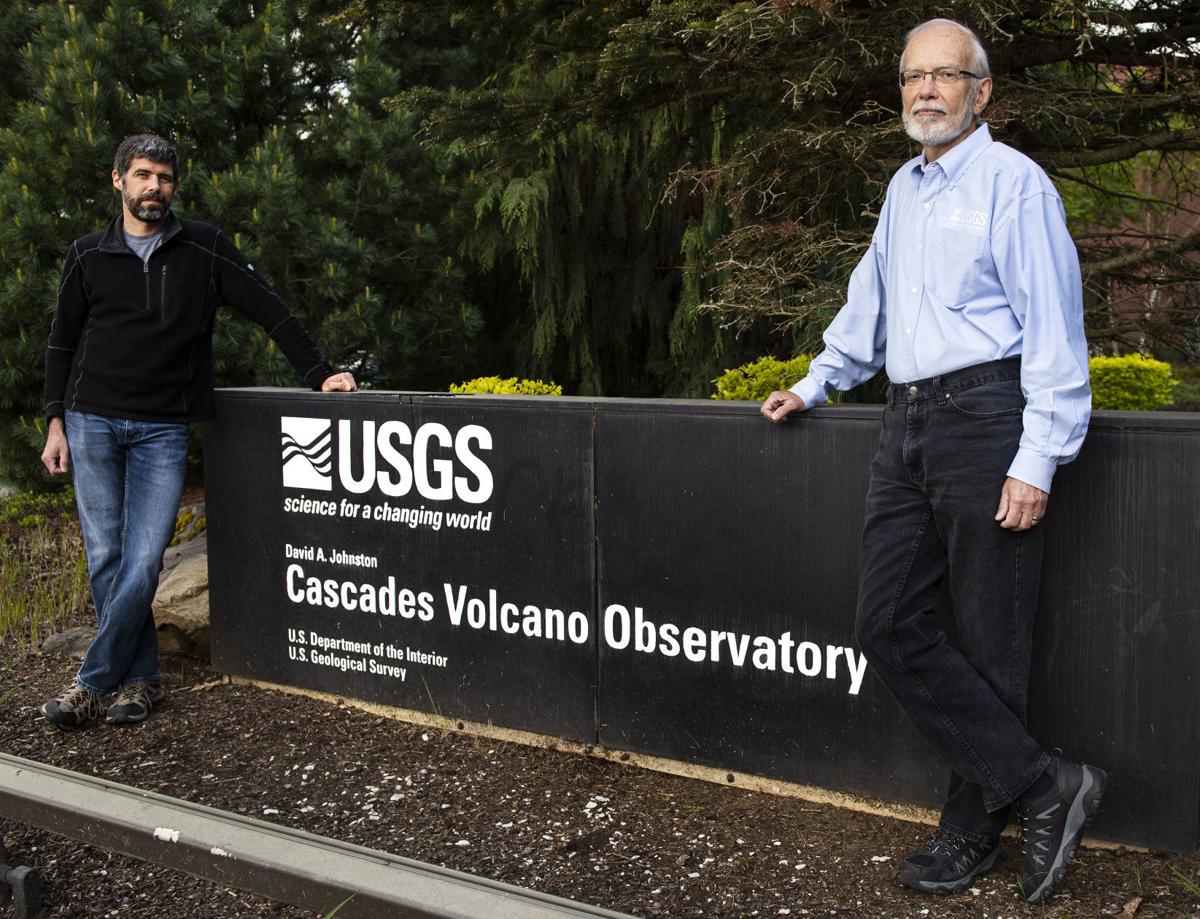 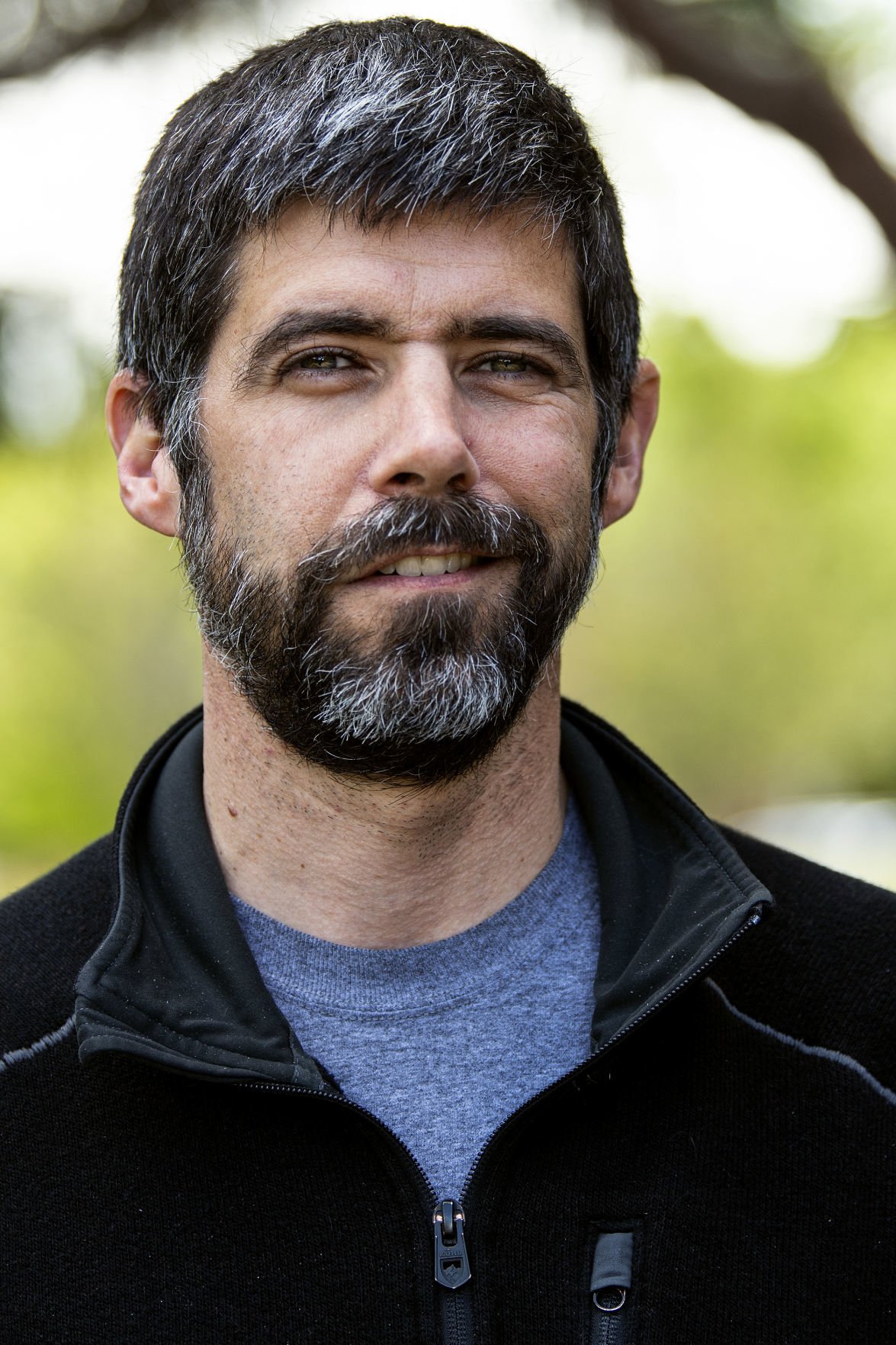 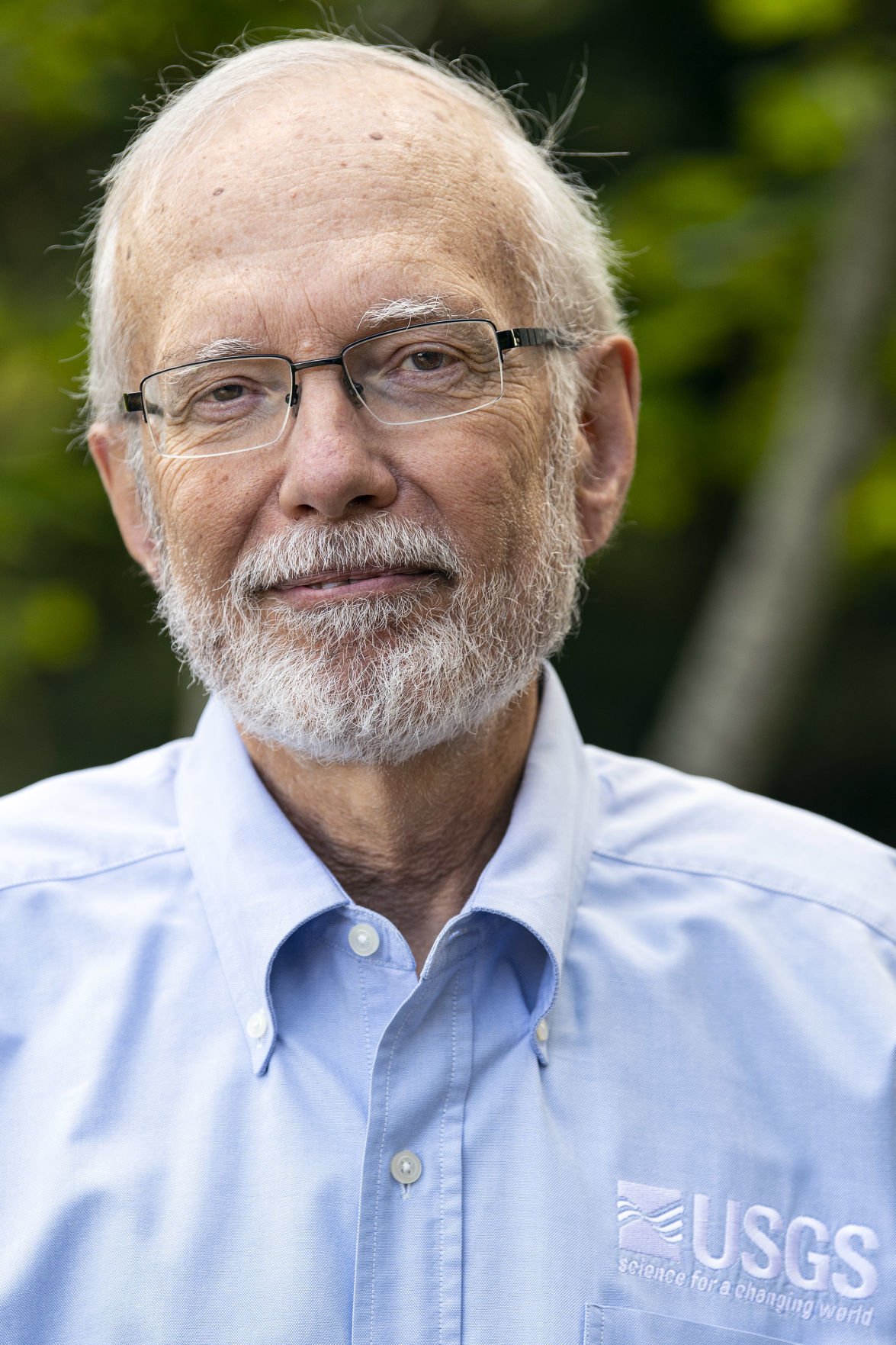 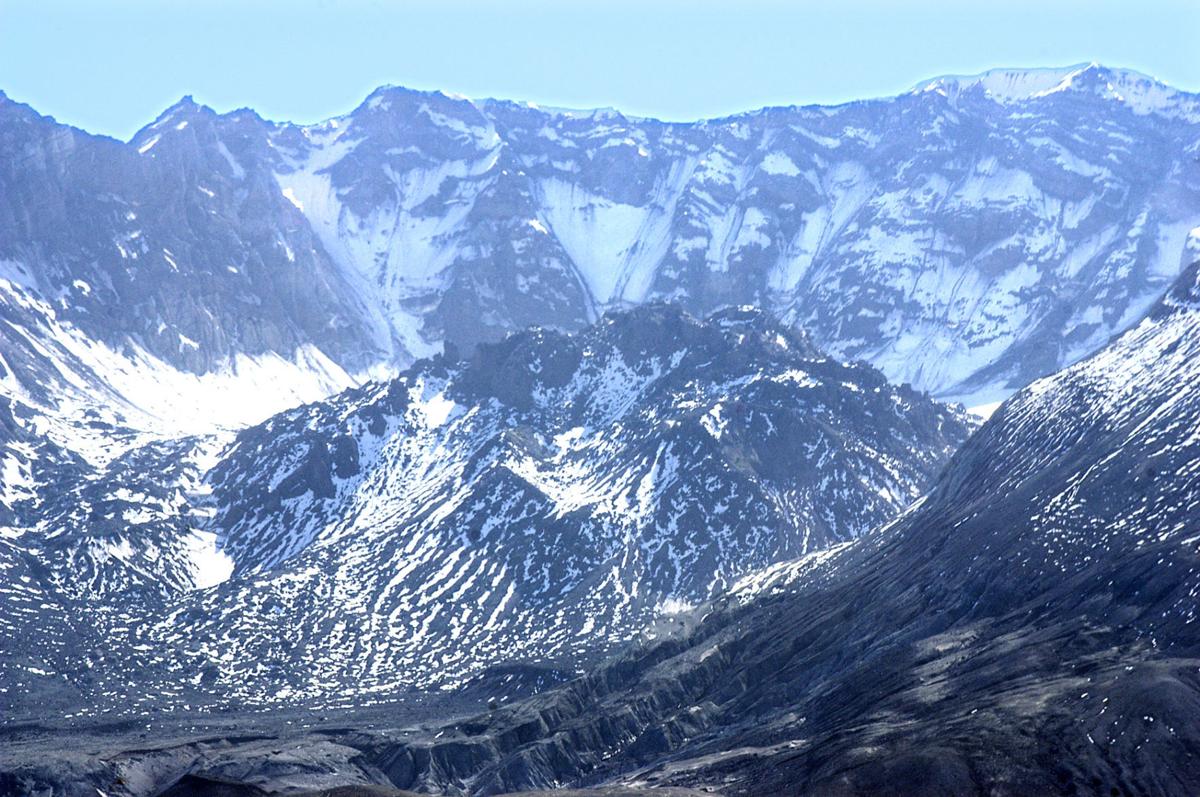 This 2008 photo shows the continuing growth of the magma dome within Mount St. Helens’ crater. 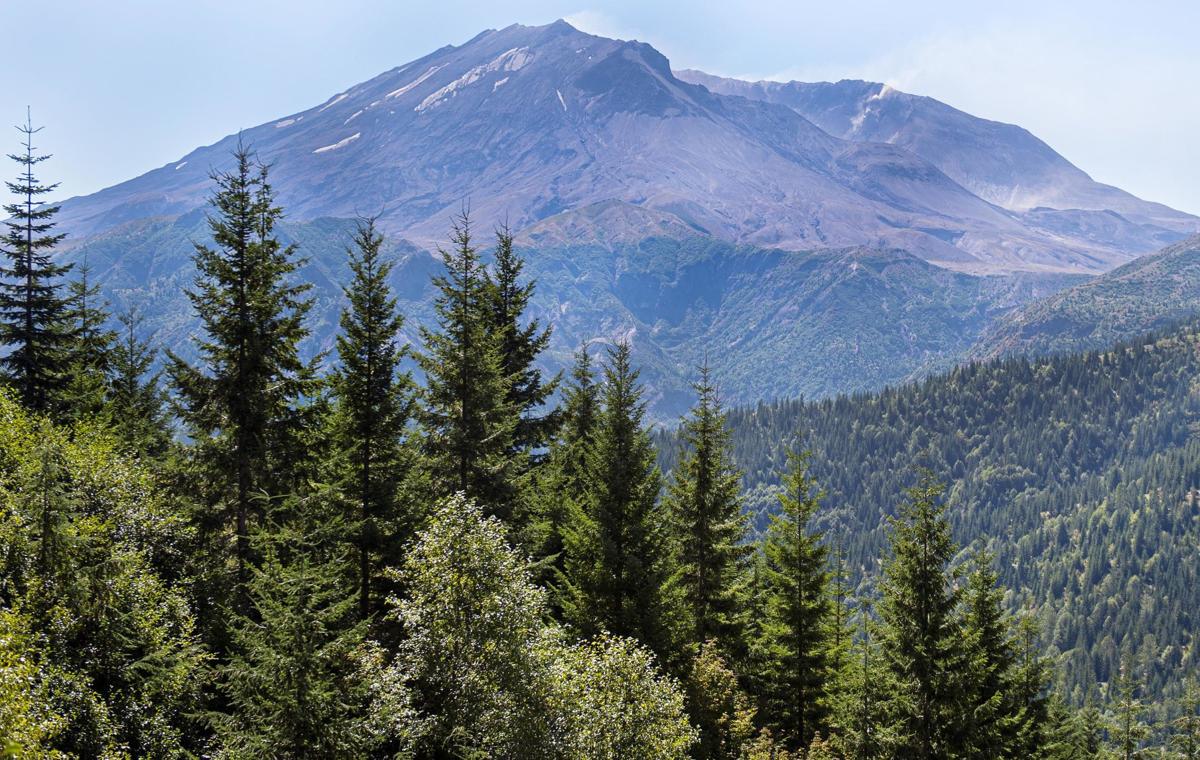 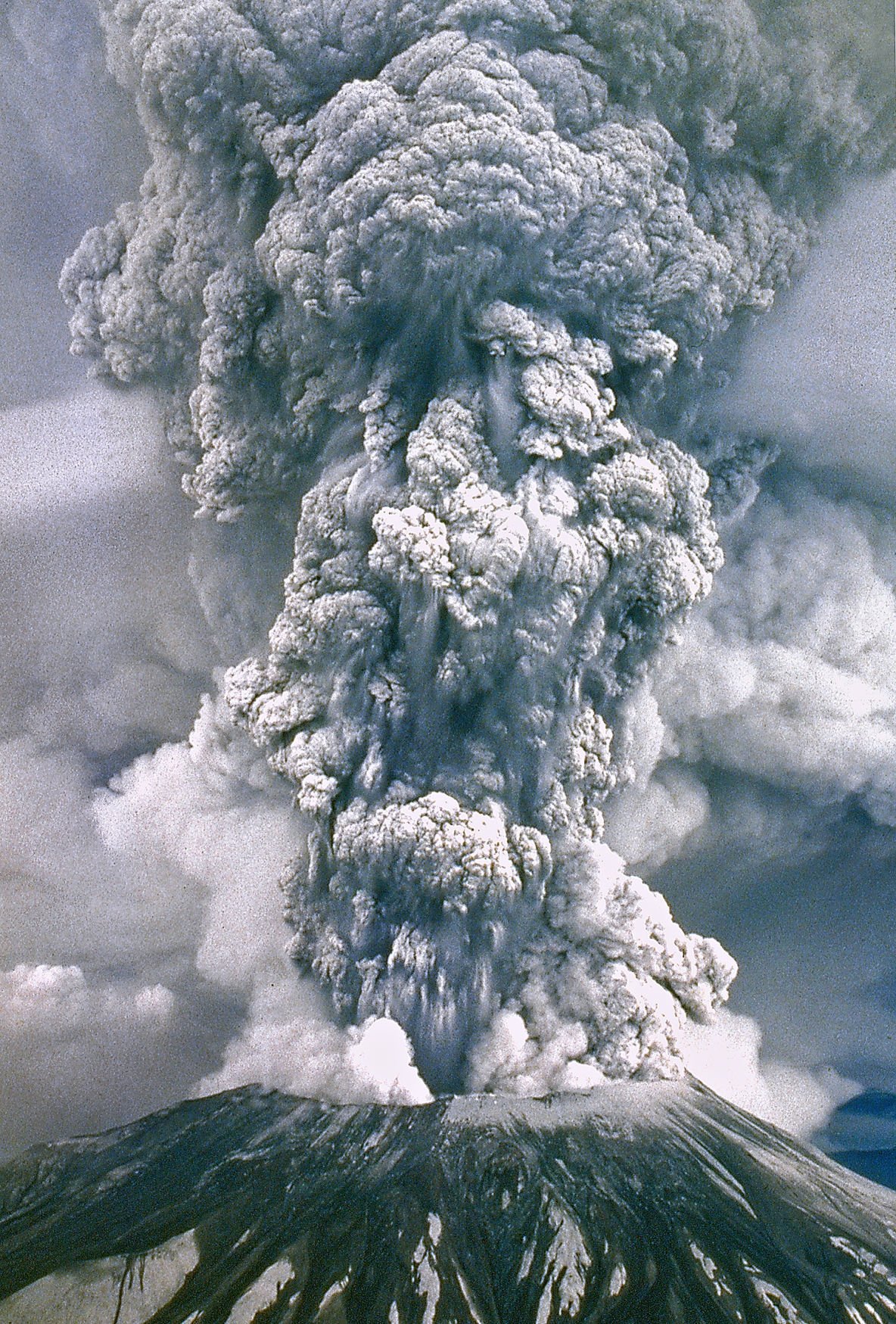 TDN photographer Roger Werth's iconic photo of the Mount St. Helens eruption on May 18, 1980 appeared on the cover of Time magazine and in publications all over the world.