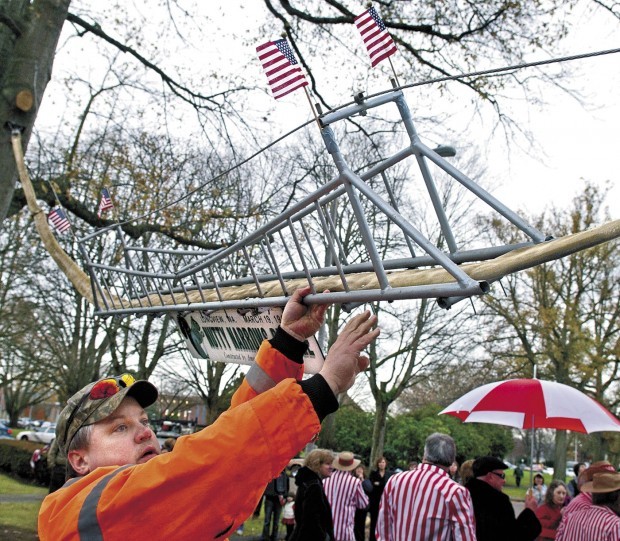 The only thing missing was the marching band.

Speeches, prayer, cheerleaders, a ribbon cutting and a release of doves heralded Monday afternoon's reopening of the Nutty Narrows Bridge for squirrels at its new location above Olympia Way less than a month after the city landmark was taken down for cleaning and repairs.

The Longview Sandbaggers Club, known for elaborate jokes and trademark red-and-white striped jackets and umbrellas, put on the 15-minute tongue-in-cheek ceremony at Olympia Way and 18th Avenue before reconvening at the Monticello Hotel for cake and squirrel-themed cocktails. About 40 people watched as the Longview Parks Department attached the bridge to stout trees on opposite sides of Olympia Way using a cherry picker.

"I have been asked to bless a lot of weird things in my life, and this is at the top of my list," said Father Richard Green of St. Stephen's Episcopal Church in Longview.

Longview Mayor Kurt Anagnostou recounted how the bridge was built in 1963 by local builder Amos Peters, who "saw the carnage and destruction of our furry friends" and wanted to provide them safe passage above the busy street.

"San Francisco has its street cars, Seattle has the Space Needle, but we in Longview have the only squirrel bridge, and it's world-renowned," Anagnostou told the crowd after shaking hands with Peters' son, Roger Peters.

The bridge was designed by architects Robert Newhall and LeRoy Dahl. Donald Kramer did the structural engineering and Peters and Bill Hutch built the 60-foot span for $1,000 with aluminum pipe and fire hose. The Associated Press picked up the story, which was printed in newspapers around the world.

In 1983, after Peters took down the bridge for repairs and repainted the sign, the bridge was rededicated in a ceremony with 300 children and Disneyland guests Chip ‘n Dale and Mickey Mouse. When Peters died in 1984, the city placed a 10-foot wooden squirrel statue on the Longview Library grounds in his memory.

The bridge was moved in 2005 to the Civic Center traffic circle when one of the trees anchoring it was removed due to disease. Its newest location is just "three trees away" from its original spot over Olympia Way, said Sandbagger Dwain Buck.

Among the onlookers at the ceremony was Kelso resident Vicky Mies, 45, who came in memory of her brother, Bill Mies. Every time Bill would visit her from his home of Sacramento, Calif., he wanted to visit Longview's squirrel bridge, Mies said. Her brother wore his Nutty Narrows sweatshirt for years until it wore out, and then his sister bought him a new one.

When Bill died three years ago at age 44, the family buried him in his Nutty Narrows sweatshirt, she said.

"He loved squirrels," Vicky Mies said. "This is why I came today, for him."

A history of the Nutty Narrows

The Nutty Narrows Bridge is a local landmark built in 1963 by contractor Amos Peters, who was dismayed by the number of squirrels who died in …

The Longview Sandbaggers Club is sponsoring a photo and art contest for kids and teens, with a $50 grand prize for the best photo or drawing o…