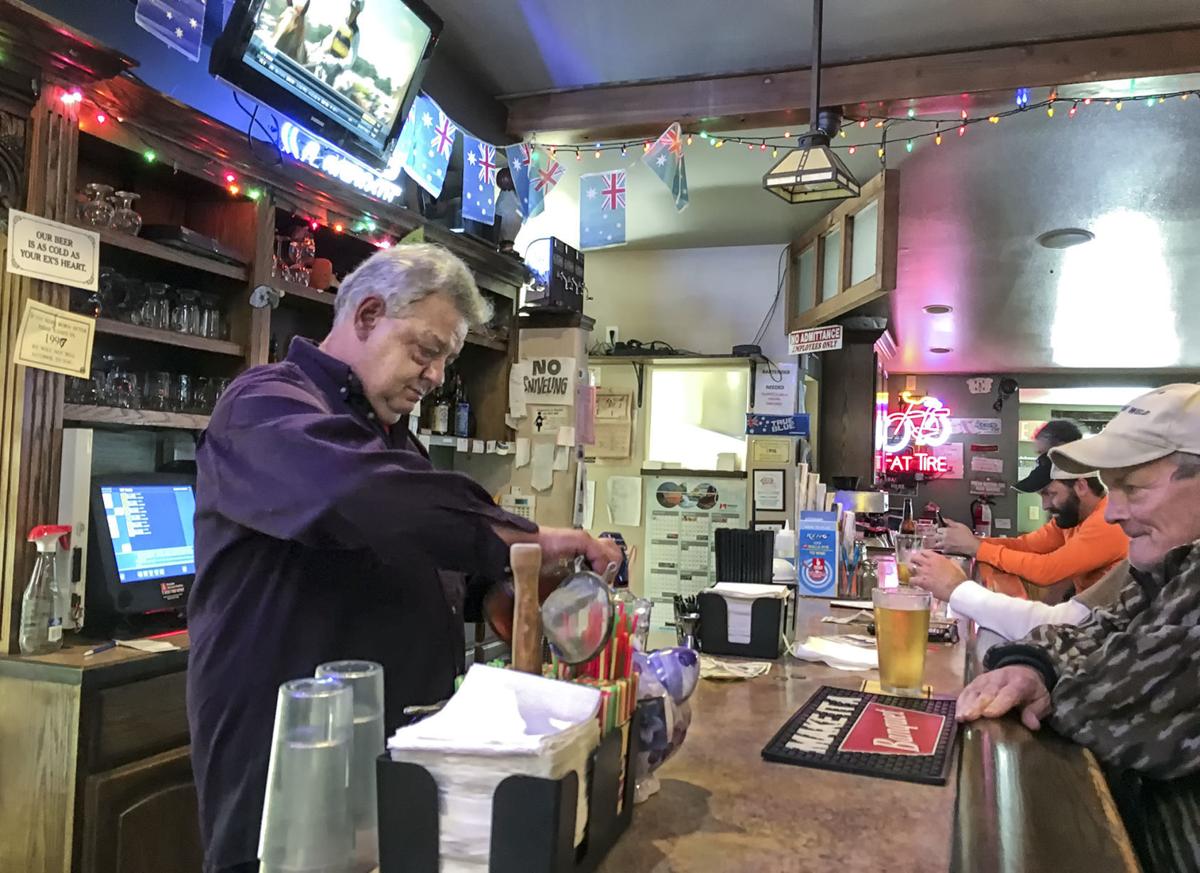 Bartender Phil Walker (left), who has worked at the Goble Tavern for more than a decade, mixes a drink Thursday. 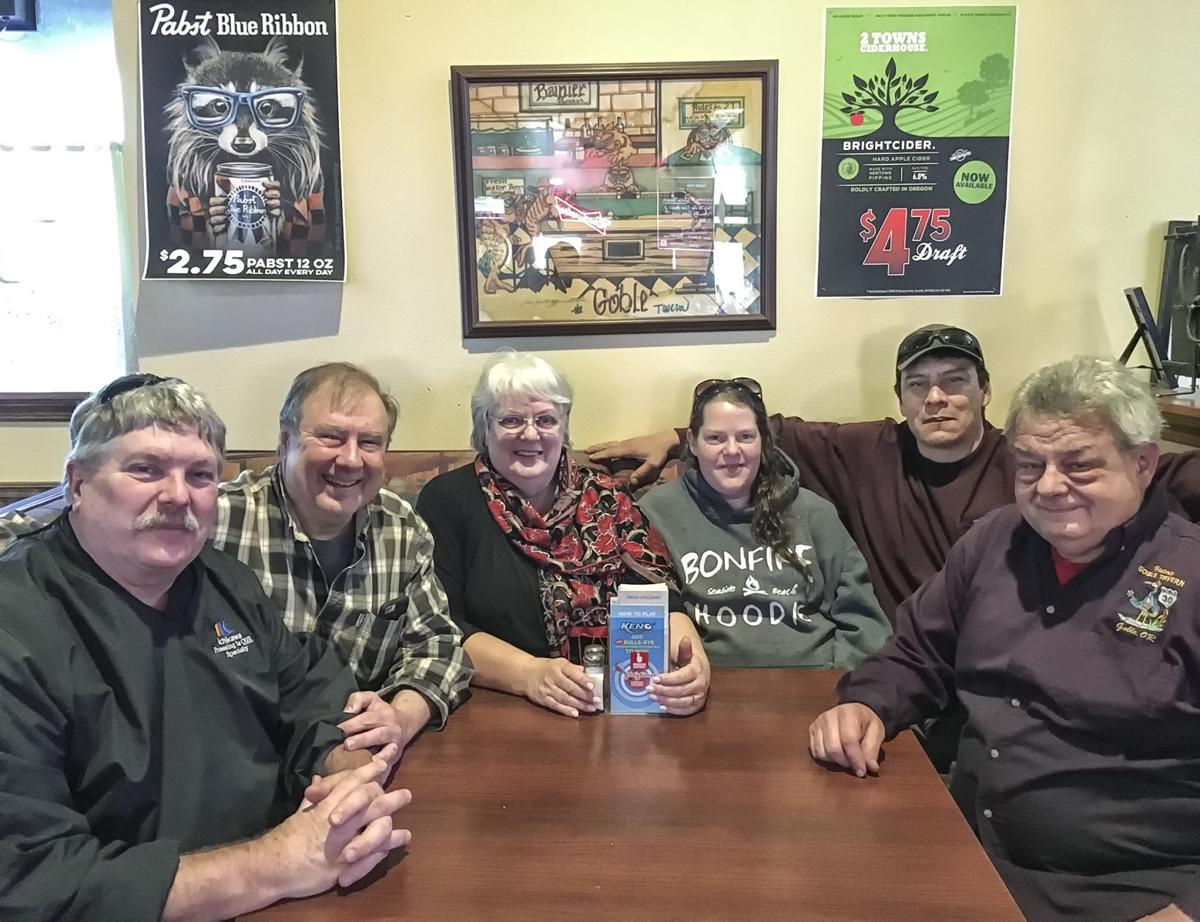 Goble Tavern's owners and most of the staff sit in one of the bar's booths. (From left to right: Bill Morrill, in charge of specialty events; co-owner Mike Avent; co-owner Meryl Head; bartender Carla Workland; co-owner Tim Navarro; and bartender Phil Walker)

GOBLE — Just over a decade ago, the Goble Tavern was so dilapidated that women had to be pulled out of the restroom because one end of the building was slumping into a ravine, and the floor was tilted badly downhill.

But this week, the cozy, if remote watering hole was named “Best Small Town Bar” in Oregon by Thrillist, a nationally prominent food/travel website.

“I suppose when you first come in here, you may feel a little out of place. But after you’re here a couple times, you feel just like part of the group,” St. Helens, Ore. resident Rex Cross said of the bar Thursday afternoon.

On Monday, Thrillist listed its favorite small-town bar from every state. The site’s reasons for including the Goble Tavern included its history — the three co-owners confirmed that the mother of country legend Willie Nelson used to work there as a bartender — as well as its spacious backyard garden and welcoming atmosphere.

The tavern didn’t always have a stellar reputation. Oregon penalized the bar throughout the ‘90s and ‘00s for offenses such as allowing workers to be intoxicated on the job and serving inebriated customers.

Furthermore, one side of the bar had settled 13 to 14 inches into a nearby ravine.

“The girls’ restroom was right (over the ravine). There were times when girls would have a little bit too much to drink, and they’d go to the restroom and guys would have to pull them out because it was so sloped,” said 40-year regular Don Kielblock of Warren.

“We had a singer who had their music on a stand. They’re playing and people are dancing and she’s trying to read her music, and her music is just (bouncing up and down),” said current co-owner Meryl Head.

In 2006, Head and two other Rainier businesspeople, Mike Avent and Tim Navarro, purchased the Tavern. They then spent nearly a year stabilizing and remodeling the building and adding new amenities such as video poker and liquor.

The mid-sized bar is spacious, yet homey with decorations commemorating the tavern’s past on its walls. There’s also plenty of Australian-themed knick-knacks throughout, a nod to Head’s hometown of Adelaide.

Despite the bar’s then-dingy condition, Avent said he was always drawn to purchase the bar for its rich history and reputation as a spot for great live music.

“We’ve always looked at opportunities and properties and stuff like that. We saw this as an opportunity,” said Avent, a former Rainier councilman and current Port of St. Helens commissioner. “Whenever we see something that’s kind of old and run-down, we think about potential. That was one of the things that I found appealing about it it – it had an aura of just a good time.”

The trio had also previously remolded the Evergreen Tavern in Rainier (they currently own that bar, Luigi’s Pizza in Rainier and the Alston Pub and Grill along with the Goble Tavern).

According to the owners, although the changes alienated a few long-time customers, the revamped Goble Tavern has been a success overall.

“The first night we opened, this place was packed,” Head said. “We didn’t have a band organized, but these guys came in and all of a sudden we had an eight-piece band there. They all went home, got their instruments, and came back.”

Kielblock, who was the former manger at the now-demolished Trojan Nuclear Plant in nearby Prescott, is a long-term customer who has stuck around, partly because of the bar’s safe, comfortable vibe.

“One of the things I appreciate is that there aren’t any crazy stories,” he said. “My wife can come here and I won’t worry about her, because (the bartender) Phil will not let anything go on here that’s not appropriate.”

Cross said what he enjoys about the tavern is its no-man’s-land location between Rainier and St. Helens.

“You’re out of town from both towns, so it’s kind of like a getaway bar,” he said. “You can come out here and meet people you don’t see on the regular basis.”

Both Kielblock and Cross are also members of a 60-member cigar club, which meets monthly to smoke and roast meat in the tavern’s backyard. They’re also hosting a crawfish-feed fundraiser for the Rainier Food Bank May 5.

The tavern has traditionally embraced Goble’s anonymity; The owners said “Where the Hell is Goble?” has been a slogan for both the bar and the tiny community for a while. The tavern used to sell stickers with that slogan.

“Maybe that’s the thing that comes out of this (Thrillist) story, maybe a few people will know where in the heck Goble is now,” Avent joked.

According to the owners, Thrillist’s article has brought in a few new customers in the short time since the article appeared.

“Our bartenders have noticed that people have come out and said, ‘We saw that you guys were rated as number one, and we wanted to come out and see it,’ “ Avent said. “We haven’t taken a count or anything like that, but we feel like there’s been at least a few.”

Although the bar might now have the eye of the national media, Kielblock said what he likes about the Goble Tavern is how simple it is.

“I don’t know if there’s anything spectacular, but maybe that’s the good thing about the bar,” he said.

Police are searching for a suspect in a homicide investigation involving a man found near the Cowlitz River in Kelso this week.

Some people even told staff that if their pet died it was all their fault and accused them of not caring about the animals, Stephens said, which “damages the entire veterinary team.”

Bartender Phil Walker (left), who has worked at the Goble Tavern for more than a decade, mixes a drink Thursday.

Goble Tavern's owners and most of the staff sit in one of the bar's booths. (From left to right: Bill Morrill, in charge of specialty events; co-owner Mike Avent; co-owner Meryl Head; bartender Carla Workland; co-owner Tim Navarro; and bartender Phil Walker)