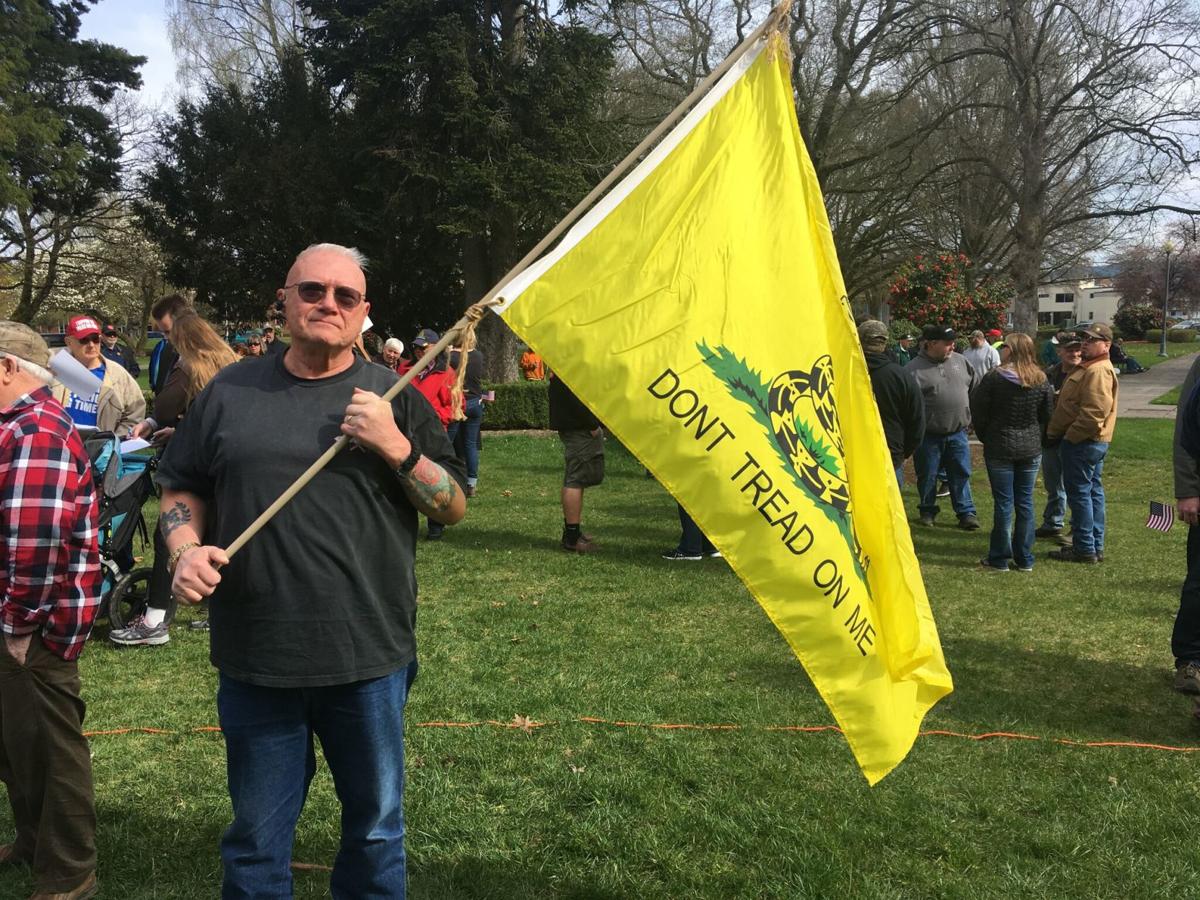 65-year-old Stan Mourning of Kelso displays a Gadsden flag depicting a rattlesnake and the words 'Don't Tread On Me' at the 'Stand for The 2nd' event held in Longview's Civic Circle on March 31. 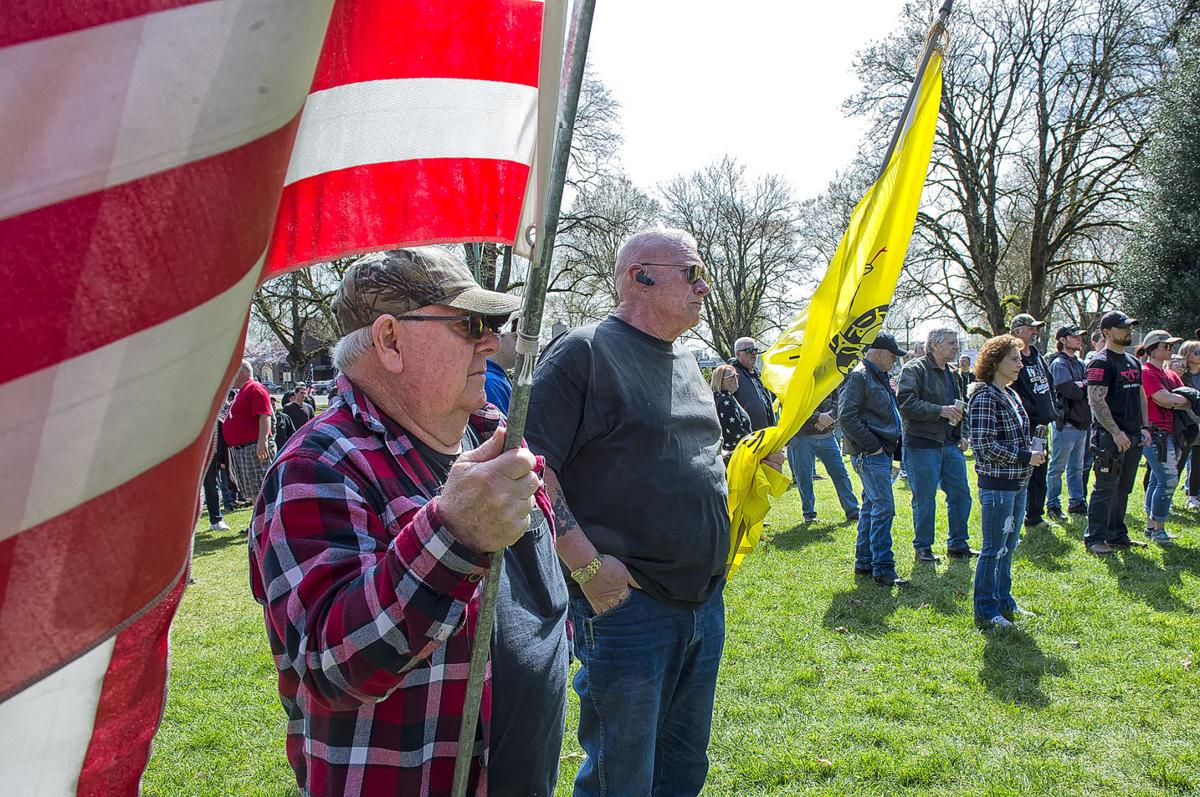 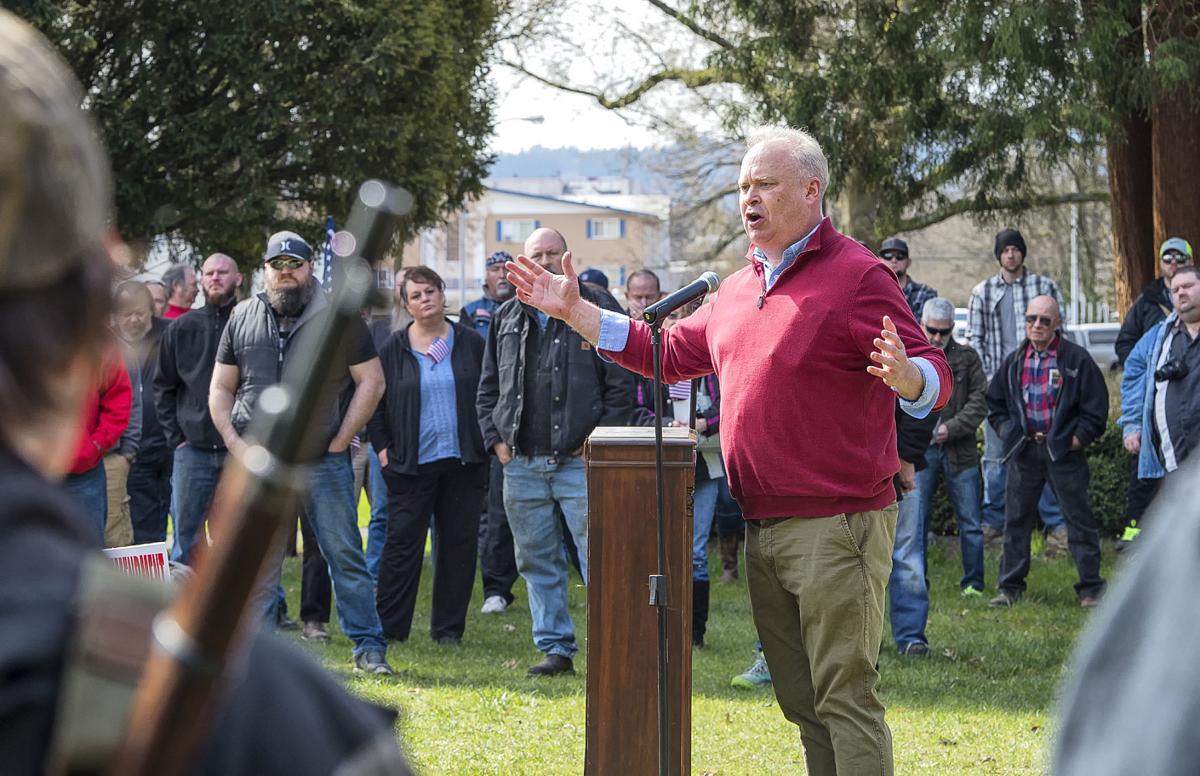 State Rep. Jim Walsh, R-Aberdeen, has a receptive audience as he talks about Second Amendment rights to a crowd of nearly 400 people gathered at the Civic Center. 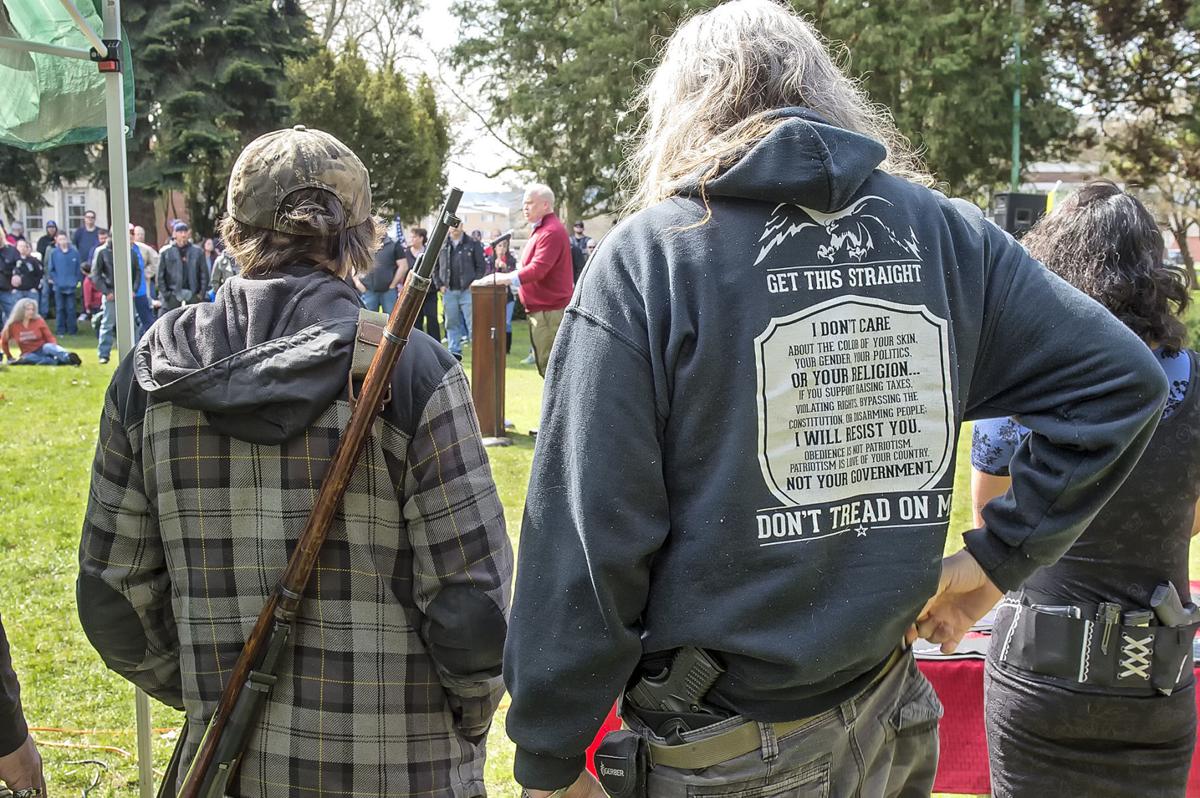 Everyone who came to support the Second Amendment didn't bring a rifle or handgun, but there were plenty of them throughout the crowd listening to speakers at the Civic Center. 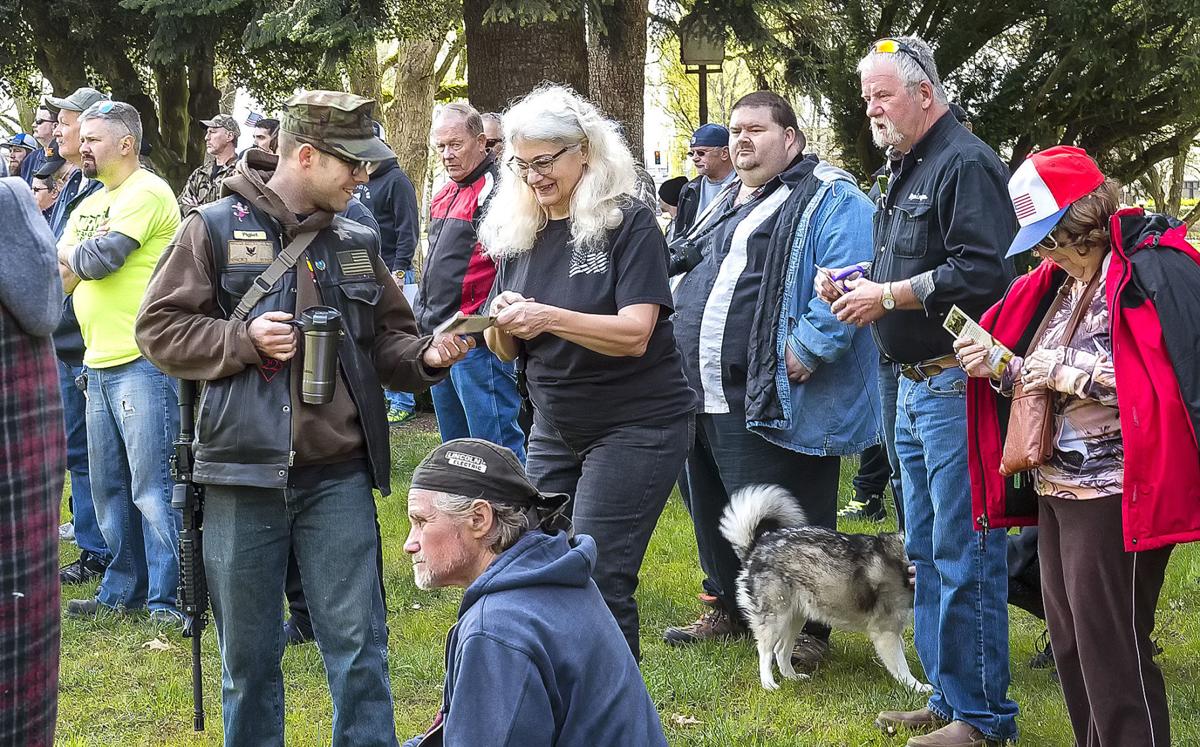 Zaria Belle hands out copies of the U.S. Constitution to people who came to the meeting to support Second Amendment rights at the Civic Center.

Nearly 400 people gathered at the Longview Civic Circle on Saturday for a crisp, sunny day of speeches and conversations in support of the Second Amendment.

The event came a week after more than 320 people marched around the Civic Circle to protest gun violence as part of a national campaign titled “March For Our Lives.”

Saturday’s rally saw a slightly older and male-leaning audience, many toting signs or guns in their belts.

“What part of ‘Shall not be infringed’ do you not understand?” asked another, a reference to the language of the Second Amendment’s right to bear arms.

Many passing drivers honked in support of the rally, and a pickup sporting a Confederate flag rounded the Civic Circle several times while the driver revved the engine. There were no confrontations or counter-demonstrations, and the tone was more laid-back than fiery. But there were flashes of constitutional ardor.

“This kind of gathering is what America is about,” state Rep. Jim Walsh told the assembly. “I was talking to somebody up in Olympia, and they said, ‘you’re gonna (see) gun-toting, Constitution-quoting folks in Cowlitz County.’ And I said, damn right you are, they’re the ones who elected me.”

The event opened at 11 a.m. with a reading of the Second Amendment from event organizer and Kelso resident Kel Koontz, who told The Daily News Monday that the event was intended to spark conversations about gun rights.

“This event is for everyone,” Koontz said, addressing onlookers in the center of the Civic Circle. “This is not just about me, or the speakers. This is about our whole community, our whole state, our whole nation.”

The event was part of a response to the national upwelling for more gun control in the wake of recent school shootings, especially the Feb. 14 shootings at a high school in Parkland, Fla., that claimed 17 lives.

After speeches from Spencer Boudreau, Bill Josh, Mike Wallin and Kevin Hunter, the event was opened to public comment. Castle Rock student Caidence Myers, 14, was the youngest attendee to address the audience.

“As a child of our great America, I ask that those who are not getting their way, those who will not face the facts, those that cannot find any other way but to brainwash our beautiful American children,” Myers said, with tears in her eyes,“I ask that they not use horrible accidents to take away our rights to keep us safe in the future.”

The Cowlitz County Libertarian Party distributed free copies of the Constitution and had voter registration forms at their booth. Rainier businesswoman Theresa King also had a booth at the event sporting handouts with self-defense tips as well as an NRA flyer titled “A Parent’s Guide to Gun Safety.”

“I think that part of the Second Amendment comes with the responsibility of keeping those guns safe in the home, especially when you have children,” King said. She also said she was an advocate gun ownership for women. King also was selling concealment holsters for women to carry weapon on their thighs, panties and backs.

Kelso resident Wayne Rose, 41, set up a table behind most of the crowd with numerous American flags. On the table, Rose had five flags ceremoniously folded 13 times to represent deceased family members who served in the army and navy. Five family members, he said, are still in the service today.

A poster next to Rose’s booth read: “Just trying to show you that our rights come at a cost. There was a huge cost to obtain these rights and there is a continued cost to keep those rights.”

When asked what could be done to stop school violence, Rose said, “There needs to be more protection for our kids.” He noted that many federal and state buildings have armed guards, and said he didn’t understand why many schools don’t have them, too.

Many at the event said that they believed marchers last week had the right to assemble and share their views.

“I was invited to counter-protest and I said ‘No, let them have their space, their chance to say what they have to say,’” she added.

Taylor brought her AR-15 and five of her seven children.

A variety of weapons were on display. Several attendees waived Gadsden Flags depicting a rattlesnake with the well-known phrase, “Don’t Tread on Me.”

Stan Mourning, a 65-year-old Kelso man, carried one of the flags, which is often associated with the Libertarian Party.

“We don’t want the amendments to the Constitution trampled on,” Mourning said. “The rights that we have, all of them, are protected by the Second Amendment.”

Mourning said he understood the frustration felt by last week’s “March For our Lives” participants, but he wished “they had a better understanding” of the issues.

“It’s not about hunting,” Mourning said. “It’s about protecting ourselves from our own government or (threats) outside our government. ... I can’t carry a policeman with me, but I can carry a weapon.”

Longview resident Brad Colkitt said he was unimpressed with the March For Our Lives event and wished it had been more focused on kids.

“It was more adults and their agenda being pushed onto kids. … But I don’t understand why, you know, I don’t push my beliefs on my kids nor do I believe anybody should push their beliefs. It’s America, we all have our own opinions and our own ideas,” Colkitt said.

Colkitt also said that he believed people against guns were dangerous because of their “blind beliefs.”

“The reason they have their freedoms today is for what’s happened in the past — our forefathers, our veterans — you know that’s what makes the USA great,” he said.

65-year-old Stan Mourning of Kelso displays a Gadsden flag depicting a rattlesnake and the words 'Don't Tread On Me' at the 'Stand for The 2nd' event held in Longview's Civic Circle on March 31.

State Rep. Jim Walsh, R-Aberdeen, has a receptive audience as he talks about Second Amendment rights to a crowd of nearly 400 people gathered at the Civic Center.

Everyone who came to support the Second Amendment didn't bring a rifle or handgun, but there were plenty of them throughout the crowd listening to speakers at the Civic Center.

Zaria Belle hands out copies of the U.S. Constitution to people who came to the meeting to support Second Amendment rights at the Civic Center.