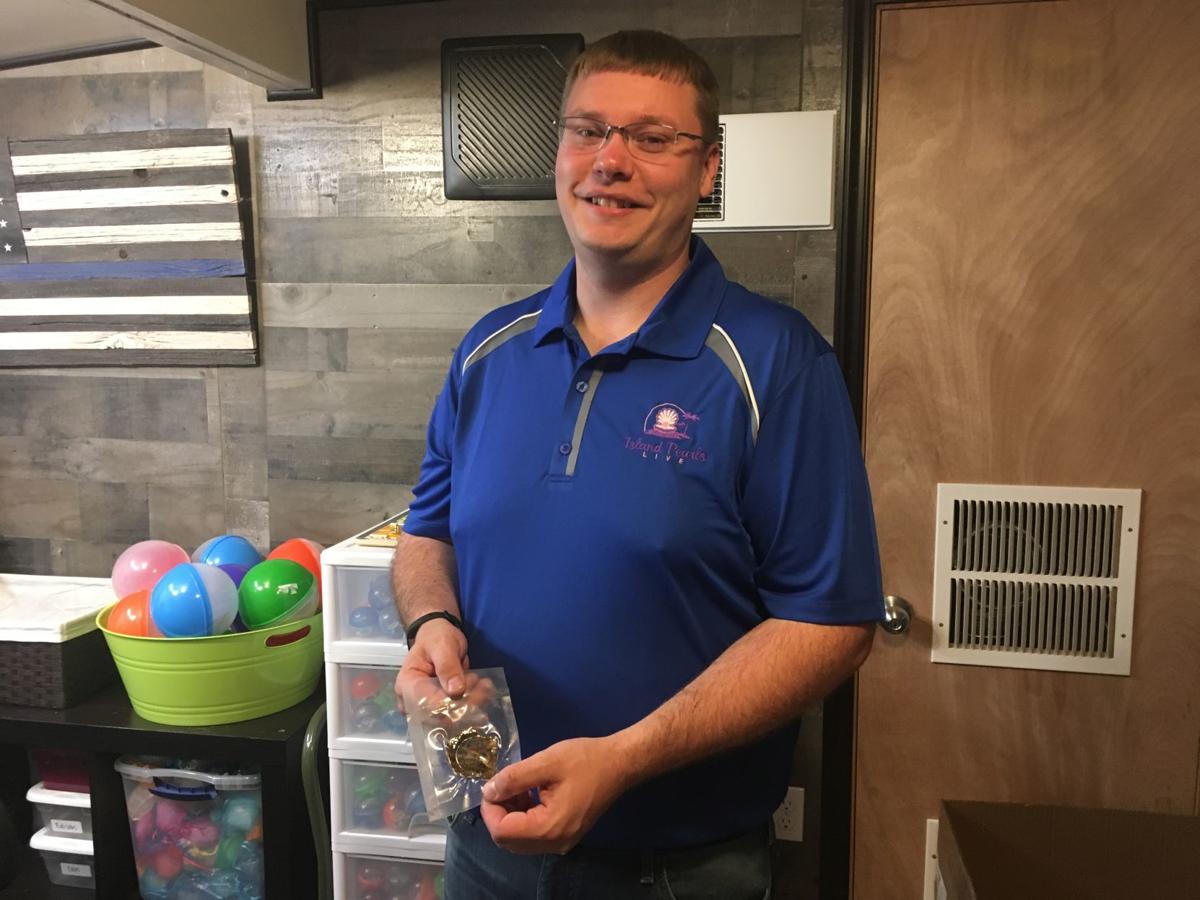 Beau Renfro holds an unopened Akoya oyster. Hundreds of oysters like it are opened every day on "Island Pearls Live," a live show on Facebook and YouTube that he broadcasts from his Puget Island home. 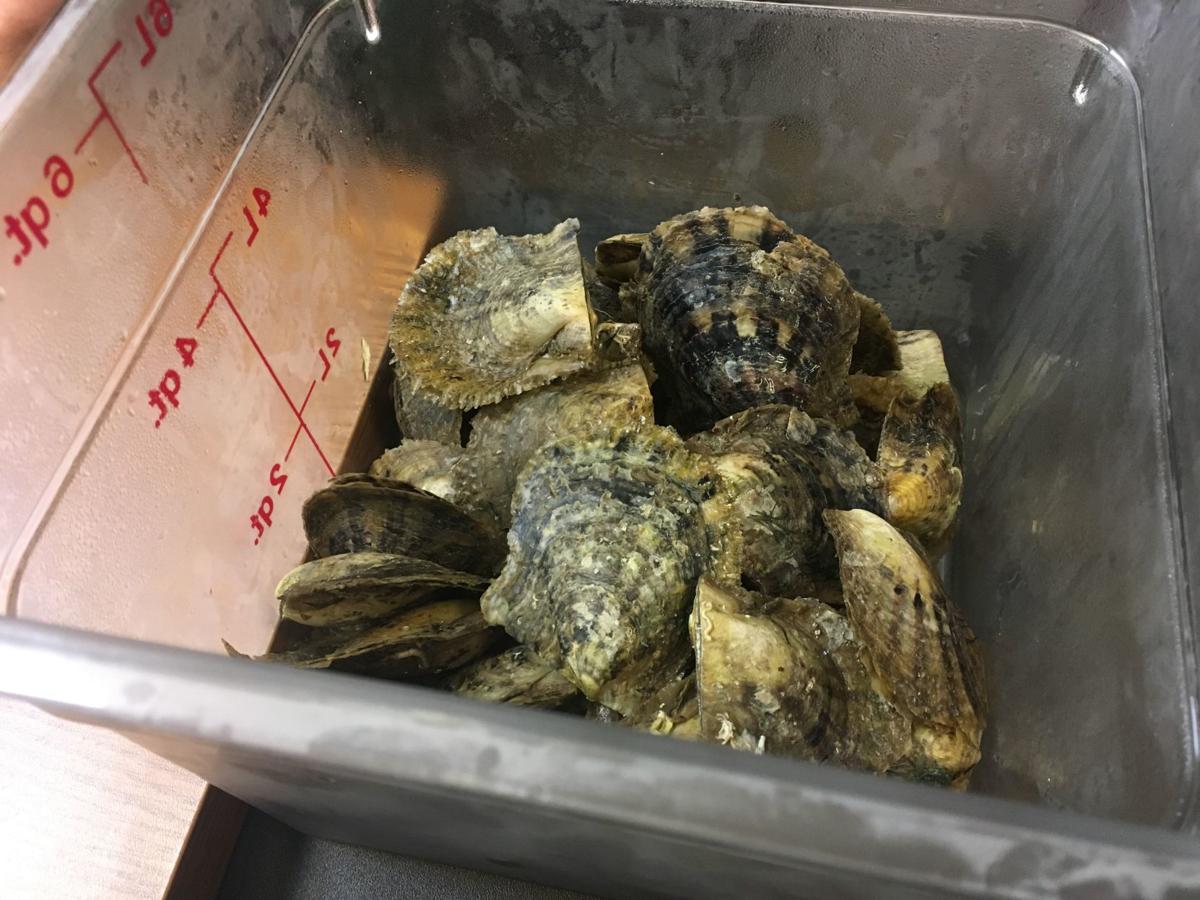 A box of oysters, soon to be shucked on "Island Pearls Live."

In an unassuming Puget Island house, Beau Renfro and his small team get ready to broadcast to a live audience of hundreds around the world. Their Facebook page alone carries more than 30,000 followers.

What’s drawing in their devoted fan base? Live oyster shucking.

The two hosts of the show “Island Pearls Live,” Lisa Watkins and Annie Howell, take turns recording eight to 12 hours of oyster openings, games, and conversation to their Facebook and YouTube audiences five days a week.

Customers buy oysters for $20 each and watch as the hosts reveal the pearls inside live; after the show, the pearls (and, if the customer wants, the shell too) are mailed to them.

What started in March 2017 as a small personal project has now become a full-time job for Renfro, 36, and four employees, in addition to auxiliary helpers he’s had to hire on.

Renfro said they average 300 to 400 oysters sold during the live shows each day. They’ve shipped more than 15,000 orders, some as far as Germany, Australia, and Iraq. The growth has been so explosive that it’s caused growing pains for the Cathlamet Post Office, he said, since his company is responsible for more than 90 percent of its outgoing mail.

Much of the unexpected success owes to Facebook’s recommendation algorithms, which connects fans of other live-pearl openers to Island Pearls Live. Those algorithms have provided a huge boon to small businesses like Renfro’s that rely on a large and spread-out fan base.

“One day, it’s like the light bulb came on,” he said. “(The business) hit the right group of people… and this thing really just exploded.”

Most people solely buy the shells and live-opened pearls, but Island Pearls Live also sells a rotating collection of jewelry built around their pearls. Pendants and rings adorned with cats, eagles, hearts and owls sell for about $15 to $35 each and are adorned with pearls from their oysters.

The hosts have a strong relationship with their viewers, and episodes often begin with Watkins or Howell checking in with their fans. For some viewers, Island Pearls Live is the core part of their social lives.

“I’m in tears probably three times a week,” Watkins said, “because you’re touching someone’s life, and you don’t really know how you are until they message you.”

A hardcore group of fans has watched the show every day since it started, Watkins and Howell added.

Most of the pearls come from Akoya oysters farmed and shipped from ZhanJiang, China.

All their Akoya oysters are cultured, Renfro said, which means they’re implanted with a tiny piece of shell as babies. As the oysters mature, they perceive the shell fragment as an irritant and roll it around in nacre to protect themselves. This process — which takes about three years — eventually produces a six to eight millimeter pearl.

Island Pearls Live also sells pearls from larger mussels. They live up to six years and can have dozens of “irritants” implanted to create multiple pearls, many of which can have unorthodox shapes and sizes.

You can order the oysters to open yourself at home, but Island Pearls Live’s website warns that since the shells are natural and sold as-is, results may vary. Customers might get twin pearls, for instance, or they might end up with a pearl-less oyster. If a pearl-less oyster is bought to be opened on the live stream, though, Howell or Watkins will just open another one for you.

While business is chaotic, Renfro said he’s impressed by how well his team keeps up.

“They have two feeds they’re watching simultaneously and interacting with those customers,” he said. “How they do it, I don’t know. ... I have a hard time just watching all (the comments) go ripping by, but they read them all.”

Beau Renfro holds an unopened Akoya oyster. Hundreds of oysters like it are opened every day on "Island Pearls Live," a live show on Facebook and YouTube that he broadcasts from his Puget Island home.

A box of oysters, soon to be shucked on "Island Pearls Live."