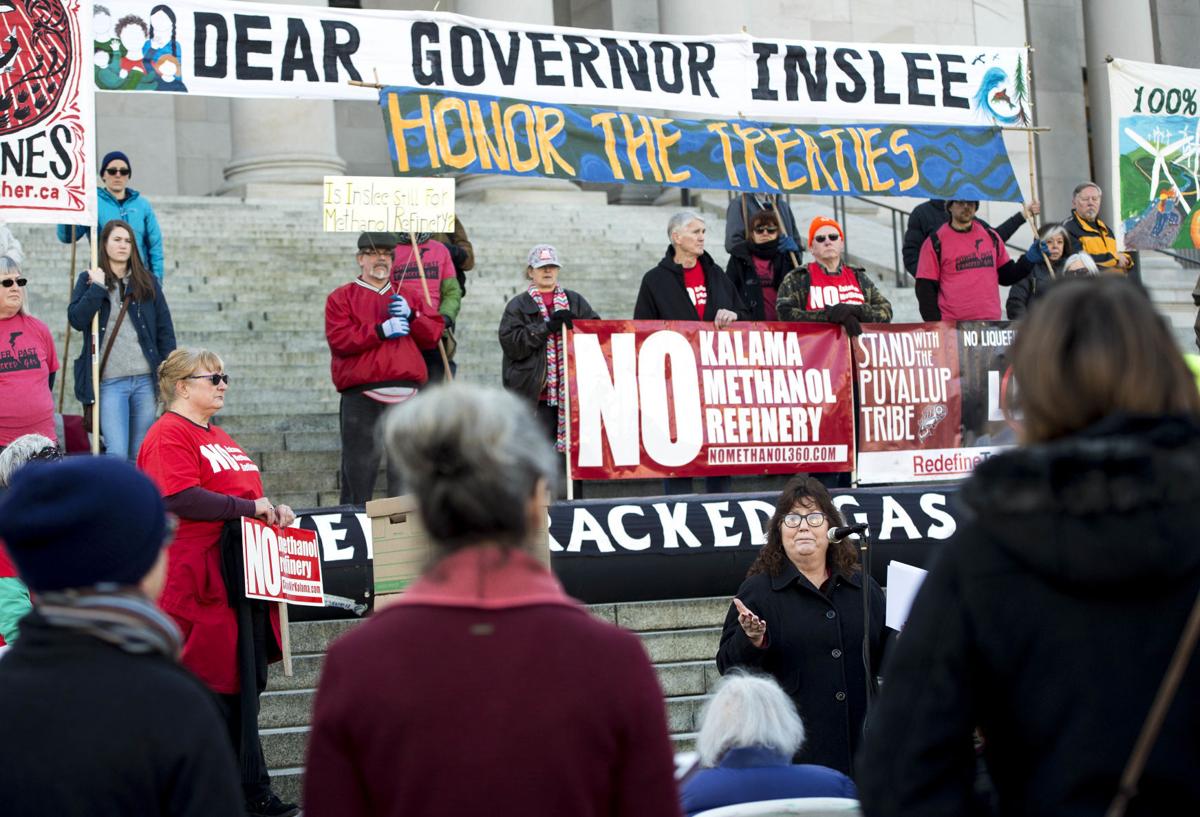 Charlene DesRosier, owner of Camp Kalama, tears up considering the ways a proposed methanol plant in Kalama may affect her business and family while addressing the crowd at a fracked gas resistance rally Thursday at the Washington State Capitol in Olympia. 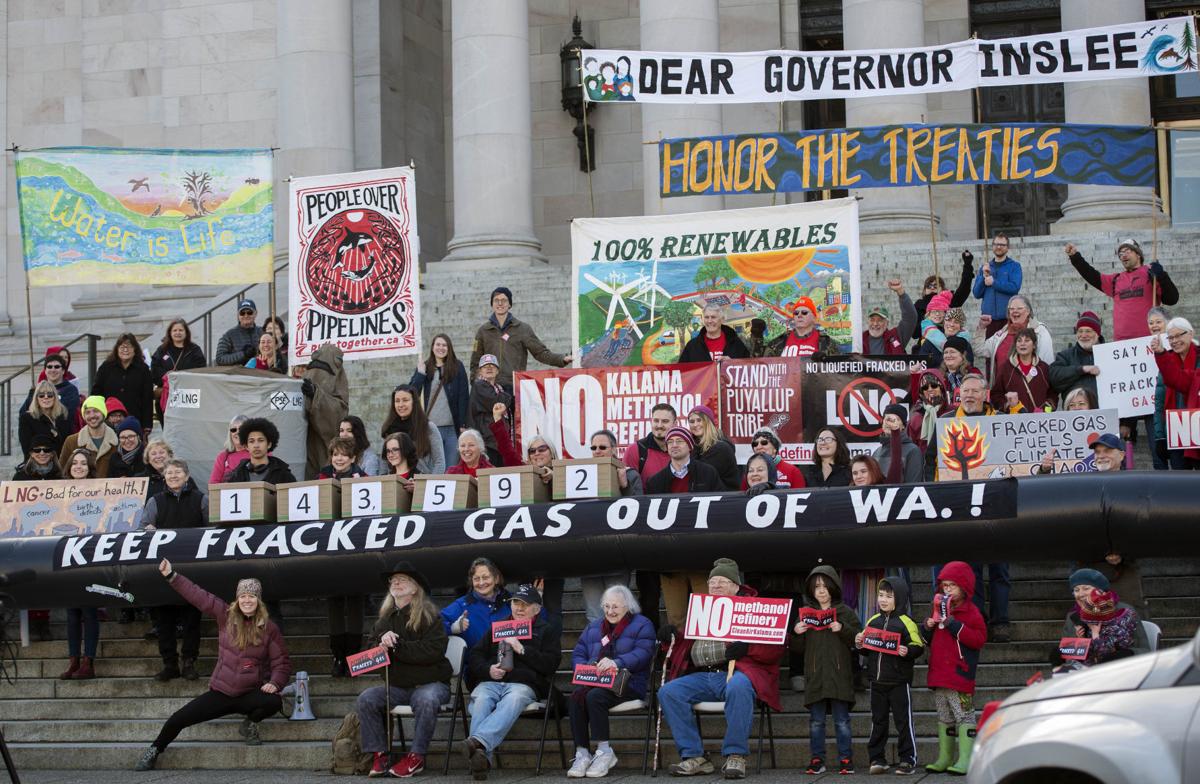 Speakers, organizers and attendees of the fracked gas resistance rally in Olympia Thursday cheer on the north steps of the state Capitol for a photo following the event. 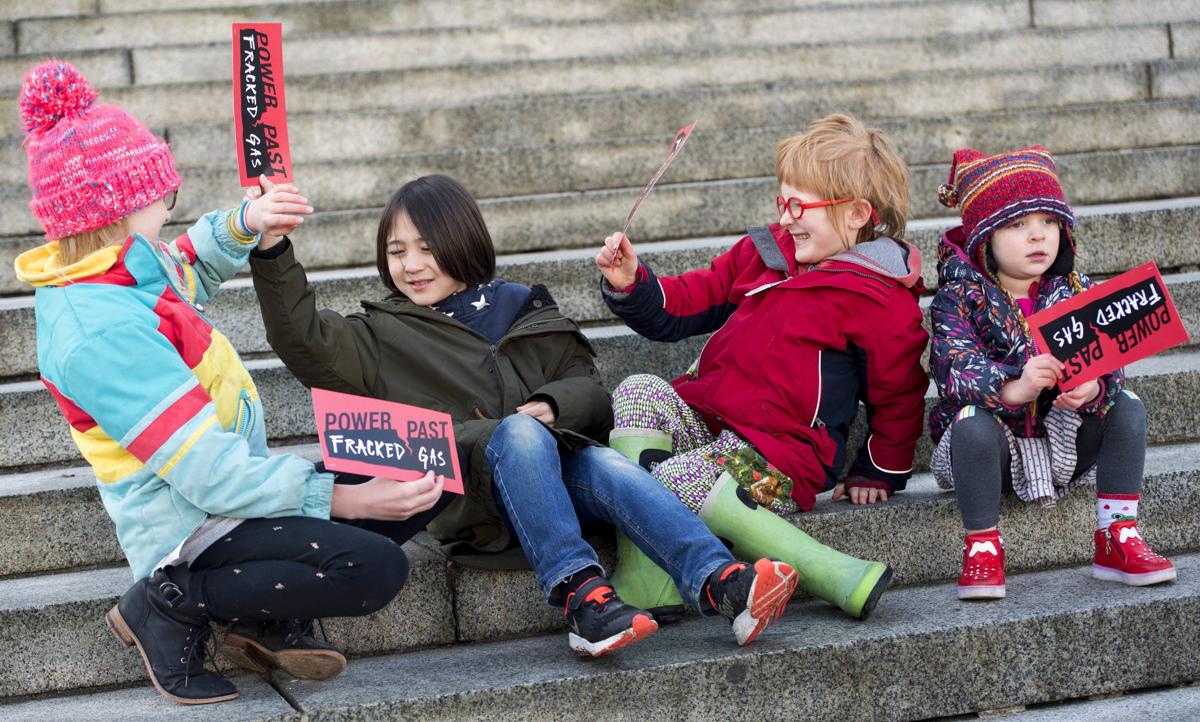 Four kids play with signs on the north steps of the state Capitol Feb. 21, 2019 at the fracked gas resistance rally.

OLYMPIA — In a plea to Washington Gov. Jay Inslee to stop projects like the proposed $2 billion Kalama methanol plant, about 100 people gathered at the state Capitol on Thursday to oppose manufacturing facilities that use fracked natural gas.

Kalama resident Charlene DesRosier, a speaker at the event, said her home is the closest private residence to the proposed plant, which is proposed for the north end of the Port of Kalama. Her business, Camp Kalama RV Park and Campground, is the closest non-industrial business to the plant.

Speakers and organizers specifically called out the Tacoma LNG project and the proposed $2 billion methanol plant that Northwest Innovation Works (NWIW) aims to build at the Port of Kalama.

Environmentalist group Columbia Riverkeeper, which organized the rally, said it also delivered 130,000 public comments to the Governor’s Office opposing “fracked” gas projects. Fracking is the controversial process of drilling into the ground and then injecting a high-pressure water mixture into the rock to release the natural gas inside.

DesRosier said she was concerned about potential environmental, health and tourism impacts of the plant on the Southwest Washington community.

“Kalama is not a town that is burned out with businesses closed down and people moving out of the community. It is not a town that needs to be saved, grasping at any business to help it survive. In fact, it’s quite the contrary. We have new businesses coming to town,” DesRosier told the crowd. “We should be encouraging this movement, not putting in a business that would be a negative when people investigate moving to or visiting our community.”

NWIW plans to convert natural gas into methanol, a key ingredient in plastics manufacturing, which would then be shipped to Asia. Chief Commercial Officer and General Counsel Kent Caputo said the rally was a form of communication that NWIW wants to be a part of.

Over time, Caputo said, it’s necessary to find alternatives to natural gas. But the methanol plant is a step in the right direction, he said.

“We’re trying to move beyond coal. We’re trying to use natural gas in the most responsible and forward-leaning way possible to be part of creating the products that people use every day at an ever-increasing pace,” Caputo told The Daily News. “We have to use the resources we have in the most responsible way we can at a scale that can have a positive impact right now.”

According to environmental studies, its Kalama plant would not release any water pollution and would have minor impacts on air quality. NWIW has pledged to compensate for all 1.1 million tons of annual greenhouse gas emissions in Washington, and a recent “cradle to grave” study showed it would have a net decrease on greenhouse gas emissions globally by displacing coal-fed methanol plants in Asia.

A spokesperson for Gov. Inslee Thursday said he supports “thorough and objective” reviews of all major energy projects in Washington.

“Our state has some of the most rigorous air and water standards in the nation, and our agencies – along with other independent regulatory authorities … are incorporating a broader analysis of greenhouse gas emissions as a part of those project reviews.

“The debate and discussion about moving towards fossil fuel-free energy sources is exactly the discussion the governor has been hoping for. For more than a decade he has been an aggressive proponent of decarbonizing our economy and transitioning to clean energy technologies,” she said.

She did not comment on whether the governor supports the proposed Kalama methanol plant, though he spoke highly of it when it was first proposed several years ago.

Kalama resident Diana Leigh said Thursday that the number of jobs NWIW will create does not make up for the environmental impact of the project.

Mark Uhart, who moved from Kansas to Kalama in 2015, said the environmental review of the project did not take into account how vapor clouds from the plant could aesthetically impact the area and hinder migratory birds.

“I love the area (and) I wanted to be a part of keeping the Northwest the way it is: clean. And keeping it as a place the whole public can enjoy,” Uhart said.

John Flynn, 68, said he believes scientific reviews of the project “downplay” the amount of greenhouse gas emitted from the plant.

He said he and his wife moved to Kalama in 2010 primarily due to its fishing access to the Columbia River.

“This plant would be a monstrosity on the river operating 24-7,” Flynn said. “I can’t see myself enjoying fishing in the shadow of a monster methanol refinery.”

He said he drove up with 20 other Kalama residents for the rally.

According to the Cowlitz County Sheriff's department, the Lower Columbia SWAT team was called out Saturday to the 6400 block of West Side High…

The Port of Kalama will receive $2.2 million from the state to fund half of its new pedestrian bridge, one of several Cowlitz County projects …

Cowlitz County likely to remain in Phase 2, some larger counties in danger of backslide

Cowlitz County has two new places to shop for Mother’s Day gifts: a houseplant specialty store in Longview and an artisan soap shop in Kelso.

Charlene DesRosier, owner of Camp Kalama, tears up considering the ways a proposed methanol plant in Kalama may affect her business and family while addressing the crowd at a fracked gas resistance rally Thursday at the Washington State Capitol in Olympia.

Speakers, organizers and attendees of the fracked gas resistance rally in Olympia Thursday cheer on the north steps of the state Capitol for a photo following the event.

Four kids play with signs on the north steps of the state Capitol Feb. 21, 2019 at the fracked gas resistance rally.