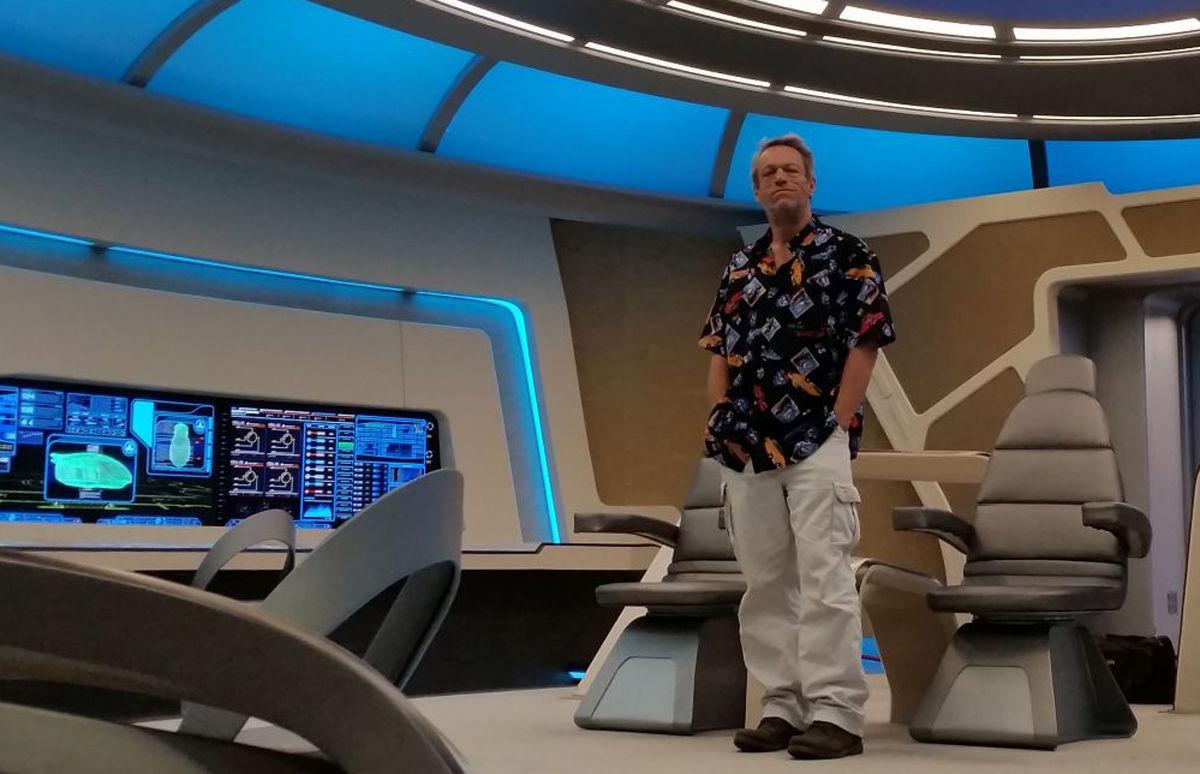 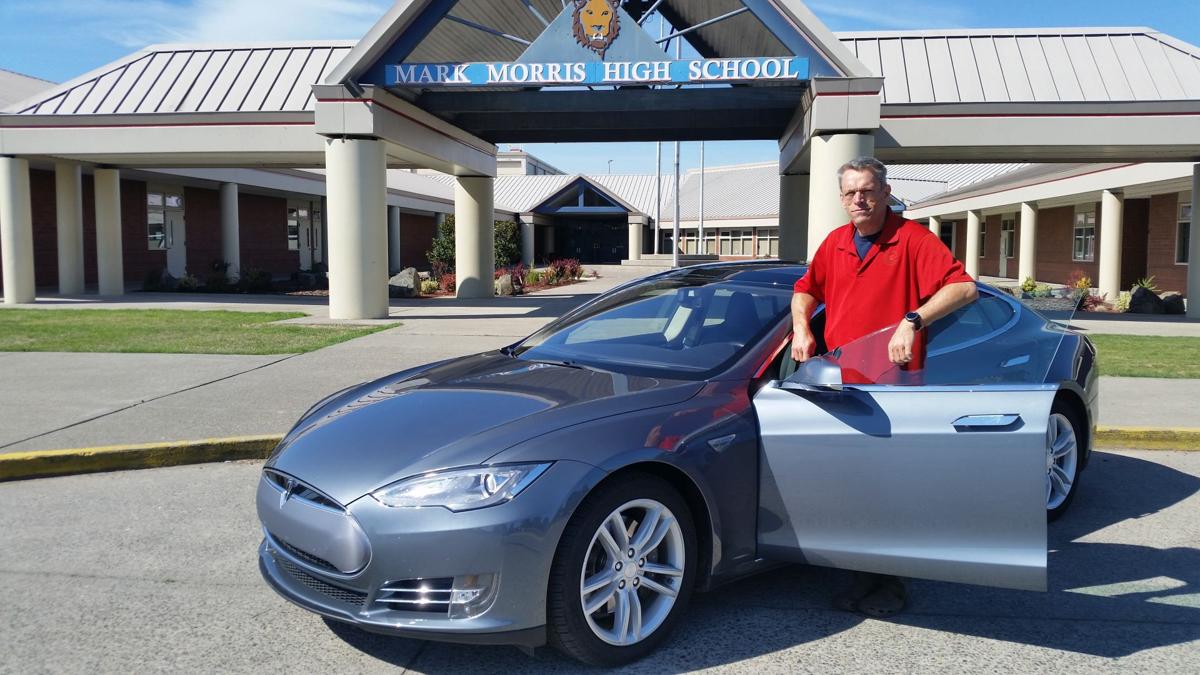 Actor Brian Thompson stands in front of his alma mater, Mark Morris High School, from which he graduated from in 1977.

Longview-raised actor Brian Thompson has a distinctive face you can't help but recognize. Some might see him and instantly think of his role as the Night Slasher in "Cobra." Others might remember him from his recurring role as the Alien Bounty Hunter character from multiple "X-Files" episodes.

During an interview with The Daily News last week, the waitress at the Longview Country Club told Thompson she loved him as Buffalo Bob in "Joe Dirt."

Being a character actor allows Thompson, 58, to slide into many different roles. According to the Internet Movie Database, he's appeared in over 100 films and TV shows. One of his latest gigs is in an upcoming episode of Seth MacFarlane's new sci-fi comedy on Fox, "The Orville."

Although Thompson said he couldn't reveal exactly who his "Orville" character is, he said working on the weekly series was a blast.

"I think the show has marvelous possibilities," he said. "It's a fun part."

Thompson said he's comfortable in the sci-fi realm, due to his work with "X-Files" and appearances in four different "Star Trek" series. "Orville" is heavily based off of "Star Trek" and debuted Sept. 10.

Thompson will appear in the series' eighth episode, and although Fox hasn't quite set an exact date for when it will air, the actor believes it will be near Thanksgiving.

The actor said working with MacFarlane, famous for creative endeavors such as "Family Guy," "Ted" and "American Dad," was a treat, as Thompson got to witness the show creator and lead actor's intense work ethic.

"(MacFarlane) is remarkably hard-working," Thompson said. "He’s a producer on the show as well, and he’s there every hour of every production. Mind you, this is only one of the shows he’s producing: He’s got ‘Family Guy,’ also, and he has movies in the works. How he keeps himself energized is a miracle.”

Although Thompson is only in a guest spot on "Orville," he said he enjoys his typical role as a character actor, especially since they don't have the stresses lead actors face.

“Being a supporting actor, once you’re on the set, it’s one of the easiest jobs in Hollywood," he said. "An acting job is like a vacation for a (supporting) actor. For the leads, for Seth MacFarlane, it’s an exhausting gauntlet. They have to be there every day, do makeup early, memorize their lines at night after work, day after day after day. Plus, they’re the ones that people want to see press on, so they’ve got a press junket. I’ve seen being a lead in a TV show eat people.”

Of course, getting the spot on "Orville" was a challenge in itself: Thompson said he had to attend five different auditions for four different roles in a timespan of over a year. The actor didn't even seem fazed by this, casually remaking that this long-winded process is"normal."

Thompson got his start at acting while at Mark Morris High School (class of 1977) in a production of "You Can't Take it With You." He was instantly hooked.

"I was like somebody had finally vibrated my tuning fork," he said. "I couldn’t stop thinking about acting. I had more fun than anything I’d ever done, and I’d had a lot of fun playing sports and high school and playing band.”

After enrollling at Central Washington University to play football, Thompson found himself onstage again, this time in a CWU production of "Guys and Dolls." Although he was originally a music major, his father, a science teacher at R.A. Long High School, encouraged him to switch to business management.

“Accounting classes were so against my grain, but stuffing discipline onto a free spirit has a lot of advantages," he said. "I heard a lot from professional actors who’d say, ‘Acting is a business.’ Well, that concept was not lost on me, and I knew that on a lot of my classmates, it was.”

After turning down a stable construction job in Portland, Thompson snuck off to a professional training actor program at the University of California-Irvine in 1981. Three years later, he had joined the Screen Actors Guild and had his first role in a major film.

This wasn't just any hit movie either: It was James Cameron's "The Terminator." Thompson had the honor to be the first man brutally murdered by Arnold Schwarzenegger's cyborg in the 1984 film.

“I just like that guy’s headspace, because he believed that he didn’t have any adversaries," Thompson said of the role. "I’ve played a lot of roles that were adversarial to say the least. Disturbed and adversarial is not a pleasant head space to visit."

Currently, Thompson lives with his wife in La Cañada Flintridge, a Los Angeles suburb north of Pasadena, and has a second home on the Oregon Coast where he frequently surfs.

However, Thompson said what he wants more than anything else is to have a distinct, timeless character of his own.

“It would be awesome if there was some part you could put your mark on permanently," he said. "By mentioning these roles and these actors, I don’t mean to put myself in their (shoes) but to put your own stamp on an original character (like) Jack Nicholson in ‘Cuckoo’s Nest,’ Daniel Day-Lewis in ‘Lincoln,’ Brian Cranston in ‘Breaking Bad.’  They set the benchmark. They defined a character in a beautiful production.”

However, Thompson said he's completely content in his career as a consistently working character actor.

“I do enjoy what I’m doing a great deal, and it’s a fantastic lifestyle."

Brian Thompson and his late father, Bert, a science teacher at R.A. Long High, both were obsessed with the idea of electric cars.

“My father and I have been in love with the thought of electric cars since there was electricity, probably," the "Orville" actor joked.

Bert passed away in 1999, but his son's passion for electric cars never died.

Recently, Thompson purchased a Tesla, and he couldn't stop raving about how smooth a ride it is. The actor also said his new wheels ease his guilt about driving, due to the car's low carbon footprint.

However, a strange event occurred when Thompson received his license plate from the DMV. He opened the envelope to reveal the plate as 802-JAD.

Thompson said those characters have deep personal meaning to him: His father's birthday was Aug. 2, so that alone "freaked (him) out."

Furthermore, JAD is the texting abbreviation he uses for his two adult children: Jordan and Daphne.

Thompson was shocked that a randomly assigned plate could end up having such significance.

"The odds are lottery-winning odds, to get those six characters in a row, the significant people in your family,” he said, tearfully.

To this day, whenever Thompson looks at his Tesla, he said he is reminded of his family.

“I see that car in the garage, and I see that license plate, and I think about my dad and my kids. A lot of disciplined, smart choices that got the kid that graduated from Mark Morris High School in 1977 to a wild occupation in a big city."

Actor Brian Thompson stands in front of his alma mater, Mark Morris High School, from which he graduated from in 1977.