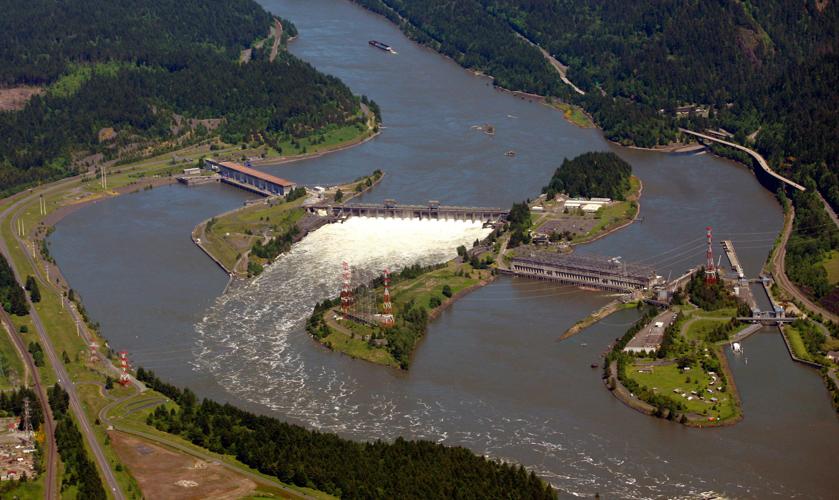 This June 3, 2011, file photo shows the Bonneville Dam on the Columbia River near Cascade Locks, Ore. 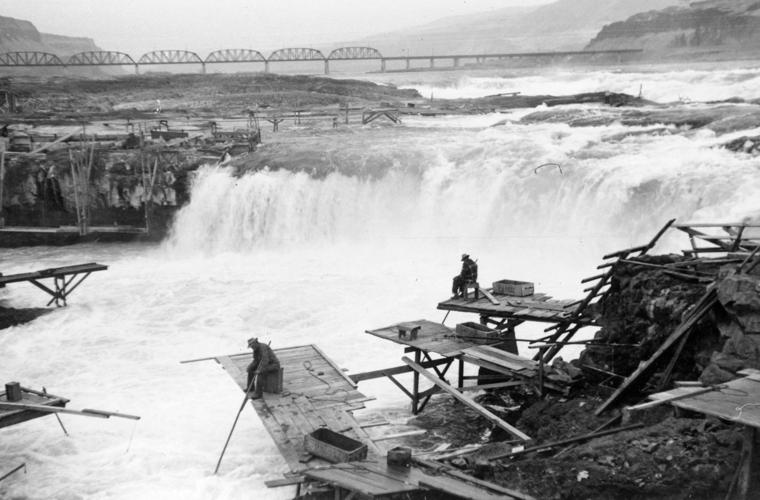 The Dalles dam reservoir flooded Celilo Falls, which is pictured in this archival image. The Yakama Nation last month called for the removal of the Dalles and two other Columbia River dams, which tribe leaders say inundated fishing grounds promised to the tribe in a 1855 treat with the U.S. government. 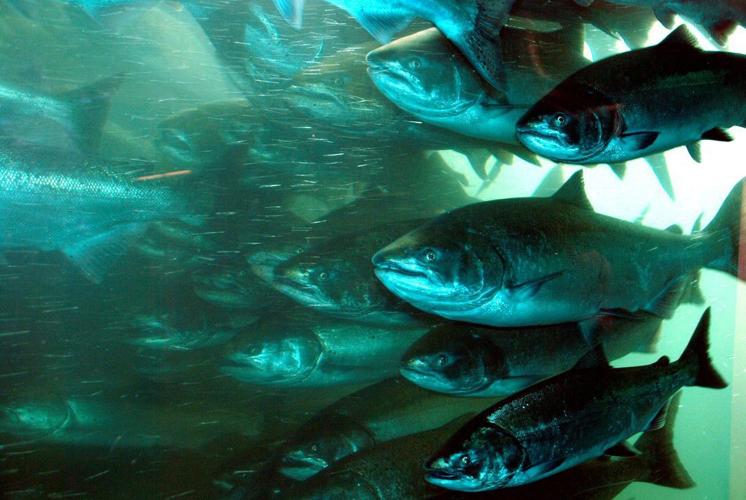 In this U.S. Army Corps of Engineers photo from 2015, salmon swim by a fish window at Bonneville Lock and Dam on the Columbia River as they return to their spawning grounds.

For years, Indian tribes and many conservationists have demanded the breaching of four lower Snake River dams. But they’ve recently upped the ante in a big way.

In an Oct. 13 press conference, the Yakama and Lummi nations said the Bonneville, John Day and Dalles dams on the mid and lower Columbia River violate a treaty between the tribes and the U.S. government and should be removed because they are an impediment to recovering threatened salmon runs.

The idea has been condemned by commercial, power and port representatives, who say removing the dams would wallop the region’s economy and undercut efforts to combat climate change.

The Port of Longview commissioners last week went on record opposing removal of any of the dams.

“There are many steps we need to try (to recover salmon) before we get to a drastic measure,” said Port Commissioner Jeff Wilson. “That is why we put a resolution out there now: We would like to avoid a drastic measure and yet encourage professional and well-meaning discussion over this topic.”

Opponents say there’s no guarantee salmon would flourish if the dams are removed, because so many factors affect their survival, such as ocean conditions and predation by cormorants and sea lions. And salmon are doing poorly in rivers without dams, too.

What is certain, is that the region would lose a massive volume of clean, reliable energy, they say. The Dalles, John Day and Bonneville dams, for example, each produce enough power to supply the city of Portland.

“We want salmon recovery. We just don’t want it at the cost of clean, reliable energy sources if that’s not necessary,” said Kurt Miller, executive director for Northwest River Partners, a group of utility districts, ports and businesses.

The dam removal conversation is “worrisome” because “hydropower has been the backbone of the Northwest economy for decades and decades,” said Gary Huhta, general manager of Cowlitz PUD. Hydropower makes up about 80% of the PUD’s supply.

Columbia Riverkeeper, an environmental group supporting the tribes’ call for dam removal, said it is “confident we can replace the dams with truly clean energy,” such as wind and solar coupled with battery storage.

Miller disagrees. Solar and wind power are not as consistent or reliable, he said, so it’s “critical” to keep the dams as a carbon-free power source. Otherwise “we could actually have blackouts.”

The dams also are critical for river navigation and commerce. Shipping of grain, wood chips and a host of other commodities through the Columbia-Snake rivers would be impossible without them, said Kristin Meira, executive director for the Pacific Northwest Waterways Association.

Port of Kalama spokeswoman Liz Newman said the ports “depends on the Columbia Snake River System for the livelihood of thousands of local community members from farmers to longshoremen, fishermen, and recreation and tourism workers.” Without the dams, the port would have to move more than 13 million tons of cargo annually by some other method, such as rail or truck, she said.

PNWA estimates that for every four-barge tow it would take about 100 unit trains or 538 trucks to ship the same amount of cargo. That businesses at the Port of Kalama would need 500,000 trucks to move its annual tonnage.

“People are concerned about greenhouse gasses. You want to add all those trucks to the roads? That’s fine. But you aren’t gaining anything on the fight to lower greenhouse gases,” said Port of Kalama Commissioner Allan Basso.

Dam removal “seems like the wrong, very extreme path to go down if one wants to talk about salmon recovery,” Meira said.

Federal managers have invested billions of dollars into improving fish passage systems, and the survival rate for Chinook and steelhead migrating downstream exceeds 90%, according to the federal estimates.

Brett VandenHeuvel, Columbia Riverkeeper’s executive director, argued that the “decades-long effort to recover endangered salmon is not working.” The Columbia Basin once produced 10 million to 16 million returning adult salmon per year. Today the basin gets about 1 million, and 13 of its salmon runs are listed under the Endangered Species Act.

“The Columbia River is too hot for salmon survival. The stagnant reservoirs behind the dams create dangerously hot water,” VandenHeuvel said. “The system is broken.”

The Cowlitz Tribe has no position on the dam removal, said Tribe Council Chairman Wiliam Iyall. But the tribe “acknowledged that the dams provide benefits to — and impose costs on — taxpayers. But the structures contributed to the long decline of fish runs and continue to impede their recovery.”

Still, dam advocates say there’s no substitute for their power and navigation benefits.

“If there was a logical reason to get rid of those dams and it was workable, I think people would hop on it,” Basso said. “But (right now) … there’s no reasonable alternative to providing the power and the transportation.”

The shooting occurred by the Vern Long Lions baseball park in Kalama.

Volunteers and Longview city staff are building the pallet homes on Alabama Street, but the county commissioners still haven't agreed to fund the project.

A Portland hiker and his puppy were shot dead on a remote Washington trail; the investigation has been as strange as the killings

This June 3, 2011, file photo shows the Bonneville Dam on the Columbia River near Cascade Locks, Ore.

The Dalles dam reservoir flooded Celilo Falls, which is pictured in this archival image. The Yakama Nation last month called for the removal of the Dalles and two other Columbia River dams, which tribe leaders say inundated fishing grounds promised to the tribe in a 1855 treat with the U.S. government.

In this U.S. Army Corps of Engineers photo from 2015, salmon swim by a fish window at Bonneville Lock and Dam on the Columbia River as they return to their spawning grounds.