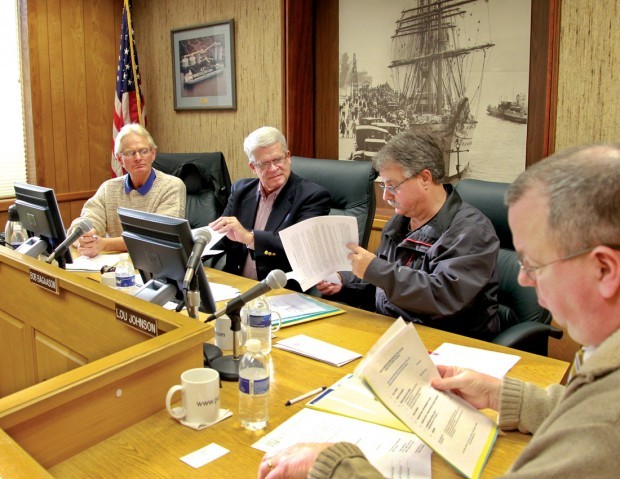 From left to right, Port of Longview commissioners Darold Dietz, Bob Bagaason, and Lou Johnson and port attorney Frank Randolph sign a series of lease amendments for the EGT lease agreement. EGT and ILWU representatives requested the specific changes to facilitate negotiations toward a working agreement for staffing the EGT terminal at Port of Longview. 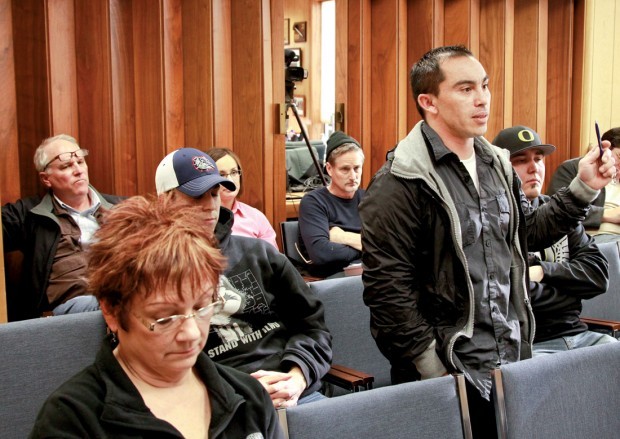 ILWU Local 21 vice president Jake Whiteside thanks the Port of Longview commissioners for the amendments to help speed along negotiations for the EGT grain terminal staffing. In the back left, terminal manager Jerry Gibson follows the meeting progress.

Port of Longview commissioners Friday signed off on a settlement with EGT Development and union dock workers. The pact provides a framework for longshoremen to work inside the $200 million grain terminal and end one of the area's longest, angriest labor disputes in decades.

EGT and the International Longshore and Warehouse Union still have not signed a labor contract, but both sides agreed on the settlement before submitting it to port commissioners, according to port attorney Frank Randolph. Rank-and-file ILWU members approved the agreement Tuesday, according to the union.

The agreement, announced by Gov. Chris Gregoire Monday, effectively settles a federal lawsuit between EGT and the port over labor requirements at the terminal and halts past claims from the dispute.

• EGT recognizes that workers from ILWU's Longview-based Local 21 are the most qualified employees to run the terminal, and all workers must be dispatched from the Local 21 hall. Those workers must then vote on whether they wish to be represented by the ILWU. The provision is a way to avoid violating federal labor law, which prohibits companies from designating a union before it even hires a work force.

• All workers must have at least one year of grain-handling experience, come from a pool of employees pre-authorized by EGT and be available when ships and trains are called. EGT won't be mandated to keep workers on the job even if there is no grain to move.

• Both sides must drop all unfair labor practice claims and other litigation. The ILWU would still be responsible for damages incurred during last summer's protests, which a federal judge determined was more than $300,000. The union has appealed the amount.

• The Port of Longview amended its lease agreement with EGT so the company is not bound to hire members from any union to work in the terminal. Union negotiators agreed to this stipulation so they can move forward with collective bargaining, according to Randolph.

• The ILWU must request all outside groups, including other labor unions and the Occupy movement, to refrain from picketing at EGT. The Occupy movement and Cowlitz Wahkiakum Central Labor Council had called for mass pickets of the first incoming ship to load grain at the EGT terminal, which is expected within the next few weeks. The union is allowed to resume its picket if collective bargaining talks break down.

"It's a relief that this taking place, and that we can get back to doing what we do best — servicing ships and making a lot of money for the community," Port Commissioner Bob Bagaason said.

In a written statement, ILWU Coast Committeeman Leal Sundet said, "Today's developments are a positive signal that the relationship between ILWU Local 21 and EGT is moving in the right direction."

At Friday's meeting at the port office, three ILWU Local 21 members were in the audience along with Jerry Gibson, manager of the EGT terminal, marking one of the first times both sides have been at the same public event since the conflict began.

"It's been a rough last year, and hopefully we will get to go forward and get to something new. We're excited about what's happening here in Longview, and we're a part of it. And sorry for some of the hard feelings," Local 21 Vice President Jake Whiteside told commissioners.

Gibson referred all comments to EGT CEO Larry Clarke, who did not return a message for comment.

A year ago, early talks between EGT and the ILWU broke off because the two sides were far apart on jobs in the control room, overtime pay and the total number of shift workers. The conflict escalated and led to hundreds of arrests, efforts to block EGT-bound trains and occasional violence.

The union has argued that its contract with the Port of Longview had required EGT to hire Longview-based Local 21 longshore labor on its 35-acre site leased from the port. EGT disagreed and instead hired contractor General Construction, which employed union operating engineers based out of Gladstone, Ore. EGT officials have not said whether they will continue to employ General.

Negotiators are staying mum on how many jobs at the Port of Longview's EGT grain terminal will be filled by union longshoremen, but a tentativ…

Local leaders' reaction to EGT deal? In a word, relief

As word spread of Monday's tentative settlement between the local longshore union and the EGT grain terminal, a giant wave of relief flowed ac…

At the Aug. 4, 2009, groundbreaking for the $200 million EGT grain terminal at the Port of Longview, the construction was hailed as a boon for Longview and the region.

One of the longshore workers arrested in the July 11 and Sept. 7 protests at the EGT grain terminal has pleaded guilty to two counts of second…

Misdemeanor charges against 9 ILWU protesters to be dismissed

The U.S. Coast Guard will escort the first ship coming to the EGT grain terminal at the Port of Longview this month, and the Occupy movement a…

Most viewed tdn.com articles of 2011

Two drastically different but equally compelling stories dominated local news in 2011. The line-of-duty death of Rainier Police Chief Ralph Painter — the first in the town's history — tied for first place with the community-dividing labor dispute between union longshore workers and EGT, as voted by members of The Daily News staff.

The first grain ship headed to the EGT export terminal is scheduled to arrive at the Port of Longview between 11 a.m. and noon Tuesday after d…

Law enforcement preparing for, but not expecting, another big port protest

Local and federal officials are prepared for the arrival of the first ship at the EGT terminal Tuesday, but they say they don't expect any lar…

No protest as grain ship docks at EGT terminal

Calm day at port a big relief for law enforcement

Law enforcement officials celebrated the uneventful arrival of the first grain ship at the EGT terminal in Longview on Tuesday, saying they we…

Union dock workers voted Thursday night to approve a five-year contract to work inside the EGT grain terminal at the Port of Longview, union a…

The Port of Longview spent nearly a half million dollars in legal fees related to the labor dispute at the EGT grain terminal in 2011, while a…

A jury on Wednesday convicted ILWU protester Earl Scott, 56, of Rainier in Cowlitz County District Court. This is the first jury conviction in…

From left to right, Port of Longview commissioners Darold Dietz, Bob Bagaason, and Lou Johnson and port attorney Frank Randolph sign a series of lease amendments for the EGT lease agreement. EGT and ILWU representatives requested the specific changes to facilitate negotiations toward a working agreement for staffing the EGT terminal at Port of Longview.

ILWU Local 21 vice president Jake Whiteside thanks the Port of Longview commissioners for the amendments to help speed along negotiations for the EGT grain terminal staffing. In the back left, terminal manager Jerry Gibson follows the meeting progress.