The Port of Longview is playing a prominent role in helping build the first major wind farm west of the Cascade Mountains, a project that will support hundreds of jobs as it’s built during the next six months.

All 380 pieces of the Skookumchuck Wind Farm, a 38-turbine plant in Lewis County, will travel through the port on their way to a 19,500-acre farm just northeast of Centralia. The shipment includes the longest wind blades to have crossed any dock in the Pacific Northwest, said Ashley Helenberg, port spokeswoman. (See breakout attached to this story).

“The full-circle benefit is that we are handling a project that will ultimately provide our state with more clean energy,” Helenberg said.

According to Renewable Energy Systems, the international energy company developing the project, the wind farm will create 300 jobs during construction and eight full-time jobs once its running. That’s in addition to the hundreds of hours of work supported at the Port of Longview as the parts move through the port.

“This is an all-hands-on-deck effort. ... Wind cargo is the largest job-creator at the port,” Helenberg added.

The Skookumchuck project is not necessarily an early indicator that wind farms will be spouting all over Western Washington, event though the Legislature this spring mandated the state use 100% renewable energy by 2045.

RES proposed the project in about 2012, and they contracted to sell the farm to Puget Sound Energy for it’s “Green Direct” program in 2017. TransAlta, a Canada-based power company with a coal plant in Centralia, also has a 49% stake in the farm.

The wind farm will produce up to 135 megawatts of renewable energy annually, enough to supply about 48,000 homes. The power will be sent into the utility’s “Green Direct” program, which supplies city and corporate clients with greater access to renewable power options, Einstein said.

Construction officially started in July, and the farm is expected to be generating power before the end of the year, said Joel Leineke, executive vice president for RES.

Though the Port of Longview has handled wind cargo in the past for projects across the region, this is the closest site the port has worked with. The wind farm is about 75 miles from Longview.

“It’s always better to keep local projects done with local labor,” Ford said. (RES originally planned to send the parts through the Port of Tacoma, but scheduling changes meant that port was unable to support the volume and timing of the parts, according to project documents.)

RES has also built wind farms in eastern Washington, including sites in the Tri-Cities area, Ellensburg and Dayton. The developer even constructed the Klickitat County-based Harvest Wind and White Creek wind farms, which are owned and operated by Cowlitz PUD. Parts for those farms also moved through the Port of Longview, Helenberg said.

Leineke said the company looks “all over the place” for good development sites. RES chose Lewis County for because it “balanced wind resource with … a close utility interconnect point that was affordable,” Leineke said.

That’s what most developers look for when they set out to build a new wind farm, said Mike Starrett, energy policy analyst for the Northwest Power and Conservation Council. The best sites have easy access to the state’s electric transmission grid, good potential for wind and large areas of land that can be leased or bought for the project, Starrett said.

Eastern Washington and the Columbia River Gorge most readily met those standards when developers built some of the state’s first wind farms between 2000 and 2010.

“There are two reasons why you see that most of the development has been out east. One is the transmission (grid),” which is built around hydropower in Washington, Starrett said. (Most of the big hydropower projects are in eastern Washington.)

“The second is that the chunks of land are easier to sign contract for because they are big.”

Companies that build wind farms in the Northwest region must also purchase a permit to deliver energy on the transmission grid, he added.

The new clean energy act may also help drive new wind projects statewide, he said. That law requires that utility companies stop using coal to provide energy to their customers by 2025 and to use 100% renewable or non-emitting energy sources by 2045.

“(Utilities) will have to find some other source of energy (than coal) because it has to be clean. So we will see a lot of builds because of that,” Starrett said.

Leineke said the new law “makes Washington an interesting state for our developers.” However, he declined to comment on whether RES is planning to build more projects in the state.

Starrett noted that the new law will require the production of “multiple thousands of megawatts of clean energy.” And the transmission grid’s total capacity has been called into question, which might make it harder for any new renewable project to earn a permit to built a project and meet that demand, despite its location in the state, Starrett said.

“Many new projects who request access are being told that they can’t come on without enhancements to the existing grid to expand it’s capacity,” he said. “This is all contractual though because in actual reality, the grid itself is usually not in a traffic jam since most days aren’t peak energy use days.”

In short, it’s too early to tell where new wind farms might arise as a response to the clean energy act, he said.

“A majority of the speculation (for projects) is still happening east of the Cascades,” Starrett said.

And the Skookumchuck farm can’t serve as an early indicator of how developers and utility will meet the state’s new requirements for renewable energy because it wasn’t originally tied to the act, Starrett and Einstien said.

“It’s hard to say where projects might crop up. ... It’s certainly possible (farms will be built in this area), but we haven’t gotten to a place where we have definitely said it will be west or east of the Cascades,” Einstien said.

In the meantime, the Port of Longview is closely tracking potential wind projects across the region, Helenberg said

“And we are hoping any projects on this side of the mountain will contract through the Port of Longview.”

• Each turbine blade for the Skookumchuck Wind Farm will be 220 feet long. This means the area swept out by each unit's three blades will be about 450 feet in diameter. That's longer than the length of a football field (360 feet including end zones).

• Even though the blades are big, they are light because they are made of fiberglass. That makes them delicate and easy to break, requiring extra care in handling, said Port of Longview spokeswoman Ashley Helenberg.

• Because the blades are so long, the towers that support the turbines must be taller to allow the blades to turn without striking the ground. This requires a fourth tower section, one more than the units shipped through the Port of Longview in previous years.

• At the high point of their arc, the tips of the turbine blades will reach about 500 feet above the ground. That's nearly the height of the Space Needle (518 feet).

When word spread in October that LaFavorites Fine Yarn and Boutique would close without a new owner, the tight-knit crafting community took to…

A Thursday morning rollover accident sent a runaway driver to jail and his passenger to the hospital.

Voters approved school operations levies in Longview, Kelso, Castle Rock and Toutle, but levies in Kalama and Woodland failed, according to Tu… 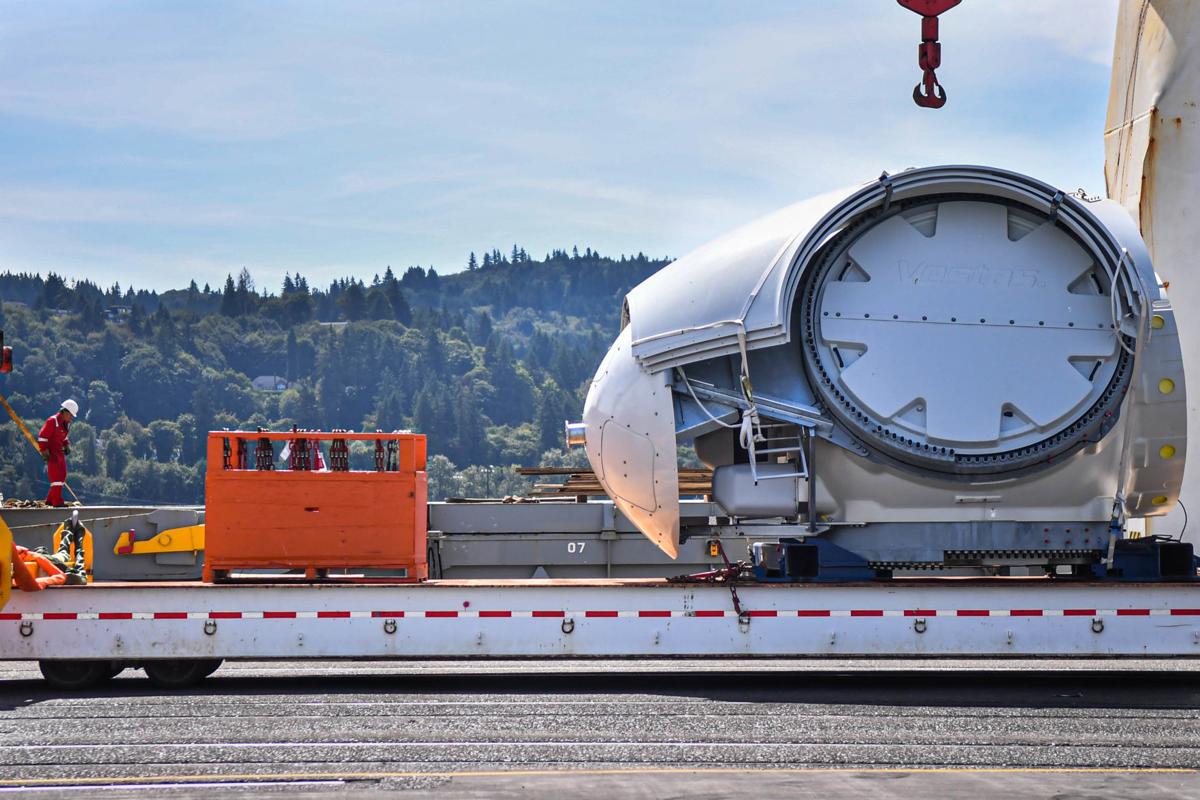 To the right, a large piece of a windmill sits on a truck bed waiting to be carted away after being unloaded from the ship. 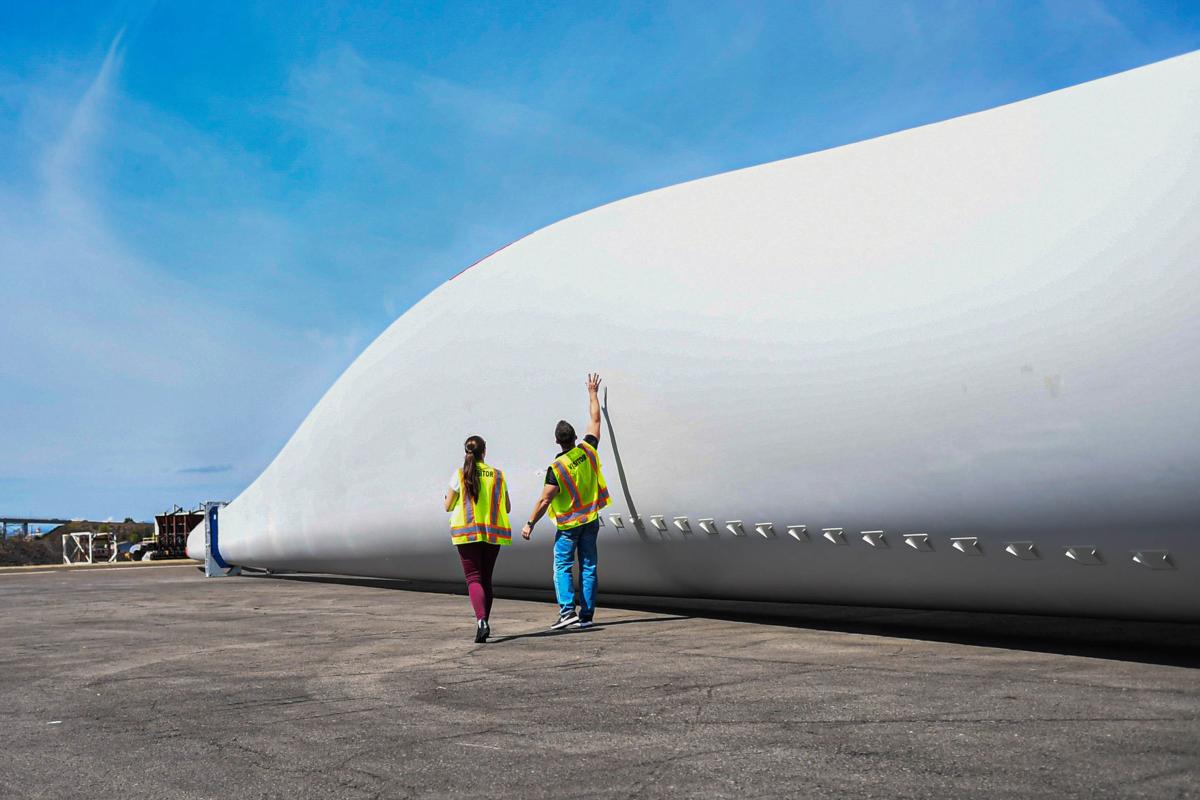 TDN reporter Mallory Gruben and Port spokesman Dan Polacek walk alongside one wind turbine blade stored at the port  before being hauled to the Skookumchuck Wind Farm in Lewis County. At 220 feet long, the blades for the Skookumchuck project are the longest handled by the port.