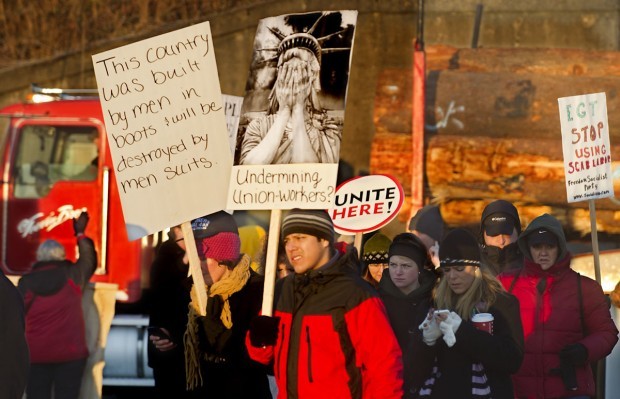 About 100 Occupy protesters marched in front of the main entrance of the Port of Longview Monday morning for about four hours. 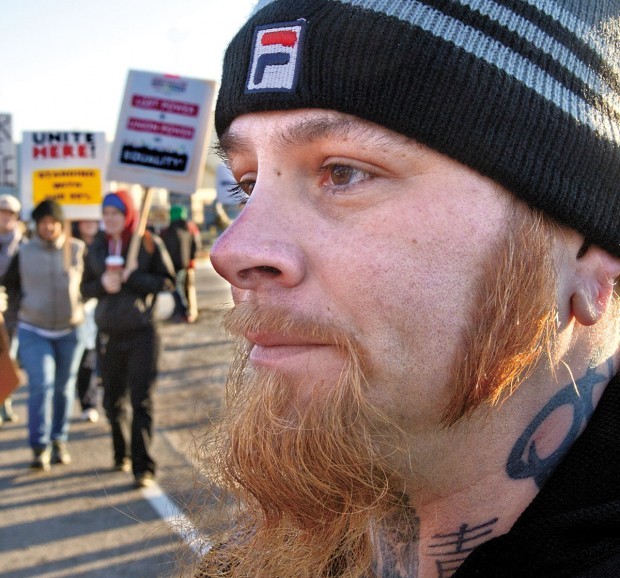 Paul Nipper of Longview organized the Port of Longview protest, which shut down the port for half of Monday. 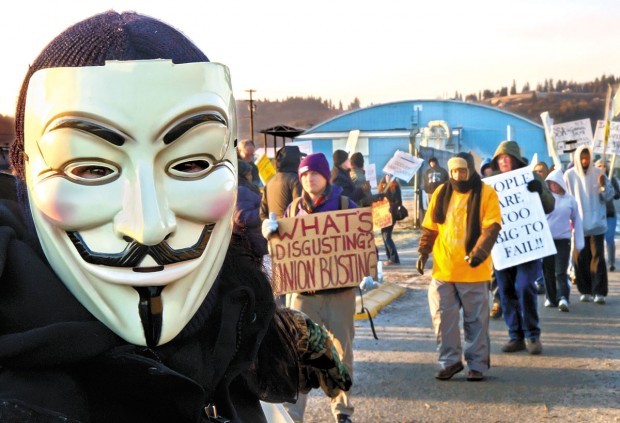 A protester wears a Guy Fawkes mask, common in Occupy movement protests, during a picket at the Port of Longview Monday morning. Fawkes is famous for a failed attempt to blow up British Parliament in the 17th century, and the mask has become a symbol of anarchists worldwide.

About 100 Occupy protesters shut down the Port of Longview on Monday morning, blocking a roadway and chanting support for union longshoremen in their labor dispute at the EGT grain terminal.

Occupy protesters declared victory at the port's main entrance on East Port Way in the shadow of the Lewis and Clark Bridge. They called ports a coastwide a tool for corporations to move goods and maintain their stranglehold on the middle class, while opponents questioned whether shutting down commerce was the movement's best tactic.

"We spoke up. They can afford to buy our politicians, but they can't buy our voice," said Paul Nipper, organizer of the Occupy Longview rally.

Union longshore leaders said the protest created a "health and safety" problem for dock workers trying to get to their jobs. The union negotiated with the Pacific Maritime Association, which represents shippers, to pay about 20 longshore workers for four hours they didn't work, said Dan Coffman, president of the union's Longview-based Local 21.

Protesters did not block anyone from getting to work, and two cars did make it through their line at East Port Way. However, longshore workers simply did not attempt to get past them.

A Longview police officer watched from across the street, but the demonstration was peaceful. Only two ships were in port, and port officials hoped to resume servicing them Monday night.

International Longshore and Warehouse Union leaders have shied away from endorsing the Occupy movement despite obvious sympathy from protesters for their cause. The union could face more heavy fines for violating a federal court injunction prohibiting the union from impeding commerce at the port.

However, Coffman said he can't discourage individuals union members from participating in the Occupy protests, which have brought nationwide attention to Local 21's dispute with EGT.

"It's quite an amazing thing that people up and down West Coast know what's going on in Longview," he said.

A longshore labor leader brought Starbucks coffee to some demonstrators, who were out on the chilliest morning of the season. ILWU members also gave rides to protesters to the EGT terminal later in the morning.

Just before 10 a.m., the Occupy group moved their protest to East Mill Road outside the $200 million EGT grain terminal. Two port security vehicle were posted outside, but protesters did not attempt to block traffic, and the picket remained peaceful.

The protest started breaking up about 10:45 a.m. when about half the group boarded a bus to return to Portland. Organizers said the rest also planned to join the protest at the Port of Portland Monday afternoon.

Protesters gathered at 5:30 a.m. at the corner of Oregon Way and Industrial Way, then walked to the port's front gates. To the beat of two drummers, they walked in a clockwise circle repeating a variety of chants blasting capitalist greed and supporting unions.

"Occupy, shut it down, Longview is a union town!" went one cheer. Another went after financial institutions: "Banks got bailed out, people got sold out!"

Occupy organizers have stated the coastwide protest is not just about supporting organized labor, but the Longview gathering was dominated by union support. A handful of marchers wore ILWU sweatshirts, and three carried longshore union signs. Others carried signs to support unions for carpenters, laborers, food and commercial workers and service employees.

Greg Cosmo, a Longview retired union carpenter, said he joined the protest because he was frustrated to see so many jobs for skilled trades workers leaving the area. As a retiree, Cosmo said he is doing okay, but he worries about lost opportunities for the next generation of carpenters.

"I'm one of the fortunate people that has a pension," he said.

Cosmo's wife, Suzanne, said most of the protesters from the Longview area were like her — middle class and worried about their future.

"These are the people it's affecting now. When it affects everybody, it becomes a revolution," she said.

About half of the protesters traveled by bus from Portland and Vancouver, and the gathering largely broke up when they left.

Kris Humbird, 33, of Portland, said he wanted to come to Longview to support longshoremen and unions in general. Unemployed, Humbird was fired from his job at a call center earlier this year for what he said was attempts to unionize his workplace.

"I think it was right to show solidarity and sympathy to our fellow workers," Humbird said.

Outside EGT, union painter Robin White of Vancouver said the Occupy movement includes a wide cross-section of people who are difficult to categorize easily.

"That doesn't always come across in the mainstream media," he said.

White added that protesters weren't seeking to block access to EGT, having already achieved their goal to shut down the port.

However, Larry Clarke, CEO of EGT, said Occupy protesters are ignoring the fact the grain terminal operates with union labor because it doesn't fit with their "political narrative." EGT employs 25 to 35 union operating engineers from the Gladstone, Ore.-based Local 701 hall, which represents Cowlitz and Clark counties.

The ILWU asserts EGT is legally obligated to hire union dockworkers, a contention the company disputes.

The grain terminal, which will employ about 50 workers, is an economic boost for Longview, Clarke said.

"Disrupting port activities makes it harder for U.S. manufacturing, the farm community and countless others to sell to customers and contribute to our nation's economic recovery," Clarke said in a written statement.

Port of Longview Commissioner Bob Bagaason, who drove past the protest on his way to the port's main office, said the shut down was not a positive move for Occupy movement.

"It's affecting everyday workers' jobs. It's shut them out of a job for a day. That can't be good for anybody," Bagaason said.

The Occupy group has given ports an undeserved black eye when they serve a vital role for cities on the waterfront, he said.

"Our job is to unload ship and to load ships. That's all we are, a service industry for the coast," Bagaason said.

Growing up in Ohio, Paul Nipper of Longview loved his civics classes and studying how government works, and he kept that passion alive in his …

The Occupy Wall Street movement is expanding its protest against income inequality and corporate greed to West Coast ports, promising to halt …

The U.S. Coast Guard will escort the first ship coming to the EGT grain terminal at the Port of Longview this month, and the Occupy movement a…

The first grain ship headed to the EGT export terminal is scheduled to arrive at the Port of Longview between 11 a.m. and noon Tuesday after d…

Law enforcement preparing for, but not expecting, another big port protest

Local and federal officials are prepared for the arrival of the first ship at the EGT terminal Tuesday, but they say they don't expect any lar…

No protest as grain ship docks at EGT terminal

Calm day at port a big relief for law enforcement

Law enforcement officials celebrated the uneventful arrival of the first grain ship at the EGT terminal in Longview on Tuesday, saying they we…

Union dock workers voted Thursday night to approve a five-year contract to work inside the EGT grain terminal at the Port of Longview, union a…

About 100 Occupy protesters marched in front of the main entrance of the Port of Longview Monday morning for about four hours.

Paul Nipper of Longview organized the Port of Longview protest, which shut down the port for half of Monday.

A protester wears a Guy Fawkes mask, common in Occupy movement protests, during a picket at the Port of Longview Monday morning. Fawkes is famous for a failed attempt to blow up British Parliament in the 17th century, and the mask has become a symbol of anarchists worldwide.