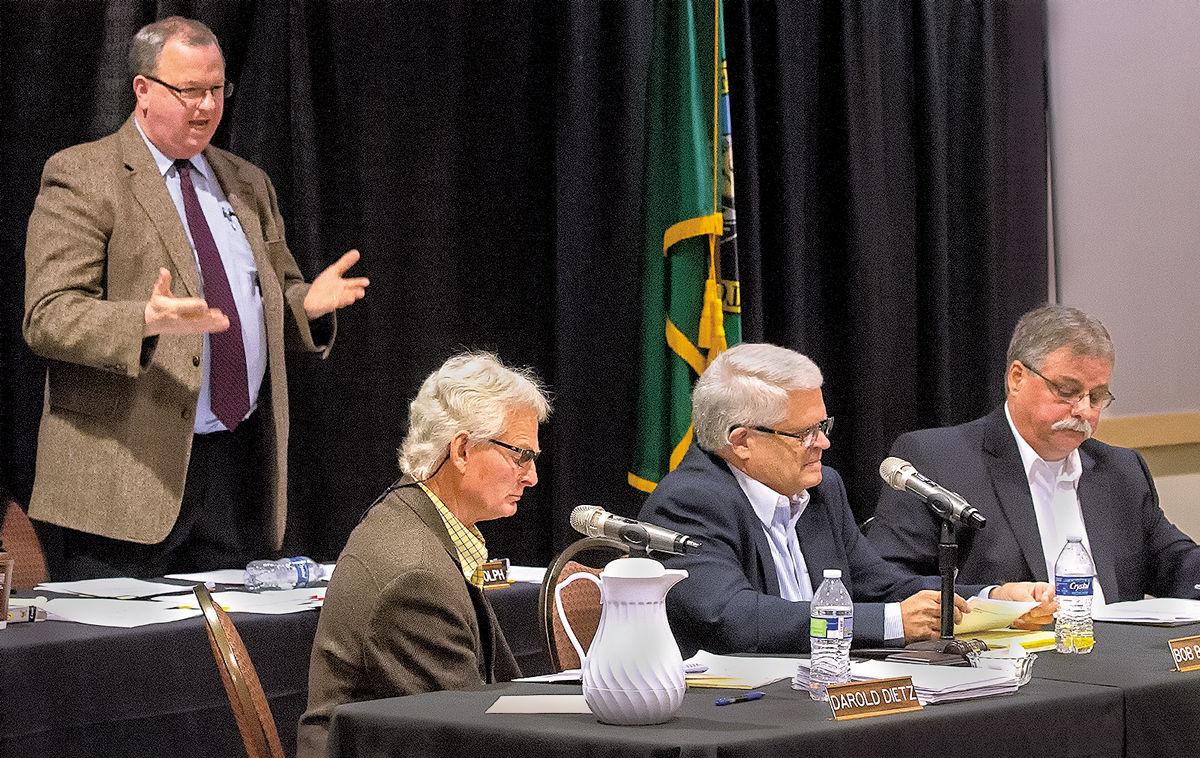 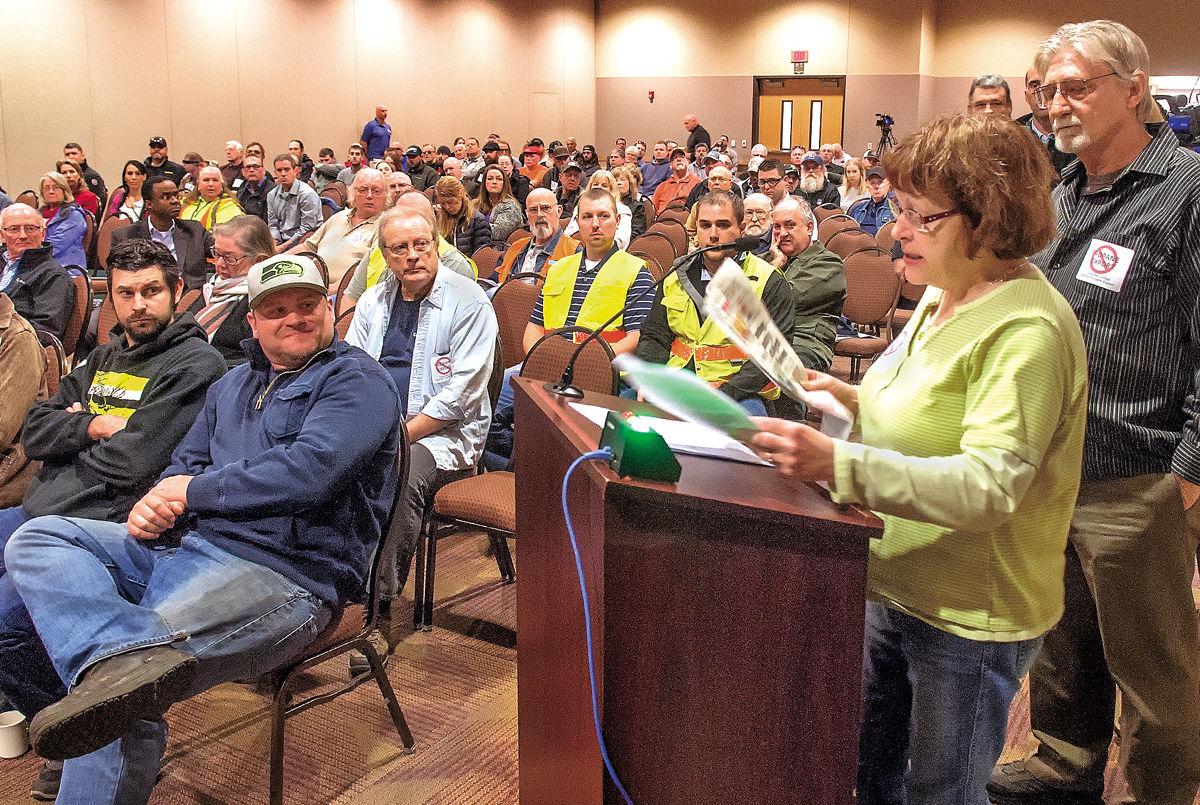 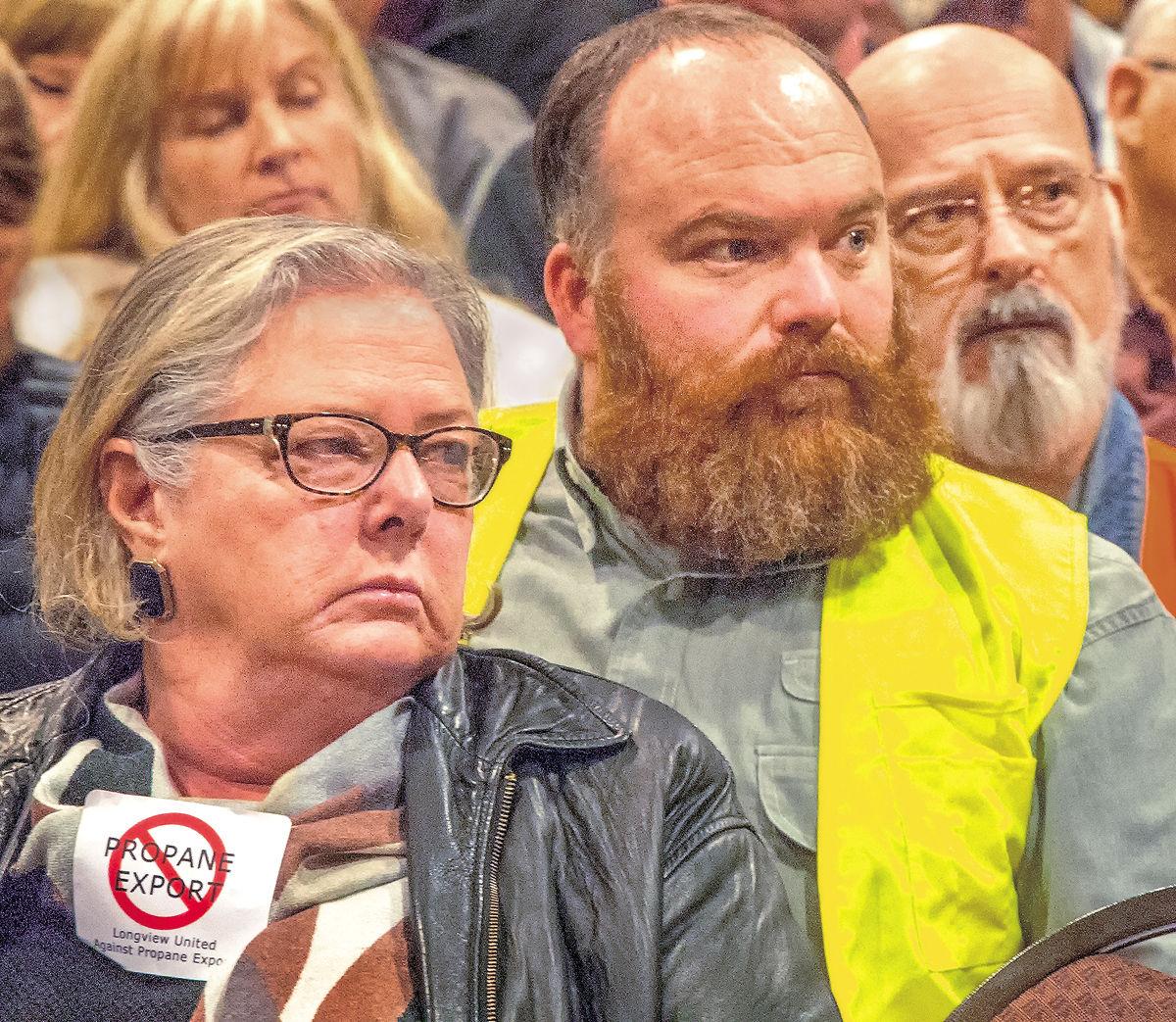 Longview resident Mary Lyons and Jeremiah Johnson, middle, and Hank Mroczkowski from the carpenters union await the decision of the Longview Port commissioners. 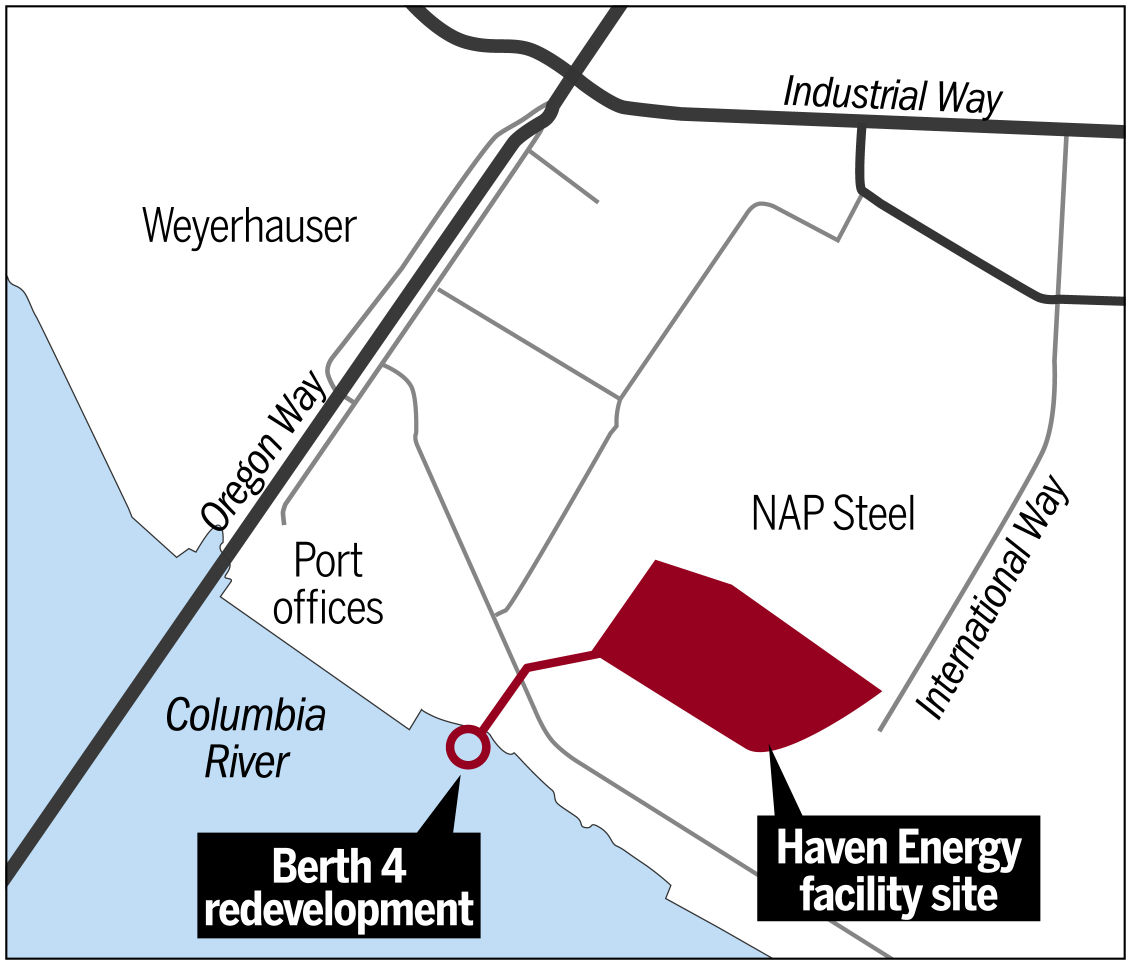 The Port of Longview is redeveloping its Berth 4, which Haven Energy plans to use to export propane and butane.

“Is this going to be worth that much to the port five years from now when it actually starts operating? I’m not seeing that,” Bagaason said.

Haven’s option to lease Berth 4 expires today. The port does not have plans to extend the lease option.

The vote came after 90 minutes of public comment featuring a primarily negative response from the crowd of nearly 200 people. More than 20 people spoke against the project, and half as many spoke in favor.

Dietz spoke for 20 minutes, saying it was “the most difficult decision in my eight years on the board.” Following the vote, Dietz said no one factor led to his vote.

“It was everything. ... I’m not afraid of the project, it’s a good, clean commodity needed worldwide,” he said.

But the proposed location — in the port’s “laydown” yard — just wouldn’t suffice, he said. “I think it was the right decision.”

Dietz and Johnson are retired longshoremen with strong ties to dockworkers union, which opposed the Haven plan. However, Johnson said the union’s opposition was just one of several factors he had to consider.

“I made my decision based on what’s right for the port,” he said. “There will be more projects that will come around.”

Bagaason said “Haven didn’t bring their A-game” to a Feb. 19 meeting with port commissioners meeting and that Haven President Greg Bowles couldn’t answer commissioners’ questions in enough detail. Bagaason also felt commissioners were brought into the lease negotiations too late in the process.

Haven said it will continue looking for a site for a terminal, locally as well as elsewhere. Haven officials estimated the terminal would be worth a half billion dollars to the economy over the next decade.

“We believe strongly in the project and the value it has to offer to communities as well as the company. We will continue to look for any avenues to complete the project that can provide so much benefit to so many people,” Bowles said following the vote.

“We will continue to work with Haven if they’re interested,” Mike Bridges, president of Kelso-Longview Building Trades Council, said, adding that he was “surprised” and “disappointed” by commissioners’ decision.

“I hope this decision doesn’t influence other businesses that are looking to possibly locate in our region,” Bridges said.

“We’re happy and glad the port commissioners valued the long-term economic potential, health and safety of our community over short-term profit and corporate greed,” Diane Dick of Longview said after the vote.

A large crowd of both supporters and opponents filled the Expo Center on Tuesday to give last-minute pitches to the port commissioners.

David Hahn, a regional carpenter’s union representative, told the port commissioners, “This project would be huge” and provide family income to support children. “We are in support as the carpenters.”

That drew applause, but more noise came following the next five speakers, who said the project would not create enough jobs and would pose unacceptable safety risks.

Anne Bennett, an independent medical recruiter from Longview, said, “If this project is approved, Longview will continue to attract controversial industries that are undesirable to other communities.”

Still, local construction laborers and their representatives who stand to benefit the most in the short term touted the project as positive overall.

“When you have a project of this magnitude, everybody benefits,” said Lee Newgent, executive secretary of Washington State Building and Construction Trades Council.

Rick Von Rock, a retired pulp and paper union leader from Kelso, took issue with critics’ slogan that “we can do better” than a propane or coal terminal.

“We haven’t,” he said. “Let’s work with what will come here and make the best of that.”

If today’s Haven opponents had been alive around in the 1920s, Von Rock said, there would have been “no Longview Fibre, no Weyerhaeuser, no reason for the port.”

“Why would you take such a gamble?” she asked, saying the jobs are not worth the safety risks to life and property.

Where do we, and the port, go from here?

The question on everyone’s mind at the Cowlitz County Expo Center following the Port of Longview Commission’s unanimous rejection of Haven Energy’s proposal to build and operate a propane and butane export terminal at the port’s Berth 4 was some version of “What happens next?”

March 14 Letters to the Editor

March 26 Letters to the Editor

Do you support or oppose Haven Energy's plan for a propane/butane export facility at the Port of Longview?

Booming industry a catalyst for Haven

More than a year ago, Greg Bowles and a friend flew in from Houston, rented a car and drove along the West Coast. They weren’t on vacation. They were searching for a place to build a multimillion-dollar propane export terminal.

Greg Bowles projects a satellite night image of middle America on a large screen. On the right is cluster of city lights from Minneapolis. On …

Three years ago, Shawn Nyman found herself at a massive labor protest at the Michigan state capitol. Thousands of people were protesting a rig…

Here are some of the key points from Haven Energy representatives regarding facility safety. Some come from Daily News research and outside in…

Longview union contractor JH Kelly is on the short list of potential firms to build the proposed $275 million liquid propane and butane terminal at the Port of Longview, Haven Energy officials announced Thursday.

Lease negotiations between the Port of Longview and Haven Energy hit an unexpected hang-up this week. The two parties had originally planned t…

After more than eight months of negotiations, the Port of Longview announced Tuesday it is close to completing a lease agreement with Haven Energy.

The Port of Longview is projecting another year of record revenue in 2015, but rising costs will eat into its profits, according to a prelimin…

The Port of Longview is planning a $10 million expansion of its railroad corridor, saying additional tracks would be needed by new employers i…

Two months after lamenting a lack of progress, Port of Longview officials said they are “finding common commercial ground” in lease negotiatio…

Contract negotiations have hit a snag between the Port of Longview and a Texas firm that wants to export liquid propane and liquid butane, pos…

Billions of dollars of investment in industrial projects will send at least 850 to 1,000 additional ships sailing up the lower Columbia River in the next four or five years, and the number could rise as high 1,500.

Just in the way they introduced their proposed propane and butane export terminal for the Port of Longview last week, Haven Energy officials a…

Jeff Wilson to run for Port of Longview commission

Longview businessman Jeff Wilson announced Tuesday he is running for the Port of Longview position now held by Darold Dietz, saying he wanted …

Longview resident Mary Lyons and Jeremiah Johnson, middle, and Hank Mroczkowski from the carpenters union await the decision of the Longview Port commissioners.

The Port of Longview is redeveloping its Berth 4, which Haven Energy plans to use to export propane and butane.