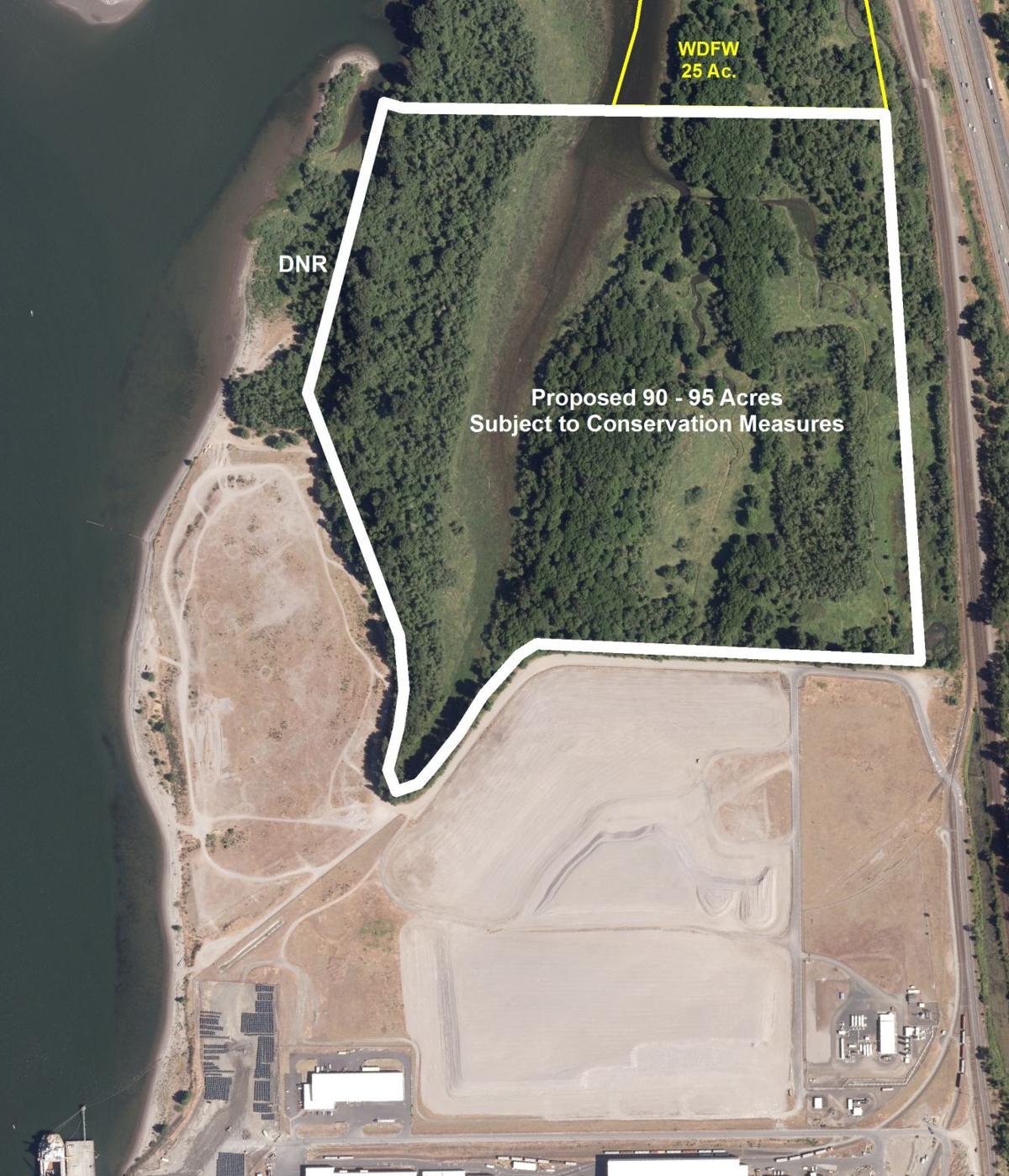 A satellite image shows the proposed conservation acreage north of the planned methanol plant site. At left is the Columbia River.

Is the Port of Kalama giving up too much land for the Northwest Innovations methanol project? Will a 90-acre conservation set-aside undercut future development?

Cowlitz County Hearing Examiner Mark Scheibmeir on Monday approved two shoreline permits that would require the port to conserve 90 to 95 acres of land to compensate for the plant’s impact on the environment. The conservation area would be about as large as the plant site itself, meaning that the port would devote a total of about 180 acres to the $1.8 billion project

The plant is expected to generate 1,000 construction jobs and 192 permanent jobs, or about one permanent job for every acre of port-owned land the project will use. Port officials say the project is worth the acreage it’s using up.

“We feel like, evaluating it from the perspective from our mission, it is a good return,” Newman said. In addition to the job creation, the port also will be earn revenue from the lease and from use of the wharf that Northwest will use to ship its methanol, she said.

Early on, commissioners and port staff had discussed setting aside 60 to 65 acres of land for the project, with the understanding that an additional 30 acres nearby already was under a protective status from a previous project that never materialized. Eventually the port offered to place 90 to 95 acres into a restricted covenant prohibiting development.

“This restrictive covenant it is a very powerful thing and it does mean something, not only to us, but the (environmental regulatory) agencies,” Newman said.

Port officials said setting aside the additional land won’t impede its efforts for bring future industrial projects to the port. There are other mechanisms to compensate for environmental impacts of a project other than setting aside land, such as pitching into “mitigation banks” and other off-site conservation projects, Newman said.

The 90 to 95 acres of mitigation land would not be easy to develop on its own, said Ron Melin, senior environmental planner with Cowlitz County Building and Planning. The area is designated forestry-open space in the county comprehensive plan, he said, and the shorelines falls under a conservancy district.

“Their proposal to set aside all that land is not really meaningful because they’re not really able to develop that land anyways,” said Miles Johnson, clean water attorney with Columbia Riverkeeper. “It’s home to endangered species like salmon, steelhead and white-tailed deer,” so developing it would be challenging. Johnson added that the proposed mitigation plan won’t compensate for the plant’s effects on climate change as a large emitter of greenhouse gases. (See related story on greenhouse gas emissions.)

In addition to the mitigation land, the hearing examiner’s decision sets multiple other conditions, such as requiring the company to follow through on its promise of production methods to cut down on its greenhouse gas emissions and eliminate all wastewater discharge into the Columbia River.

“The shoreline permit is an important permit for the project, and the hearing examiner’s decision is an important milestone. We are pleased that the hearing examiner and the county staff recognize the profound benefits this project would bring to local, state, national and global communities in reducing global greenhouse gas emissions and eliminating facility wastewater discharge into the Columbia River,” Vee Godley, president of Northwest Innovation Works, said in a prepared statement.

“The hearing examiner’s decision, however, imposes stringent conditions for environmental protection and mitigating the potential impacts of the project, which require a thorough review to understand the full impact on the construction and operation of the facility,” Godley added.

The hearing examiner’s decision will formally go to the state Department of Ecology next Tuesday, Melin said. From there, Ecology will have 30 days to approve or reject the permits, or to approve the permit with modified conditions. If Ecology approves, opponents already have vowed to appeal the decision to a shoreline hearing board, in addition to challenging the adequacy of the state environmental impact statement on the project.

FACT CHECK: Would the plant be biggest greenhouse gas emitter in the state? PAGE A4

In his 100-page decision on shoreline permits for the proposed Kalama methanol plant, hearing examiner Mark Scheibmier appears to have erred w…

A satellite image shows the proposed conservation acreage north of the planned methanol plant site. At left is the Columbia River.