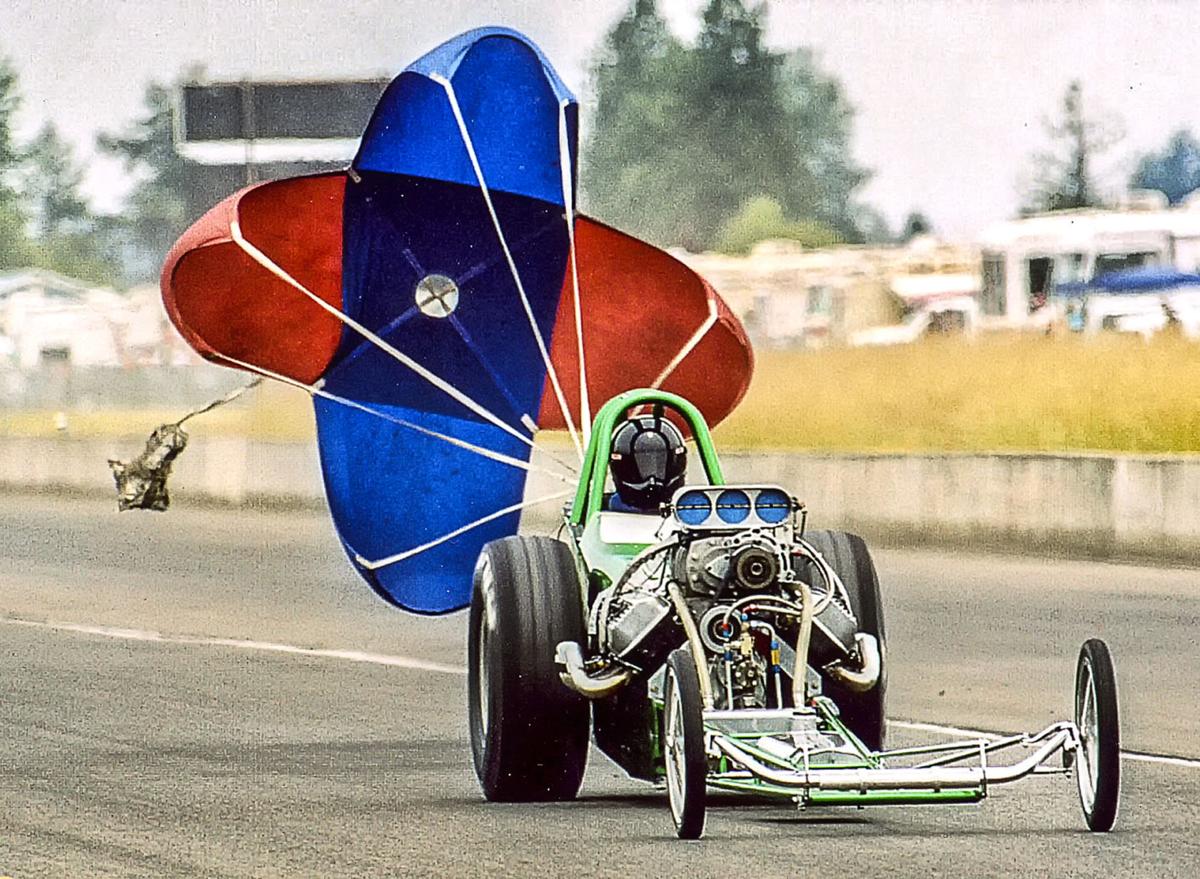 Don Gorans slows his ride at the Woodburn Dragstrip south of Portland in one of many of the family's drag races about a decade ago. The green rail will make its last runs this weekend as the 1960s-style racing association championed by Ron Gorans burns its final quarter-miles. 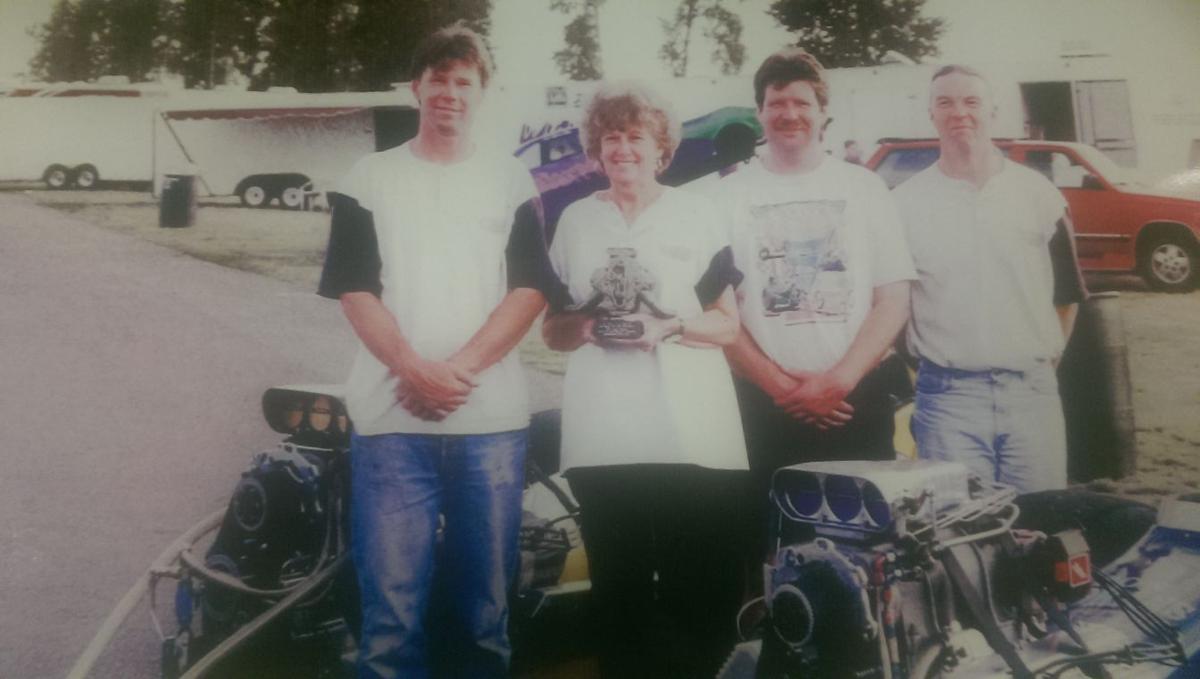 The Gorans brothers and their mother, from left, Dan, Lois, Dennis and Don, pose with the Ron Gorans Memorial Trophy in June 1997, the year after Ron Gorans died. 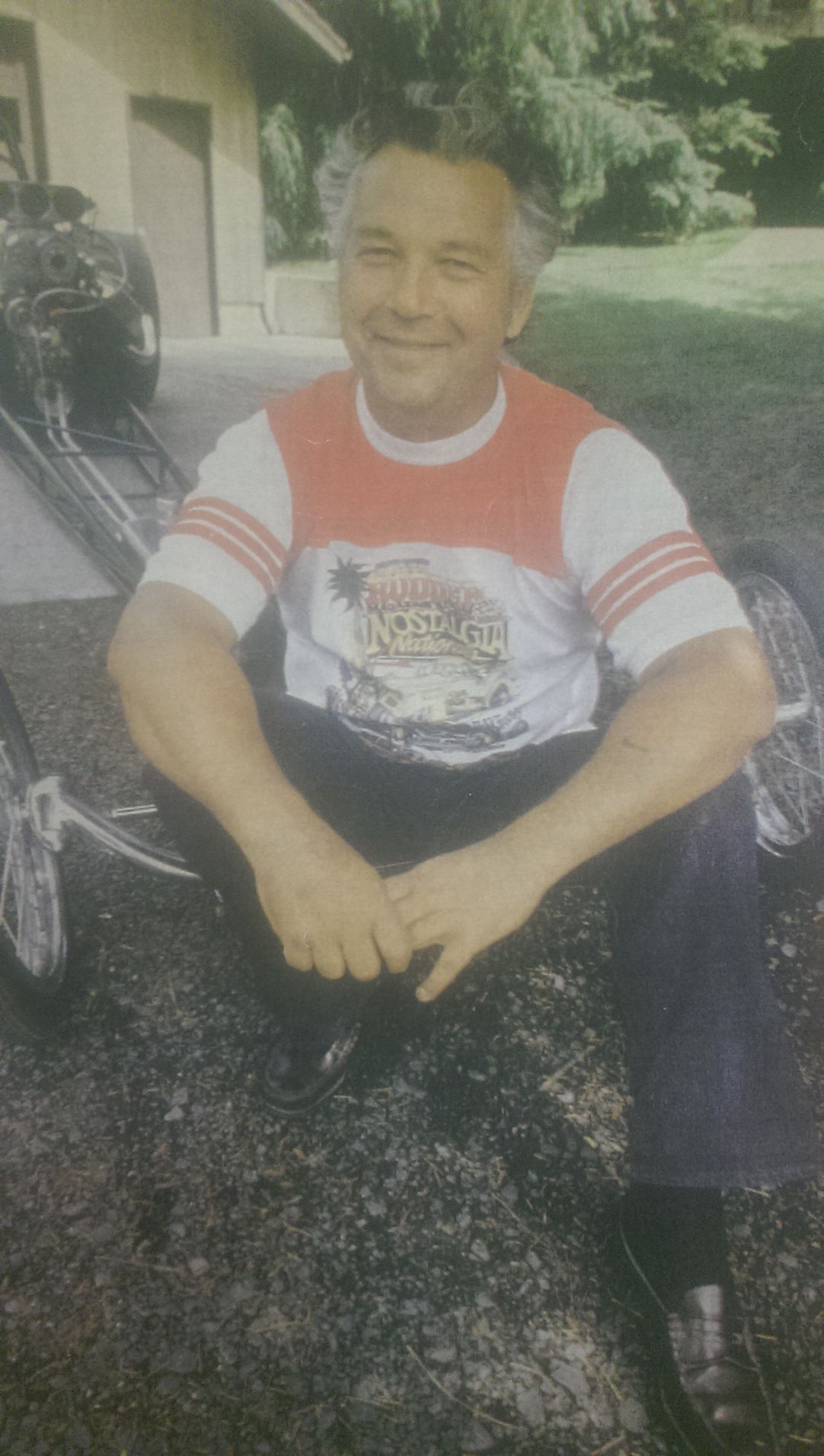 Ron Gorans poses in front of his dragster in 1986.

No matter the length of the track, all races must come to an end.

And Longview’s Gorans boys took a few extra laps on their way to finishing the racing their father, Ron Gorans, started.

“Little did we think that 20 years after he passed away we’d still be doing it,” Don Gorans said.

But there they are, burning up the quarter-mile in 1960s-style dragsters, going from 0 to 200 mph and back again in seconds.

Blink and you’ll miss them forever.

An email sent in spring spelled the end of the Northwest Nostalgia Top Eliminator Association and its brand of drag racing. And it spelled it out very clearly. “The Last Drag Race.”

This weekend, the last of the direct-drive front-motor dragsters will assemble at the Woodburn Dragstrip south of Portland.

The format has lost favor among drag racers, and the association itself is aging. Out goes the parachute one last time.

For the Gorans, it marks the end of a family brand and a father’s passion that has lasted 60 years.

Ron Gorans started Northwest Nostalgia in 1989 along with sons Don, Dan and Dennis, friend Jim Dillinger and Woodburn Dragstrip owner Jim Livingston. It was a way to get back to the drag racing Ron started in the 50s and left in 1970, when “the pros were trying to make it a living instead of a pastime,” he told The Daily News in 1994.

But Ron said he “got the bug again” in the 80s and set out to recreate his racing experience — engine ahead of the driver, no transmission, and just a barebones rail of a body.

“Everyone else says, ‘The engine is supposed to be back there,’ but it looks natural to me” in front of the driver, Ron told the paper in 1986.

The style of racing was less expensive, too, meaning more people could join in as a hobby.

Some of those people just happened to be Ron’s sons.

“My dad had quit, he thought he was done and wanted nothing to do with it,” Don said. “Little did he knew he’d start us all back into it.”

The first time around was a little rough on the brothers, but like the appeal of the cars themselves, Ron improved with age.

“When he was younger he wasn’t a very good teacher. He was focused on the car,” Don said. “When we started doing it this time, he basically said, ‘You’re coming up and working on it, and I’ll help you.’ “

Which meant when Ron died suddenly in 1996, the races could go on.

“Right before he passed away, he built the one we’re racing right now,” Don said.

That green methanol drinker — as opposed to using the more powerful nitro methane fuel — will burn rubber this weekend along with a handful of other vintage dragsters at the 27th Annual Hot Rod Nationals in Woodburn.

The car will be stored, though it could well get a few more runs in after the races Saturday and Sunday. But, for the time being, this is the end of the Gorans’ road.

“There’s less and less interest in the way we had it set up,” Don said, adding that the age of Northwest Nostalgia’s members is another reason the group is folding.

At the peak of Northwest Nostalgia Racing, the family participated in about eight races a year.

Those racing days will be missed, but Don wasn’t shedding any tears. He and his brothers took what they needed from it.

“I think we learned more from him in those years than any other time.”

When: Today and Sunday starting at noon

Collision on I-5 near Kalama blocks right lane Thursday

A collision on the I-5 northbound near Kalama blocked the right lane around 11:15 a.m. Thursday and was cleared around noon.

KALAMA — Northwest Innovation Works on Friday notified the Port of Kalama it will terminate its lease, ending its seven-year effort to build a…

The lack of available properties and record-low mortgage rates means more people are trying to buy fewer homes, causing prices to spike and making affording a home today in Cowlitz County — like the rest of the country — more difficult.

Don Gorans slows his ride at the Woodburn Dragstrip south of Portland in one of many of the family's drag races about a decade ago. The green rail will make its last runs this weekend as the 1960s-style racing association championed by Ron Gorans burns its final quarter-miles.

The Gorans brothers and their mother, from left, Dan, Lois, Dennis and Don, pose with the Ron Gorans Memorial Trophy in June 1997, the year after Ron Gorans died.

Ron Gorans poses in front of his dragster in 1986.