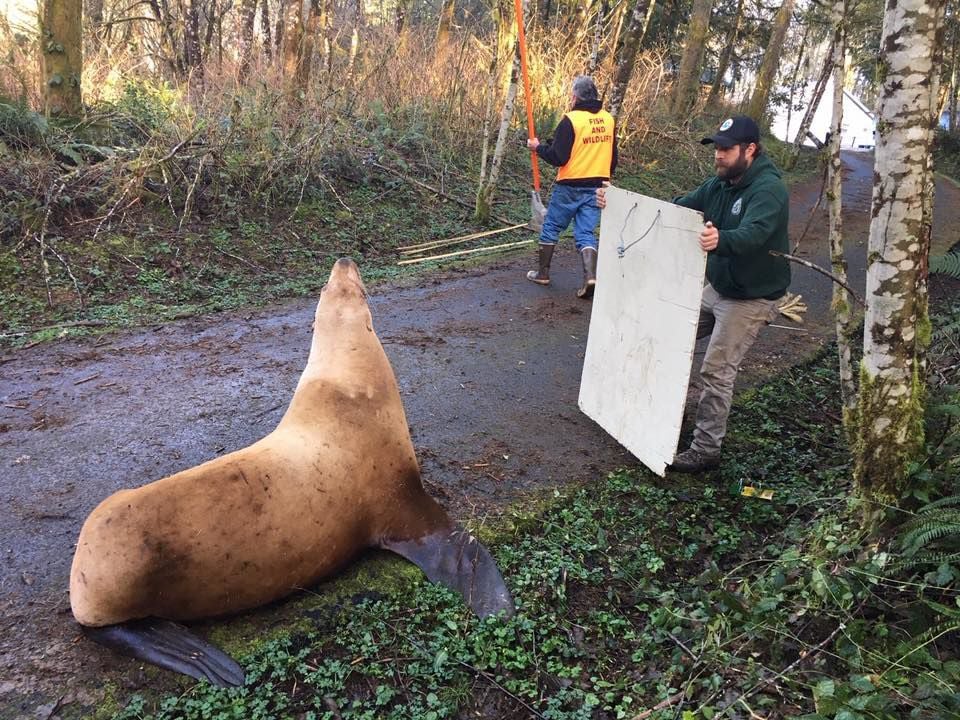 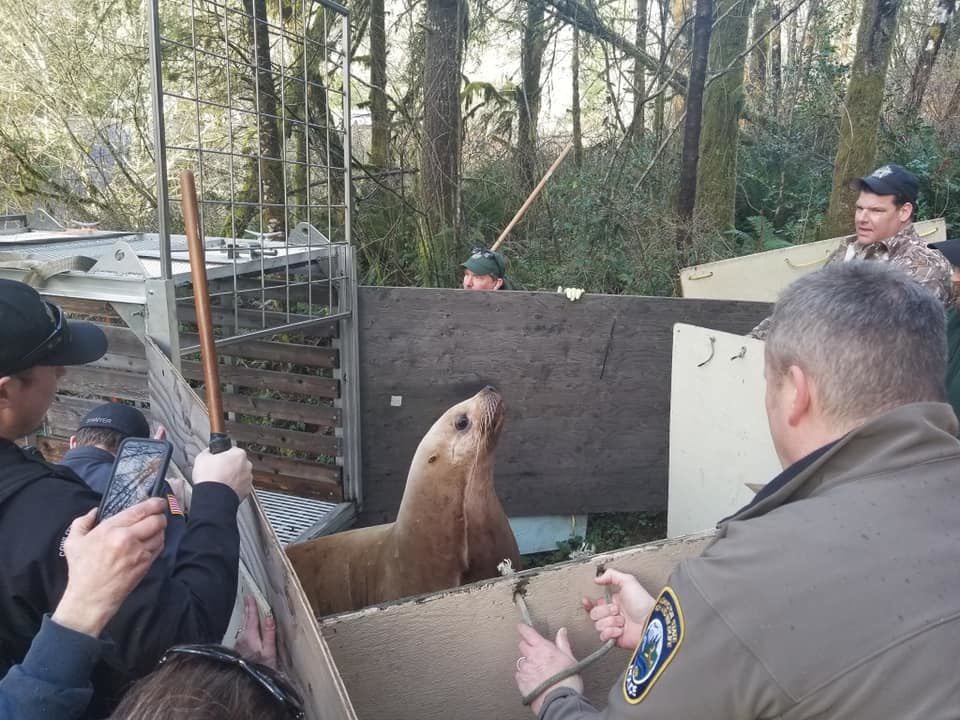 A wayward Stellar sea lion was returned to the Columbia River Sunday afternoon after she was spotted on a country road about three miles west of the Cowlitz River and Castle Rock on Saturday evening.

Although she was “exhausted,” the hulking marine mammal “charged many times” and growled loudly at responding officials as they tried to corral her on Garlock Road, Cowlitz County Sheriff’s Sergeant Corey Huffine said Monday.

“Luckily it doesn’t have claws or anything like that,” Huffine said. “We just had to watch out for the mouth.”

“It was crazy,” Garlock Road resident Rodger Vinton, a retired Longview Fibre Co. millwright, said Monday. He said he’d never seen such a sight in his 50 years living on the isolated rural road.

Although it’s unclear how the sea lion made it so far from water, Huffine said deputies believe she may have come up the Cowlitz River and Delameter Creek until the water eventually became too shallow.

Vinton speculates the animal made it up a small creek off Delameter Creek, and that it would have had to climb up some steep terrain to get to his neighborhood near the intersection of Garlock and Hazel Dell Road.

Saturday night, “people were trying to get pictures. The only time (she) was aggressive is if they got too close. ... (She) lunged at them several times,” Vinton said.

When he and his wife drove to church Sunday morning, Vinton said, the sea lion was in the road. They drove around her and “(she) kind of pointed (her) nose straight up as if to say, ‘What’s going on?’ “ Vinton said.

Huffine said the sea lion “was exhausted. It had walked a long way. A 600-pound sea lion isn’t made for walking on the road.”

But the pinniped was not in the mood to be moved.

Officials discussed tranquilizing the animal, Anderson said. But they only had darts on hand for deer and elk.

“If you overdose it you’ll kill it, and if you underdose it, it just doesn’t work,” Anderson said. “We’d probably have to shoot four or five darts at it. Based on size and body composition, we just didn’t have the tools.”

And regardless, the hide of the sea lion may simply have been too thick for the darts to reach its bloodstream, Anderson said.

So officials from the sheriff’s office, Fish and Wildlife and the Cowlitz County Humane Society used large wooden boards to pen the sea lion in and corral her into a trailer provided by wildlife officials Sunday.The sea lion had gone into someone’s driveway, Huffine said, so officials smacked the ground nearby and tapped the sea lion with a long stick to prod her toward the truck.

“You can’t do that with feet or hands, (because) she’s liable to just bite you,” Anderson said. “We’ve all seen the video of a seal or sea lion coming up with a fish in their mouth. ... Imagine if that was your arm in its mouth, and it decided to give you a toss. It’s going to absolutely destroy you. … Your body weight is going, she’s gonna shift and twist, and it’s just going to turn your arm into Swiss cheese, probably rip it apart.”

After capturing the sea lion, officials released her into the Columbia River at the Willow Grove Boat Launch Sunday afternoon, Huffine said.Had the capture been unsuccessful, WDFW officers were given permission by the local National Oceanic and Atmospheric Administration office to euthanize the sea lion, Anderson said.

It’s not uncommon to see seals and sea lions far up the Cowlitz River near Castle Rock during the smelt run, but none has ever been reported in the middle of a wooded, rural road so far from the river before.

“That smelt run is so big that there’s fish in every little creek and offshoot of the Cowlitz,” Anderson said. “I think she just followed fish, and she got sidetracked or turned around as to where she was.”

In his 28 years at the sheriff’s office, Huffine has dealt with “cows, horses, dogs, peacocks and even some emus,” but this was the first time he’s responded to a sea lion on land.

Complaints about exploding sea lion and seal populations, and their impact on threatened fish stocks, have been growing for a couple decades. Stellar lions, on the other hand, are considered “near threatened” by the International Union for Conservation of Nature.

Stellar Sea Lions range across the entire North Pacific region, from Asia down to the U.S. Coast. The western population (from Alaska to Japan) is listed as endangered. However, the “eastern” population (the portion off the U.S. mainland and British Columbian coasts) has been growing steadily in the past three decades, and the National Marine Fisheries Service has proposed removing it from the Endangered Species Act List.