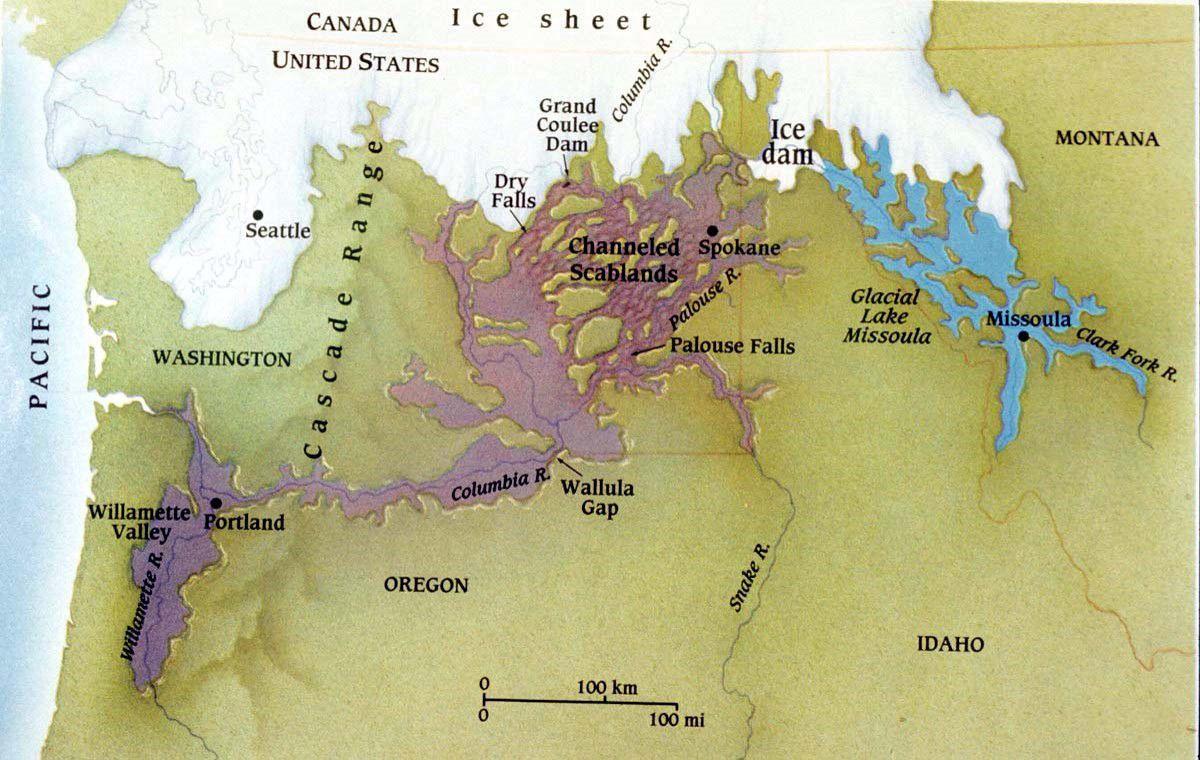 This map shows the path of the Missoula Floods, which released up to 530 cubic miles of water from Glacial Lake Missoula when they swept across the region agout 15,000 to 18,000 years ago. 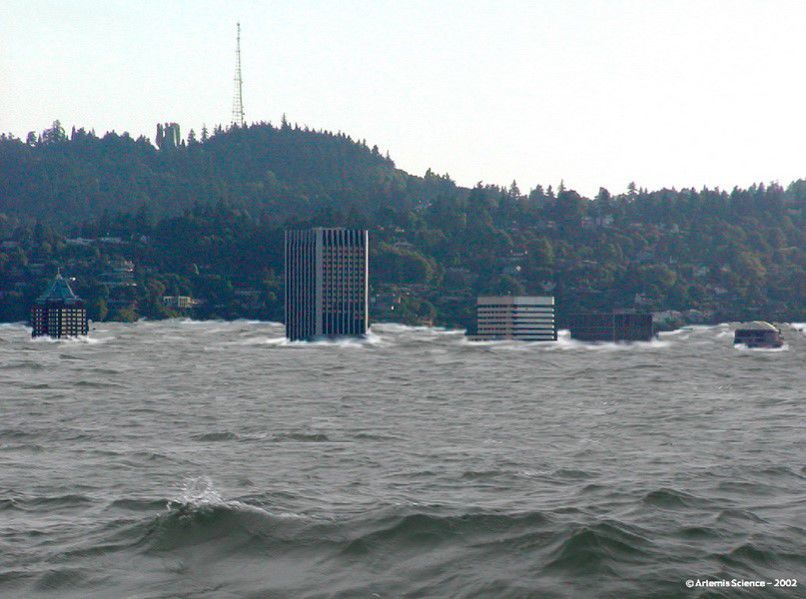 This photoshoped photo of Portland shows what the city might look like if the Ice Age-era Missoula Floods happened in modern times. 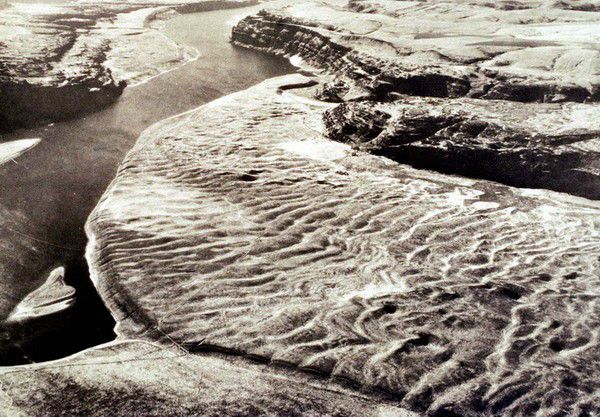 These giant current ripples on West Bar in Wenatchee, Wash., show leftover signs of the Missoula Floods, which reshaped the Pacific Northwest landscape near the end of the Ice Age.

With a trained eye and inquisitive nature, Pacific Northwesterners can easily find signs of the Biblical-scale floods that swept through the region and reshaped the landscape 15,000 years ago.

In Cowlitz County, the sandy flatlands that run along the Columbia River and most of the islands between Longview and the coast are legacies of the cataclysmic floods that roared out of the upper Columbia Basin during the last Ice Age, said Scott Burns, professor emeritus of engineering geology at Portland State University. In Eastern Washington, the scablands bear witness to the scoured, now dry flood channels left behind thousands of years ago.

“Mother nature is talking to us and shouting out to us all of the time. … Everywhere you look there is a story,” Burns told members of the Longview Noon Rotary during a lecture Wednesday.

For geologists, the story of the Missoula Floods, one of the greatest geologic events in North America, reshaped modern understanding of how landscapes form.

Scientists estimate that 90 cataclysmic floods swept through the region 15,000 to 18,000 years ago. The floods started at Glacial Lake Missoula (in present-day Montana and Idaho), formed when glacial ice sheets repeatedly dammed the Clark Fork River (a Columbia River tributary). Eventually, as the water got hundreds of feet deep, the ice dams gave way and released floods of nearly unimaginable proportions.

Each flood was slightly smaller than the one before it, and only about 40 made it all the way to Portland, Burns said. But the first time the dams broke marked the world’s biggest glacial flood event.

During each flood, water rushed across the Spokane Valley and most of Central Washington, emptying into the ocean from the Columbia River. As the water flowed through the river at rates 10 times the total of all the world’s current rivers combined, it reshaped the surface of the land.

In some places, where the river narrowed or turned, the water backed up into three large lakes. The last of these was Lake Allison in the Willamette Valley. Lake Allison covered an area nearly 150 miles long, with banks starting at present-day Kalama and extending south to Eugene, Ore.

“We had a lake here for two to three weeks, 400-feet deep,” Burns said from a podium in the Cowlitz County Event Center.

Though widely accepted today, the idea that landscapes changed by catastrophic events like the Missoula Floods took root less than 100 years ago.

For most of the 19th and 20th centuries, geologists thought the land changed slowly. But J. Harlen Bretz, then a professor at the University of Washington, insisted in the 1920s that catastrophic events could change the land.

Specifically, Bretz argued that a flood of unfathomable proportions swept through this region, leaving behind the modern day topography. In a 1923 research paper, Bretz pointed to the channelized scablands of Central Washington and other regional landscapes as signs of the flood.

“He was seeing these (signs) all over the Pacific Northwest, and he said, ‘It sure looks like a big flood came through here,’ ” Burns said.

But Bretz couldn’t identify a source of water capable of producing such massive floods because he didn’t know about Glacial Lake Missoula, so other scientists rejected his idea, Burns said.

About two decades later, scientists started warming up to Bretz’s idea when a fellow scientist, J.T. Pardee, publicly pinpointed the lake as the source for the floods. Pardee waited until 1942 — after he’d retired from the USGS — to publish a paper on the subject to avoid risking his job for voicing a controversial opinion, Burns said.

Years later, the idea of catastrophic change in landscape became accepted in geology. And the scientist who first suggested the theory lived to age 98, long after the detractors who through he was wrong had died.

“It explains why you have the typography you have. … It answers where you should build and when you should not build,” he said. For example, the Missoula Floods left behind wind blown silt in the hills above county flatlands, which can cause landslides. Understanding how the sandy soil got to the hills and how it moves over time can help builders avoid a slide zone, Burns said.

“In the Pacific Northwest, people love geology. … They are interested in what they are seeing outside,” Burns said. “I give these talks to get people outdoors and asking questions (about the landscape).”

KALAMA — Wendi Axelson-Ross, 57, spends her free time searching for geologic treasures near her Kalama home. The rockhound said the windows in…

This map shows the path of the Missoula Floods, which released up to 530 cubic miles of water from Glacial Lake Missoula when they swept across the region agout 15,000 to 18,000 years ago.

This photoshoped photo of Portland shows what the city might look like if the Ice Age-era Missoula Floods happened in modern times.

These giant current ripples on West Bar in Wenatchee, Wash., show leftover signs of the Missoula Floods, which reshaped the Pacific Northwest landscape near the end of the Ice Age.