You can tell an out-of-towner from a local in Castle Rock by how they drive across the Cowlitz River.

Visitors usually drive straight across the PH 10 Bridge, taking the jarring ride through dozens of patched and open potholes. Locals, though, often weave around the divots or straddle the ruts, joked school district Superintendent Ryan Greene.

“It’s just one of those things. ... When you are here and you drive past it every day, you get used to it,” Greene said.

Local residents have grumbled about the bridge’s roadway for years. Patching done by the Washington State Department of Transportation, which maintains the roadway, has done little to smooth the drive.

But relief is on the way. WSDOT plans to completely redeck the 60-year-old span next year. The $4.6 million upgrade will add a new surface and improve safety by widening the sidewalk for pedestrians and bicyclists. Federal grants will fund almost 86% of the project, with the state financing the rest.

The city has been encouraging WSDOT to redeck the span for 10 years, “so we were excited when we heard that it actually got up to a point where we would be considered to be a project in the near future,” said City Public Works Director Dave Vorse.

Cowlitz County built the bridge in the 1950s, and the deck is due for an upgrade, Vorse said. The steel girder bridge may never have been redecked, and the roadway at least has not been replaced in the 38 years Vorse has worked for the city.

The bridge has endured mud flows from the 1980 Mount St Helens eruption and the historic Cowlitz River floods of 1995-96. Logs, boulders and other river debris have rammed its concrete pilings. Nevertheless, the span is in “great shape” structurally, said Steven Rosane, WSDOT project design team leader. Only the concrete road deck needs replacing, he said.

“It’s just really beaten up. ... I haven’t seen a bridge with that many patches. It just says a lot about that bridge: It’s taken so much abuse from the number of vehicles and heavy vehicles that are on it,” Rosane said.

Preliminary designs for the new bridge surface include two 10.5-foot vehicle lanes, a 4-foot-wide shoulder on the south side of the bridge and a 6-foot-wide sidewalk on the north side. Those upgrades will replace the two, 3-foot sidewalks currently bordering the roadway, Vorse said.

The wider shoulder and sidewalk will “provide an area for someone to ride bikes safely and be on the sidewalk safely,” Vorse said. “We see that as a big benefit, especially with the school and the sports complex out there on the west side (of town).”

Greene said the school district is particularly happy about the sidewalk expansion because a lot of students walk over the bridge to and from the high school, which is located on the river bank opposite the main part of the city.

“It will be nice to have the additional space on one side. … Right now we have a bunch of kids that live in town, and they are picked up at the middle school and taken to the high school (by bus) to avoid (walking) that stretch of road,” he said.

The city started working with WSDOT around 2017, when the agency started scoping a project to update the bridge, which also is known as the A Street Bridge, or just “the bridge.”

WSDOT had been patching the bridge deck “at minimum one time a year” for several years, based on condition reports. Eventually, maintenance crews said WSDOT “needed to look at a long-term fix,” Rosane said

“The deck has deteriorated significantly in the last four or five years, so I think that’s brought it higher to their attention,” Vorse said.

The four-year wait between scoping and construction is due in part to time needed to secure funding and coordinate construction schedules with a city-led effort to replace water and sewer mains under the bridge, Rosane said. (The city wants to replace the water and sewer mains to “upsize for future growth,” Vorse said, and it plans to use the same contractor as WSDOT for cost efficiency. The replacements are estimated to cost $1.6 million to $1.8 million, Vorse said.)

Nearly 6,000 vehicles pass over the bridge daily, and about a third of the traffic, or about 2,000 vehicles, is trucks, Rosane said. All of the school district’s buses cross the bridge at least twice a day, Greene said.

Instead of rerouting traffic to bridges in Lexington or Vader, WSDOT plans to keep at least one lane of the bridge open throughout construction. And crews will try to limit any necessary closures to overnight, Rosane said.

Construction is tentatively slated to start spring 2021 and end near the end of that fall, Rosane said. The intention is to do most of the work over the summer, while school is out of session.

With the upgrades, the bridge deck should last at least 60 years before the next major repair, Rosane said. 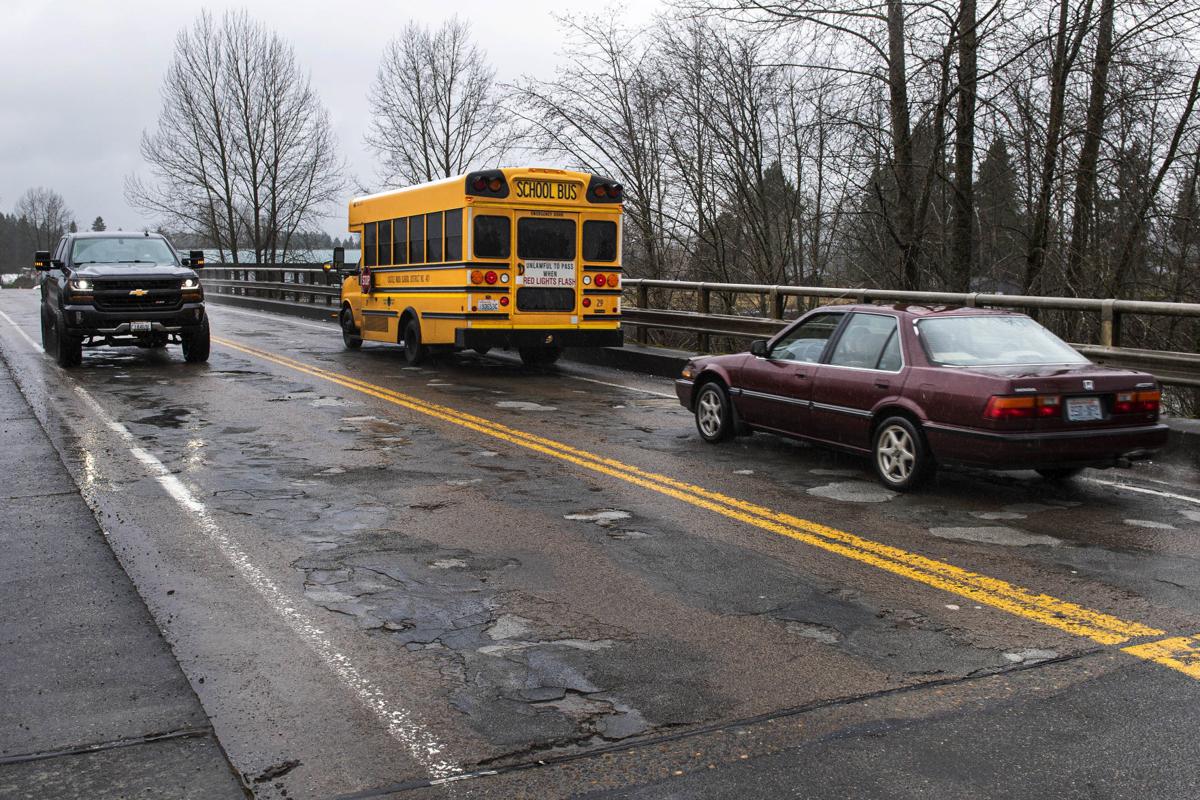 Vehicles drive on the patch-worked PH 10 Bridge over the Cowlitz River in Castle Rock Wednesday afternoon. 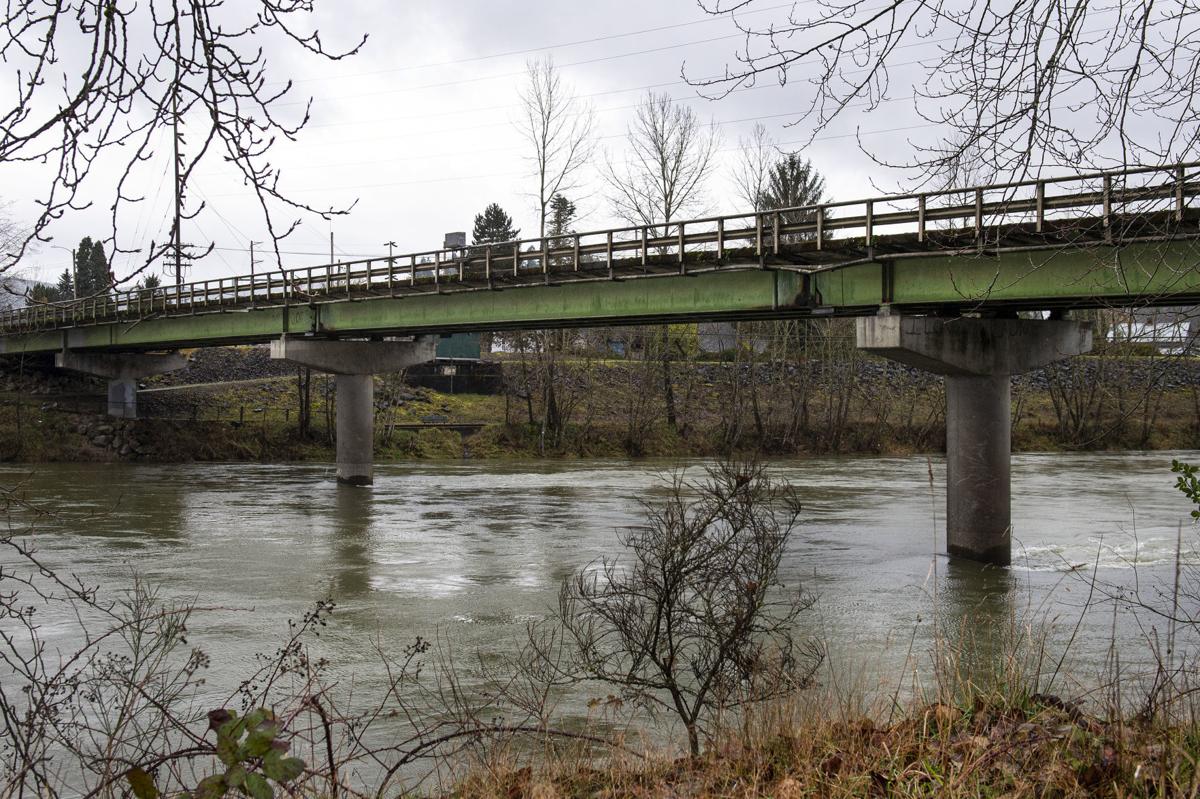 The PH 10 Bridge over the Cowlitz River in Castle Rock will be re-decked in 2021 by the Washington State Department of Transportation.