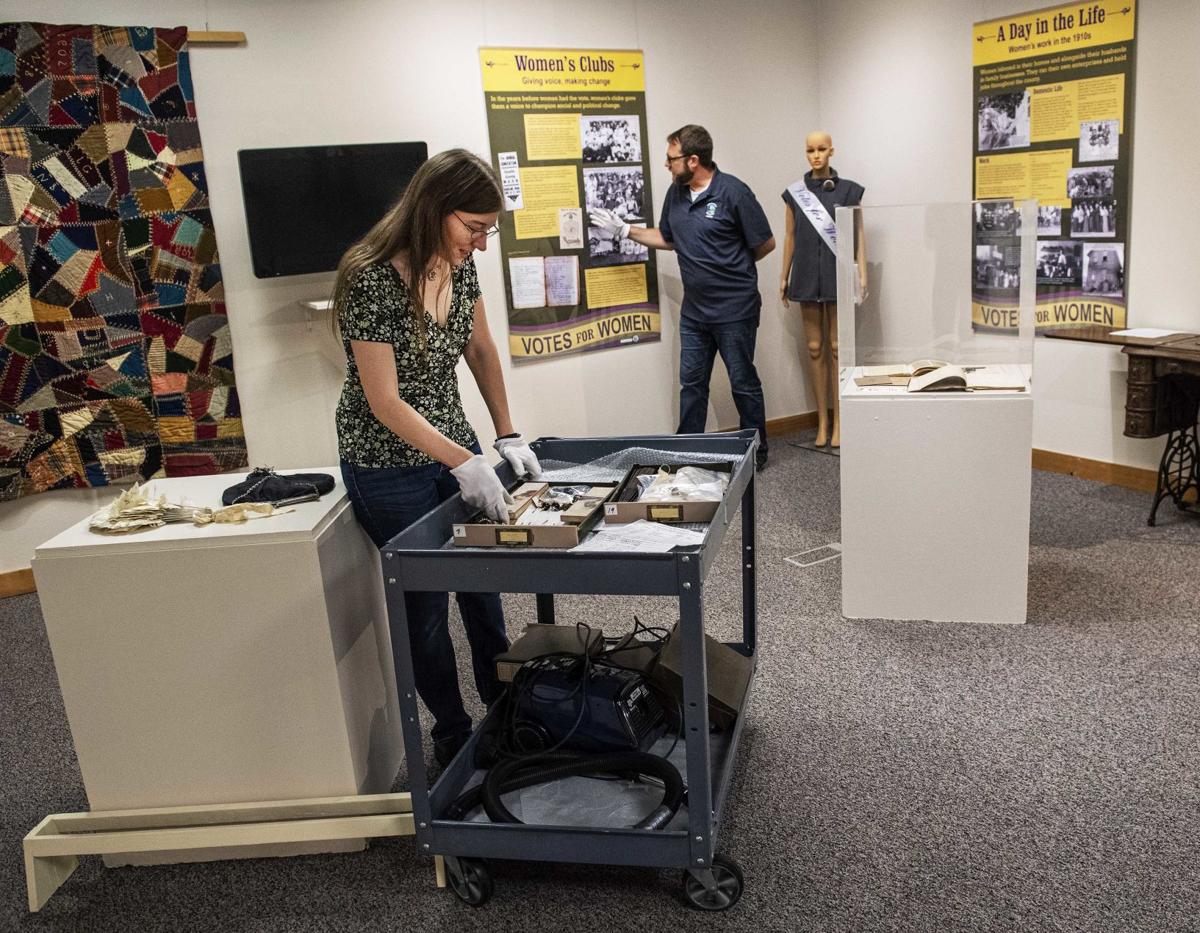 Education and program coordinator Danielle Robbins, left, and museum director Joseph Govednik set up the Cowlitz County suffragettes exhibit on Thursday at the Cowlitz County Historical Museum. The exhibit commemorates the upcoming 100th anniversary of the 19th amendment, which gave women the right to vote. 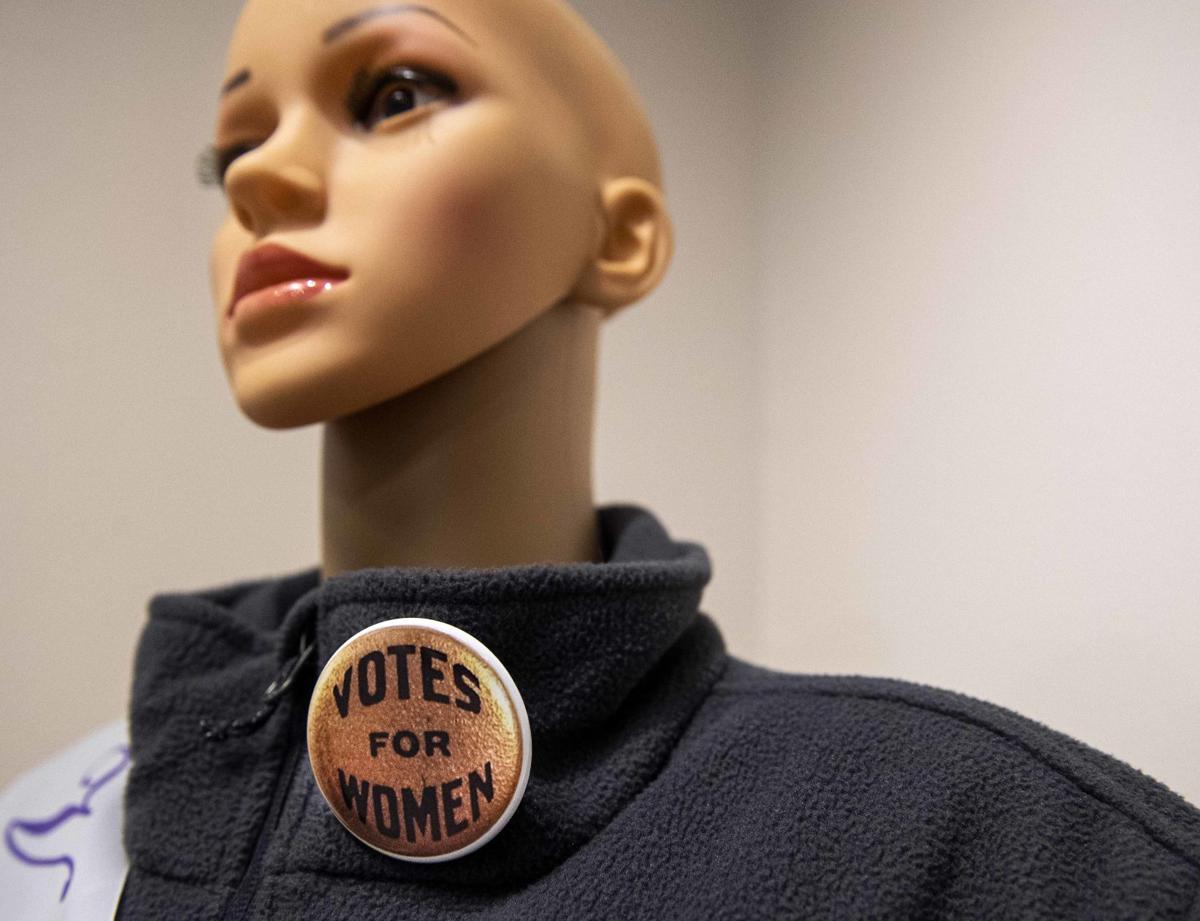 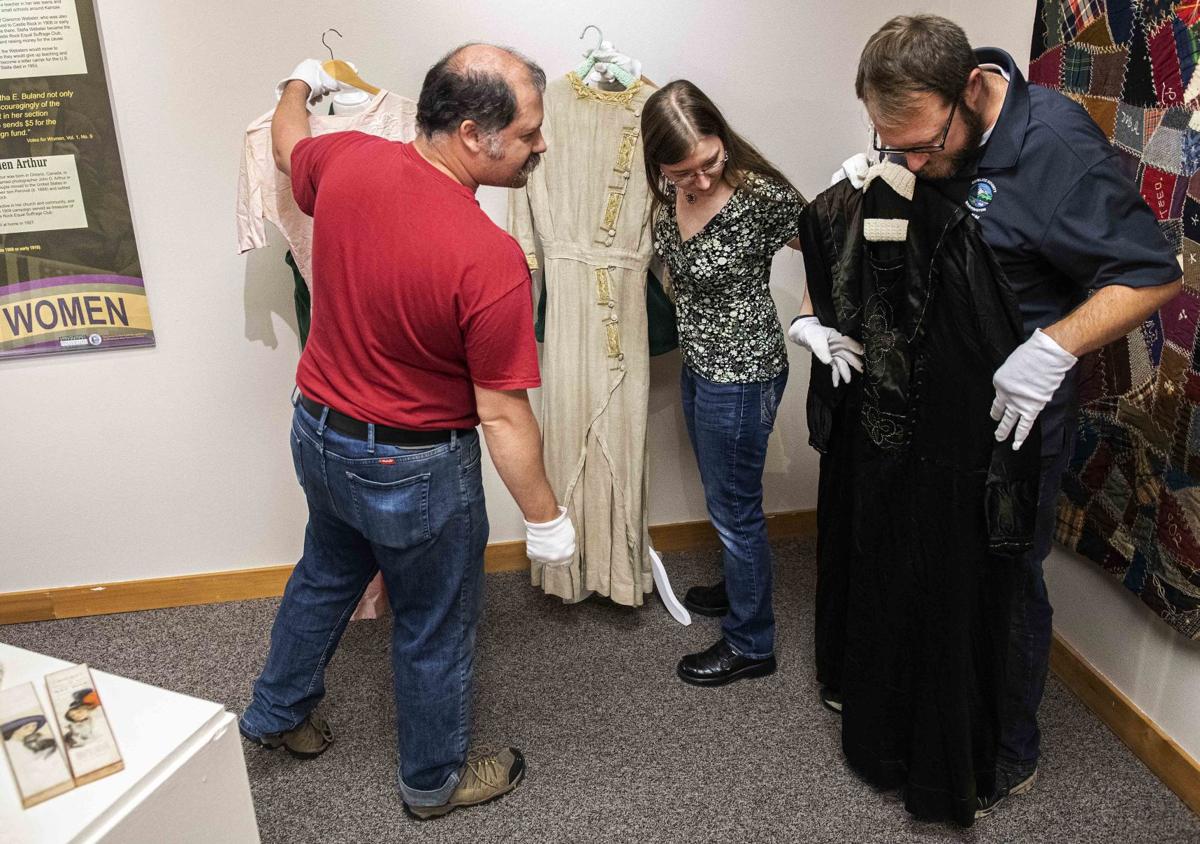 Cowlitz County Historical Museum employees inspect the intricate beading of an early 20th century women's dress that will be on display in the Cowlitz County suffragettes exhibit.

Antoinette Baker Huntington, in 1878, was elected the Cowlitz County Superintendent of Schools — the first woman in the county to be elected to public office.

In 1909, Marcella Woods Welch became the first president of the Kelso Equal Suffrage Club and opened the Cowlitz County Suffrage Convention, the first in a series of events around the state.

The stories of these Cowlitz County suffragettes and others will be on display at the Cowlitz County Historical Museum for the next six months to commemorate the centennial of the 19th Amendment to the U.S. Constitution guaranteeing women the right to vote.

“Women who played a role in shaping our county’s history are stories that need to be told and shared,” museum director Joseph Govednik said last week. “There’s so much that happened in our history that if we don’t dig it up and share it, people don’t know that it happened.”

The exhibit is open to the public beginning Friday but there will be an official opening at the museum’s First Thursday event from 7 to about 8 p.m. on Sept. 5.

Because the First Thursday events are scheduled far in advance, the Sept. 5 event won’t be related to suffragettes, Govednik said, but it’s an opportunity to open the exhibit in front of an audience. (The First Thursday event will feature Gerald “Whitey” Nelmark, a 1955 R.A. Long High School graduate and local authority on sports.)

The museum is free and open from 10 a.m. to 4 p.m. Tuesdays through Saturdays.

The suffrage movement display will be in the nook where there have been previous displays on World War I and most recently the Children’s Discovery Museum.

A $5,000 grant from the Washington State Historical Society paid for a curatorial consultant and costs associated with designing and printing banners.

The exhibit was curated from the museum’s more than 1 million archived images, Govednik said. The display will also include some physical artifacts as well as mannequins in clothing from the 1880s, 1910s and 1920s. There will also be reproductions of suffragette flags on display and buttons in the gift shop.

While the 19th Amendment was officially ratified in 1920, the fight for suffrage in Washington began much earlier.

In 1883, women won the right to vote in Washington by Territorial legislative action. But they lost the vote again four years later when the Territorial Supreme Court invalidated it.

“That’s an illustration of just because you get rights, doesn’t always mean you get to keep them,” Govednik said. “You have to be vigilant all the time.”

In 1910, the Legislature passed an amendment to the State Constitution giving most women the right to vote. And a decade later, Washington was the 35th of 36 states needed to ratify the 19th Amendment allowing women to vote nationally.

Washington was ahead of the curve, in part, because of the “pioneer spirit in Western states,” Govednik said.

“When you’re homesteading and coming over lands on a prairie schooner, everybody has to help out with everything,” he said. “There were probably some elements of greater equality because women had to chop firewood and build cabins and things like that. Every person had to be responsible.”

The exhibit focuses on female leadership, but Govednik said it’s not only for women.

“Our democracy is based on people voting and, therefore, full representation of all people is important to have a truer representative democracy,” he said. “Until 1920 in our country, about half of the people couldn’t vote or didn’t have the right to vote. It was a privilege in the country at the time, not a right. In 1920, it became a right.”

The exhibit will be on display until early 2020, when the museum will transition the space into an exhibit on the 40th anniversary of the Mount St. Helens eruption.

Govednik said he hopes to loan the interpretive panels on suffrage out to other organizations and public spaces so they can continue to be on display through 2020.

“What I hope people take away from this exhibit is a deeper foundation of activism in our community from a century ago,” he said. “And (I hope) to bring familiarity to the women who helped shape Cowlitz County history.”

Education and program coordinator Danielle Robbins, left, and museum director Joseph Govednik set up the Cowlitz County suffragettes exhibit on Thursday at the Cowlitz County Historical Museum. The exhibit commemorates the upcoming 100th anniversary of the 19th amendment, which gave women the right to vote.

Cowlitz County Historical Museum employees inspect the intricate beading of an early 20th century women's dress that will be on display in the Cowlitz County suffragettes exhibit.