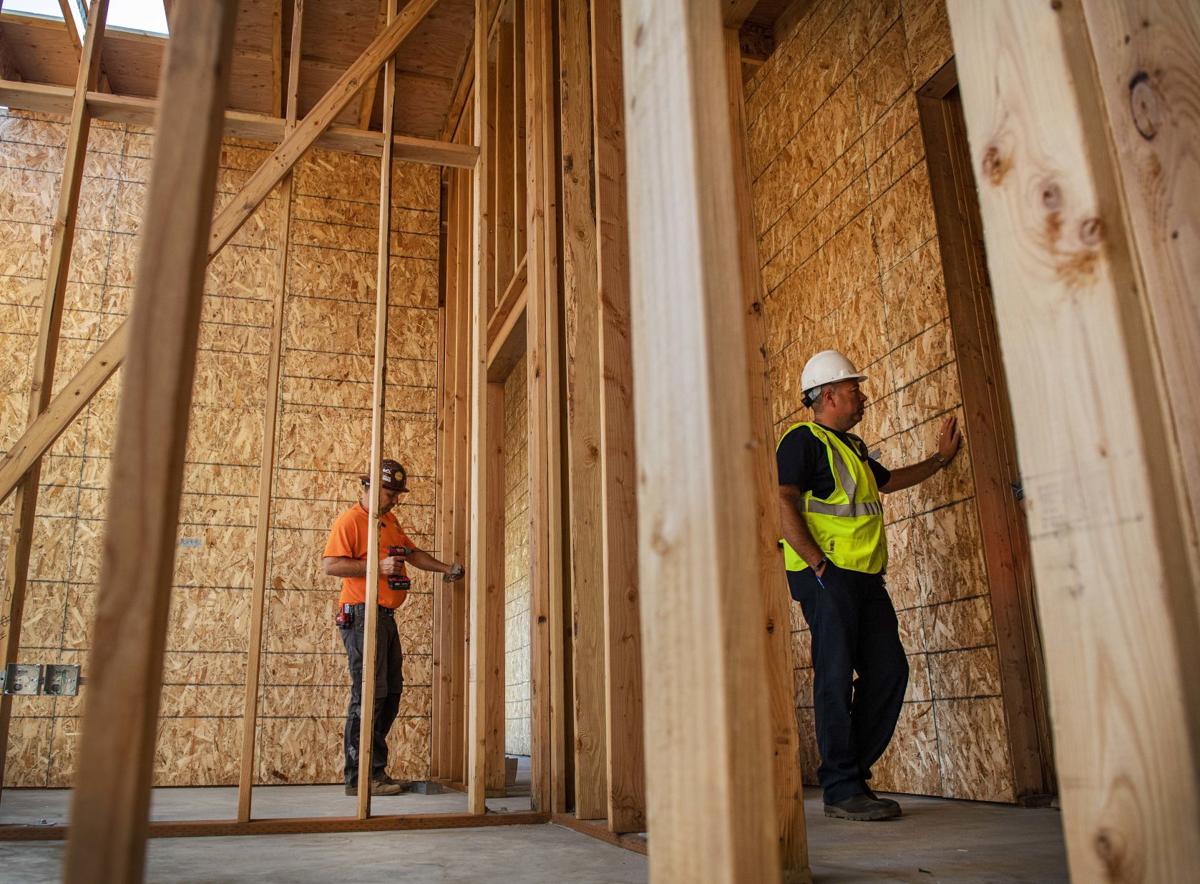 Construction crews work on framing of the new Cowlitz 2 Lexington station while Lieutenant Jeremy Huff, right, walks through the project on Tuesday. 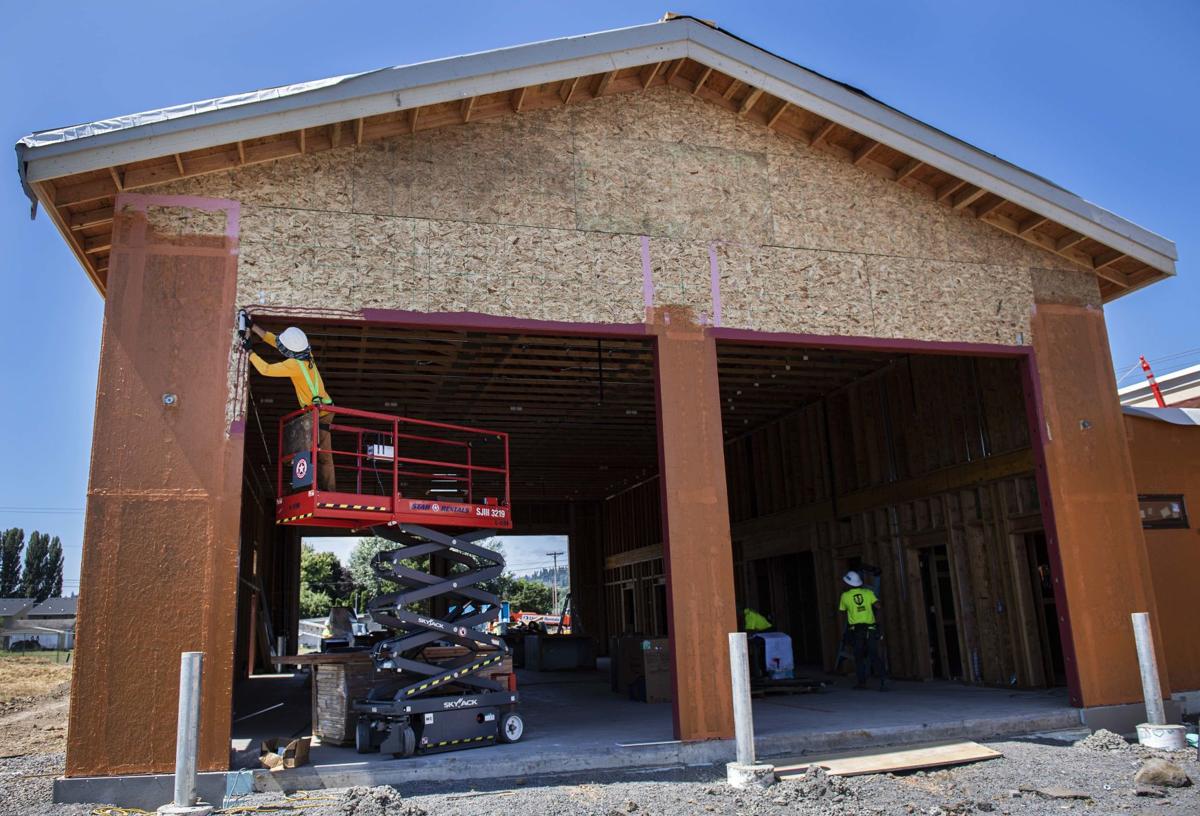 A construction worker preps an exterior wall for weatherproof coating on Tuesday at the new Cowlitz 2 Baker's Corner fire station.

Frames and piping are going up at a pair of bond-funded fire stations that Cowlitz 2 Fire & Rescue plans to have operational by early 2020, and the agency is hoping to bring back some features earlier considered too costly.

The new stations at Baker’s Corner in West Longview and along West Side Highway in Lexington are part of a voter-approved $11 million improvement project, which includes purchase of a new fire engine and equipment for the stations.

That means the agency will be able to staff full-time and volunteer firefighters regularly at the stations, which Huff said will lead to quicker response times and better-prepared personnel.

The difference is “huge,” he said.

“This is our home for 24 hours a day,” Huff said. “You’re away from your home and family.”

The Baker’s Corner station, located at 5699 Ocean Beach Highway, is about 60 percent finished, Huff said. He said it is expected to be completed in January. That station has been fully framed and contractors are installing windows, HVAC, electrical, plumbing and other engineering.

The project’s lowest bid from Tapani Inc. came in $1.3 million less than an engineer’s estimate of $4.5 million.

Firefighters say they’ve outgrown the current Baker’s Corner station, built in 1965. It’s also vulnerable to sinking in a major earthquake, so the new station is being built on steel pilings driven 90 feet into the earth.

Meanwhile, the Lexington station at 1796 West Side Highway is about 30 percent complete and is expected to be finished by February, Huff said. The building is in the framing stage and is being constructed by Tumwater-based contractor Berschauer Group, Inc.

Berschauer’s bid came in about $1.3 million less than the engineer’s estimate of $4 million.

The Lexington station is the busier of the two stations because it serves a more populated area and responds to incidents on Interstate 5. So the new station will have six bays, or room for six firefighting apparatus such as trucks or engines. Huff said the agency’s future ladder truck will be kept in Lexington.

The old station, built in 1978, has been crumbling for years.

The new Baker’s Corner station will be staffed 24 hours a day, Huff said, while Lexington will likely be staffed for 12 hours a day during the most active call time.

Because the Baker’s Corner station is more isolated, it will need to be staffed for more hours of the day than Lexington, which is closer to other staffed stations, Huff said.

Cowlitz 2 covers 150 square miles and protects 34,000 people in Kelso and in rural, unincorporated areas around the Kelso-Longview area, including Lexington. Voters in 2016 approved the $11 million bond to replace the aging Baker’s Corner and Lexington stations. The agency has additional stations in Kelso, Columbia Heights and Rose Valley.

The agency warned in 2017 that rising construction costs could drive the project past the bond revenues. So the agency saved half a million dollars by cutting Baker’s Corner down from six to four equipment bays. It also pinched pennies by cutting other planned features like electric gates and fencing.

But with the combined bids for both stations coming in about $2.5 million lower than expected, Huff said the agency will likely be able to build some of those features back in.

Once the stations are “substantially complete,” Huff said, the old buildings will be demolished. The new stations will be considered fully finished about two months after the demolitions.

Huff was less than nostalgic about the thought of the old stations coming down, especially Lexington.

“Can’t wait to see it go down in glory.”

'He would be there in a heartbeat': Family, friends mourn Robert Chick

Joann's Fabric and Crafts is giving away materials for people to make face masks to protect against COVID-19, and demand at the Longview area …

With April rent due this week, a statewide temporary stay on evictions has local landlords and property managers worried they never will colle…

Confirmed Cowlitz COVID-19 cases up by 3 over weekend; total at 21

Here's what we said about COVID-19 this week

“I understand some of the people who don’t want to come out and potentially get sick, but for me, this is my job. It’s my job to make sure the…

Construction crews work on framing of the new Cowlitz 2 Lexington station while Lieutenant Jeremy Huff, right, walks through the project on Tuesday.

A construction worker preps an exterior wall for weatherproof coating on Tuesday at the new Cowlitz 2 Baker's Corner fire station.