Editor’s note: This is the sixth story in our ongoing series marking the 40th anniversary of the eruption of Mount St. Helens on May 18, 1980. Stories appear in a collection on TDN.com as they appear in print and online.

Charlie Crisafulli has become the face of ecological study of Mount St. Helens over the course of his 40-year career researching how life is returning to the volcano.

Now, with plans to retire later this summer, Crisafulli is eager to pass on his knowledge to a new generation of researchers he says are enthusiastic and more diverse than ever before.

Lean and nimble for his 62 years, Crisafulli kept pace with his 19-year-old intern across the pumice plain on a blustery but boiling late August day last summer. Crisafulli was just a tad older than her when he first visited Mount St. Helens shortly before the May 18, 1980 eruption.

Since then, Crisafulli has published numerous studies, expanded the U.S. Forest Service’s ecology program at the Mount St. Helens National Volcanic Monument and been a consultant for volcanoes in Indonesia, Iceland, Chile and Hawaii. In 2016, he received the Outstanding Scientist award from the Northwest Scientific Association.

And as Crisafulli’s resume grew, so too did the value of research at the volcano across all scientific fields, creating a “priceless” 40-year record.

His long career all began with a seasonal research job at Mount St. Helens the summer of the eruption. He was 22.

“I never would have imagined that first summer would turn into a 40-year gig,” he said.

He was “the baby” among the first cohort of scientists, who were mostly between the ages of 35 and 50.

He recalled helicoptering over the “muzzle” of the steaming volcano days after the eruption. In the early days, he couldn’t stray more than 10 minutes from the helicopter in case the volcano started erupting again while he was working near it. A few times, even, Crisafulli had to run off the pumice plain during the additional explosive eruptions throughout the summer and fall of 1980.

The world was gray and rotting, he said. In the first days, it smelled like decaying animal carcasses as organic matter smoldered under volcanic deposits: “It was a fetid ... rotten-eggs smell.”

But the research was “exhilarating.” And each new discovery during those days sent “you to the moon,” he said.

The May 18, 1980 eruption decimated the Mount St. Helens landscape and the complex ecosystems that inhabited it. Nearly 40 years later now, wi…

“Now the discovery is not as often, or I’m used to them. But there’s nothing quite like studying one system for so long and getting to know the cast of characters,” he said.

Crisafulli spent a decade as a research associate at the Utah State University Department of Ecology running a summer program at Mount St. Helens.

In 1989, the Forest Service hired him as the monument’s ecologist, which is the role he serves in today. He still conducts research, but his broader job is to be a liaison between the Forest Service and the ecology community. Every five years he organizes an event to gather researchers to network and share their findings.

“I keep my fingers on the ecological pulse of the place and community,” he said.

“If you study many organisms, you have a better barometer of the ecological response,” he said. “A more holistic approach leads to a better understanding of how the ecosystem rebounds.”

To demonstrate a point, Crisafulli would crawl under a green alder brush or dig up double fists full of soil. He spoke at length on a mind-numbing array of topics ranging from the Pacific jumping mouse to elk.

When he reached the wildlife camera — a square metal box with a small lens in the center — Crisafulli pulled out glass bottles of a scenting lotion called “Gusto” consisting of ground up weasel and skunk musk glands. The scent is “irresistible” to almost anything, Crisafulli said. Bears especially love the mixture and will rub every part of their body in it.

To humans, however, it is less pleasant.

“You never get used to the smell. It’s horrid, acrid. It burns your nose; overwhelmingly strong and not pleasant,” Crisafulli said.

He applied the Gusto with a stick to a tree across from the camera so any wildlife that stopped by would be caught on video. He’s been monitoring life like this for years.

“The fundamental question is if there is a big disturbance and life is wiped clean, how does it reassert itself?” he said.

He says the “last great epiphany” in ecological research at the mountain is that few species were lost within the landscape. Everything within the blast zone died, but their species weren’t completely wiped out.

“Where all life is removed, it comes back slowly and unpredictably,” he said.

The species that were here before the eruption and those that are here now overlapped, but they have rebounded in differing ways, he said. For instance, amphibians rapidly returned for a while. Then snakes began to eat them, and then the snakes boomed.

+40 PHOTOS: A day in the field with Mount St. Helens Ecologist Charlie Crisafulli

As Crisafulli approached a hidden wildlife camera location on the saddle between Bean and Smith creeks, he suddenly stopped and put his hands on his hips.

The camera was gone. Where it had been attached to the base of a tree there remained only scrapes left where someone likely used a hatchet to pry it free. Three months of footage and an entire year of tracking large mammals: gone. Exasperated, Crisafulli said it was the first time in four decades anyone had stolen his gear.

“It makes you lose faith in humanity,” he said. “I’ve left my wallet in the truck with the windows down. You might say it’s stupid but I’ve never had anything taken.”

However, Crisafulli seems to have a lot of faith in the next generation of researchers, who he says are highly-trained, enthusiastic and overwhelmingly female.

“Were there periods of waning interest (over the years)? Absolutely. But the most exciting aspect is we are reaching perhaps our greatest renaissance (of interest in research) since the eruption,” he said.

As one of the last members of the first cohort generation of researchers, Crisafulli said the field is losing a lot of expertise to retirements. The next generation, however, is jumping in with new questions, research systems and methods.

The important thing now is to pass the research on to a younger generation, he said.

Crisafulli doesn’t plan to completely cut ties with the mountain when he retires. He says he will continue setting up his Mount St. Helens base camp with researchers over the summer. But he also wants to work in his extensive garden, enjoy his wine-making efforts, spend time with family and read something other than research publications.

“How can I do these things if I spend all my time at Mount St. Helens? I had a love affair with Helen for 40 years. I need to shoo her out, to some extent, to let other things in. And it’s time for me to move out and let somebody else come in.”

The May 18, 1980 eruption decimated the Mount St. Helens landscape and the complex ecosystems that inhabited it. Nearly 40 years later now, wildlife from crawly critters to mighty mammals continue returning to the area. Visit the online version of this story for a Mount St. Helens wildlife video and a photo gallery including research images by Charlie Crisafulli. 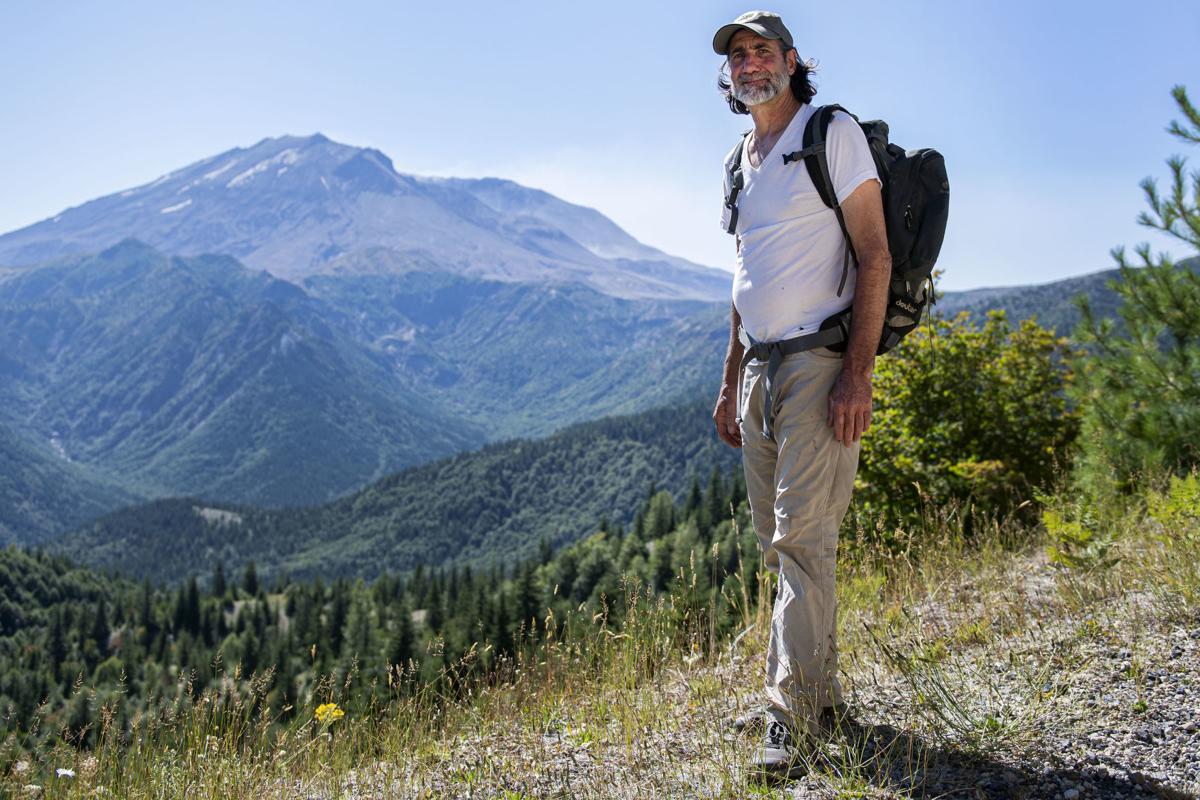 Ecologist Charlie Crisafulli pauses for a photo in front of Mount St. Helens while hiking to a wildlife camera location during an August 2019 research trip. 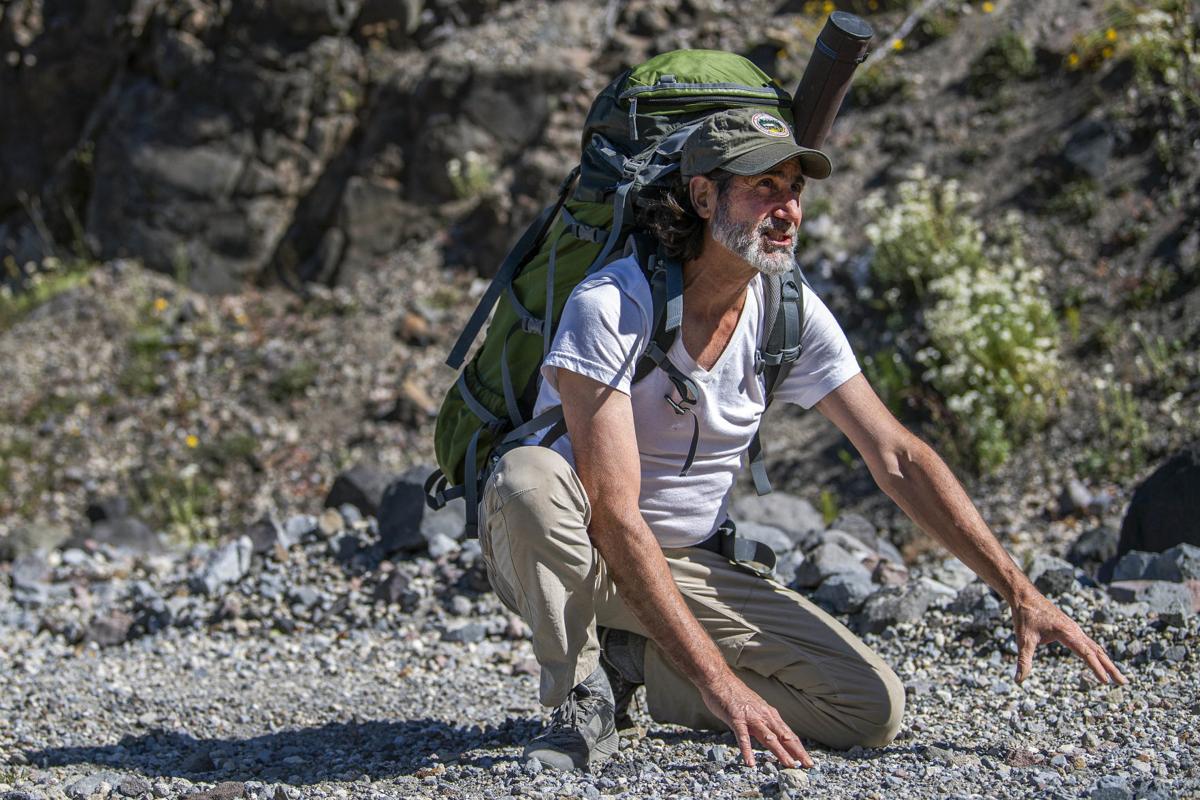 Ecologist Charlie Crisafulli kneels on the ground when describing the changing landscape of Mount St. Helens during an August 2019 research trip. 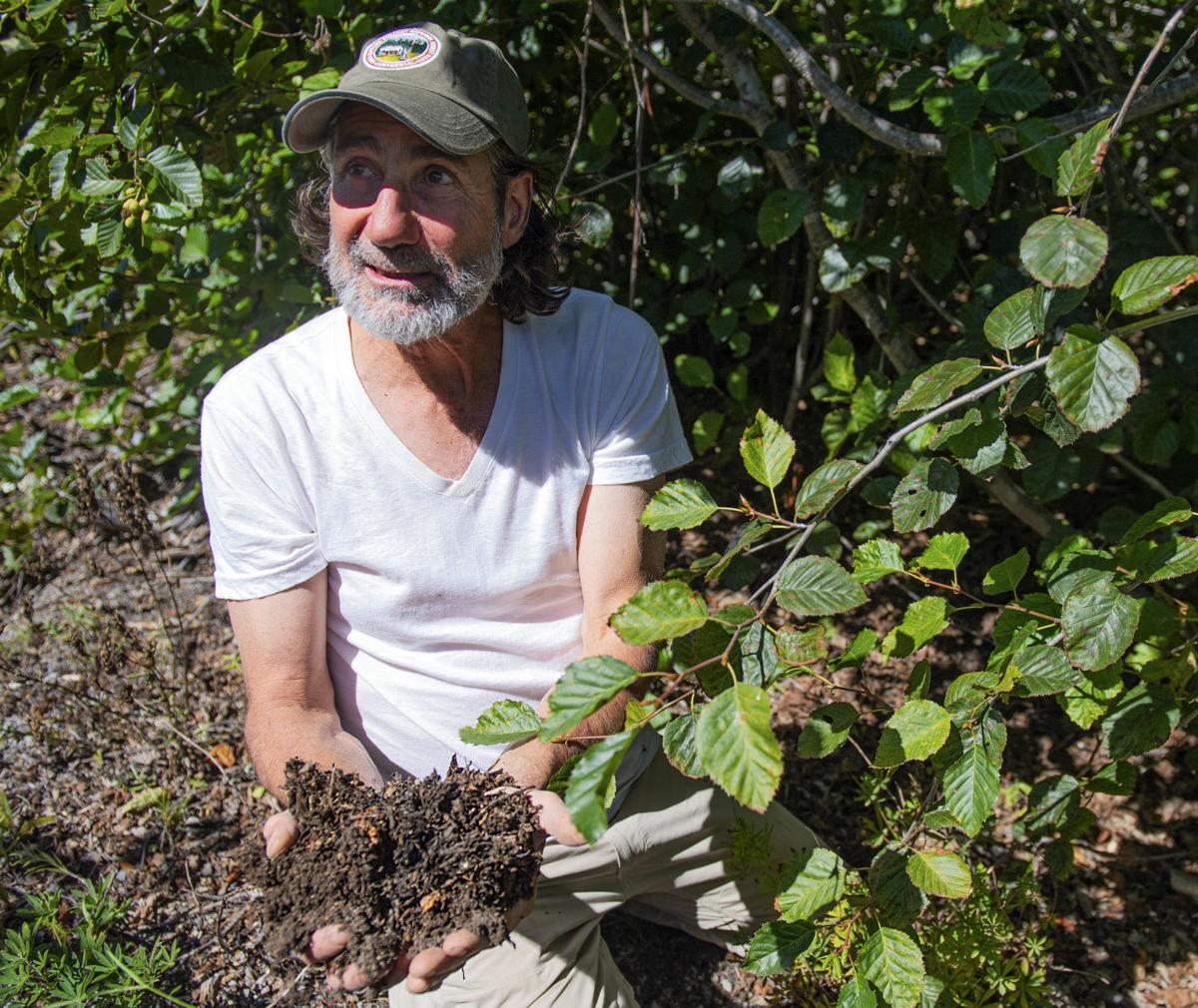 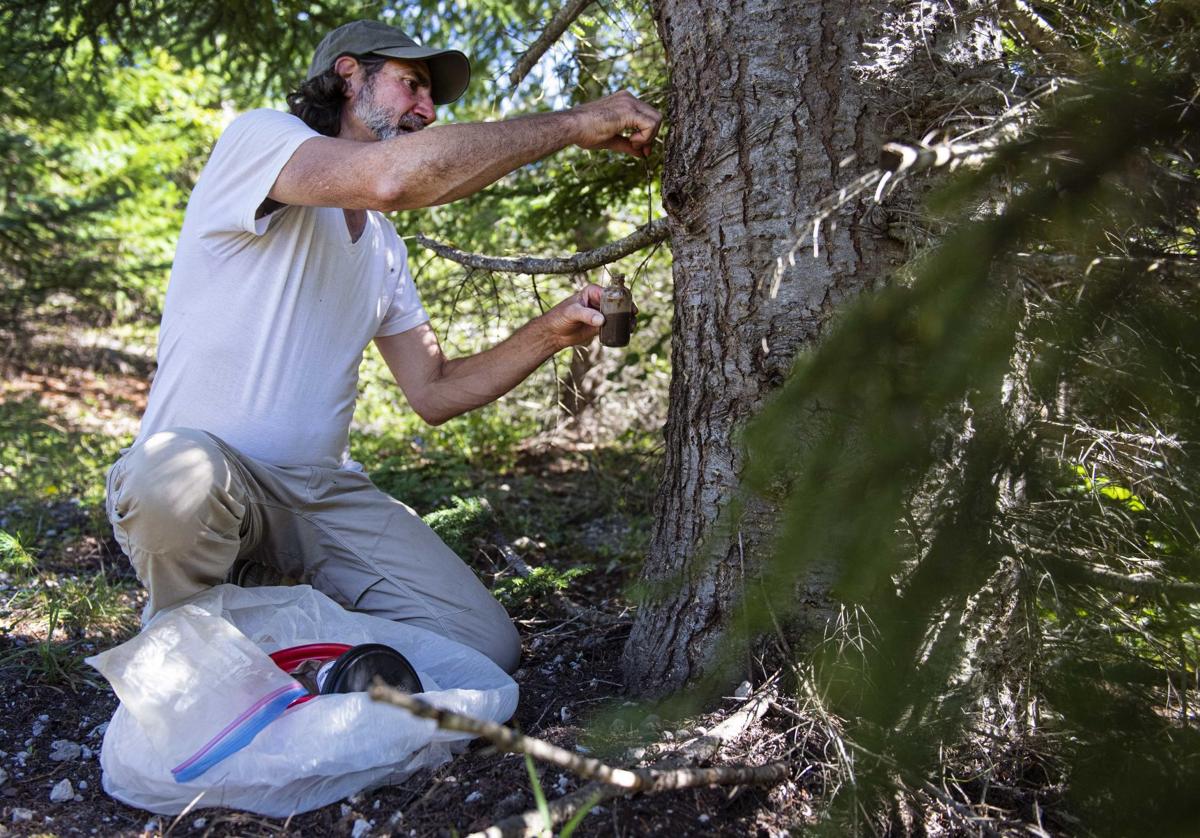 Ecologist Charlie Crisafulli spreads gusto with a stick on a tree near a wildlife camera during a research trip near Mount St. Helens in August 2019. 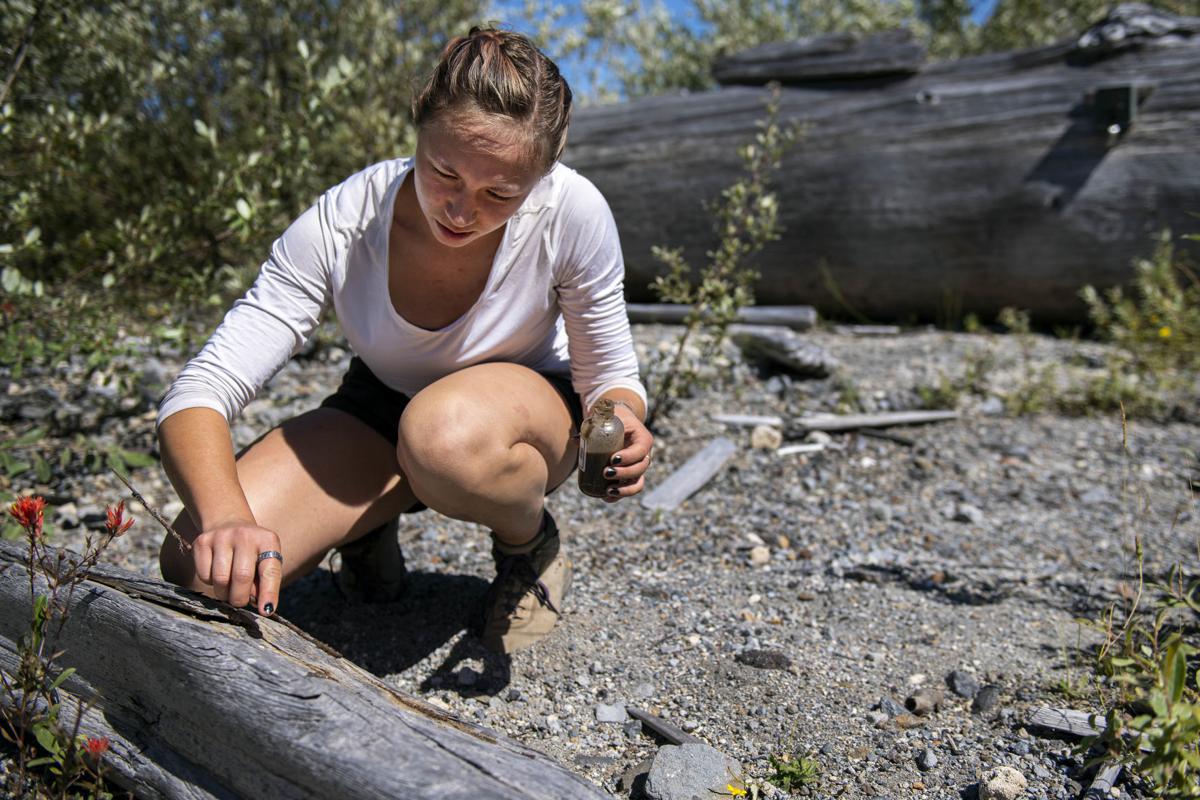 Sierra Smith, 19-year-old intern with Mount St. Helens Ecologist Charlie Crisafulli, spreads gusto on a log in front of a wildlife camera near Spirit Lake during an August 2019 research trip.