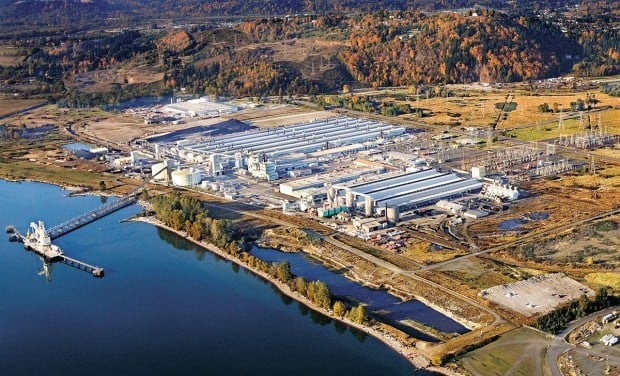 Most of the buildings on the old Reynolds Metals Co. aluminum-making site would be demolished and replaced if Millennium Bulk Terminals gets to build a 44 million ton coal export plant along the Columbia River. It also would build a new export dock, down-river and to the left of the existing dock in this picture. 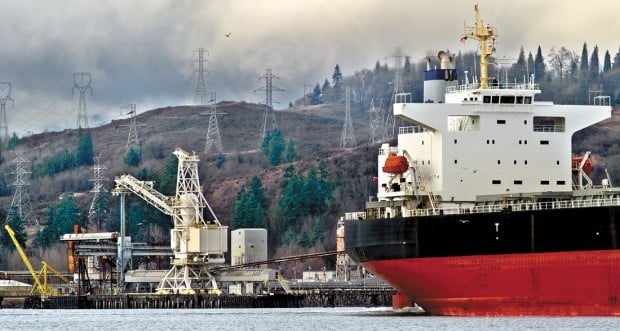 A ship passes the site of the proposed Millennium Bulk Terminals coal export terminal Feb. 15, 2011, as seen from the Oregon side of the Columbia River.

Millennium Bulk Terminals is proposing to build a $600 million terminal west of Longview to export 44 million tons of coal annually, an amount that would make it one of the largest such facilities in North America.

The terminal would be a major shot in the arm for the area’s construction industry and its tax and employment base, and Millennium has promised to take steps to control coal dust and avoid traffic congestion.

But the proposal sparked an immediate attack from environmentalists, who raised the spectre of coal dust drifting over the community and traffic snarls caused by the mile-long trains that would deliver coal to the terminal daily.

“Longview should trust this company as far as you can throw 44 million tons of coal,” said Brett vandenHeuvel, executive director of Portland-based Columbia Riverkeeper, a leading opposition group.

The company submitted an application for the long-anticipated project to the Cowlitz County planning department Thursday.

When fully built, the terminal would employ 135 full-time workers and create 165 indirect jobs, for a total of 300, according to Millennium. It would require razing most of the 1940s-era buildings at the 416-acre former Reynolds Metals Co. aluminum site, which employed about 950 workers at the time it was shuttered a decade ago.

Company officials say they expect to create 2,650 direct and indirect construction jobs over an 18-to-24-month period — expressing hopes they would be mostly local — and are negotiating with the International Longshore and Warehouse Union to work at the dock. Over a 30-year period, the terminal would generate $235 million in state and local tax revenue, according to the company’s economic analysis.

Eight, mile-long trains a day would deliver coal to Longview. Including round trips, a total of 16 train a day would stop traffic at Third Avenue, Oregon Way, California Way and Industrial Way.

Company officials previously have acknowledged that the existing rail corridor is completely inadequate to cope with a coal terminal of the size proposed Thursday. They say they are working with Burlington Northern Santa Fe to expand rail lines but haven’t completed a plan.

Although it was widely expected that Millennium would submit the application, the sheer scope of the project dwarfs its earlier plans for a 5.7 million ton terminal, which the company withdrew a year ago.

Millennium expects to complete an environmental study of the terminal proposal in 18 to 24 months. It will include a transportation analysis.

The project would be built in two phases: First, the company would clear enough space for two giant, 30-to-40-foot high coal stockpiles, large enough to export 25 million tons of coal a year, requiring five daily train deliveries. Second, Millennium plans to expand the dock and add two more coal piles to reach full capacity of 44 million tons. The project would take five years to develop fully, according to the company.

The company would also install dust-suppression spray towers and dust monitors in the area to limit the amount of coal that floats in the air, Millennium CEO Ken Miller said in an interview with The Daily News.

“I have no qualms about putting dust monitors out here to ensure that we meet (state and federal) standards,” Miller said.

The coal would be loaded at a new dock large enough to accommodate two ships at the same time. The existing dock, which Millennium uses to import alumina for an Alcoa smelter in Wenatchee, would be used to handle all bulk cargo except coal.

The coal would be shipped from Longview to China, Korea and other Asian countries where a booming population is creating big demand for more energy.

“The whole (region) is growing, and all the systems have to grow to accommodate it,” Miller said.

Millennium must first obtain a shoreline building permit from Cowlitz County commissioners. The company also must obtain permits from the U.S. Army Corps of Engineers for the new dock and clean air permits from state or regional agencies.

In the fall of 2010, county commissioners approved Millennium’s permit to export 5.7 million tons from the existing dock, and area conservation groups immediately appealed to a state review board. But in February 2011, internal emails from Ambre officials revealed the company was exploring exporting as much as 60 million tons of coal. Following a public outcry, the company withdrew the permit application but vowed to resubmit a more complete application at a later date.

Millennium said it is prepared to face strong opposition this time around.

“We would expect questions to be raised,” Miller said.

The Millennium terminal would be the largest of three coal export docks proposed for the lower Columbia River. Both the other terminals are proposed for construction at Port Westward near Clatskanie. Texas-based Kinder Morgan wants to build a $200 million terminal to export 15 million tons of coal annually, and another Ambre Energy subsidiary, Pacific Transloading, wants to build an 8 million-ton terminal.

Millennium’s terminal would be nearly the same size as the proposed Gateway Pacific Terminal at Cherry Point near Bellingham. Developer SSA Marine hopes to export 48 million tons of coal from there. The West Coast’s largest current coal terminal, Westshore at Roberts Bank in British Columbia, has an annual export capacity of 29 million tons.

Millennium bought the buildings and equipment on the Reynolds site for $10.9 million in January 2011. The land is owned by Alcoa Corp., which is on the hook to clean up soil and groundwater contamination from decades of contamination by Reynolds.

For a community so desperate for jobs, but also burdened with high levels of industrial pollution already, the proposed Millennium Bulk Terminals coal export project poses many tough questions. Will it clog our air and streams with dust and our streets with freight trains? How would such a massive project affect the image our community? Will it be a steady employer? Or, as coal critics say, can we do better? Over the coming weeks and months, we will explore these and other questions in an occasional series we're calling "Conflicted over Coal."

Stacey Abrams on voting rights, her next move

Stacey Abrams on voting rights, her next move

Opponents of proposed coal terminals in Longview and Bellingham say they will deliver 40,000 protest signatures to state Commissioner of Publi…

BELLINGHAM -- About 800 people packed the Bellingham High School theater Tuesday, March 20, to learn how they can make their voices heard duri…

Most of the buildings on the old Reynolds Metals Co. aluminum-making site would be demolished and replaced if Millennium Bulk Terminals gets to build a 44 million ton coal export plant along the Columbia River. It also would build a new export dock, down-river and to the left of the existing dock in this picture.

A ship passes the site of the proposed Millennium Bulk Terminals coal export terminal Feb. 15, 2011, as seen from the Oregon side of the Columbia River.