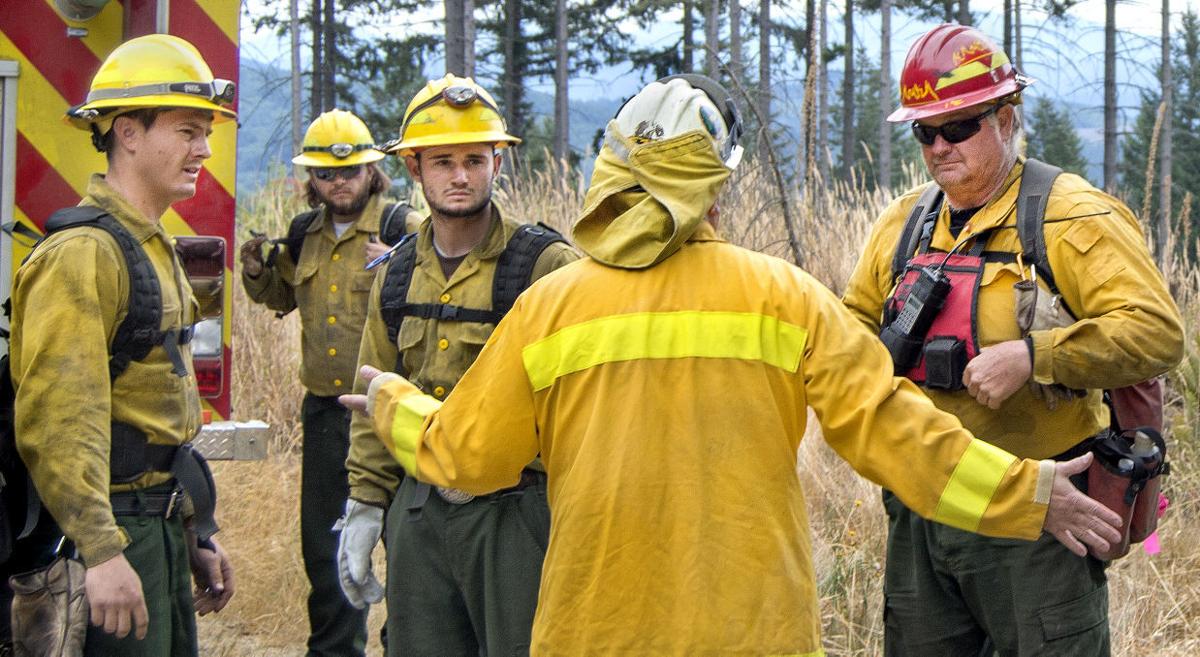 Tim Dawdy, a battalion chief with Clark County Fire & Rescue, chats with a firefighting crew from Utah mobilized as part of the massive effort to contain the Colvin Fire east of Woodland. 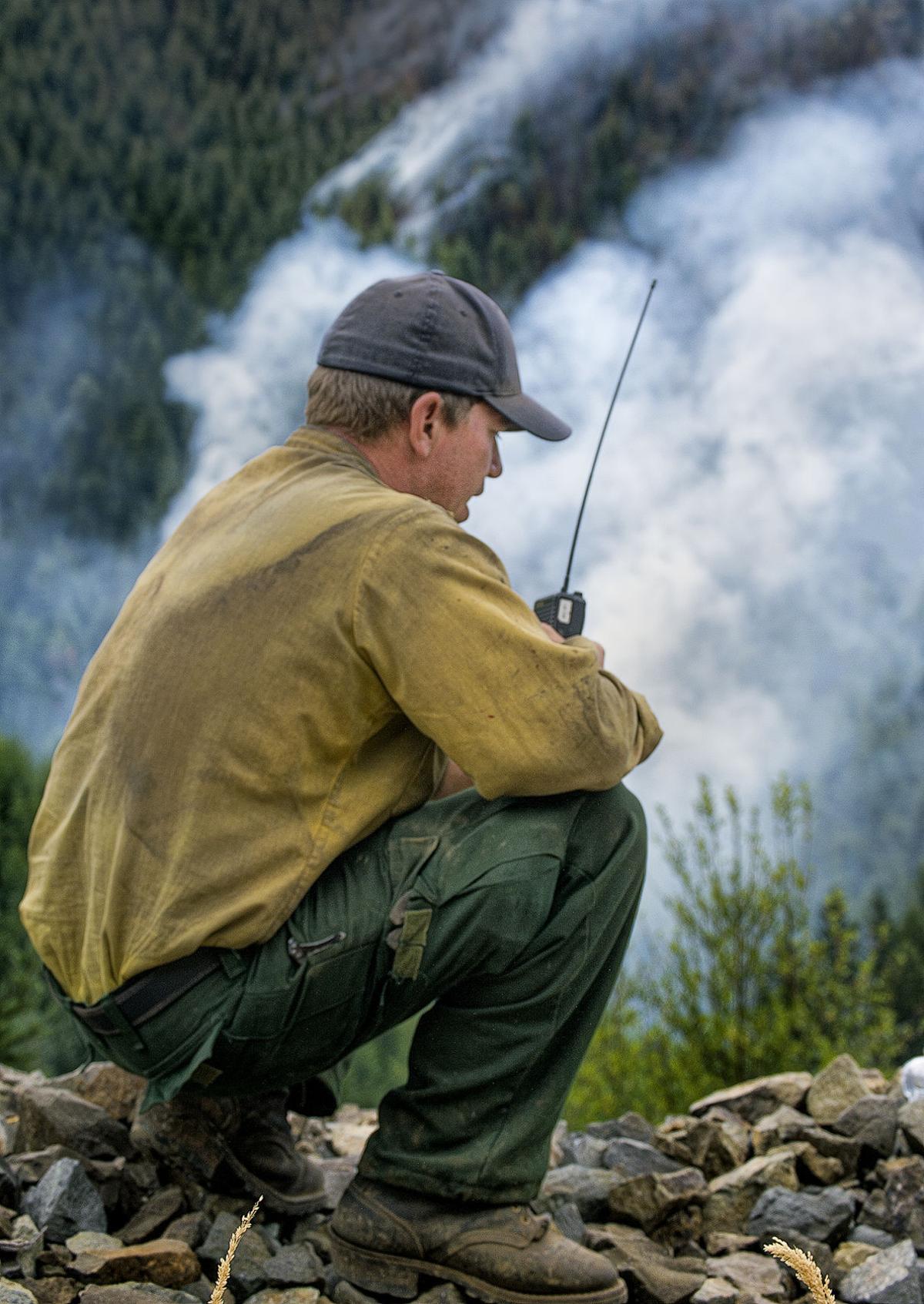 Department of Natural Resources firefighter Jason Hoerner radios area crews at a lookout above the Colvin Fire east of Woodland on Tuesday. 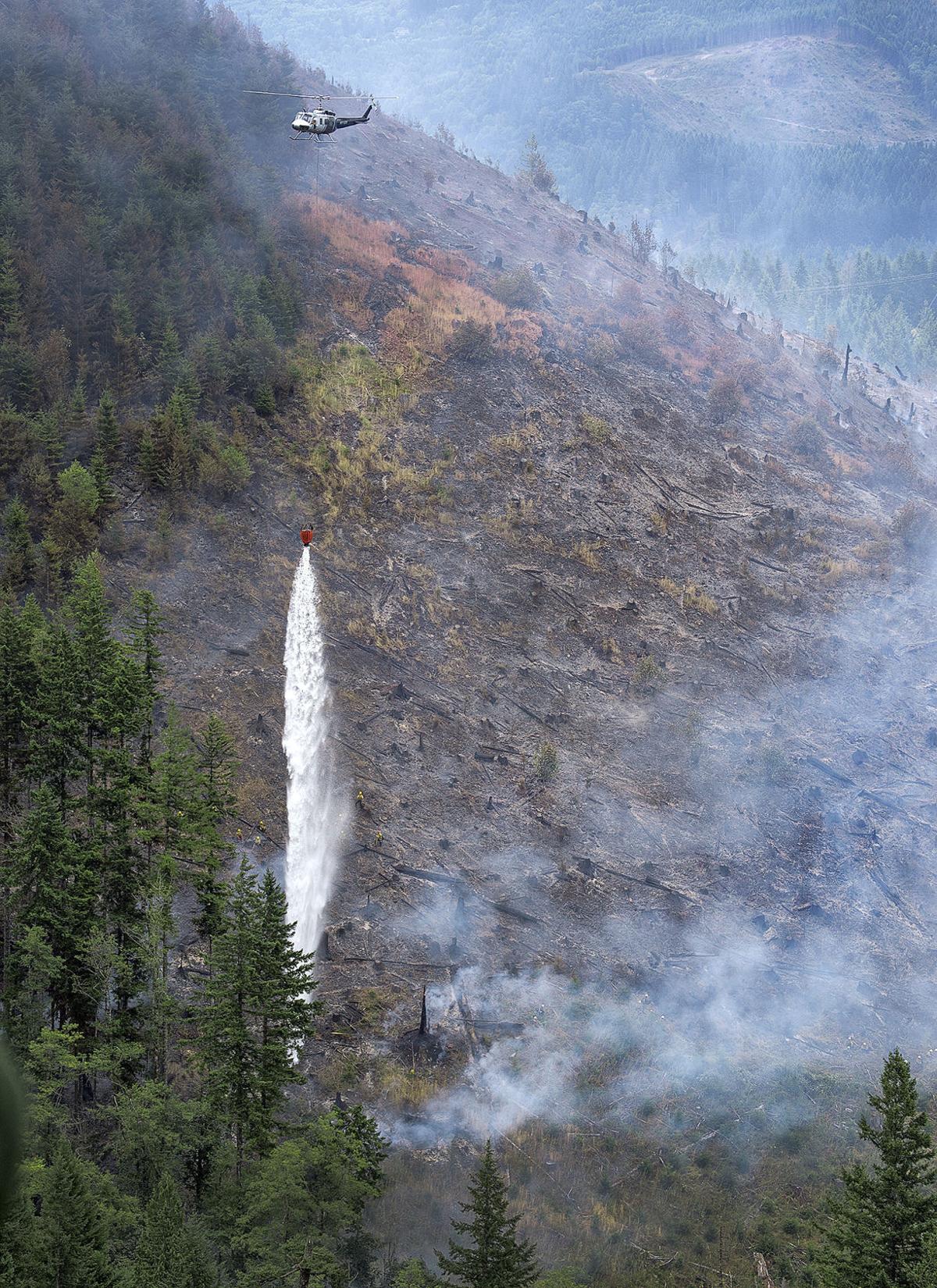 A helicopter drops 300 gallons of Lewis River water on smoldering timber near the edge of the Colvin Creek fire east of Woodland.

COLVIN CREEK — Under normal circumstances, the lingering scent of campfire on your clothes is worn with pride, a musty musk reminiscent of good times.

Unfortunately, this is a bonfire no one had planned that everybody is showing up to.

“We may have had fires that are bigger,” state Department of Natural Resources forester Matt Binder said Tuesday, “but this is very complex.”

East of Woodland and just north of the Lewis River, the Colvin Creek fire is burning about 110 acres of steep, state-managed forest.

It’s a half-mile from any homes or structures and likely will only move farther away, so the focus now is on containing what has burned since the fire started Sunday and mopping up from there. Still, officials are not promising to have the fire out by a specific day.

“The big threat has been mitigated,” said Department of Natural Resources spokesman Allen Lebovitz. “With public safety and private property taken care of, the number-one priority is making sure crews on the ground safe.”

Lebovitz, a habitat restoration specialist, was called into action as many DNR employees are when fire season hits. He acted as a tour guide Tuesday around the biggest fire burning in Southwest Washington so far this year.

Two helicopters carrying 300-gallon buckets of Lewis River water buzzed overhead, dumping on smoldering hot spots every five to seven minutes. Firetrucks with a multitude of county names you’d need an atlas to recognize appeared through the smoke along rough logging roads next to the more familiar Cowlitz 1 and Cowlitz 5.

One company from Utah was ready for action above where containment lines were being cut.

Engine Chief Grover Allred, from Nephi, Utah, said he and his initial-attack crew were on their 10th fire in Washington this summer, having traveled plenty between Kalama and Olympia already.

Due to the steep, Colvin Creek terrain, many of the containment lines — thin, trail-like paths scoured of brush and branches to stop the spread of fire — were being cut by hand through dense brush, logs and other vegetation.

“That’s not an easy thing to do west of the Cascades,” said Tim Dawdy, a battalion chief with Clark County Fire & Rescue. “These were once old-growth forests, remember.”

Tuesday’s weather was cool, slightly humid and overcast — a welcome break from the months of heat that have created matchstick forest conditions.

“The next two days are our best chance to get a good handle on the fire,” Dawdy said. “Instead of pulling back when the weather lets up, we push harder so we can move on to the next fire.”

Jason Hoerner has been fighting fires like these for 14 years, two of them as part of the Ahtanum crew from Yakima County.

“Welcome to the party,” the DNR firefighter said from a lookout across the valley from the visible smoke, watching helicopters drop water over the seemingly impossible terrain.

As the fire has become largely contained — though still at risk of jumping a ridge — the focus has turned to protecting the public’s forest asset, both for ecological and financial surety.

He and several other DNR crewmembers had recently come from the northeastern corner of the state and the 3,000-acre Sleepy Hollow fire near Wenatchee.

Odds are they might be headed back east soon.

There were 60 new fire starts in Northeast Washington overnight Monday, putting pressure on scarce resources already gathering from around the country.

“We’re in a marathon situation, pacing ourselves,” Lebovitz said. “This is still very early in the season.”

That gives an unwelcome chance for some record-setting fires in the state as the Northwest can’t seem to shake its unusual dry streak.

“We’re starting to wonder if this is part of a trend,” Lebovitz said.

Location: North of the Lewis River, east of Woodland

Investigators say fire near Woodland may be human-caused

The fire that burned about 110 acres east of Woodland this week may have been human-caused, officials say.

Tim Dawdy, a battalion chief with Clark County Fire & Rescue, chats with a firefighting crew from Utah mobilized as part of the massive effort to contain the Colvin Fire east of Woodland.

Department of Natural Resources firefighter Jason Hoerner radios area crews at a lookout above the Colvin Fire east of Woodland on Tuesday.

A helicopter drops 300 gallons of Lewis River water on smoldering timber near the edge of the Colvin Creek fire east of Woodland.