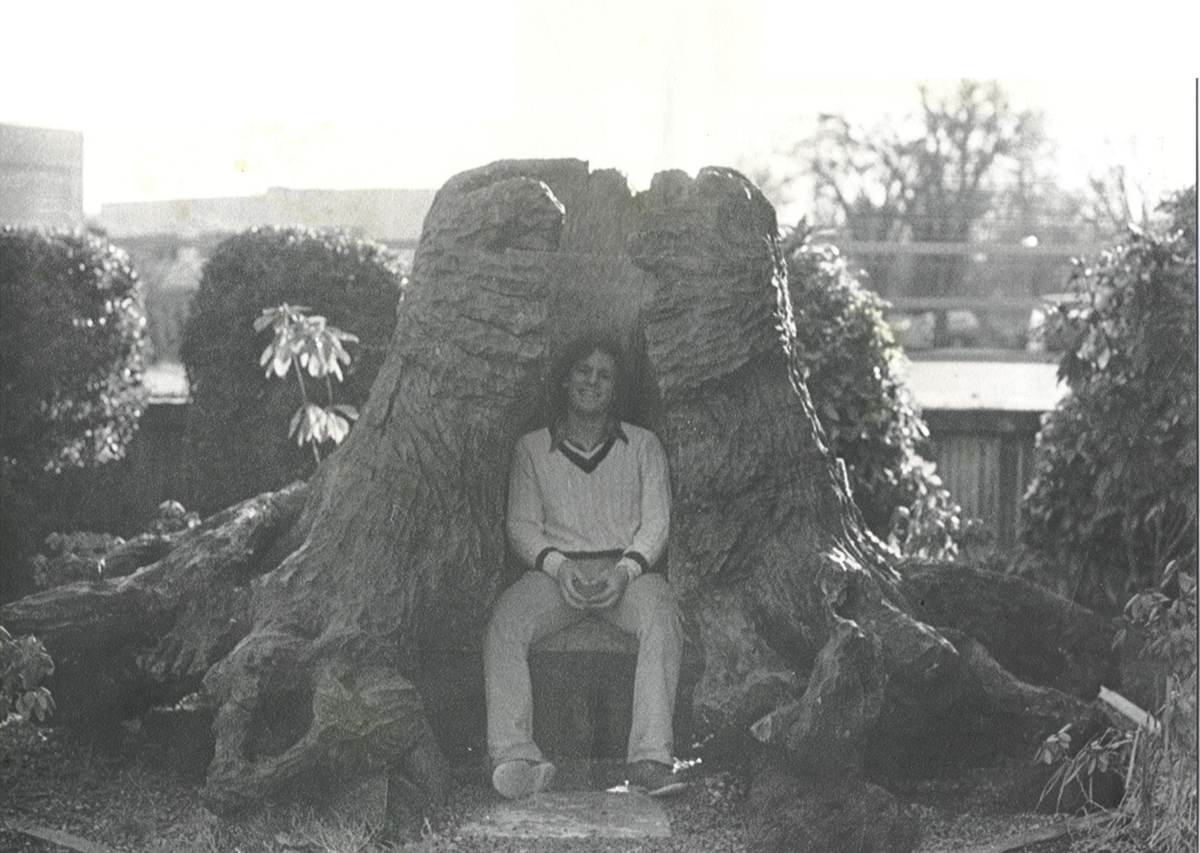 In this 1970s photo Ted Selker sits in the original memorial he made to his mother Lisa Selker, located at Lower Columbia College. 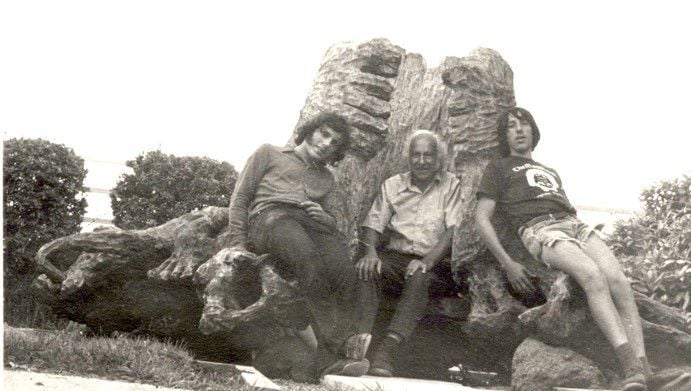 Lisa Selker's husband (middle) and two of her sons sit on the memorial bench her son Ted Selker carved in memory of her in the early 1970s. 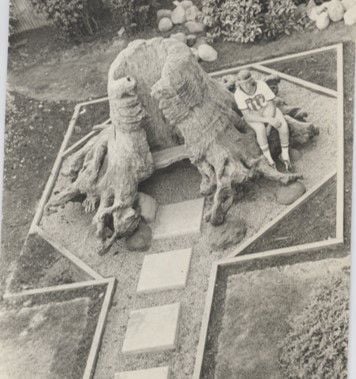 An aerial view of the memorial bench Ted Selker carved in memory of his mother, Lisa Selker, who died when he was 16 years old.

During the summer of 1975, Mark Morris graduate Ted Selker spent more than 1,000 hours carving an old oak stump into a memorial sculpture to his late mother. Lisa Selker had escaped the Nazi Holocaust and then dedicated her life to medicine and social work, starting the first Planned Parenthood clinic in Longview, among other contributions to the community.

The original carving rotted away long ago, so now Selker is searching for a student to design and build a new one.

Selker said he wants to honor his mother’s dedication and service by paying a local student to design and build the new memorial. He said he will pay up to $5,000 for materials, and he’ll pay the winner up to $3,000 per month for up to three months in the summer of 2020 to construct the sculpture. The work will be placed on the Longview Library lawn, near the Shay Locomotive.

Selker, 63, said he hopes the effort will inspire local high school or college students to be architects or artists. He is a 1974 graduate of Mark Morris High School. He has a doctorate in computer science, works for the University of California, Berkley and holds 71 patents.

“What I am is an inventor,” Selker said. “I’ve been creating all my life.”

The first carving honoring his mom was a bench on Lower Columbia College campus. He carved it out of a two-ton red oak stump. He used to sit under the oak tree canopy before it was cut down to make way for the college’s new library.

“I was walking across campus after my mother died, and I had this sculpture in mind: Hands and a seat,” Selker said. “But it was going to be expensive, and I didn’t like the designs (I saw). And then I saw this tree stump and said, ‘Wow, what if I just carved that?’ “

After getting permission from the college, he spent the summer digging up the stump and carving it to make a five-foot bench, enough for “two people to cuddle on,” he said. It featured carved hands and bears. It lasted about 15 years before succumbing to the elements.

“I remember the evening I finished it, because I had to get on an airplane to college in the morning – all these teenage kids came around and were climbing it,” Selker said, calling it a wonderful tribute to his mother that was meant to be play on and enjoyed.

He recalls his mother, who died when he was 16, as a “giving, very selfless” person. Born in Attendorn, Germany, in 1919, Lisa Selker fled the Holocaust, which claimed several family members, by moving to London. She became a nurse and midwife during World War II before moving to the United States.

Once in Washington, she started a library for jail inmates in Seattle, then opened the first Planned Parenthood clinic in Longview, Selker said.

“That was extremely difficult because it was before Roe v. Wade,” Selker said. “I mean, she got death threats.” (Roe v. Wade is the 1973 U.S. Supreme Court case, which ruled that unduly restrictive state regulation of abortion is unconstitutional.)

Lisa died in 1973, leaving behind five sons and a legacy of nurturing and working for the public good, Selker said.

Selker envisions a multi-round competition, where current or recent students from Mark Morris, R.A. Long or LCC submit proposals that he judges. (See breakout box for submission dates and rules.)

Designs would have to be approved by the Longview Visual Arts Committee, Selker said, as the group is helping organize the project.

Selker said he wants designs to “celebrate caring, courage and creativity” as well as his mother’s ideals of togetherness and sharing.

“The memorial should be inclusive and welcoming, a non-threatening gathering place for many,” Selker wrote in the contest rules. “It should be a place to bring out good and warm feelings towards others.”

For more information or to apply, email lisaselkermemorial@gmail.com.

With access to an advisory committee, each entrant will:

1. Create a proposal for a public nurturing piece of art they would construct themselves. The proposal will consist of one or two pages with drawings.

2. Create a wood, plaster, 3D printed or computer rendering to give a feeling for the piece of art as makes sense.

3. Create a budget and plan for creating the public art piece.

4. Communicate with and have the written support of officials who will have jurisdiction over where it would be placed.

January 30, 2020: Present a list of proposal concepts for the memorial

In this 1970s photo Ted Selker sits in the original memorial he made to his mother Lisa Selker, located at Lower Columbia College.

Lisa Selker's husband (middle) and two of her sons sit on the memorial bench her son Ted Selker carved in memory of her in the early 1970s.

An aerial view of the memorial bench Ted Selker carved in memory of his mother, Lisa Selker, who died when he was 16 years old.