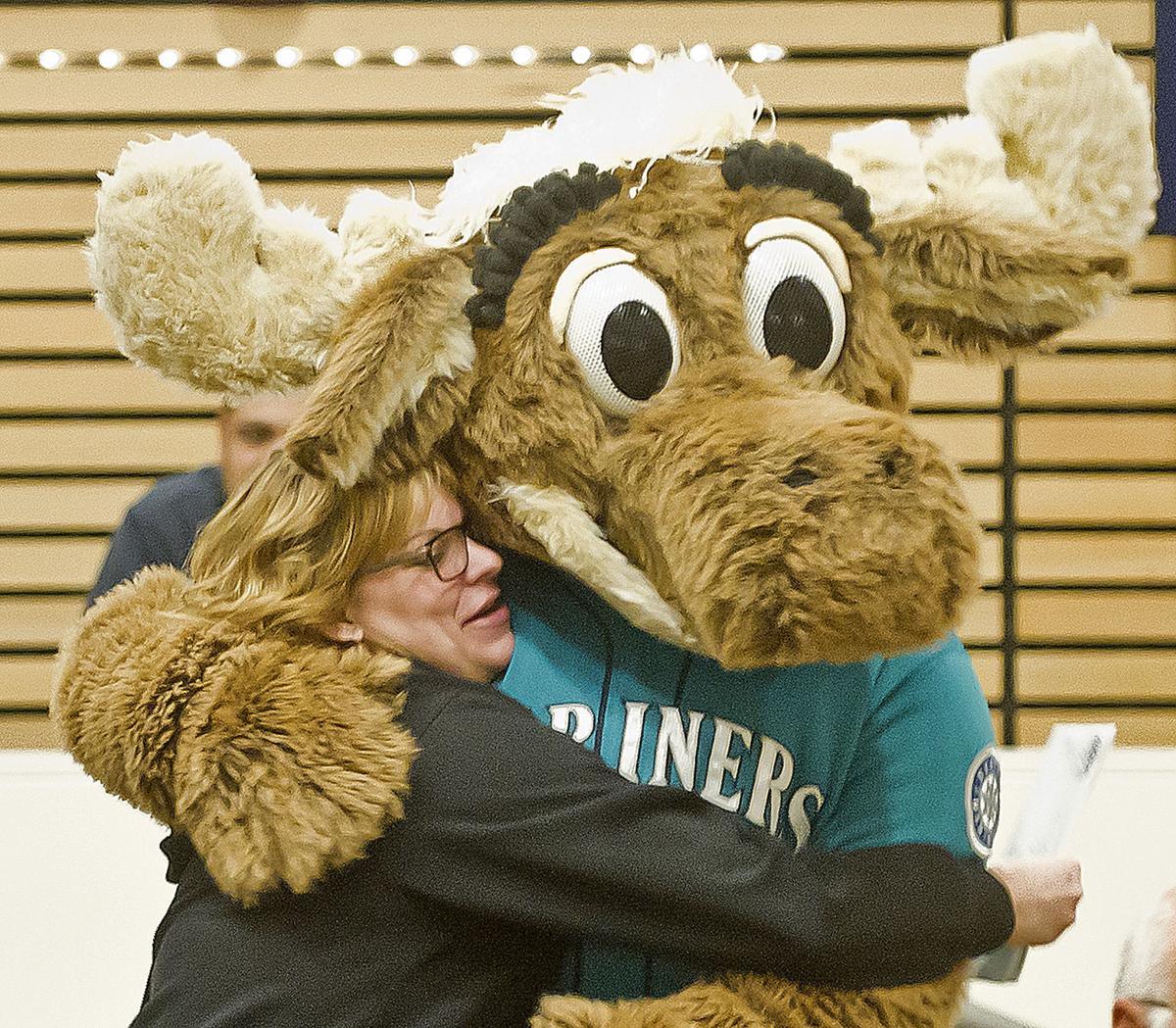 Drawing winner Tabatha Huddleston receives a hug from the Mariner Moose in addition to her door prize at Friday's Mariners Caravan event at Lower Columbia College. 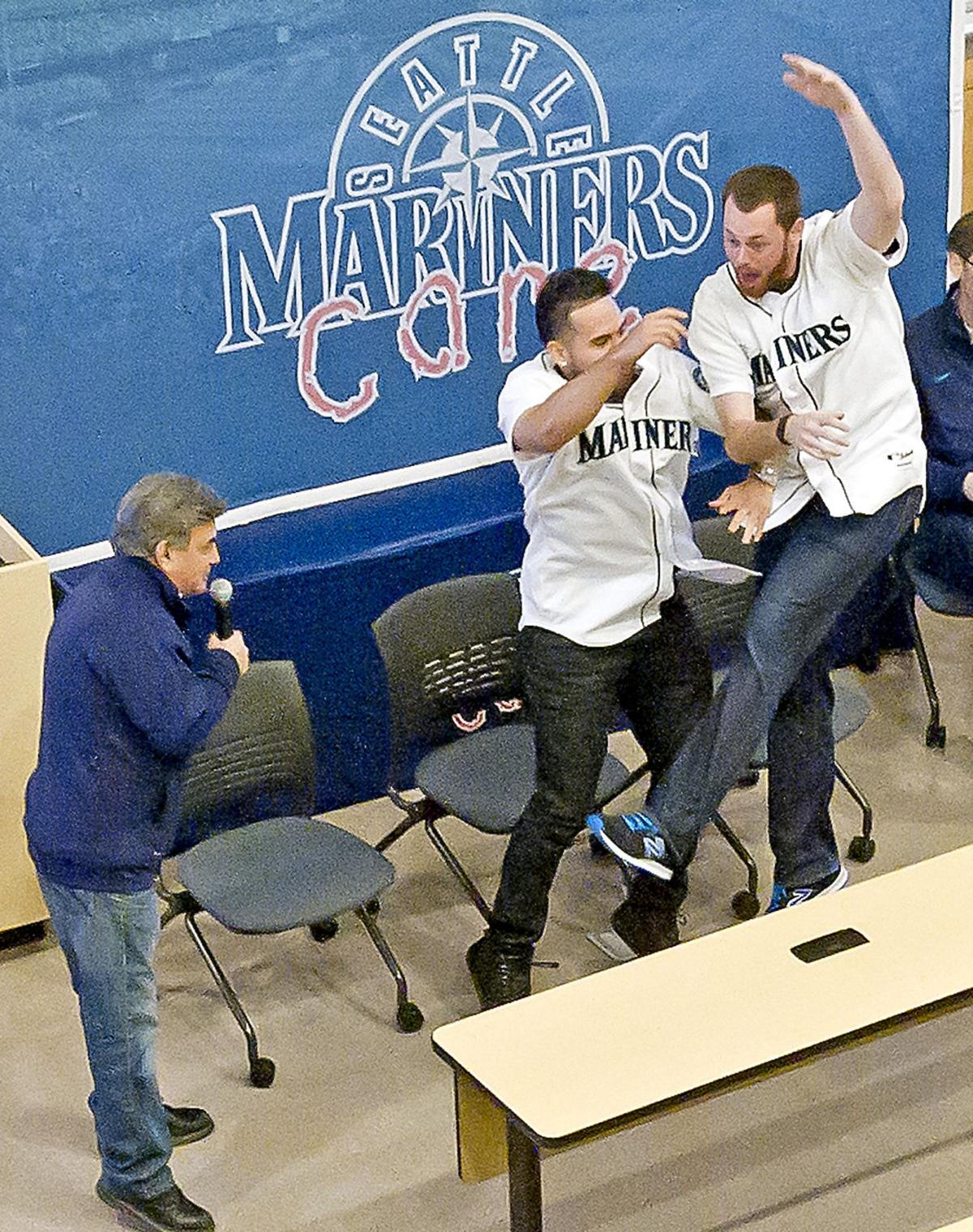 Ah, the smell of the grass, the feel of the hot sun beating down as the game stretches on — that’s all still a long way away, but it doesn’t need to be baseball season for local fans to get into the game.

A few hundred of those fans showed up to see the Mariners Caravan, the annual bus tour that brings Seattle’s baseball club to Longview during the offseason. A couple of their players, anyway.

Before filling the health and science building’s auditorium with stories and laughs, the players gave a quick pep talk to a few dozen LCC Red Devils baseball players in the foyer.

“Play as much as you can,” Romero said. “Anybody could be in the stands.”

That’s pressure enough for kids looking to strike it big, but both said they fought against the tide to reach their dreams.

“Don’t worry about failing,” Furbush said. “Another opportunity will come.”

For Romero, he actually had dreams of being a Mariner since he was in the third grade in Arizona. (And he’s got the proof on video, which his aunt sent him recently.)

LCC Athletic Director Kirc Roland said it was great to keep up the team talk, a tradition of recent years.

“These are all guys trying to make it,” he said. “A lot of (major league players) started at junior colleges,” such as Romero.

Red Devil player Rory Graf-Brennen, a recent transplant from Santa Clara, Calif., said he’s got his eyes on the big leagues as soon as they come calling.

For the full caravan session, Rizzs lit up the audience with his usual flair for humor and dishing out history. (If he comes back next year, remember that his favorite major leaguer is Hall of Fame shortstop Luis Aparicio, who played from 1956 through 1973.)

Answering more to the many children in the audience, Furbush and Romero kept a light-hearted pace and gave advice that could be stretched beyond the diamond.

“The ability to get over (failure) quickly doesn’t come easy,” Furbush said, but it’s essential to staying in the game mentally.

The Mariners Moose made his presence known when team swag and tickets were raffled off, and then the lines for autographs began.

On his way to the line, Dacota Haynes, 15, said he was a “die-hard” Mariners fan — you could tell by the jersey he was wearing.

“These two are actually two of my favorites,” he said, even though Romero played for Oregon State and Haynes is an Oregon Ducks fan. “It was pretty cool.”

When word spread in October that LaFavorites Fine Yarn and Boutique would close without a new owner, the tight-knit crafting community took to…

A Thursday morning rollover accident sent a runaway driver to jail and his passenger to the hospital.

Voters approved school operations levies in Longview, Kelso, Castle Rock and Toutle, but levies in Kalama and Woodland failed, according to Tu…

Drawing winner Tabatha Huddleston receives a hug from the Mariner Moose in addition to her door prize at Friday's Mariners Caravan event at Lower Columbia College.