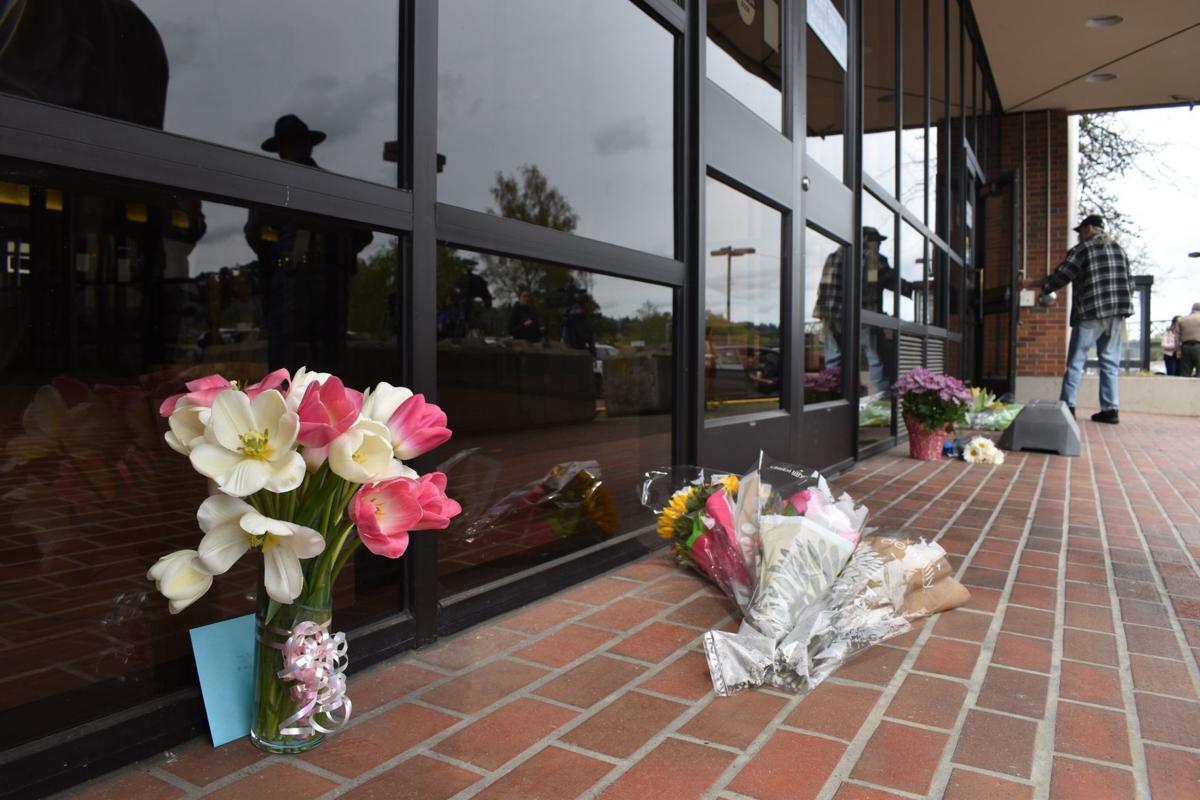 Flowers left outside the Hall of Justice 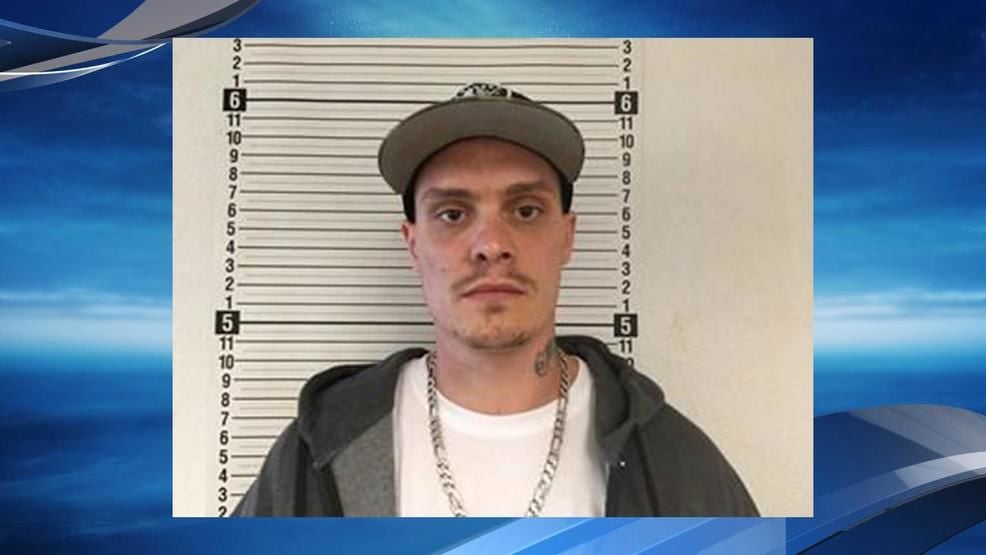 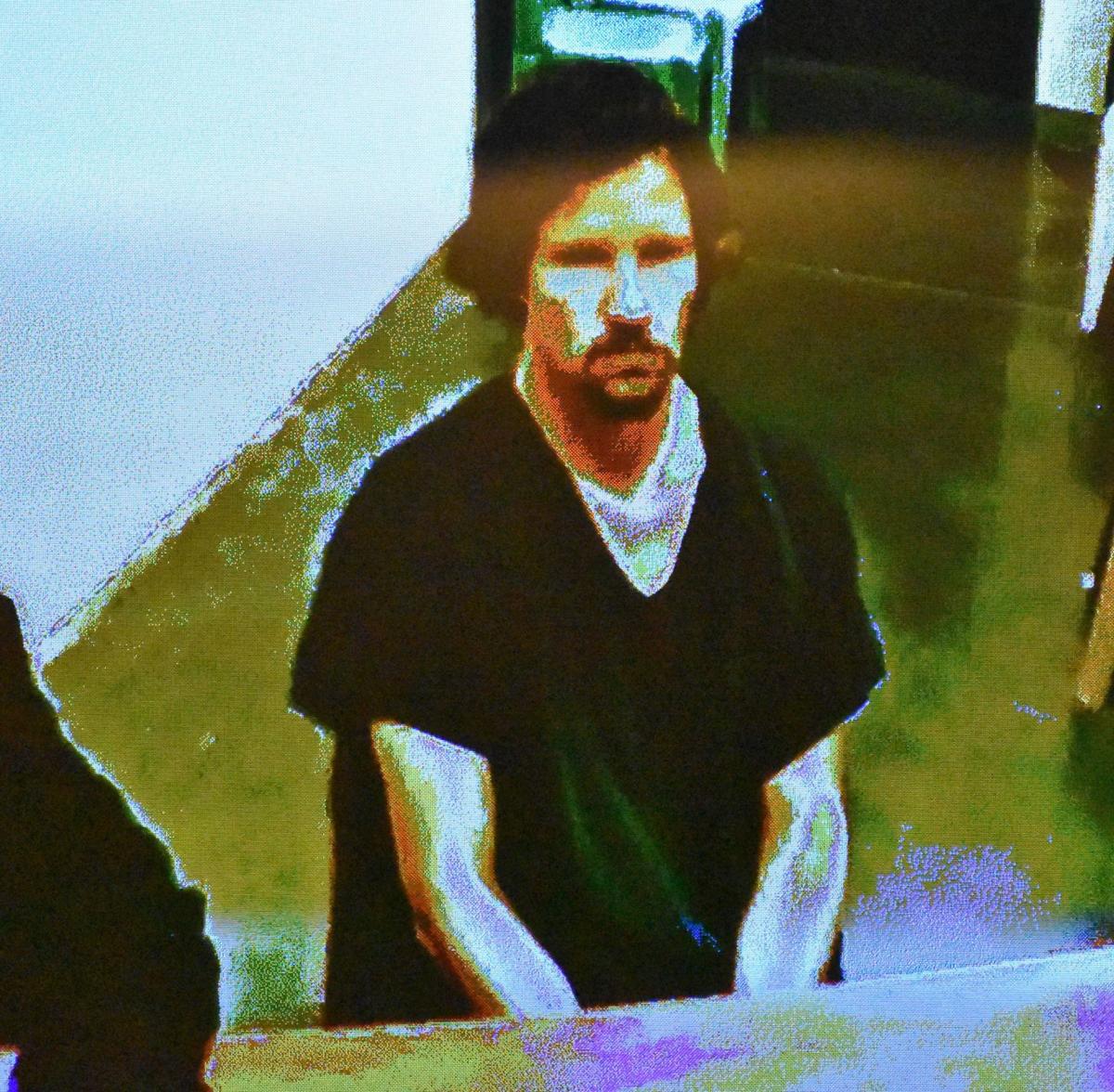 Authorities have identified the man who died in an officer-involved shooting Sunday night as Brian Dee Butts of Longview.

Butts, 33, is believed to have shot and killed Deputy Justin DeRosier Saturday night along Fallert Road in Kalama.

Butts is the half- brother of Daniel Armaugh Butts, who recently was handed a life sentence with a minimum of nearly 49 years in Oregon prison for the fatal shooting of Rainier Police Chief Ralph Painter in January 2011.

If further investigation confirms that Brian Butts killed DeRosier, it will mean the two brothers will have been responsible for the only on-duty police killings in the local area in more than 70 years.

An autopsy of Brian Butts is scheduled for 7 p.m. Tuesday. He has a lengthy criminal history.

The Cowlitz County Coroner’s Office did not release further details of Butts’ death on Sunday pending the autopsy.

In other developments in the DeRosier shooting, Cowlitz County Superior Court Judge Michael Evans Monday found probable cause to hold Matthew Veatch, 25, who is suspected of aiding Butts in his escape from law enforcement after the shooting.

Veatch and his brother Michael Thomas Veatch, 33, both of Kalama, were arrested by Longview police on Sunday after being interviewed by investigators: Matthew Veatch on suspicion of first-degree rendering of criminal assistance, and Michael Veatch for an outstanding Department of Corrections warrant.

Cowlitz County Prosecutor Ryan Jurvakainen told The Daily News that his office had not filed any charges linking Michael Veatch to the shooting as of Monday afternoon.

“We have not received any referrals with reference to Michael Veatch,” Jurvakainen said.

But Matthew Veatch told Longview police that Butts showed up at his Fallert Road residence several minutes after he heard what sounded like a gunshot the night of DeRosier’s death, according to court documents. Butts “appeared dirty and stated he needed to get out of there,” and he gave Veatch a handgun to “get rid of.”

(Michael Veatch had arrived just 10 minutes before Butts, according to court records, looking “more serious than normal.” There was no further information on his relationship to the case.)

Matthew Veatch put the gun in a locked gun cabinet in his room, he told officers, and lead Butts on foot through the dark woods for several hours. Along the way, Butts told Matthew Veatch he shot a cop, according to court documents.

Matthew Veatch eventually led him to an abandoned barn, where the two separated. Veatch is currently held in lieu of $50,000 bail and will be arraigned on April 30.

“We believe those who committed and helped cover up the murder of (DeRosier) have been found, though the investigation is ongoing,” Thurman said during a press conference. “I believe any threat to the community is over.”

Thurman commended the Kelso officers who engaged with Butts Sunday night, and said that while law enforcement is relieved the threat is gone, the ideal outcome is always to bring a suspect to justice through the courts.

The two officers involved in the shooting are Rich Fletcher and Detective Tim Gower. They’ve each worked for the Kelso Police Department for 24 years.

Butts was seen tromping out of the woods wet and dirty with a firearm on Spencer Creek Road. The two lawmen shot him, and he was declared dead at the scene, Thurman said. The shooting took place around 7 p.m. and neither officer involved was injured.

Further details of the encounter still were not available Monday afternoon.

Sunday night’s shooting concluded a nearly 22-hour manhunt for those responsible for killing deputy DeRosier on Fallert Road just after 10 p.m. Saturday. DeRosier was fatally shot while checking out a disabled motorhome that was blocking Fallert Road, which is three miles east of Interstate 5 at the north end of Kalama.

The registered owner of the motorhome, when called, reported the vehicle had been sold to Butts, according to court records.

DeRosier responded alone to the call, Thurman confirmed, which was standard practice because it was a relatively low priority call.

“It comes down to resources,” Thurman said. “We’re already hurting on deputies ... That type of call, we get to it when we get to it. I don’t see that changing long-term, how we respond to these types of calls. We’re certainly going to be extra cautious on any interaction with the public.”

DeRosier died at PeaceHealth Medical Center in Vancouver a short time after he was flown there by LifeFlight helicopter, the sheriff’s office reported. He leaves a wife, Katie DeRosier, and a five-month old daughter, Lily, his first child.

Outside the Hall of Justice Monday, passersby dropped off flowers and cards for DeRosier and other deputies.

Elected state and county officials over the weekend and Monday expressed grief and sympathy for DeRosier’s family and the Cowlitz County Sheriff’s Office.

A 6 p.m. Kelso City Council meeting Tuesday night will set aside time to remember DeRosier and discuss the importance of law enforcement in the community, City Manager Steve Taylor said.

“Our hearts go out to the family of the Cowlitz County deputy killed in the line of duty last night. Every one of these tragedies is a reminder that these men and women put their lives on the line every day in service to us all,” Washington Gov. Jay Inslee tweeted Sunday.

A funeral procession for DeRosier will begin Monday in Clark County at 6 p.m. and make its way to Kelso via the Allen Street exit, ending at the Dahl McVicker Funeral Home. Local safety agencies will be in attendance.

Note: An earlier version of this story misspelled Brian Butts’ middle name, due to incorrect information that was released to media at the time. This story has also been updated to clarify that Daniel Butts will be eligible for parole after serving nearly 49 years of his life sentence.

Red Leaf Coffee is sponsoring a fundraiser Wednesday for the DeRosiers. The coffee shop will donate 20 percent of all its sales that day to the family. The fundraiser will take place at all Red Leaf locations, said General Manager Ann Lucas.

“Law enforcement and Justin and his family are very dear to Red Leaf and our community, and we really felt this could be a platform for people to donate and give back,” Lucas said.

Flowers left outside the Hall of Justice