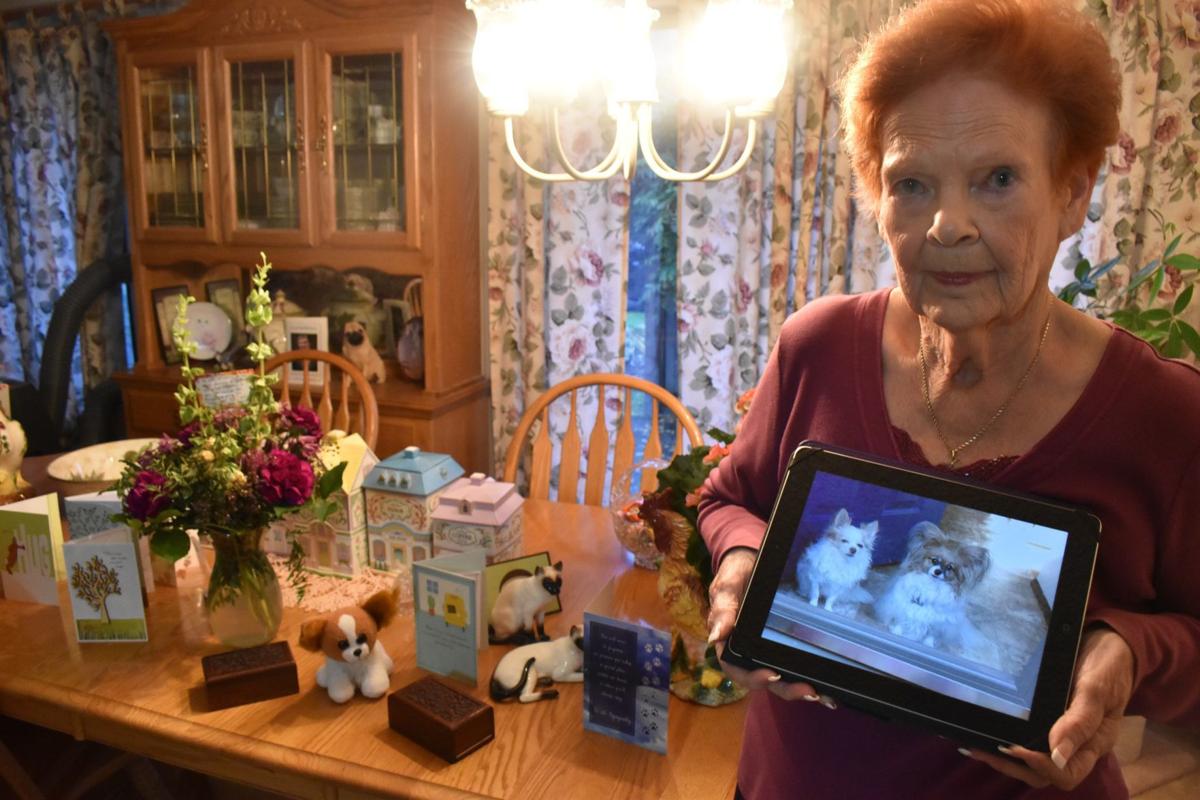 Rosalie Maitland shows a picture of Samson and Bella next to a dining room table displaying cards and flowers sent to her by neighbors and friends, as well as two cremation boxes containing the ashes of the two dogs. 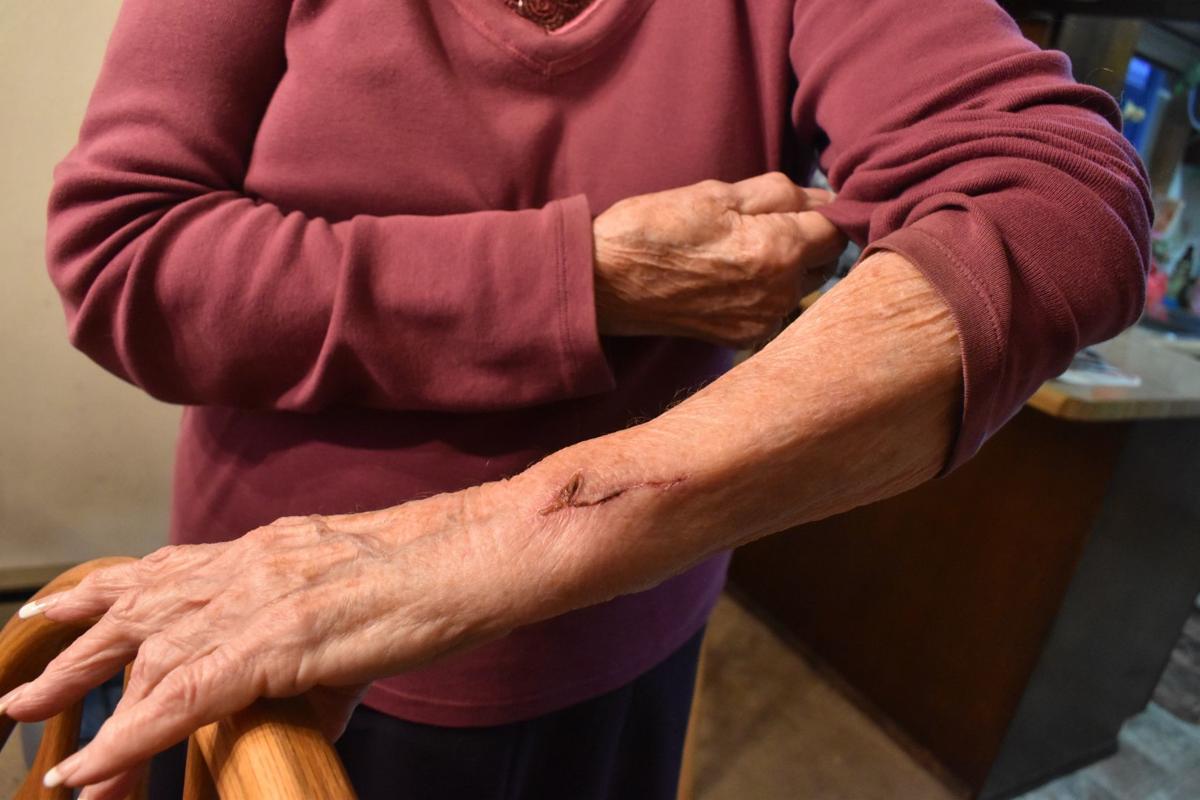 Rosalie Maitland shows a healing wrist injury she said she sustained while trying to rescue her dog Bella during a sudden attack by two other dogs the morning of Oct. 15.

A West Longview woman’s dogs died and she suffered a wound to her arm last week after two loose pit bulls mauled her chihuahua and papillion on the sidewalk outside her Robbins Addition home. She’s insisting that authorities euthanize the pit bulls.

The owner of the pit bulls — a neighbor who lives about 1,000 feet away — said he’s doing everything he can to make things right. He’s paid the woman’s veterinary bills. The Humane Society has already required him to register the pit bulls as “dangerous dogs.” He also says it’s not clear whose dogs started the fight.

Rosalie Maitland, 81, was walking her chihuahua Samson and papillon Bella for their regular morning walk at about 6 a.m. Oct. 15.

While standing on the sidewalk in front of her home, two pit bull dogs she’d never seen before “came out of nowhere,” Maitland said, and “instantly, viciously” attacked her dogs.

Maitland, a widow, said she was “no match” for the pit bulls, one of which she said had Bella’s head entirely in its mouth. She grabbed and extricated Bella from behind, getting a gash in her arm from the pit bull in the process. Meanwhile, the other dog was “tearing (Samson) to pieces.”

“He tore off his whole snout,” Maitland said. “All his skin and fur off his body.”

A neighbor, Rex Boswell, heard her calls for help and helped distract the pit bulls.

His wife and another neighbor took the pit bulls back to their owner, while he drove Maitland and her two dogs to a Rainier veterinarian. There was “no way” to save Samson, whom the vet euthanized that day. Bella went into surgery but died the next day from cardiac arrest, Maitland said.

Maitland had her arm treated and received a tetanus shot and antibiotics.

The event has traumatized Maitland: “I wake up at 2:30, 3 in the morning, sobbing. The minute I wake up, I visualize all of that. I can’t stop crying.”

According to Humane Society Executive Director Charmaine Nawrocki, Maitland’s report to the agency said the two pit bulls charged her and her dog, catching her off guard.

She also said this was the first incident the Humane Society is aware of involving the two pit bulls, and that they have no other citations for violent behavior or being off leash. However, the Humane Society has made a “dangerous dog” declaration for the two dogs, which means the owner must carry pet insurance, place signs in his yard indicating the dogs are dangerous and not allow the dogs outside without him holding their leash.

“I think they should be euthanized,” Maitland said of the pit bulls. “It was an instant attack, a vicious attack. My little dogs only weigh 7 pounds. They didn’t stand a chance. … What if somebody’s little child was out there and got attacked by those dogs?”

Nawrocki said that as long as the owner follows the dangerous dog declaration rules, he would be able to keep the animals. If he fails to do so, the animals would return to the county’s shelter. Since the county would not able to give the animals up for adoption, they would be euthanized, she said. Nawrocki said she couldn’t speak to what could be ordered in a separate civil court case.

The owner of the pit bulls agrees that what happened was “a horrible situation.” (The Daily News is withholding his name because he has not been charged with a crime.)

He said he’s tried to make amends to Maitland, including paying her vet bills. (Maitland confirmed that he paid the bills, which she said likely totaled thousands of dollars. The pit bull owner could not be reached Wednesday to clarify the amount.) He’s called her to apologize, although Maitland said she’s not interested in talking.

“A couple of friends listened to the voicemail,” she said. “He said he was so sorry (and) wanted to know what he could do. … There isn’t anything he could do for me. I’m going to seek damages.”

The pit bull owner said he’s just trying to resolve the issue and help both parties put the incident behind them so his pit bulls can live. He declined to say how the dogs got out but said the problem has been fixed. He said he’s concerned about retaliation from people who dislike the breed. And he contends that based on reports to the Humane Society, it’s not even clear how the fight between the dogs got started or which dogs were the aggressors.

“They can’t tell me who started it,” the owner said. “It’s not clear how everything started. ... I’m not putting any dogs at fault. Nobody’s fully seen how it started.”

The pit bull owner said his dogs “have no history whatsoever of being violent.” One is only a six-month old puppy, he said. And he said his dogs were affectionate and loving when the Humane Society visited his home after the Oct. 15 encounter. It was not clear how or why they were loose on the day of the attack.

“Trying to place the blame on my dogs, that don’t have a history of violence, is not OK.”

Rosalie Maitland shows a picture of Samson and Bella next to a dining room table displaying cards and flowers sent to her by neighbors and friends, as well as two cremation boxes containing the ashes of the two dogs.

Rosalie Maitland shows a healing wrist injury she said she sustained while trying to rescue her dog Bella during a sudden attack by two other dogs the morning of Oct. 15.