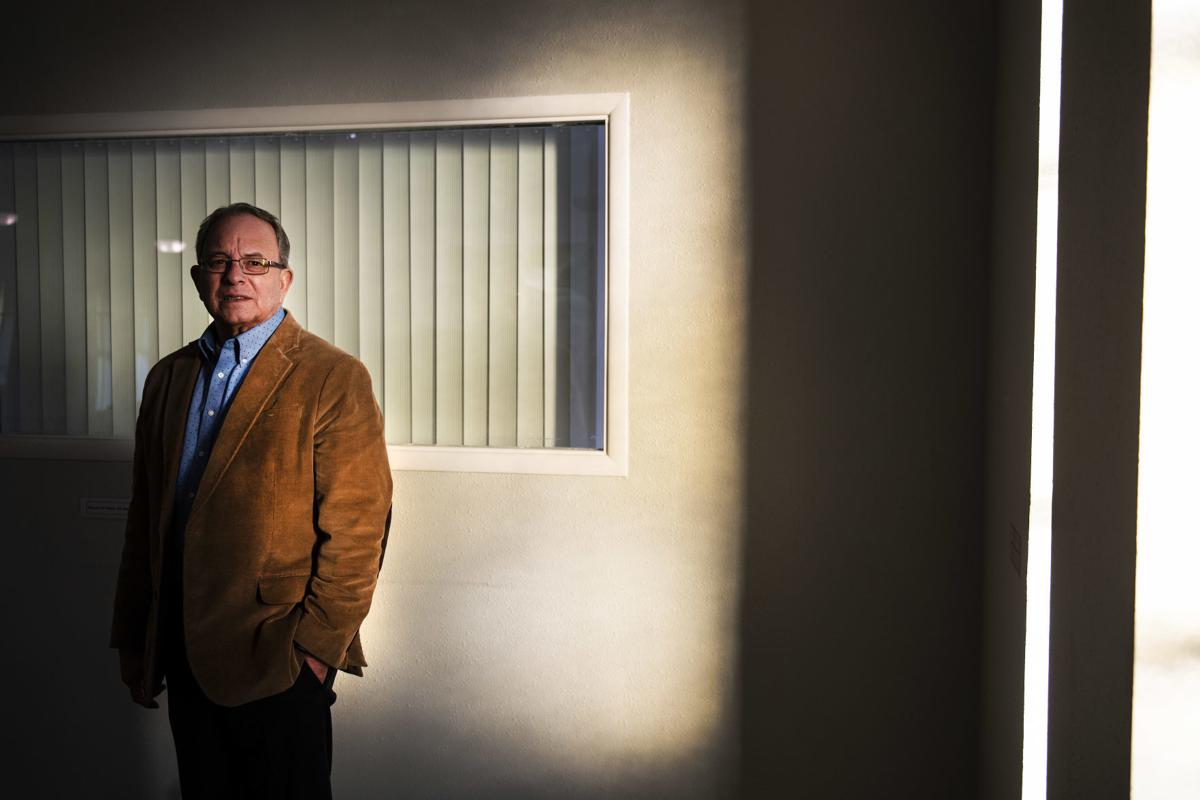 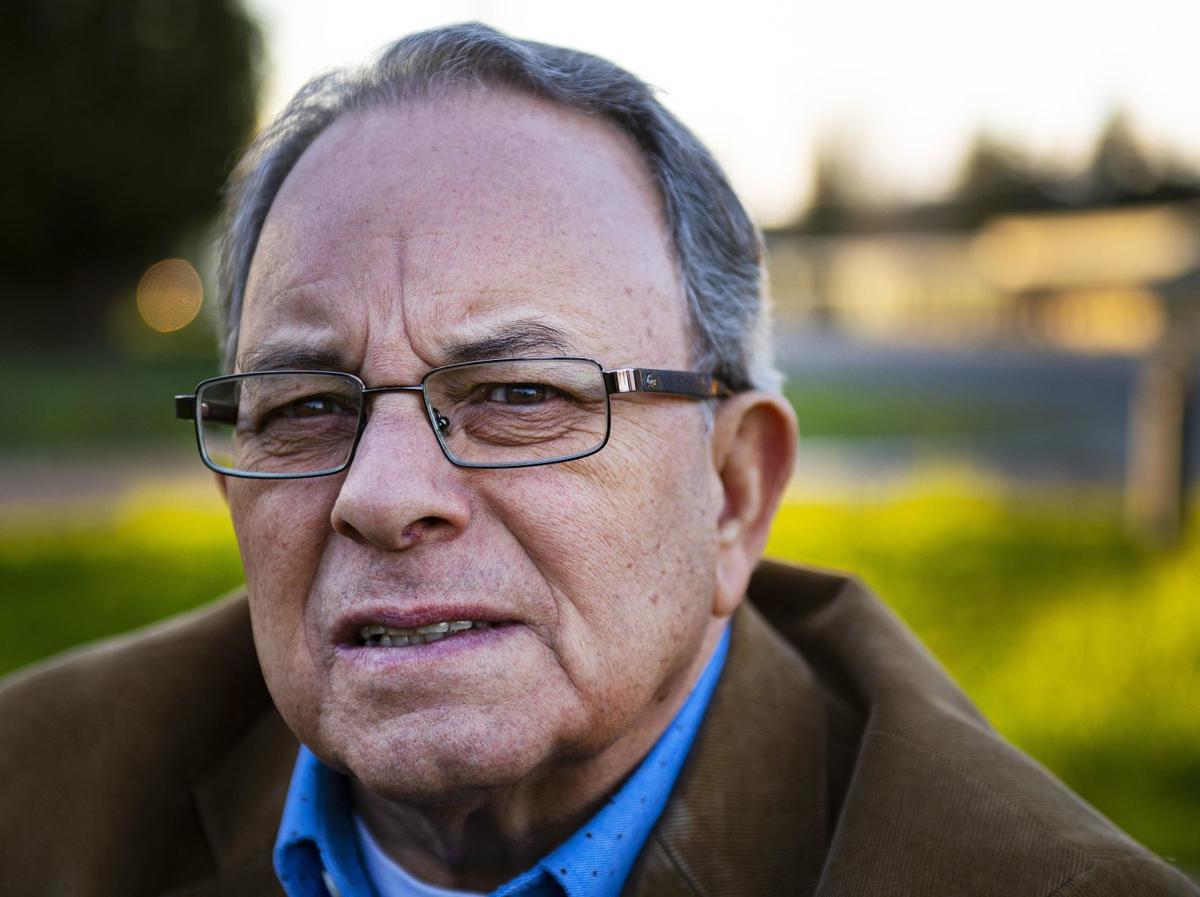 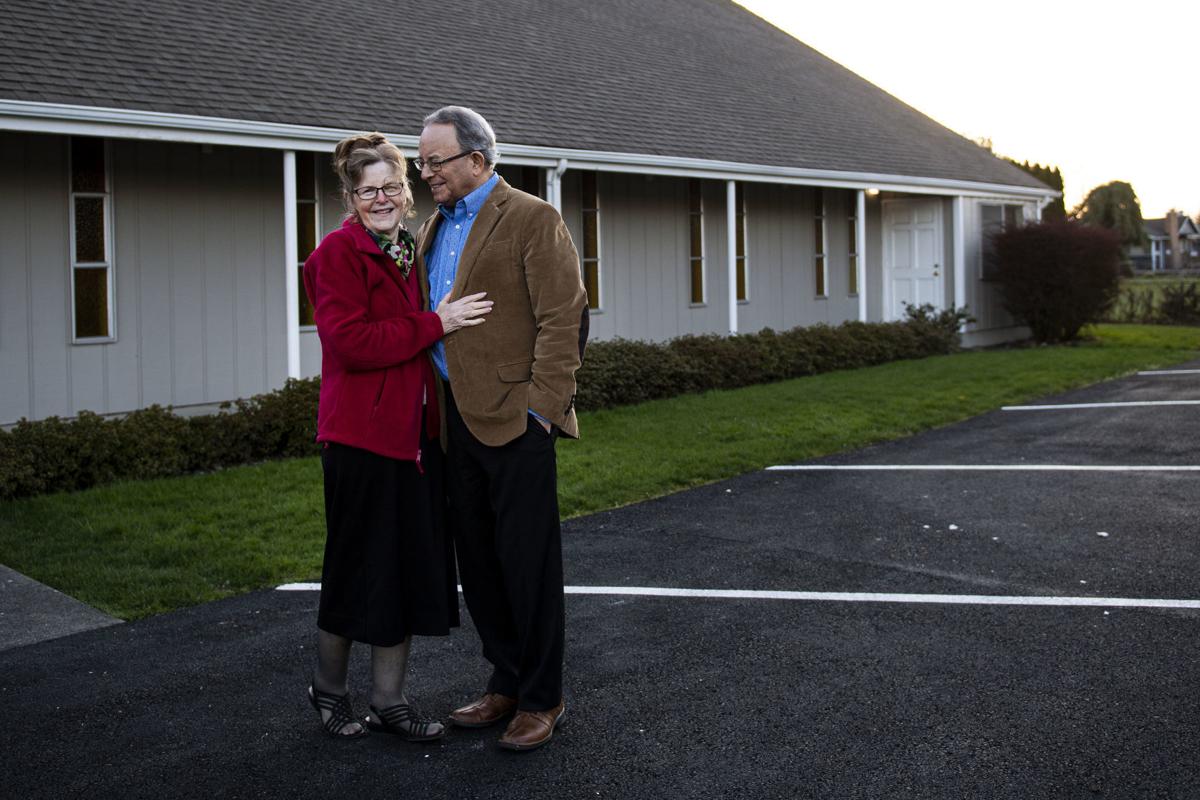 Pastor and recovered COVID-19 patient Perry Hanchey, right, smiles toward his wife Mary Hanchey, who helped him through the recovery process and displayed mild symptoms herself, outside Longview Pentecostal Church Thursday evening.

Less than three weeks ago, the Rev. Perry Hanchey was quarantined in the hospital so sick with complications from COVID-19 he thought he might not make it.

“I’ve never been sick like this, ever,” he said Thursday. “I’m just glad to be around.”

Hanchey, 70, spent five days in PeaceHealth St. John Medical Center with pneumonia in both lungs. The previous week, he’d been sick at home with weakness, chills and fevers spiking to at least 103 degrees.

Now recovered, the pastor of Longview Pentecostal Church was one of the first two confirmed COVID-19 cases in Cowlitz County, which that Health and Human Services reported on March 20.

Hanchey said he’s not sure where he caught the virus. He traveled through multiple airports at the end of February when returning from visiting his sister in Colorado. In the first week of March, he attended a conference in Tacoma.

On Sunday, March 8, Hanchey held a church service in Longview and began feeling sick that night. The next day the virus was “really kicking in,” he said. After working outside for a couple of hours Monday morning, Hanchey said he “was sicker than a dog” with a fever and lack of energy.

COVID-19 symptoms include fever, cough and difficulty breathing. Symptoms may appear two to 14 days after exposure, according to the Centers for Disease Control and Prevention.

Over the next few days, Hanchey’s temperature went up and down, spiking to around 103 degrees. He had no appetite and lost 23 pounds in three weeks.

“I could hardly walk,” he said. “I just wanted to curl up somewhere. … That week I felt I was going to die.”

On Friday, March 13, he called his primary care physician, Rich Kirkpatrick, who told him it sounded like he had COVID-19. Before that, Hanchey said he never considered that he might have the coronavirus. At first he thought he caught a bad cold after working outside on a chilly day, and when symptoms quickly worsened he “didn’t stop to think about any of it.”

When Hanchey went to the doctor’s office, his fever had broken but he was still weak and had some trouble breathing. Kirkpatrick checked his lungs, tested him for the virus and sent him home.

Hanchey’s illness worsened over the weekend and his wife, Mary, took him to the emergency room on Monday. She had to use a hospital wheelchair to bring him in because he didn’t have enough breath to walk, Hanchey said.

Doctors tested Hanchey’s oxygen level and found he had pneumonia in both lungs. He said he couldn’t blow any air out and couldn’t lay down. Results from his first COVID-19 test weren’t back yet, so the hospital tested him again.

Hanchey spent the next five days in isolation at St. John. He was on oxygen and given antibiotics for the pneumonia. Staff suited up in protective gear including masks, gloves and medical gowns whenever they came in his room, Hanchey said. Only his wife was allowed to see him at first, and then even she wasn’t let in, he said.

“It was a terrible week,” he said. “I was doing some arguing with the Lord. I didn’t think I was going to make it.”

When Hanchey’s condition was at its worst, he said he started to question God. “I had a good talk with the Lord. ... I said, ‘Lord, I’m not done yet.”

Hanchey took a turn for the better on Thursday, March 19, when he was able to breathe a little deeper. By Friday, he could walk around the room and breathe without being on oxygen. That day, March 20, his COVID-19 test came back positive.

“When she (the nurse) first told me that, it kinda scared me,” Hanchey said. “But she said, ‘Listen, you are very fortunate. You beat that virus.’ I said, ‘Thank the Lord for that.’ It was a relief.”

The hospital discharged Hanchey that day. Before leaving, he asked if his wife could be tested as well, but said staff told him they know she was positive because she’d been with him the whole time he was sick.

Hanchey said his wife was sick the first week he was, but less seriously. The virus may have hit him harder because his lungs are likely damaged from years of welding.

“She really saved me that week,” he said. “A lot of prayer went up for us. I feel very thankful to be alive.”

Hanchey and his wife have been isolating at home since. He said he is feeling better and his lungs have cleared up.

The health department told Hanchey he could leave his home for essentials 72 hours after his fever and symptoms are gone. Hanchey said he and his wife are still “laying low. He said he feels nervous to go to the grocery store, despite his recovery, even though someone released from isolation is not considered to pose a risk of infection to others, according to the CDC.

Hanchey said he feels bad about going out in public in the days before he started feeling sick, but he didn’t know he had been exposed to the virus. He said he wouldn’t have gone to church on March 8 if he knew.

“That’s the scary part, you don’t know who has it or doesn’t,” he said.

One member of the congregation tested positive for COVID-19, Hanchey said, but the man did not get sick. Two other members of the church were sick from other health problems and are doing fine now, Hanchey said.

According to the CDC, people are thought to be the most contagious when they are the sickest, but more recently the virus has been detected in people without symptoms.

Cowlitz County Health and Human Services identifies and notifies all close contacts of confirmed cases and asks them to self-quarantine for 14 days. Hanchey said he also sent messages to everyone he’d been around, letting them know he tested positive for COVID-19.

“I’d feel terrible if I gave it to somebody,” he said.

Hanchey suggests people abide by the stay-at-home order to keep from catching the virus. He also suggested getting a thermometer and a device to check oxygen levels to monitor symptoms.

Researchers are investigating the use of plasma from those who have fully recovered COVID-19 to treat patients with the virus. Hanchey said he would be willing to donate plasma once he is fully healed.

“I’m glad I came out a success,” he said. “I felt like I was on a battlefield. A lot of hands helped pull me out.”

Pastor and recovered COVID-19 patient Perry Hanchey, right, smiles toward his wife Mary Hanchey, who helped him through the recovery process and displayed mild symptoms herself, outside Longview Pentecostal Church Thursday evening.