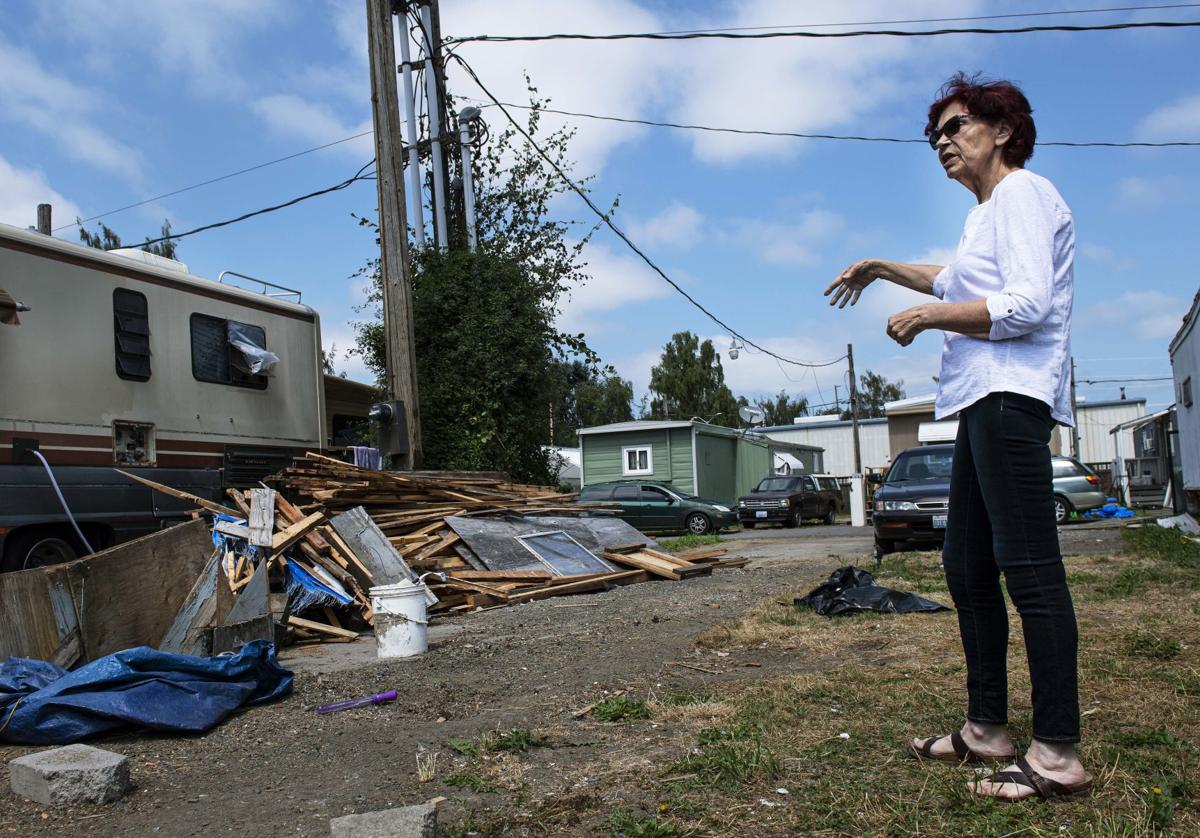 Margaret Vockrodt, manager of Columbia Court Homeowners Cooperative in Longview, details her vision of building a community park where an old mobile home was recently torn down. 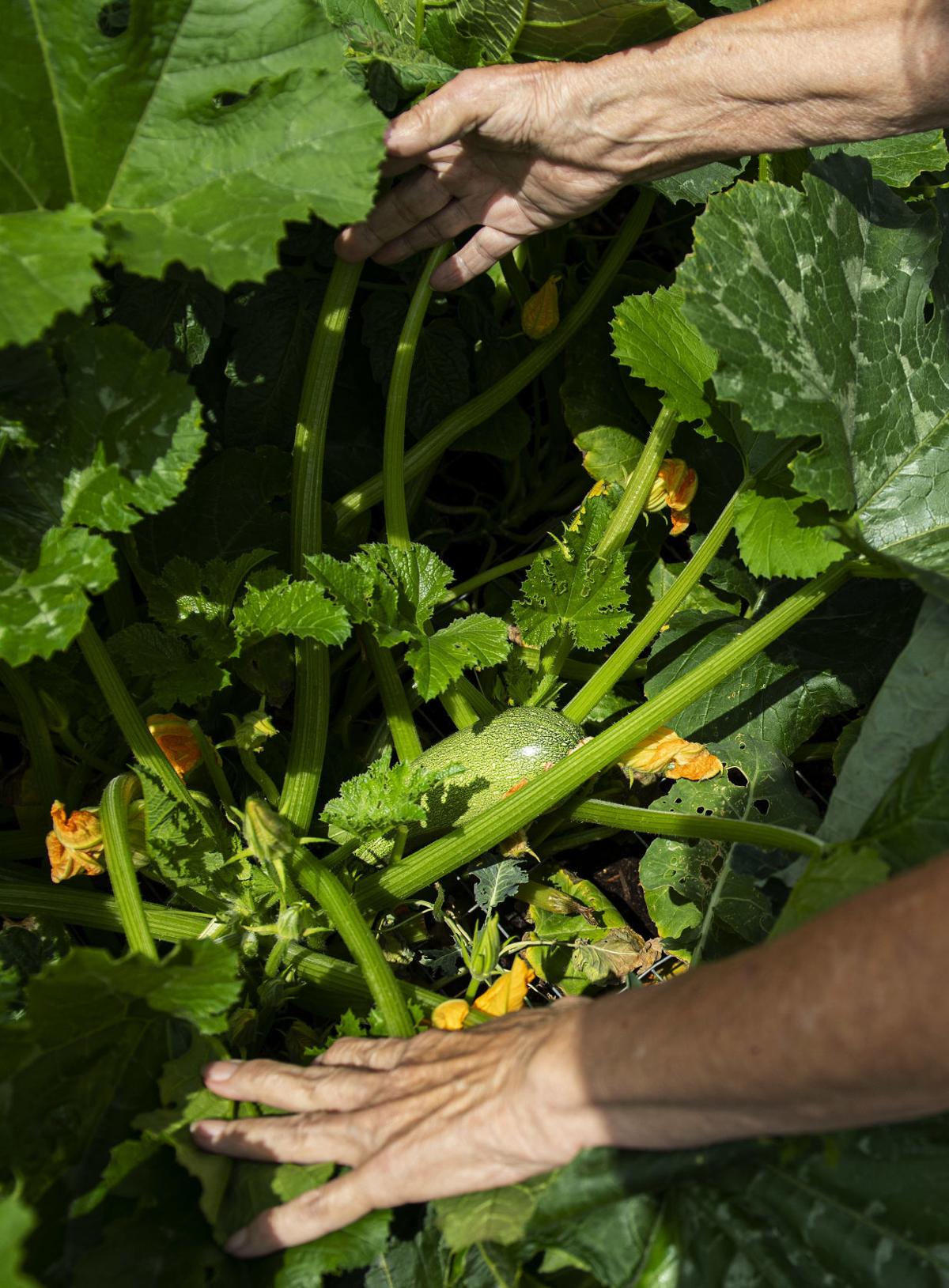 Margaret Vockrodt shows off the blooming squashes in Columbia Court Homeowners Cooperative's garden, one of several additions to the mobile home community since the residents bought out the previous owner to form a co-op.

For years, Margaret Vockrodt and her neighbors at the Columbia Trailer Court asked in vain for the park manager and owner to repair leaking water lines, solve drainage problems and tear down an empty ramshackle home.

Their requests were often ignored, and the park off Oregon Way was plagued by patches of overgrown weeds, buildings chipping paint and unfilled lots.

But in the last few months, Vockrodt and the other tenants in the 37-lot park have created a laundry room, spruced up the bathrooms and painted the office building. And a sense of pride is washing over the park, prompting residents to start sprucing up their lots, too.

The transformation is occurring because residents were able to buy the park under a state program meant to preserve low-income housing and brake the rise of homelessness. Tenants have renamed the place Columbia Court Homeowners Cooperative, the first mobile home co-op in Cowlitz County assisted by nonprofit ROC Northwest.

Darrin Lucas, resident and co-op board treasurer, said they’re trying to bring the park to a higher standard.

“People are taking ownership of the place. It’s not what it used to be,” Lucas said. “For the old owner, this was his business. He wanted it to make money. Now it’s our money working to fix our home.”

“Everyone is happier than we were because we’re trying to make this a family here, not just a group of people living in the same place,” Vockrodt said.

Co-op residents pay a lifelong $100 membership fee, which is refunded if they move out, she said. In return, each member household gets a vote in board decisions, including capital improvements and electing board members.

Vockrodt said the co-op intends to keep rent, now $460 plus utilities, the same as long as possible. Previously, rent increased by $25 to $50 at least every other year, she said.

The park is also catching up on major repairs and improvements previous management ignored, including sewer and drainage improvements and street repairs, Vockrodt said. She also wants to build a small park or community gathering space in an empty lot.

Vockrodt said she’s had a hard time hiring crews to do this work because of the park’s reputation. Many vendors didn’t get paid or had to fight to get paid by previous management, she said.

ROC Northwest approached the owner, Alexander Horvat of Torrance, Calif., about buying the park when he put it up for sale in the spring of 2018. ROC began working with residents to help them form the cooperative in May.

The co-op bought the park in February for $1.2 million, financed by loans from the Washington Community Reinvestment Association and Washington State Housing Finance Commission. ROC Northwest searches for manufactured housing parks up for sale and works with residents to create a co-op and secure financing, said Miles Nowlin, cooperative development specialist.

“It’s essentially taking a form of affordable housing that already exists and secures it as such and empowers people that own their homes already to run it independent of an outside agency or nonprofit,” he said.

This model allows residents to get out of a “risky situation” where they are susceptible to rent increases, rule changes, or losing their homes if the park is sold for redevelopment, Nowlin said. Over the past five years, an average of four manufactured home communities per year are torn down for redevelopment, he said. These closures, and rising rents at privately owned parks, are among the causes of increasing homelessness in the region.

As a co-op, the park is still run as a business, but instead of revenue going to the owner or investors, it goes into improving the park, Nowlin said. Rents among resident-owned communities across the country are increasing no more than 2% per year, compared to 5% or more among privately owned parks, he said. Columbia Court ay be able to avoid rent increases for up to 10 years, Nowlin said.

ROC Northwest is facilitating two co-op conversions per year in Washington. Nowlin said it would like to be doing more, but the market for manufactured home parks is competitive, he said.

“There are investors from all over the world here in Washington turning very good profits off of the manufactured housing business,” Nowlin said. “We get outbid usually once or twice a month. We’re having a hard time finding deals that will work for the residents.”

The Washington State Housing Finance Commission works with ROC Northwest and residents by financing a bank loan with favorable terms to the cooperative. But Nowlin said ROC is looking for more support from the state.

“I think we’ll continue to have success, but we need support to subsidize our work and changes in the law to give residents more protection to stay where they are and have a secure future in the home that they own,” he said.

The co-op is also a benefit to the City of Longview because it provides affordable housing at no cost to the city or taxpayers, Nowlin said. Columbia Court was financed through traditional lending dollars and has not received one dollar of subsidy from the state, he said.

Despite the benefits of the co-op model, Nowlin said it is not without flaws and challenges. For Columbia Court, the board is made of residents volunteering many hours to run the co-op, he said.

“They’re taking accountability and ownership and holding their neighbors accountable,” Nowlin said. “That can add a lot of stress to somebody’s life.”

Manufactured housing and mobile home parks are important forms of affordable housing that often have a negative stigma around them, Nowlin said.

“We are trying to debunk that and challenge that stigma, to show folks that really wonderful individuals and families live in these communities, who are struggling financially but are doing whatever they can to keep a roof over their heads,” he said.

Vockrodt and Lucas said they just want the community to know Columbia Court is “not what it used to be.”

“Keep moving forward, that’s what we’re going to do,” Lucas said. “We hope the community recognizes that.”

Margaret Vockrodt, manager of Columbia Court Homeowners Cooperative in Longview, details her vision of building a community park where an old mobile home was recently torn down.

Margaret Vockrodt shows off the blooming squashes in Columbia Court Homeowners Cooperative's garden, one of several additions to the mobile home community since the residents bought out the previous owner to form a co-op.