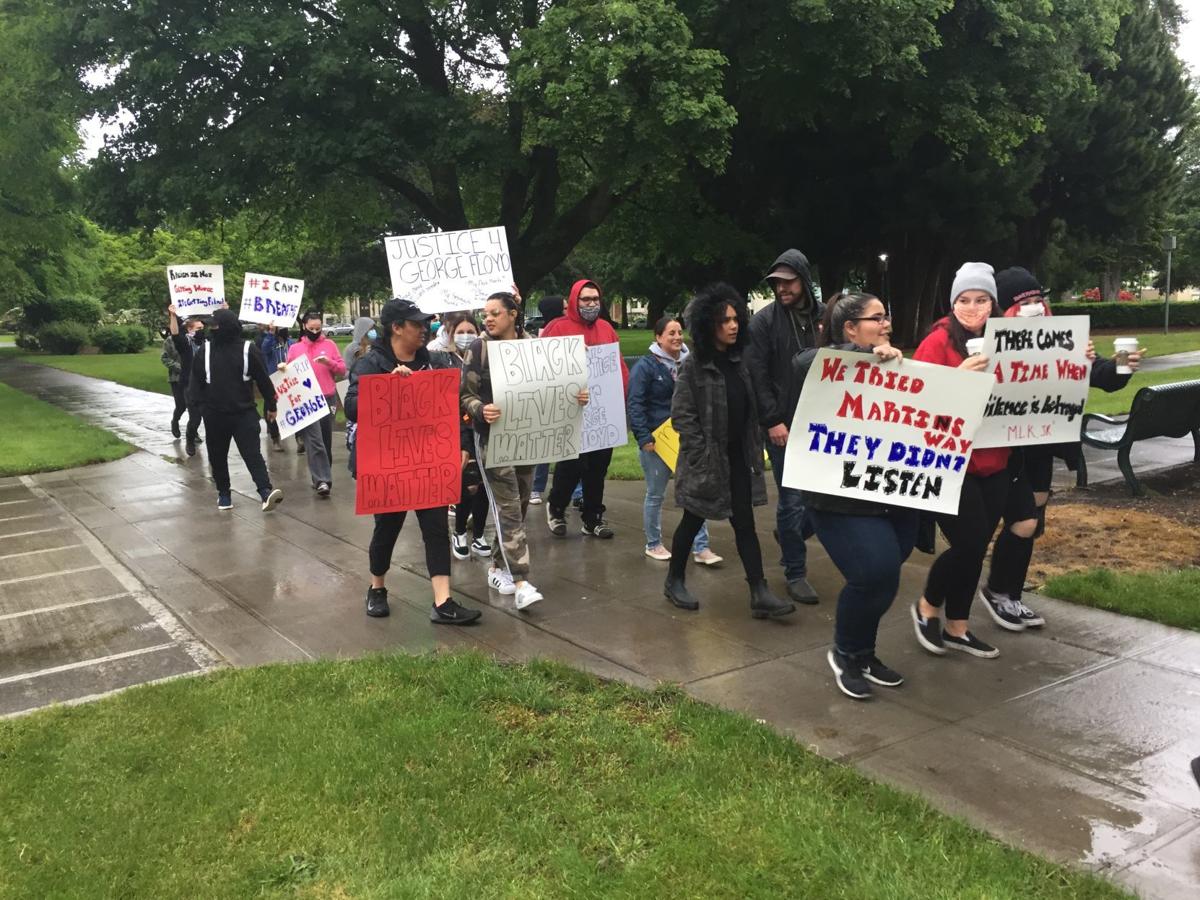 Demonstrator protesting the death of George Floyd in Minneapolis peacefully walk from the Longview Civic Circle to 15th Avenue. 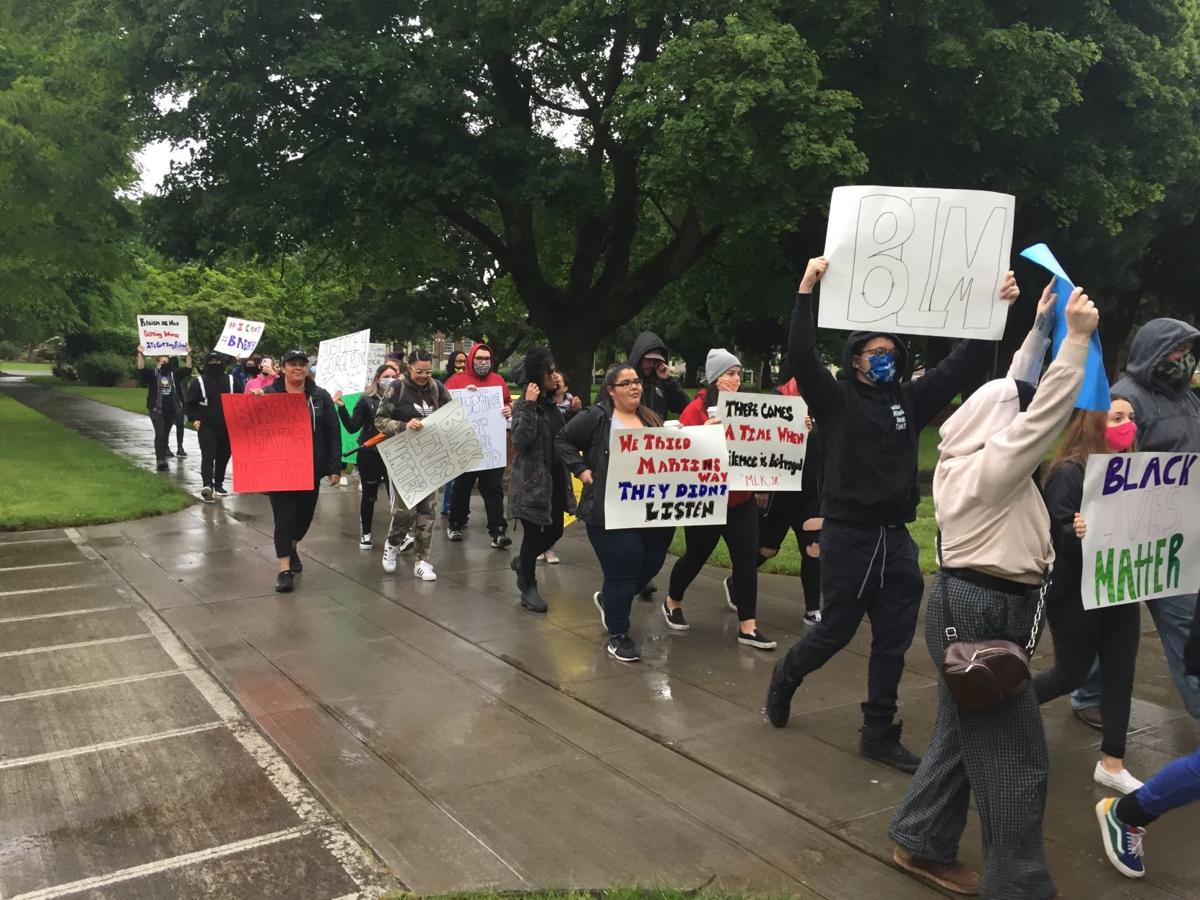 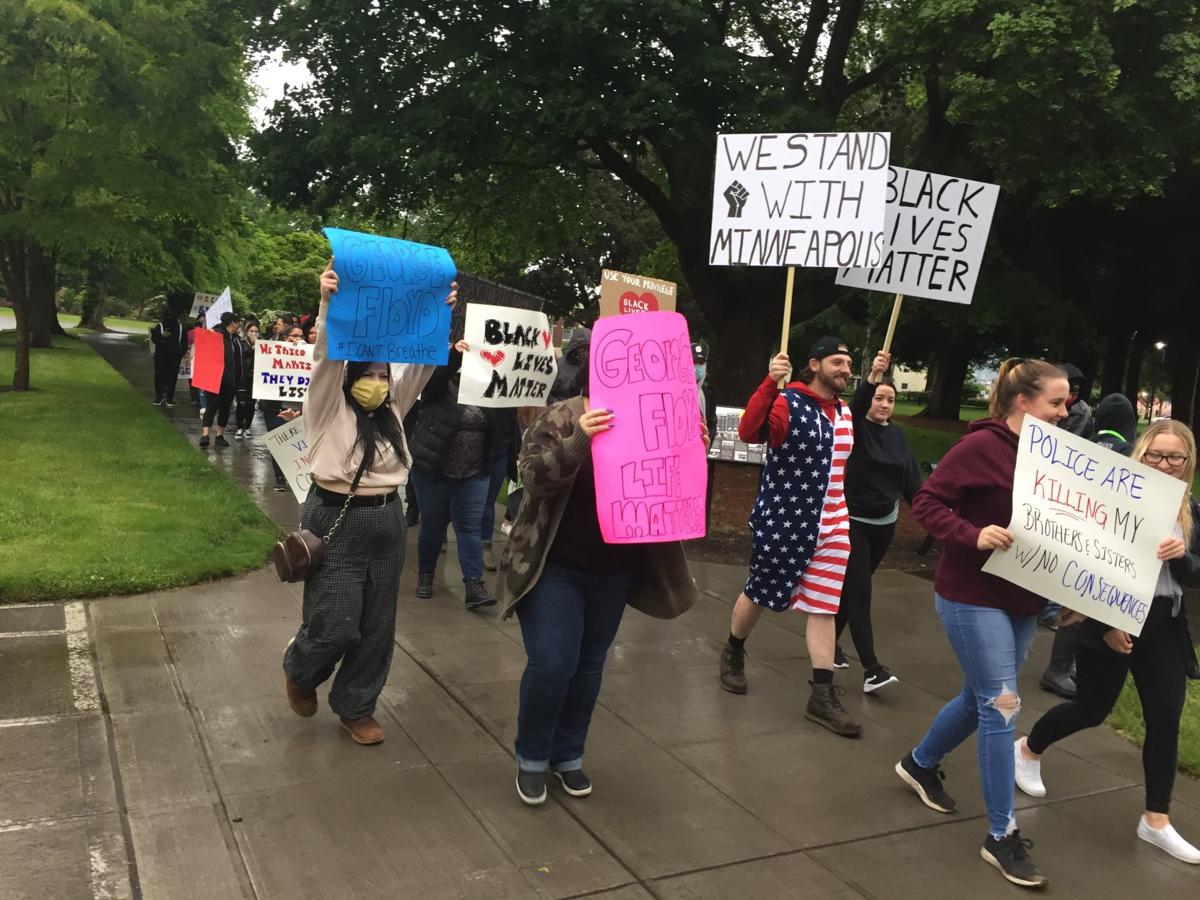 Chanting “No justice, no peace” and toting signs protesting the death of George Floyd, about 75 protesters lined 15th Avenue and the R.A. Long Park in Longview Saturday night to call for an end to discrimination and racism against African Americans and others.

The hour-long demonstration went off peacefully, in marked contrast to the riots that have broken out in many cities across the nation in response to the death of Floyd at the hands of Minneapolis police.

“We’re tired of discrimination against all people — gays, straights, blacks, whites. The community needs to join together,” said Paige Espinoza, a lifelong Longview resident who organized the rally.

Her children and grandchildren, whom she said are of mixed race, have been victims of racial profiling here by police, she said.

“An officer once pulled me over and ask, ‘Who is THAT?’ ”

She called Floyd’s death, which occurred after a police officer kneeled on his neck for nine minutes while he was on the ground handcuffed, “disgusting.”

Longview has a small African-America population, and most of the Saturday demonstrators were white. But the participants included Joy Hermon, a 40-year-old Longview resident who said she is the great-granddaughter of the late Victoria Freeman, who led the charge to desegregate Longview’s public schools decades ago.

“We’ve always had to fight” for justice, Harmon said, saying she people here still yell “n———“ at her. “And people still clutch their purses when they see me at the store.”

Protesters started their march at the Civic Center and marched to 15th Avenue, flanking both sides of the arterial near the Safeway store. Passing drivers frequently honked in support. At least in the early stages of the demonstration, no police were present.

“As long as there is no violence of property damage they are not going to see a police presence,”

He would not comment on the Floyd’s death, except to say he does not expect it to change Longview PD policies or tactics.

“We train defensive tactics three or four times a year and are constantly reviewing our policies. This it not going to change how we do business. We have not had a problem like this in Longview, so we must be doing something right,” Duscha said.

He said he had not heard about Espinoza’s complaint and could not comment.

Participants held up multiple signs. One read “I can’t breathe.” Others said “Justice for George Floyd,” “George Floyd’s Life Matters,” and “There are 2 viruses killing people: COVID and racism.”

Many of the marchers wore masks in keeping with public health recommendations to help prevent the spread of the virus.

Protester Sadie Petersen said organizers’ attempts to get word out were undermined by Facebook posts suggesting the event would be violent. It never was intended to be so, but just the posts were enough for Facebook to pull announcements down, said Petersen, a Longview native who now lives in Vancouver.

Protests, many of them violent, have broken out in at least 30 U.S. cities over the death of Floyd, an unarmed African-American who was confronted by police after he allegedly passed a fake $20 bill at a food store.

Riots have broken out in Portland and Seattle. Many cities have imposed curfews and called up National Guard troops to thwart violence and looting.

As he lined up waiting for Saturday’s demonstration to begin, Trevir Petitt said the advent of video cameras have made people more aware of police racism.

Although Petitt said he sees no evidence of local police brutality, he said it does exist around the nation and it’s important to spread the message that it must stop.

Look for this story on www.TDN.com for a video from the protest.

Demonstrator protesting the death of George Floyd in Minneapolis peacefully walk from the Longview Civic Circle to 15th Avenue.