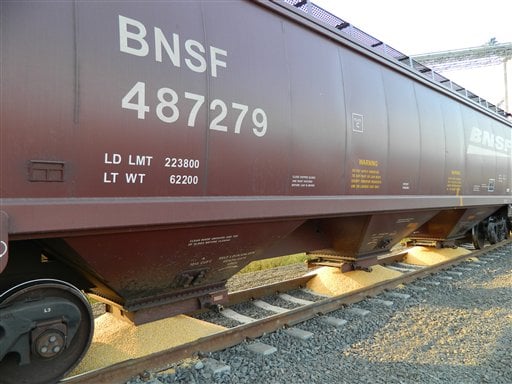 A photo provided by EGT Terminal shows grain dumped from rail cars during a union dispute at the Port of Longview in Longview on Thursday, Sept. 8.

This car, owned by a security company retained by EGT, was allegedly seized by protesters, driven into a ditch and later removed by police. 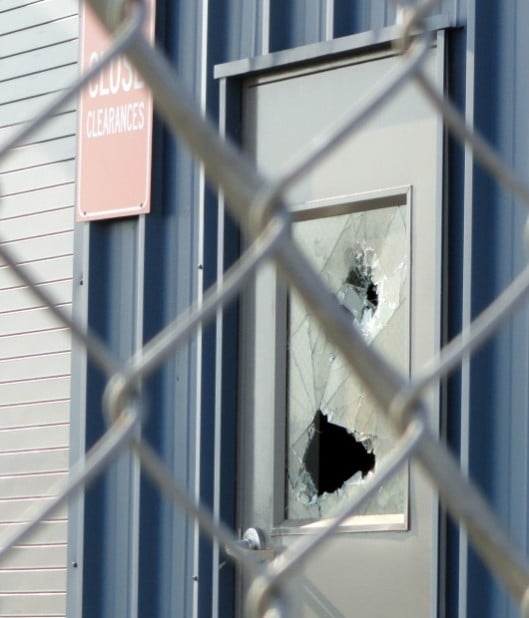 Union Longshoremen and their supporters who stormed the EGT Grain Terminal early Thursday morning shattered a window on a guard's shack and allegedly detained the guard while vandalizing company property. 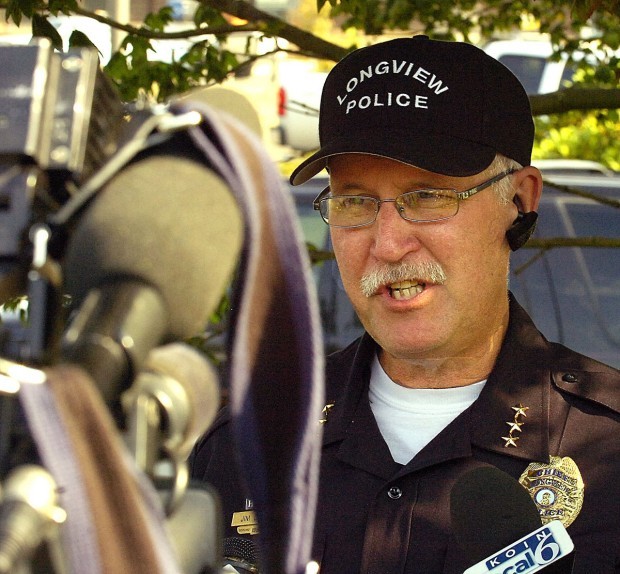 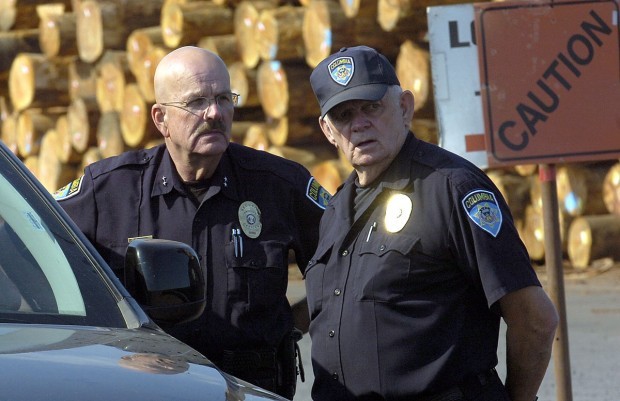 Hundreds of longshoremen and their supporters stormed the EGT grain terminal at the Port of Longview early Thursday morning, dumping grain from train cars, smashing windows on a guard shack and leaving six security guards feeling trapped and fearing for their safety, the Longview Police Department said.

The protesters, who rushed the $200 million terminal around 4:30 a.m., yanked a security guard from his car and drove the vehicle into a ditch, authorities said. They also cut the brake lines of train cars, according to Longview Police Chief Jim Duscha. Police estimated 400 people were involved.

Initial law enforcement reports suggested the protesters held the security guards hostage. Investigators, however, later learned that the six guards inside feared they would be injured or killed if they stepped into crowd of protesters roaring past a guard shack, Duscha said. He said the guards were unable to leave the area for about two hours.

By the time law enforcement arrived en force, the protesters had scattered, he said.

"They all left before we could mobilize some of our troops," Duscha said.

No one was injured and no one involved in Thursday morning's events has yet been arrested.

Dan Coffman, president of Longview-based Local 21 of the International Longshore and Warehouse Union, said he doesn't know what happened at the terminal Thursday morning and couldn't confirm any of the local's 200 members was involved. He criticized Duscha for making early, exaggerated claims against union longshoremen.

"It's totally ridiculous when you've got a police chief in this community that's accusing us of holding hostages. That is a blatant, total, all-out lie," Coffman said.

Authorities, who called in scores of officers, are bracing for more union activity. Police have arranged for backup with multiple law enforcement agencies in the region in preparation for any future conflict, and they have appealed to the union to de-escalate the situation.

"I think it's to the point that things could get very violent and hostile," Duscha said, adding that police are "hoping for the best but expecting the worst."

"My hope would be that longshoremen would go back to peaceful protests and have a level head and let this resolve in federal court this spring. That would be the best for everybody involved," the chief added.

The ILWU believes it has the right to work at the facility, both by tradition and under a lease agreement that EGT signed with the Port of Longview. EGT officials have instead hired workers from the Union of Operating Engineers Local 701, based in Oregon. The matter is expected to be settled in federal court next year.

EGT is pushing to open the terminal soon in preparation for the fall harvest. The company plans to haul millions of tons of grain from the Midwest and export to China and other Asian markets.

Just before the morning raid, a Longview police sergeant was patrolling the area when he spotted a horde of cars rolling toward the terminal, Duscha said. A man carrying a baseball bat stepped out of a truck near the terminal and declared to the sergeant, "Today is the day law enforcement gets theirs!"

Duscha said the protester was grabbed and pulled back into a truck by two of his fellow protesters.

Many of the protesters carried ILWU signs and sported union bumper stickers on their vehicles, police said.

Thursday morning's incident was a dramatic escalation of dispute that has festered all summer. Just 12 hours earlier, several hundred ILWU protestors stopped a 107-car grain train for about four hours late Wednesday afternoon. The mile-long train, the first-ever shipment to the terminal, passed into the terminal when union protesters cleared the tracks after being confronted by police wearing riot gear and carrying tear gas and rifles loaded with rubber bullets.

During Wednesday's protest, union members threw rocks at police and sprayed a few officers with mace, Duscha said. He also noted that the protesters had attached picket signs to baseball bats and ax handles. Nineteen protesters were arrested Wednesday, some after scuffling with police.

"In my 31 years in law enforcement, I've never seen a labor dispute like this," Duscha said Thursday morning.

"This was not like the peaceful protests we've seen in the past. The protesters today were loud, aggressive and assaulted my officers," Nelson said in a prepared statement.

"I have been meeting with local union leadership and business representatives for two months now. I was always assured that things would not get violent towards our police officers. I guess the protesters from out of town didn't get that message," Nelson said. " ... There are people outside of our community that are pulling the strings here, and our neighbors are the ones getting hurt."

By mid-morning Thursday, the protesters had dispersed. None were at the terminal, which was barricaded by a group of police cars. The only visible sign that the union supporters had been at the terminal were a few ILWU picket signs tossed into the dirt and mounds of corn spilled on the tracks beneath nearly every grain car that had come in Wednesday. A handful of vehicles were outside the longshore union hall on 14th Avenue in Longview Thursday afternoon, but the doors were locked to outsiders.

Law enforcement has closed off all pickets on East Mill Road outside the terminal. In past weeks, the union and port had agreed to limit pickets to 16 people at a time on the condition they broke no laws, Nelson said.

Six law enforcement agencies set up a command post at an old square dance hall on Industrial Way not far from the grain terminal. Duscha said 50 officers were on duty in the area and the Cowlitz County Sheriff's Office, which was in charge of the operation, was ready to call in more from agencies as far away as Oregon.

"We're very tense," Duscha said. "The demeanor of the protesters has come out. They were aggressive toward law enforcement."

Duscha said investigators were inside the terminal assessing the damage Thursday morning.

During a Thursday afternoon press conference, Duscha said there had been no law enforcement presence in the middle of the night following Wednesday's protests. Government budgets are tight, he said, and it didn't seem practical to station officers at the port overnight.

"Today, the ILWU took its criminal activity against EGT to an appalling level, including engaging in assault and significant property destruction. This type of violent attack at the export terminal has been condemned by a federal court, and we fully support prosecution of this criminal behavior to the fullest extent under the law. The ILWU is thumbing its nose at the laws of the United States and our legal system," Clarke said in a written statement.

Work is at a standstill at some Northwest seaports, including Seattle, as a long-simmering labor dispute turned violent Thursday morning.

Images from the ongoing labor dispute confrontations between ILWU members and authorities.

VANCOUVER — Union protesters have blocked a train for a second time, preventing the shipment from reaching a grain terminal in Longview.

Two Cowlitz County commissioners said they back the longshoremen's union in its picket of the EGT grain terminal Tuesday, and one has even vis…

The Port of Longview will continue to allow eight longshore union picketers outside East Mill Road near the $200 million EGT grain terminal, b…

A photo provided by EGT Terminal shows grain dumped from rail cars during a union dispute at the Port of Longview in Longview on Thursday, Sept. 8.

This car, owned by a security company retained by EGT, was allegedly seized by protesters, driven into a ditch and later removed by police.

Union Longshoremen and their supporters who stormed the EGT Grain Terminal early Thursday morning shattered a window on a guard's shack and allegedly detained the guard while vandalizing company property.