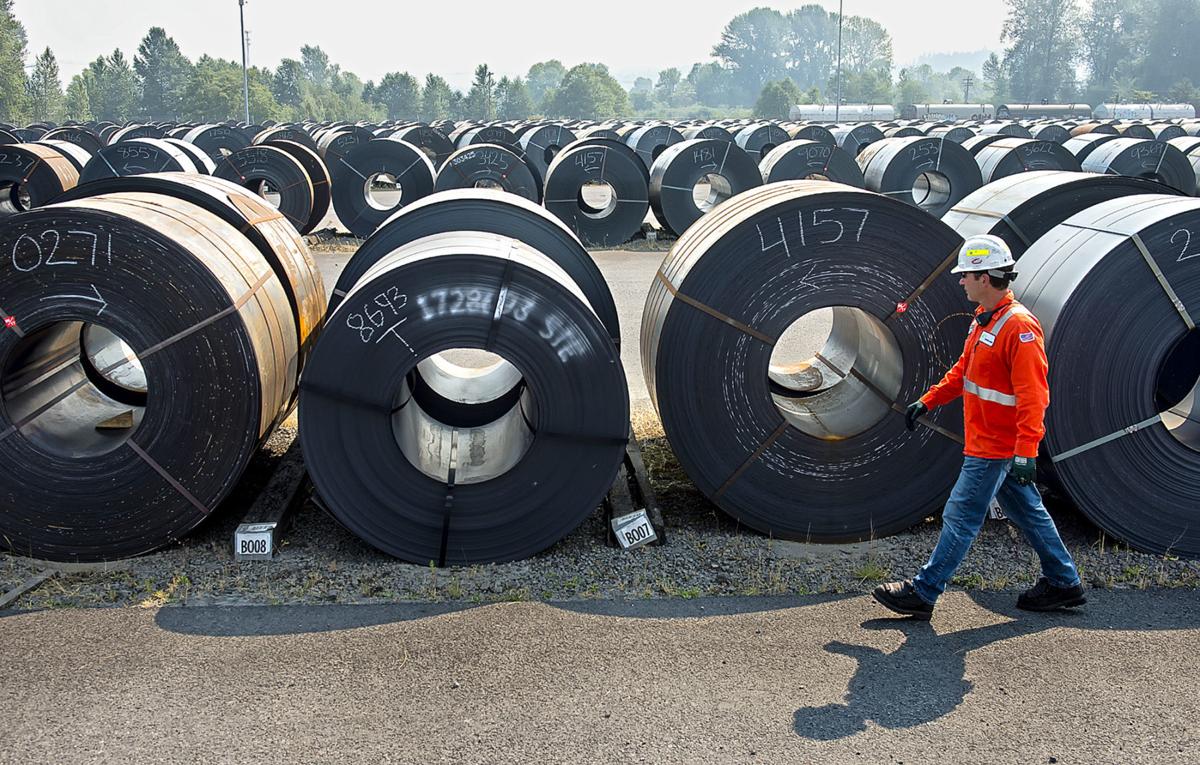 An aerial photo shows the rows upon rows of hot rolled coils of steel stored in the “hot band” yard at the Steelscape plant off Kalama River Road.

Last year, 960,000 metric tons of steel passed through docks on the Lower Columbia River — enough steel to build more than 800,000 cars. At least 870 jobs are directly tied to steel imports at the Ports of Kalama and Vancouver, so when President Trump starts talking about slapping tariffs on steel, Southwest Washington ports get understandably uneasy.

While the Trump administration delayed any decision on steel tariffs for several months, local ports and companies who rely on steel are quietly preparing for a dramatic shift in how they do business. They worry tariffs could increase steel prices, which could at worst, undercut their business models and potentially spur reduced production and layoffs. Talk of tariffs has divided the manufacturing industry itself, too. Many domestic steel manufacturers cheer the tariffs, but companies who rely on foreign steel, such as Steelscape, are wary of their effects.

Steelscape is particularly concerned that tariffs could impact its facility at the Port of Kalama, where it imports semi-finished steel from Australia and Japan to produce building materials.

“We don’t know what the outcome is going to be. Obviously to continue to be a viable business, we’d have to look at everything,” said Sara Deukmejian, president of Steelscape, which owned by Australia-based Bluescope and Japan-based Nippon Steel.

“We couldn’t continue with our existing supply chain … we would also have to reduce our volume. What does that mean to our manufacturing base? We don’t know,” Deukmejian said.

Beyond steel, tariffs have the potential to impact another vital industry on the Columbia River too. It's possible tariffs could trigger steel-exporting countries to retaliate by imposing counter tariffs on U.S. agricultural products, such as grain and wheat, which play an even bigger role role at the Port of Kalama and Port of Longview. So it makes sense that southwestern Washington ports are closely watching the Trump administration’s next move.

On the campaign trail, Trump vowed to help American factory workers by imposing tariffs on steel. He ordered the Department of Commerce in April to open an investigation into the matter under a little-known piece of the Trade Expansion Act of 1962, Section 232, which enables the executive branch to restrict imports for products tied to national security.

Proponents argue the military needs to ensure it has enough high-quality domestic steel to make everything from helmets to tankers. But critics question the national security claims behind Trump’s investigation, because the American military isn’t critically dependent on steel imports. Only about 3 percent of steel shipments go to homeland security or national defense, according to the American Iron and Steel Institute.

The administration delayed any decision on the matter until the fall, presumably after the it tackles tax reform and health care.

Those who support the trade barriers say it’s the only way to provide relief to American steel manufacturers who are suffering under the weight of cheap foreign steel, particularly from the millions of tons of steel flooding in from China. Imports now make up 30 percent of the American steel market. Meanwhile, the steel industry has shuttered plants and shed thousands of jobs over the last two decades. Steel manufactures say that targeted anti-dumping policies are not doing enough to fight Chinese competition.

But opponents say broad tariffs will spark a new trade war that will extend beyond the steel industry, and they worry it could spur layoffs at American companies that rely on imported steel.

At Steelscape and its subsidiaries, steel imports support about 800 jobs in the U.S., including 270 jobs at the Port of Kalama. The company imports hot rolled steel coils, which are processed into cold-rolled, flat steel for building materials such as siding and roofing.

Although the company gets a small amount of steel from domestic sources, imports are the bedrock of its business model. Steelscape says it can save about $60 to $100 per a ton of steel by importing it through the Columbia River docks rather than shipping it in over the Rocky Mountain.

“We’re a domestic steel manufacturer, but our production supply chain and the way we’ve been built as a business is such that we rely on imported, semi-finished steel,” Deukmejian. said. “We’re on the Columbia River. Everything comes in via boat. We don’t have rail access.”

Switching its supply chain to domestic sources is possible but problematic, Deukmejian said.

That’s because there are only two to three suppliers of hot-rolled steel on the West Coast and those companies are focused on supplying their own down-stream needs and customers, according to Steelscape.

Not surprisingly then, Steelscape didn’t shift domestic sources last year when the Department of Commerce imposed a 30 percent dumping duty on hot-rolled steel from Australia. Instead, Steelscape just replaced Australian imports with steel from other countries.

Yet the anti-dumping duties were a blow to the Port of Kalama, too. In 2016, Steelscape imported 308,000 metric tons of steel through the port, a 15 percent decrease from the previous year. The port relies on the steel import activity for 20 percent of its annual revenue.

“Increased duties that lower steel imports to our tenant cut our revenue and limit our job creation capabilities,” Mark Wilson, executive director of Port of Kalama wrote in a letter to the Department of Commerce.

Imposing tariffs could discourage foreign companies from opening new factories or making direct investments in the U.S., Wilson said in an interview.

The impacts of potential tariffs are magnified at the Port of Vancouver, where steel imports support 600 jobs and account for 36 percent of the port’s annual revenue. As the second biggest importer of steel on the West Coast, Port of Vancouver brought in 621,000 metric tons of foreign steel last year. Most of Vancouver’s steel imports come from Russia and Mexico, with some from South Korea and Japan.

“The main concern around a lot of this talk of tariffs (has to do with) China, and we don’t import steel from China, it comes from these other countries,” that could be unfairly targeted by broad tariffs, said Ryan Hart, Port of Vancouver spokesman.

Ports of Vancouver and Kalama, as well as our Washington congress members have all lobbied the Department of Commerce against the tariffs. In May, Steelscape’s former president, John Cross, traveled to Washington D.C. to testify on the Section 232 investigation with the support of Washington state Rep. Jaime Herrera Beutler and Calif. State Rep. Pete Aguilar.

Both Herrera Beutler and Cross asked the Department of Commerce for special considerations for American manufacturers like Steelscape, which rely on imported steel.

“The department’s investigation is focused on ‘national security,’ and while I’m all for stemming any potential security concern, I’m urging Commerce to proceed with caution,” Herrera Beutler said in a statement to The Daily News. “It must ensure it’s guarding against actions that could result in crippling retaliation by strategic trading partners or unaffordable commodity prices that would devastate families in Southwest Washington.”

Some observers worry that Trump could set a precedent for other countries to use the premise of national security to slap tariffs on other common consumer products, such as dairy or grain.

“If we go down this road then … countries looking to protect themselves from U.S. agriculture could look at this and say, ‘Oh we can do the same things,’” said Ben Conner, director of policy at the U.S. Wheat Associates. For example, countries could argue grain is needed for bread to feed armies, he said. Although the U.S. could challenge retaliatory tariffs to the World Trade Organization, the potential trade war could inflict a lot of damage in the meantime, Conner said.

Several countries who consume the most U.S. wheat also are among the top exporters of steel, too, Conner noted. Washington state exports about 85 to 90 percent of its grain abroad, so potential tariffs could grain industries here hard.

“The Northwest … more than any other region, is dependent on exports, so disturbance of trade always come back and hurt the farmers who export wheat to a lot of the steel-exporting countries,” Conner said.

“There’s a ‘David and Goliath’ nature to this,” said Scott Paul, president of the Alliance for American Manufacturing.

While there are already trade barriers against steel from China and other countries, those approaches haven’t gone far enough to protect American manufacturers, Paul said.

“That approach has provided a little bit of breathing space but it hasn’t brought down China’s overcapacity,” Paul said.

Paul argued while some businesses would have to adjust their business models, ultimately the American steel industry would benefit from strong tariffs.

American steel mills are “operating at 70 percent of capacity some mills are idled. If there is more demand domestically they would bring back workers,” Paul said.

But steel manufacturers and ports who depend on imports aren’t holding their breath for job growth. When Bush implemented strict tariffs in 2002, researchers estimated it cost 200,000 American jobs.

Many American companies are ordering more steel now before the tariffs take effect, too. Steel imports soared by 21.7 percent in the seven months of this year, according to the American Iron and Steel Institute. At the Port of Vancouver, imports shot up 33 percent in the first six months of the year compared to the same time last year. (Port of Kalama’s steel imports rose only slightly.)

Secretary of Commerce Wilbur Ross has until January 2018 to make a recommendation to Trump on whether to impose tariffs. Many companies are betting the tariffs will take hold, but they aren’t sure how big they will be.

“We are looking at all kinds of options to make sure that we have enough steel so that we can reliably service our customers ... and that we can continue to be a viable American steel producer that supports our 400 employees,” Deukmejian said.

All Washington counties in Phase 3 on May 18, state on track for full re-opening by June 30

All Washington counties in Phase 3 on May 18, state on track for full re-opening by June 30

An aerial photo shows the rows upon rows of hot rolled coils of steel stored in the “hot band” yard at the Steelscape plant off Kalama River Road.