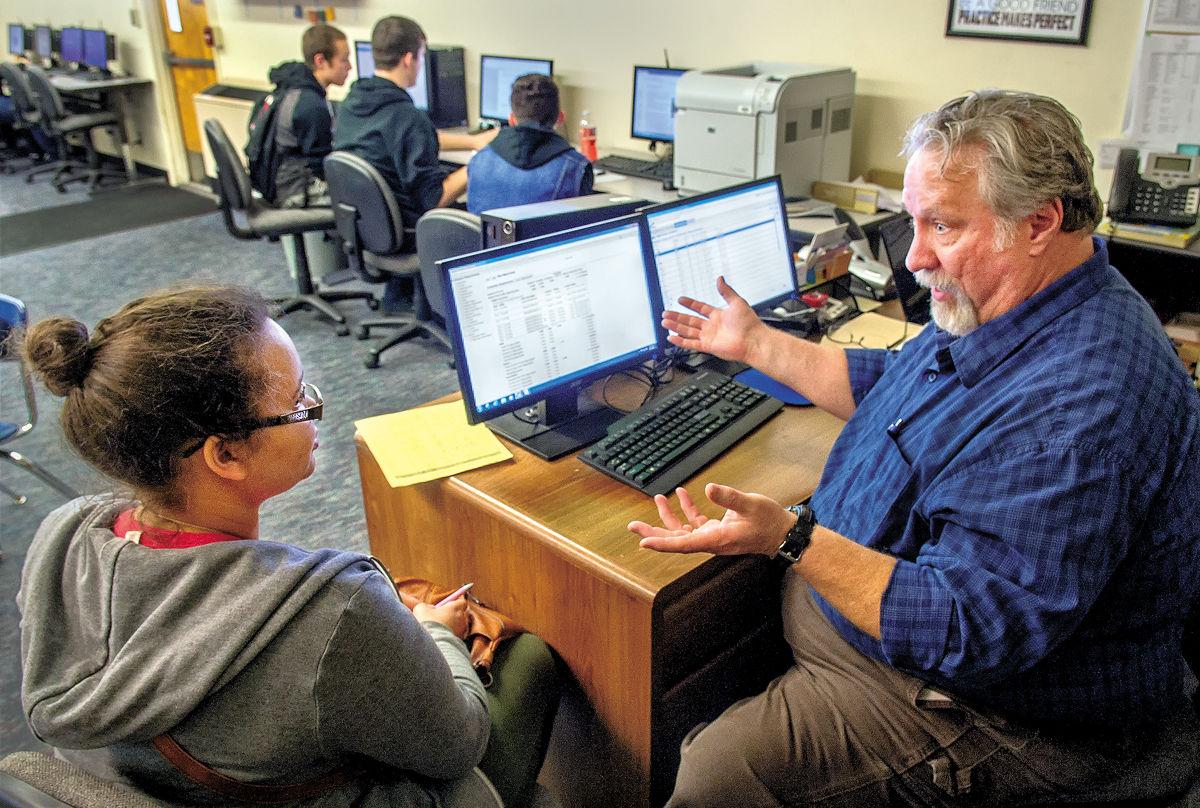 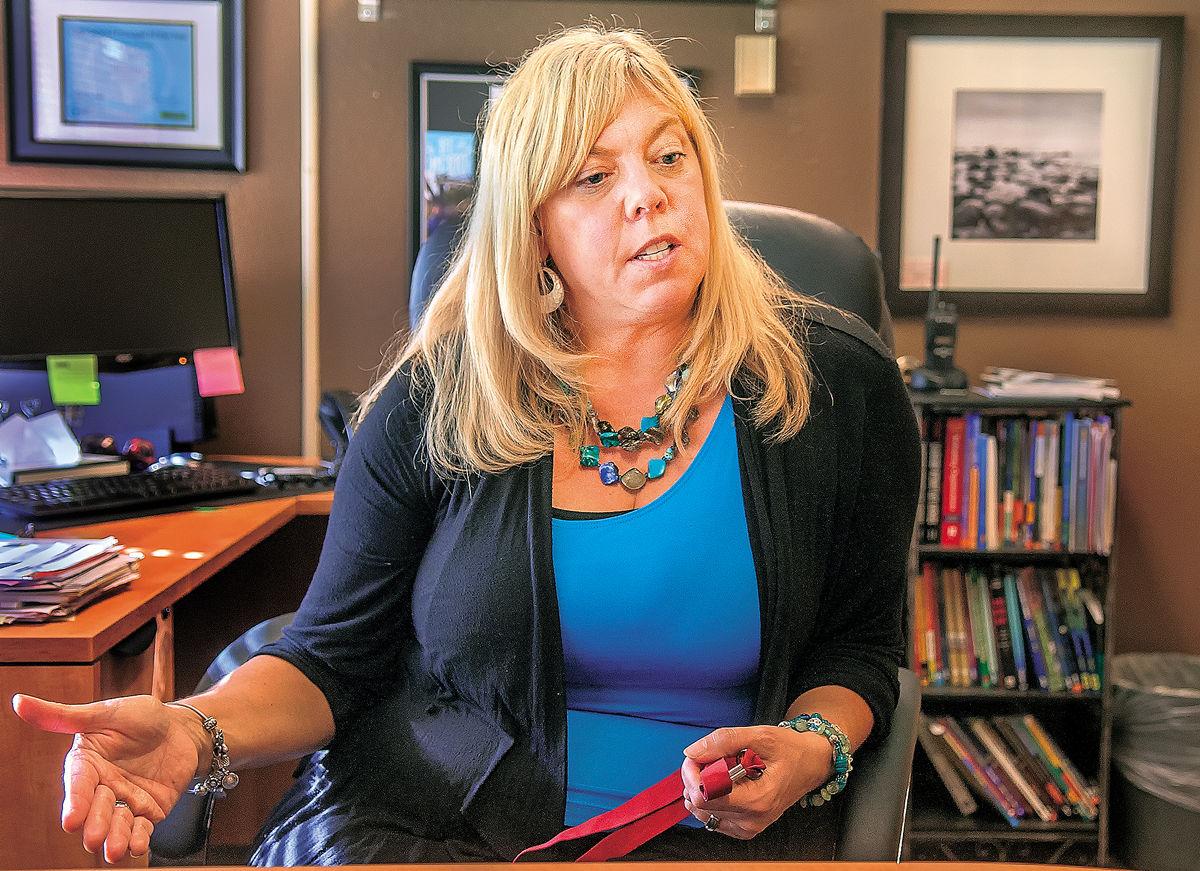 On Track High School Principal Jill Diehl has restructured the high school and brought in more students as a result.

Sophomore Shelby Worth said if it weren’t for Longview’s alternative high school, she would have been a dropout.

She went from being a straight A student in middle school to a straight F in high school after only a semester at Mark Morris High School.

Shelby, 15, made the switch to On Track High School last year and hopes to graduate early.

“I didn’t like Mark Morris and the way kids treated other people there,” she said. “(Here), you decide your pace. The teachers interact more with students. They care more about your education.”

Students like Shelby are becoming more common, as enrollment in local alternative high schools swells. The schools combine online and project-based classes with flexible scheduling and small classrooms, attracting students who want non-traditional schooling as well as those at risk of dropping out.

“It used to be that if you went to the alternative high school you had drug issues, or you had problem with the law, or you just couldn’t graduate from the normal school,” said Dan Uhlenkott principal at Woodland’s TEAM High School for 10 years.

“I think people are coming to accept that our world is changing. We can’t educate kids like they did in the 1950s. It doesn’t matter where you get your education. It matters that you got your education,” he said.

Longview’s On Track opened in 2009 to help students make up missing credits. It transitioned last year to a full-on high school and has grown 42 percent since then, even while total district enrollment has shrunk sharply. On Track, located in the Harding Building next to R.A. Long High School, now enrolls 202 students, or nearly 10 percent of the district’s high school-age population.

Woodland School District opened TEAM in 1997. It grew 6 percent in the past six years, slower than the district’s 23 percent enrollment growth in that period. However, the district’s other alternative school, the online-only Lewis River Academy, has doubled enrollment — to 67 — since it opened four years ago. It serves all grades. Together, they educate 154 students, or 7 percent of the Woodland School District.

All three of Kelso’s alternative programs have been operating at full capacity for the past few years, though the district has no immediate plans for expanding them. Together, they educate 89 students.

On Tuesday, Shelby sat at a table with classmate Samantha Berglund. Other classmates worked quietly on computers. A newly-hired career and college advisor sat at a table in the corner waiting to lend a hand. Classes range from about six to 15 students.

All six alternative schools in Cowlitz County operate with the same basic format: students learn with mostly online courses, occasionally do projects and can get help from teachers when necessary. Students also can do all work online.

Samantha, 15, is in her first year at On Track. She said she left Mark Morris because she struggles with social anxiety. She’d “grasp at any excuse to miss school” and missed two months of school in her first semester at Mark Morris.

“I really like this school,” she said. “I’m going to be (attending) as much as I can. This is the first time I’ve really liked school since kindergarten.”

Shelby said an alternative education isn’t a good fit for everyone.

“It depends on your set of goals,” she said. “If you’re actually wanting to graduate and are willing to put the time and effort in, then” it’s a good fit.

Jill Diehl, principal of On Track, said there have always been a small group of students for whom traditional schooling doesn’t work. Alternative schools are a way to reach them, but they also require a lot of time, effort and money to create. That may explain why there are only six in Cowlitz County, Diehl said. (There are 262 alternative schools in Washington.)

Woodland graduation rates, though, have fallen 8 percentage points, to 68 percent, since 2002. Uhlenkott said that may have been because of multiple factors, including the recent recession. TEAM, he said, is still reaching students who would have otherwise dropped out.

“There’s absolutely no question about it,” he said. “We deal with a lot of high-risk students as well as other students. This is their last shot, their last hope. If they don’t make it there, they drop out, and they’re done.”

Graduation rates at local alternative schools hover around 30 percent, but the number may be misleadingly low because many students take longer than five years to graduate, and thus are considered dropouts to the state. Former Loowit Principal Mary Beth Tack says alternative schools clearly serve a need.

“I think we’re learning as educators how to interact with kids with different learning standards, different needs, different challenges and developing different options for them to choose,” Tack said. “We know that one size doesn’t fit all.”

On Track High School Principal Jill Diehl has restructured the high school and brought in more students as a result.