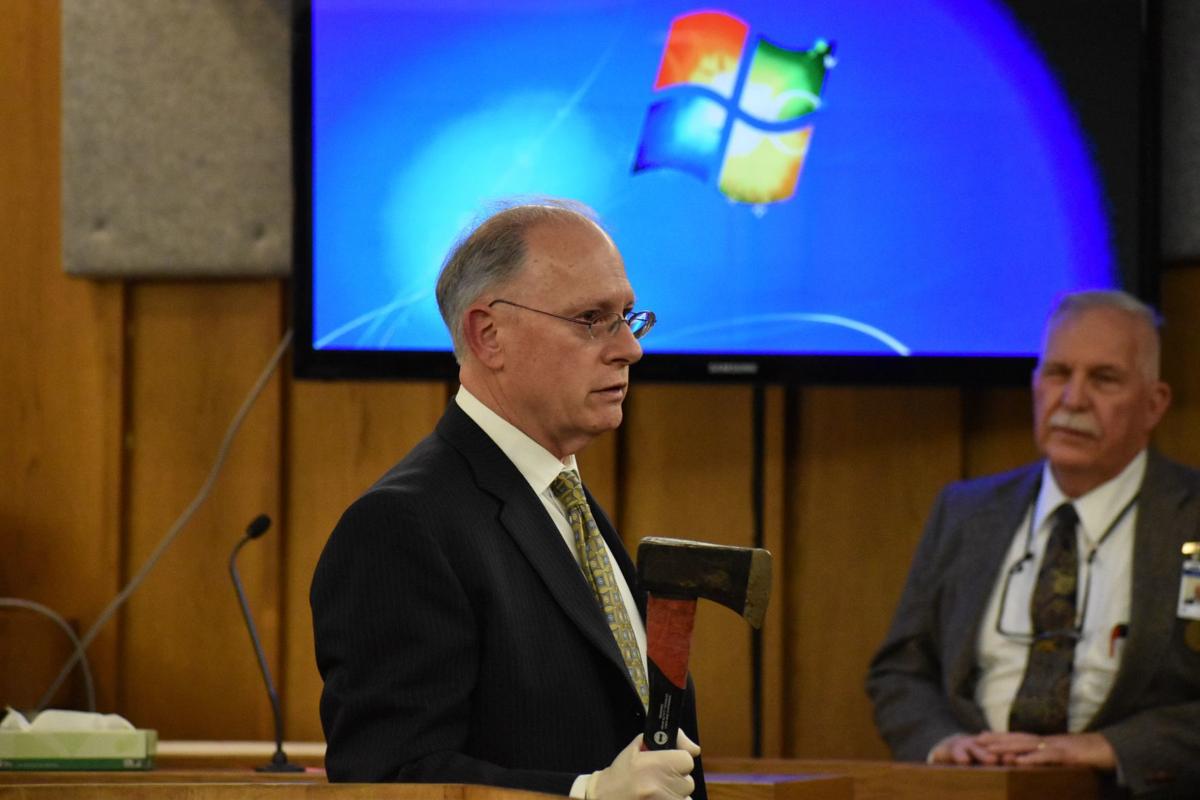 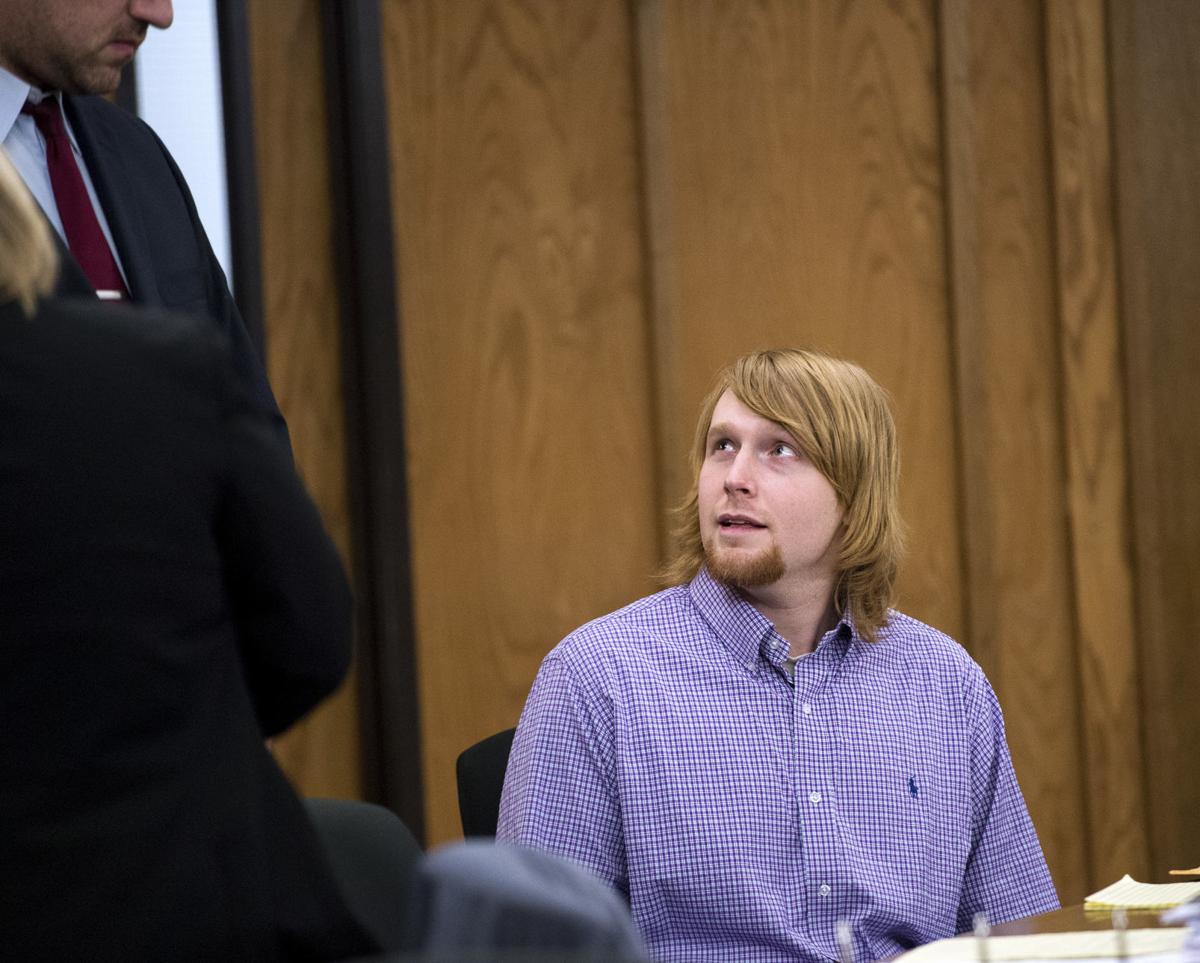 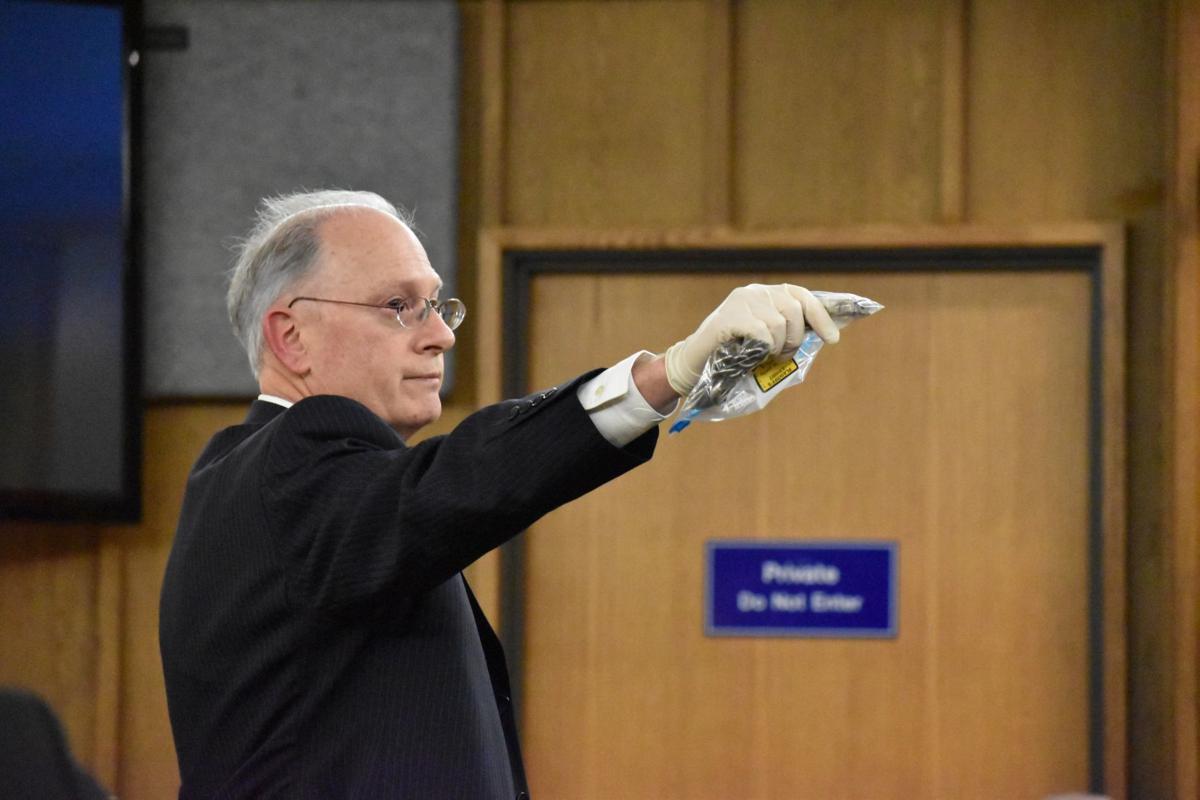 Prosecuting attorney Tom Ladouceur holds up the "smiley," consisting of a small lock attached to about one foot of iron chains, that police recovered from Robert Lorenzo Diaz III.

Attorneys sparred over claims of jealous rage and self-defense in the last day of a murder trial regarding the killing of Robert Lorenzo Diaz III last May.

Ryan Scott Adams, 27, is accused of killing Diaz, 32, by repeatedly hitting him in the head with a hatchet on May 11. Adams is from Florida, and Diaz is originally from Massachusetts. Prosecutors and Adams’ defense gave closing arguments in the case Thursday night, which began the week before. Adams, who was present but did not testify, is charged with first-degree murder. The jury will begin deliberations Friday morning.

Both sides agreed that the case is not a “whodunit.” But Adams’ defense said that his hatchet blows, which severely injured Diaz on May 11 and led to his death two days later, were in self-defense.

Ladouceur painted the slaying as an enraged retaliation over the decision by Shannon Miosek, Adams’ travelling partner, to leave him to travel with Diaz and his companions. Adams and Miosek came to Longview from Florida in late April. On May 11, the same day Adams accepted a job locally, he, Miosek and Diaz traveled back to the camp Adams and Miosek were staying at. A conflict between the two men left Diaz with massive head wounds from Adams’ hatchet.

Ladouceur referenced statements Adams made to Longview officers about the slaying, such as: “I wanted him to quit talking s—-.”

Adams asked Diaz to move around him while at the camp, according to police interviews, which Diaz did. In doing so, Adams “created an opportunity to blindside Mr. Diaz,” Ladouceur said, and hit Diaz from behind.

After Diaz went down, Miosek testified earlier in trial, Adams continued hitting him with the hatchet.

“I watched myself swing, and I’m telling myself not to swing, but I won’t stop,” he said in a police recording played earlier for the jury.

Throughout his closing argument, Ladouceur hammered on what Miosek said Adams told her after he hit Diaz with the hatchet: “Look what you made me do.”

Defense attorney Patricia Fassett began by loudly banging the podium three times in rapid succession: “It was over, that quick,” she said, referring to the hatchet blows.

Adams was angry, she agreed, but terrified as well. Diaz told Adams he put people in the hospital with his “smiley,” an improvised weapon made from a chain and lock, and that he wasn’t afraid to go back to prison, Miosek said.

Ladouceur himself held aloft both the hatchet Adams allegedly used to kill Diaz and the “smiley” officers reported finding on Diaz. With the smiley in hand, Ladouceur said the lock was only about the size of a fun-sized “Snickers bar.”

“A pen or pencil could do more damage than that,” he said.Adams warned Diaz twice to back off, but Diaz wouldn’t, Fassett said. Face-to-face with Diaz, Fassett said Adams sprung to his own defense.

“Every living creature understands self-preservation,” Fassett said. “Instincts take over. We do what we need to do.”

Adams was also concerned throughout the day that Diaz was trying to get Miosek drunk, Fassett said.

“(Adams) doesn’t want her leaving when she’s drunk, but he doesn’t stop her,” Fassett said. “They’re travelers. They’re nomads. They move on.”

She also referenced Adams’ call to 911 after the attack.

“(Adams) identified himself on the call. A guy from Florida, no ties to the community. A traveler. Could have effectively just taken off, disappeared. But ... (Adams) stayed there, waited for police to arrive. And the first thing he said to them was ‘we need to get this guy help.’”

In response, Ladouceur pointed out that Adams lied to dispatch when he told them “someone” else attacked Diaz. And he questioned if Adams was really concerned about Diaz’ well-being while referring to him as an “a—hole” during police interviews.

Fassett said elements of the case didn’t add up, such as Miosek’s location and visibility during the attack and her testimony that Adams hit Diaz on the back with the blade of the hatchet. The latter, Fassett said, was disproved by a medical examiner. She also questioned why Adams’ clothing wasn’t more bloodstained than Miosek’s testimony indicated.

Prosecuting attorney Tom Ladouceur holds up the "smiley," consisting of a small lock attached to about one foot of iron chains, that police recovered from Robert Lorenzo Diaz III.