Kelso’s Indian Education Program shares the qualities of Hermia, a pint-sized but spirited character featured in Shakespeare’s “A Midsummer Night’s Dream”: “Though she be but little, she is fierce.”

The core of the program is a small classroom on the first level of Wallace Elementary School. It protects a wealth of history. A glass display case full of traditional Native American objects greets visitors at the front entrance. Several bookshelves laden with children’s and educational books about Native American culture sit against a wall adorned with dream catchers. In the back of the classroom a map of the United States is stabbed with push pins locating which tribes students in the program have roots.

Shelley Hamrick, the program’s coordinator since 1997, sees the classroom as the source of the program’s strength and uniqueness. When the district formed its diversity committee around 1995, it had a broad mission that the room came to physically exemplify.

“(The district wanted) to make kids feel connected and included,” she said. “And then they saw everything that we have.”

Hamrick smiles as she sweeps her hand through the air to point to dozens of artifacts in the room, donated over time by community families. The district decided to give the program its permanent home at Wallace in 1997, when it moved from a portable classroom to a room inside the school.

Native American cultural education is having a big year in Kelso and the state. Kelso’s annual Pow Wow will celebrate its 30th anniversary in May. In March, Washington’s House of Representatives formalized the Friday after Thanksgiving as Native American Heritage Day.

Kelso created its program in the 1970s in response to the federal Indian Education Act, adopted in 1972 to restore and preserve cultural traditions weakened when many Native American children were sent to boarding schools in the late 19th and early 20th centuries.

“It was kind of like (the government, schools and tribes) wanted to bring that (knowledge) back to the people,” Hamrick said of Kelso’s participation in the Indian Education Act.

Few other districts in their area have built up their Indian Education programs as thoroughly as has Kelso. When Hamrick began as a tutor in 1989, the program had about 240 students. The program has 400 students this year. Hamrick said the district now includes students with ancestral links to 63 tribes. The program’s success, Hamrick said, has been a result of a close working relationship between her and district administrators that Hamrick said fosters a sense of inclusion for the district’s Native students.

Hamrick said the program’s educational and cultural missions reinforce each other.

“Many students who were really, really struggling in school, they’d get some extra help in school, and they’d start valuing their culture, because they (didn’t) have that connection to the reservation anymore or maybe they didn’t at all,” she said.

Lory Evans brings her two grandchildren to Tuesday’s culture class. She said it has helped her and her children feel more connected to their Native American heritage.

“I thought they should have some of the culture,” Evans said. “I never got any (cultural education) when I grew up so I wanted them to have some.”

Her granddaughter Kaydince Evans talked excitedly of the free “Ratatouille” cooking book she got from the program. Her grandson Quincy Evans picked “Buffalo Before Breakfast,” a Magic Tree House series novel. He said it only took him a few days to read. Both books come from First Book Grants, which donated more than 2,200 books in the last five years.

She said she thinks Native Americans learn differently. Like herself, she said her students are more oral learners. LaMere said that’s why she tries to teach her culture class through demonstration and activity.

“I think that’s our culture,” she said. “Just like our stories -- they’re passed down from generation to generation (through speech).”

Program tutor and parent Elizabeth Jones said the culture class has helped keep her and her children connected to her tribe, the Lummi of western Washington.

“It’s so hands-on, they don’t even realize they’re (learning),” Jones said. “They don’t understand that while they’re having fun, they’re getting the education part of it, too.”

LaMere said her culture class is most effective for a simple reason: it’s fun.

LaMere’s class involves plenty of it. The room boomed Tuesday night with the guttural voice of a raw hide drum, beaten as LaMere sang a coastal Native American song to the class. Students circled the display case, rowing along to her song with drum sticks.

LaMere said the program reaches students at a level beyond the cultural and educational.

“I think it touches on a spiritual level as well,” she said.

Lauren Kronebusch covers education and the city of Kalama for The Daily News. Reach her at 360-577-2532 or lkronebusch@tdn.com. 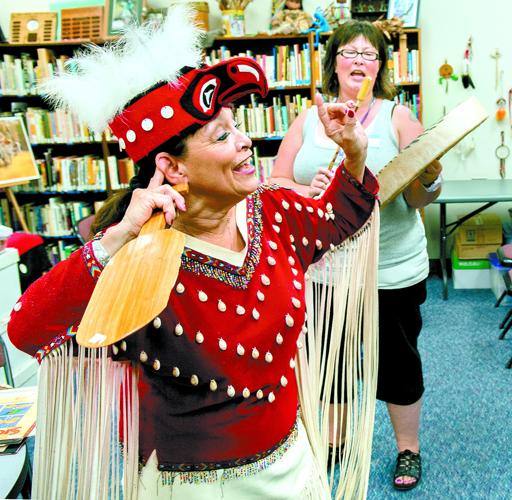 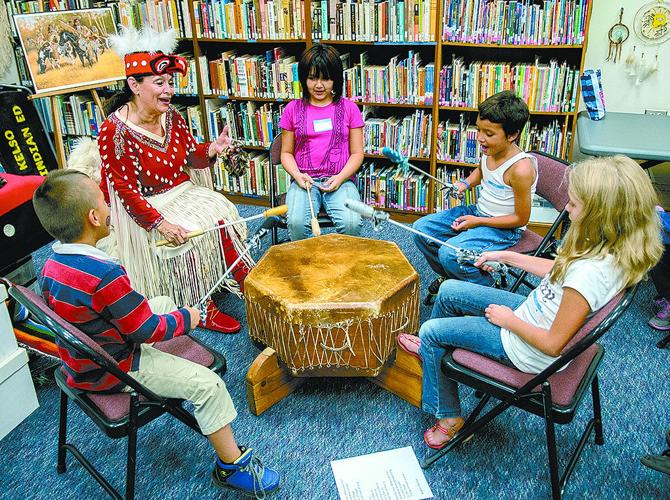 Wallace Elementary students beat on a rawhide drum with LaMere.