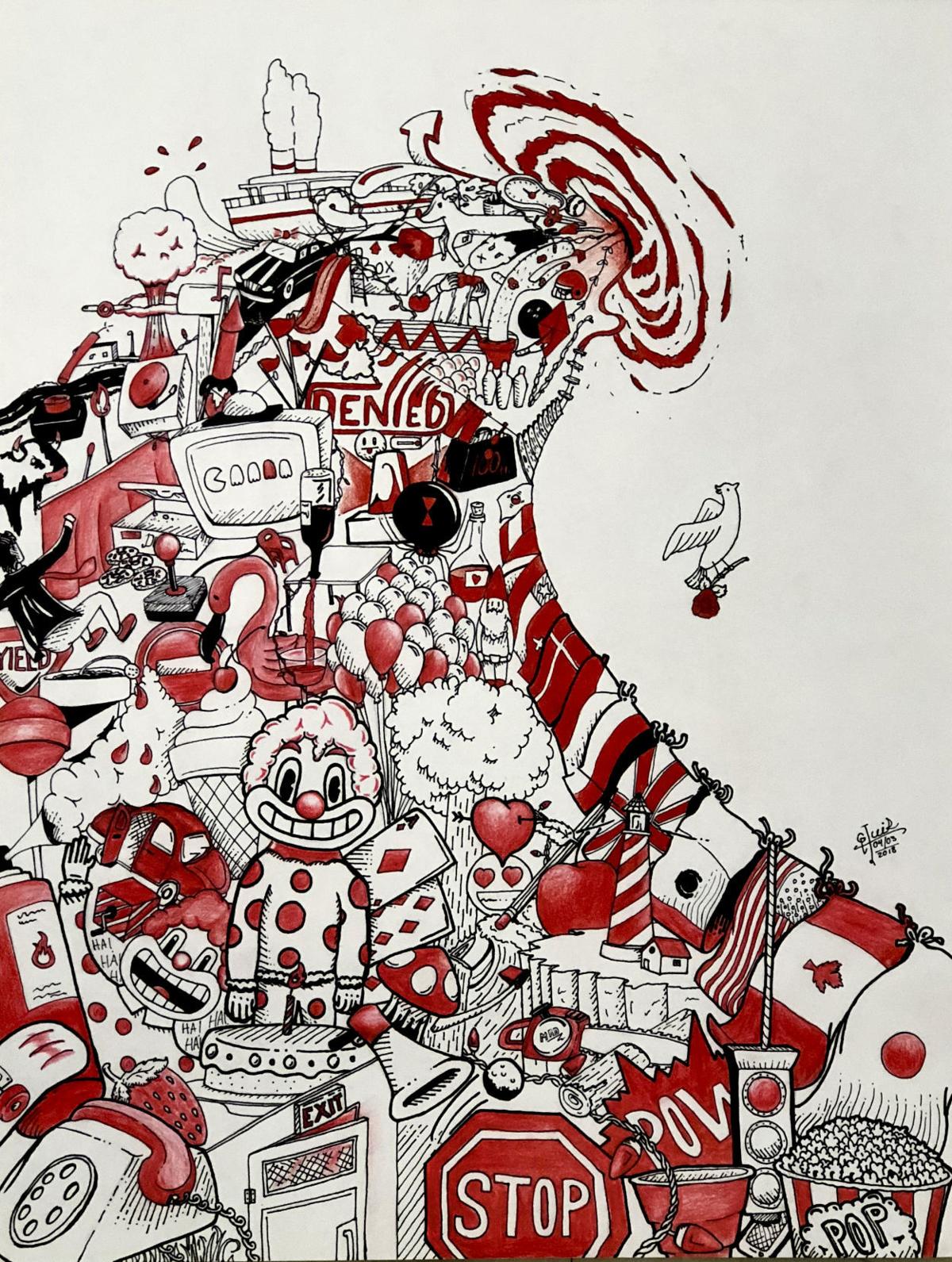 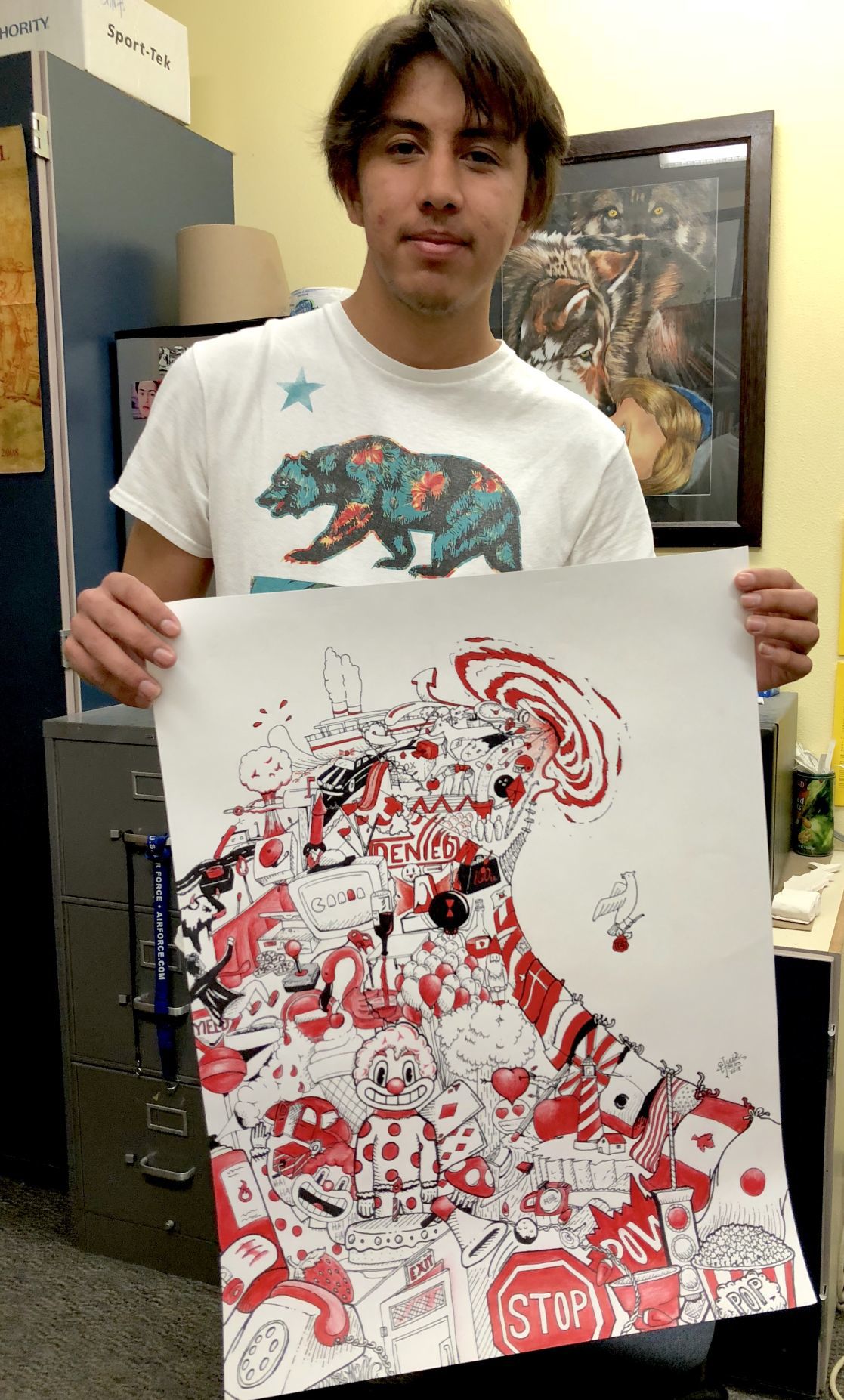 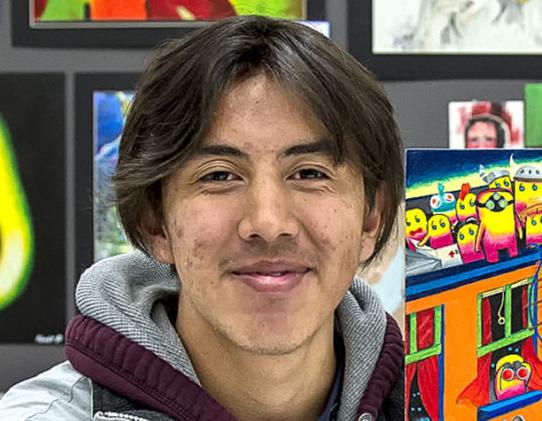 The title “The Red Portal” is quite literal: The black, white and red sketch shows a massive wave of red objects being sucked into a portal in the center of the drawing. Gurrola chose objects that were at least partially red; a stop sign, Canadian flag and black widow spider all make appearances.

Unlike the other objects in the drawing, a white dove carrying a red rose flies away from the portal. Gurrola said the dove was his favorite part of the sketch because it was the only object with a specific meaning.

“You see the color red, you associate it with bad things,” Gurrola said. But because of its purity, the dove can escape the portal, unlike the other objects.

“The Red Portal” only took him four hours to complete. The inspiration came from a drawing by former art student Storm Reid, who graduated in 2016. Reid’s piece “Major” hangs in art teacher T.J. Frey’s classroom, where Gurrola often sees it.

“Sometimes I just walk around to see other pieces that we have here. And I saw this one and it drew my eyes to it. I really like the concept of using one color,” Gurrola said Tuesday.

One weekend he decided he wanted to create a piece that also only used black, white and red. “The Red Portal” was the final result.

“The Red Portal” differs significantly from Gurrola’s usual style, which is bursting with color and sometimes features self-portraits. Using colored pencil to combine colors, he said, is one of his favorite techniques.

But Gurrola went outside his comfort zone for “The Red Portal.” He started by sketching it in pencil, then added black ink and red colored pencil.

“It was more fun and simple than most of my works. I just kind of had fun with it,” he said.

Gurrola pays homage to Reid’s piece not only through color choice, but also by including one of Ried’s characters in his own drawing. “Major” references Leonardo da Vinci’s “The Last Supper.” In lieu of 13 apostles, Reid drew 13 men in suits, one of whom wears a red bow tie and glasses. That character appears at the top of Gurrola’s piece near the portal’s opening.

In a funny coincidence, Reid also won third place in the Congressional Art Competition, the same contest that Gurrola placed third in.

Gurrola was born in New Mexico but spent most of his childhood growing up in Mexico. When he was 14 his mother asked him if he wanted to move back to America to study and learn English. Gurrola said he thought it sounded like a good idea, so he moved in with his aunt in Kelso and entered Kelso High School as a sophomore. He didn’t know English at the time.

“He left his whole comfort zone — his family, his friends, his language — to come and have better academic opportunities. … That’s usually the journey they make after high school, so I’m really proud of him for doing that,” Frey said Tuesday.

Gurrola actually had other drawings in mind when Frey told him she was going to submit one of his works to the competition. He was even more surprised when “The Red Portal” placed third.

A print of “The Red Portal” is on display at the Celebration of the Arts student showcase at the Cowlitz County Event Center. The show runs 8 a.m. to 8 p.m. Wednesday and from 8 a.m. to 2 p.m. Thursday.