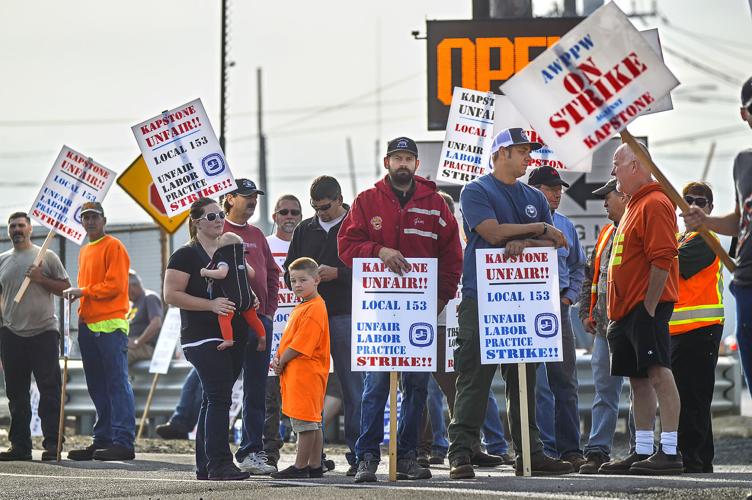 Striking members of AWPPW Local 153 and their families man the picket line outside the KapStone pulp and paper mill in Longview after the union went on strike at 3 a.m. Thursday. 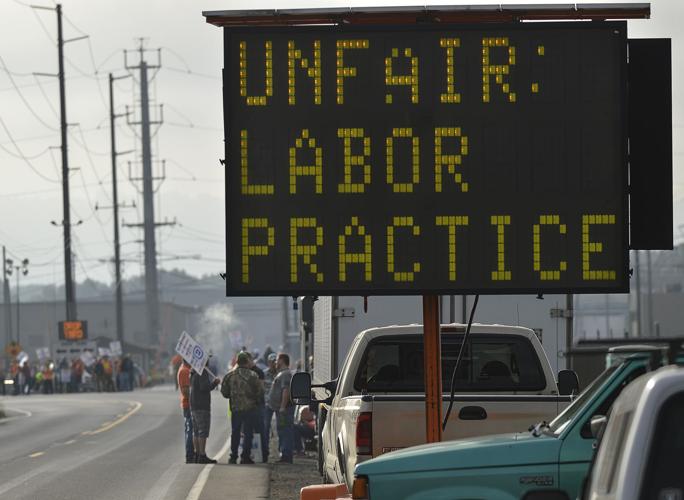 AWPPW strikers highlight their message on a reader board outside the mill. 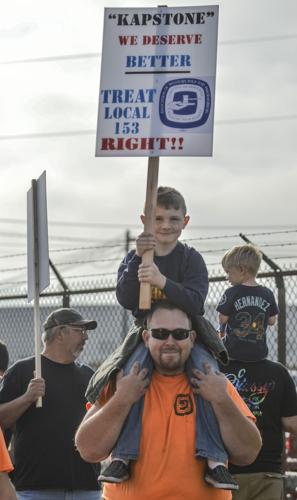 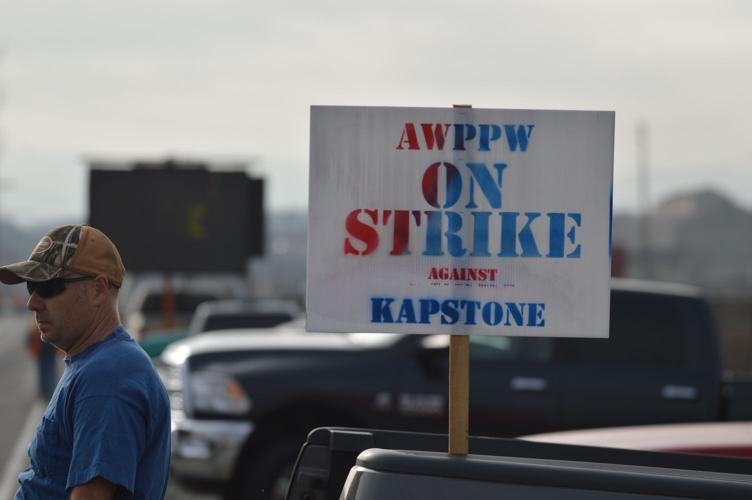 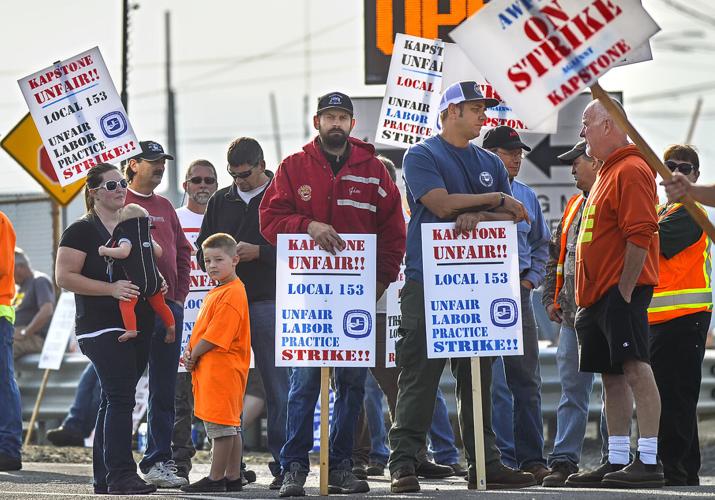 Striking members of AWPPW Local 153 and their families man the picket line outside the KapStone pulp and paper mill in Longview on Aug. 27 after the union went on strike.

The strike began at 3 a.m. Thursday after the union gave the company a three-hour notice at midnight. Association of Western Pulp and Paper Workers Local 153 officials said the length of the strike is open-ended.

The 800-member strike comes after three rejected contracts, including one the company implemented Aug. 10.

The union wants the strike to be recognized as an unfair labor practice strike rather than an economic strike. Such a categorization would likely be contested by KapStone, because the company denies committing any unfair labor practices. The difference between the two types of strikes could determine whether KapStone can hire permanent replacement workers. The National Labor Relations Board may end up deciding that matter.

“Kapstone’s continued illegal activity is unacceptable; the company cannot continue to break the law,” said Kurt Gallow, Local 153 president, in a prepared statement. “The union membership is striking over the company’s unlawful conduct.”

KapStone officials had no comment Thursday. However, the company said in a press release that it has been preparing for a strike since union members rejected a previous contract offer and “has full contingency plans in place to continue to service its customers during the strike.”

No new talks were yet scheduled between the two sides, according to the union.

The union has filed several unfair labor practices charges with the NLRB over a failure to furnish information and other complaints. A hearing for one of those charges is scheduled for December.

“The company has shown a callous disregard for the law by failing to provide to the union information which is critical to the bargaining process,” said John Minor, AWPPW bargaining spokesperson, in a statement.

KapStone Paper and Packaging Corp. officials have previously said they would keep the mill running in the event of a strike.

The union said in the press release that it would “ensure an orderly shutdown and promptly exit the plant site.”

Only a small amount of steam rolled out of the plant around 10 a.m. Thursday. Gallow said all operations at the site were shut down except for some elements that needed to be kept running for environmental and safety reasons.

According to a company press release, the Longview plant is under “a cold mill outage to perform necessary maintenance to its machines.”

“After the maintenance outage, KapStone plans to run its largest machine early next week, with subsequent machine operation to follow,” the company wrote. “KapStone does not expect any interruption of service or products to its customers.”

Earlier this month, KapStone declared an impasse and imposed its latest contract offer. That offer had been rejected by about 68 percent of voting union members.

The two sides have been at loggerheads over a new contract since spring 2014. Members first authorized a strike by vote in December.

It’s been 37 years since Local 153 last went on strike at the Longview mill. That strike lasted five months.

Gallow declined to comment on the strategy behind the timing of the strike, but said the company violated labor laws by implementing the latest contract offer while talks weren’t complete. The union still has 194 work policies and rules it has yet to bargain with the company, he added.

KapStone officials have said that the company declared an impasse after more than a year of negotiations, federal mediation and after union members rejected three contract offers and twice approved two strike authorizations.

About 150 people were picketing outside the plant mid-morning Thursday, although Gallow said that there were as many as 400 people there earlier in the morning.

“It’s been a long night for us here, several of us haven’t gotten any sleep,” Gallow said outside the mill. “We started at about 3 a.m.”

“We’re all prepared mentally,” said Rob Meyers, a 44-year old KapStone paper machine worker who picketed outside the mill. Sun broke through the clouds over the picket line, where workers were generally upbeat and calm at mid-morning.

“We need to get their attention. We need a fair contract and fair work practices,” Meyers said.

A retired KapStone worker who identified himself only as Denny rolled up in a motorcycle to stop and support his former coworkers. Denny said he missed the last strike by a year, after starting at Longview Fibre in 1979. Although he always supported the idea of a strike, he never was able to go on one himself.

“I never wanted to accept a contract they offered. I don’t like authority,” he said flatly. “I don’t like what (corporations) are doing to this country. All they want to do is beat the worker down.”

“I worry for all my (ex-coworkers). I grew up here. I feel for them,” Denny added.

Furnace operator Paul Tolle also started at a young age. Now 60, he noted how many workers like him have grandchildren and great-grandchildren to think about.

“We all got some kind of family to support. Even if it’s just an individual, they have to take care of themselves,” Tolle said.

KapStone employees were joined by members of other local unions Thursday, like Cameron Wilkinson, a business agent with United Association Local 26, which represents plumbers and pipefitters.

Wilkenson said his union usually has about 40 building trades craftsmen on site to do contract work with JHKelly for KapStone, however there were no UA contractors at the site Thursday.

“There are a lot of indirect jobs here locally that have been eliminated by KapStone,” he said. “This has been a long-term employer for the community. These are hard workers who have made this company a lot of money.”

Feb. 11: KapStone exec vows to keep mill running in event of a strike

Striking union members have lost access to their Kaiser Permanente health insurance, according to union officials.

A union picket was struck and injured by a contractor vehicle that was leaving the KapStone mill, angering hundreds of striking union members …

Striking members of AWPPW Local 153 and their families man the picket line outside the KapStone pulp and paper mill in Longview after the union went on strike at 3 a.m. Thursday.

AWPPW strikers highlight their message on a reader board outside the mill.

Striking members of AWPPW Local 153 and their families man the picket line outside the KapStone pulp and paper mill in Longview on Aug. 27 after the union went on strike.