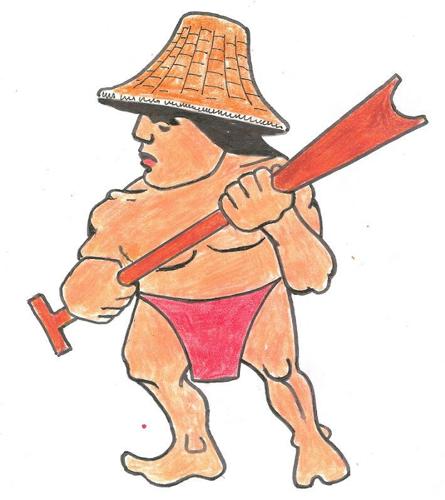 Above: draft of new logo. Below: old logo. 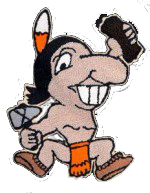 Charlie Chinook, Kalama High School’s Indian mascot, has buck teeth, a large nose, wears nothing but a loin cloth and a feather in his hair and holds a tomahawk.

The original image was never specific to a Chinook Indian. It was “Jumpin’ Joe,” an early 1900s caricature of a Native American best known as the former Arizona State University athletic logo. Jumpin’ Joe originally carried a human scalp. The scalp was replaced with a diploma in Kalama’s depiction.

After two decades of requests from the Chinook tribe, school administrators say it’s time for a change. Charlie is getting a makeover.

“It’s always kind of been on the back burner,” said Ryan Cruser, Kalama School Board president. “We just decided, we really need to address this once and for all. ... It was the right time for us.”

And the man redesigning the logo? The real “Charlie the Chinook” — Charlie Funk, a Chinook tribal member and political cartoonist for The Chronicle in Centralia. Funk said the school principal was the first one who made the joke.

“The kids picked up on it too,” Funk said with a laugh.

School administrators are consulting the Chinook tribe, as well as involving a student leadership class in the Charlie remodel.

Funk said his school in South Bend had the same mascot — which “certainly didn’t look like Chinooks did.” And as a Chinook himself, he never made the connection.

“I guess we never thought about it being an Indian. We were the Indians and that was the logo,” Funk said. “Nobody saw anything wrong with it for years. Now it’s a bit of a different world.”

Recent controversy with Native American mascots has pushed other schools to make changes. The Oregon State Board of Education ruled that schools with American Indian mascots must choose new ones by next year unless they secure the tribe’s permission. And there’s uncertainty about whether Washington would follow suit, Cruser said.

“We can’t wait to get sued before we make a change,” Cruser said. “We have to be proactive, choose something that’s respectful for the tribe.”

But the issue was brought to the forefront this year. Kalama School District Superintendent Eric Nerison was hired in March 2015, and Kalama High School Principal Guy Strot was hired a few months later. Funk said the new administration found the file of decades of change requests from the Chinook tribe, and they wanted to honor them.

Cruser said the process will eventually involve the public.

“It’s something we’ve had for many years, and Charlie Chinook is important to our history at the school,” Cruser said. “We’re going to make sure that all of our stakeholders get input.”

The current draft of the design gives Charlie a red loincloth, a paddle and a traditional Chinook basket hat. Funk said he has already received suggestions he hopes to incorporate in the design, like the school colors.

He said he wants to do it justice.

“Not very often does a school approach a tribe to do the actual logo. ... I’m very glad that Kalama wants to make it right,” Funk said. “It’s just a good thing to do, that’s all. And they’re good people. I can’t say it enough.”

Longview's pallet-home village for the homeless has been opened for about a month. Here's what life is like living in the tiny homes.

Patrick Bryson, of Vancouver, said it took 42 hours to carve Big Foot out of a 12-foot stump at 147 View Point Drive in Longview.

One vehicle flipped on its roof.

The woman was last seen on Jan. 4.

As February approaches, local sportsmen and women start to think about smelt dipping.

Another Cathlamet man was also injured.

The home can house people getting out of prison through the Department of Corrections' housing assistance vouchers.

As written, the county board's bylaws would prevent, for example, a currently employed doctor from joining the board, according to a county attorney.

The driver hit an embankment, allegedly launching the pickup into trees.

Cars lined across nearly three city blocks to get their share.

Above: draft of new logo. Below: old logo.