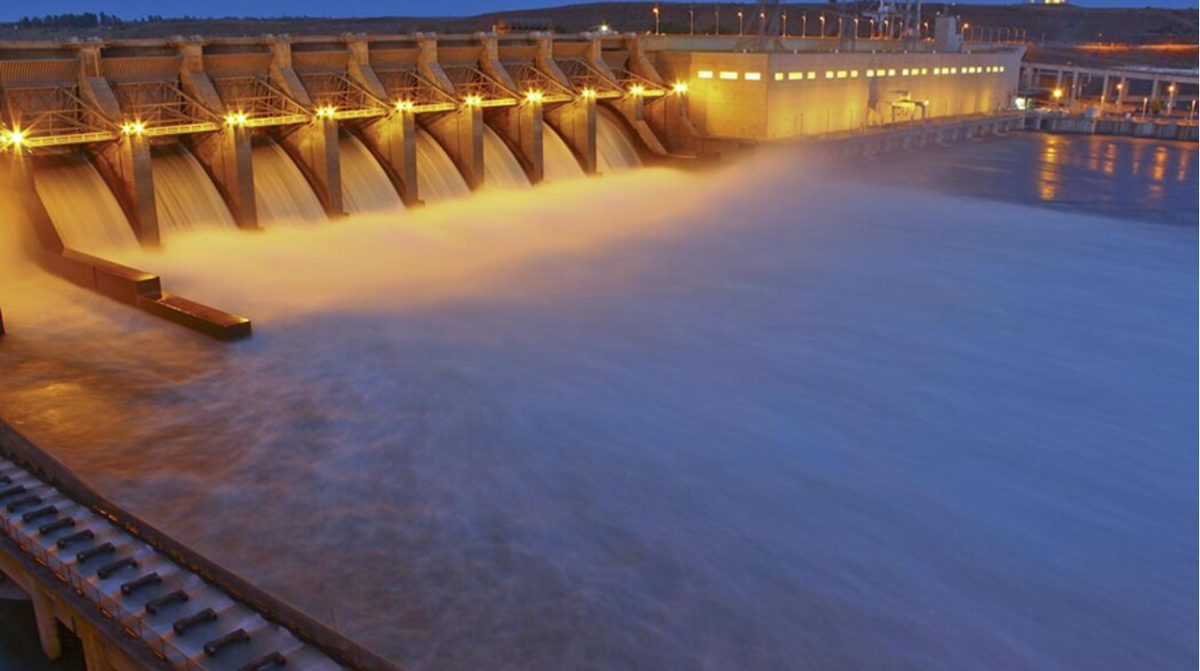 Ice Harbor Dam, the first of four hydropower dams constructed on the Snake River, is part of the larger, multi-damn hydropower operating system managed by the U.S. Army Corps of Engineers on the Columbia and Snake rivers. The dams are once again under fire from conservation groups, which are pushing for dam removal in an attempt to restore Northwest salmon populations. 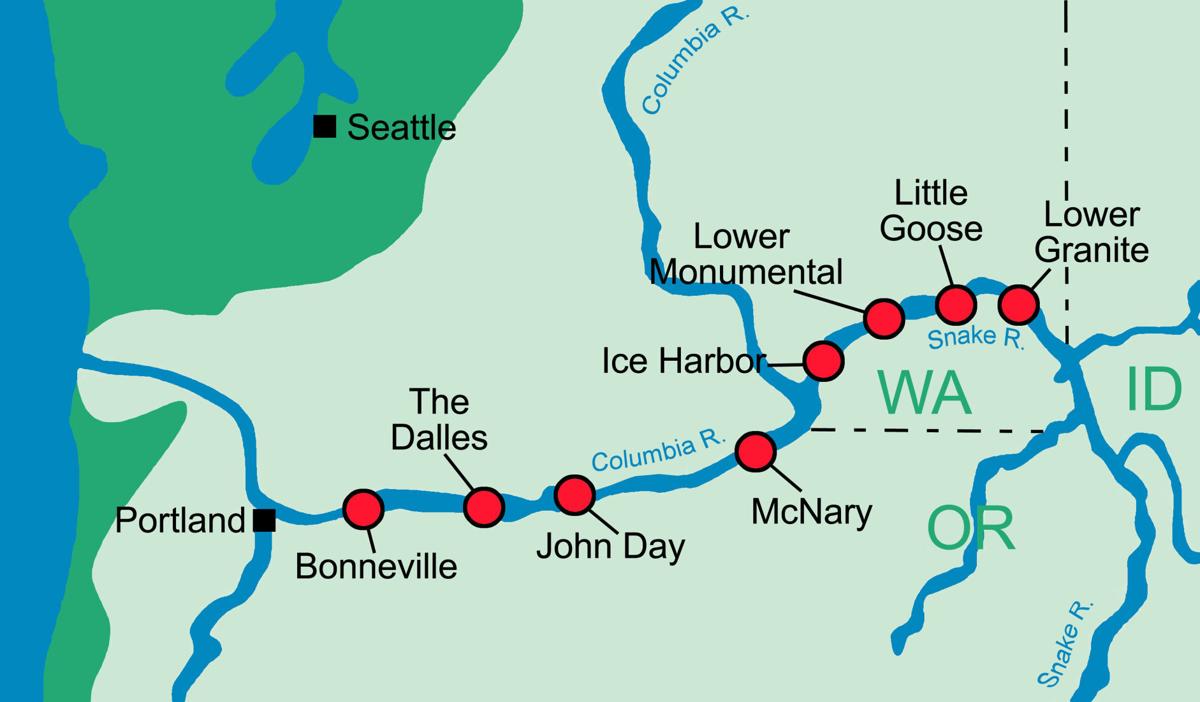 Dams along the Columbia and Snake rivers are addressed in the Environmental Impact Statement signed this week.

For the sixth time since the mid-1990s, a coalition of fishing and conservation groups said it intends to legally challenge the latest federal plan for dam operations on the Columbia and Snake rivers.

The plan outlines how to manage 14 federal dams along the lower Columbia and Snake rivers, including four highly controversial dams on the Lower Snake. For decades, environmentalists have pushed to remove those dams, which can hinder salmon migration to and from the ocean and contribute to a dwindling food supply for southern resident orca near Puget Sound.

Under the new plan, the Snake River dams would operate under a “flexible spill” management style, where water is spilled over the dam to aid in the survival of juvenile salmon swimming downstream to the ocean.

The conservation groups on Friday filed a 60-day notice of intent to file a lawsuit. If filed, the suit would challenge what Earthjustice attorney Todd True called a “suite of problems” with the plan, including how the federal agencies did not ensure that the dam operating plan would not jeopardize salmon populations, a key requirement of the Endangered Species Act.

“It talks about climate change a lot, but it doesn’t actually put together a plan that takes climate change into account,” he said. “So the ability of the plan to protect the (endangered salmon) species is probably not very good, because climate change is going to make things worse for salmon in the years ahead.”

Proponents for the dams called the threat of a lawsuit “disappointing” and “the wrong action focusing on the wrong target.”

“For over a year we’ve been hearing from a lot of groups that it’s time to move away from the courtroom and work together collaboratively and find a solution that doesn’t require just an endless loop of litigation. We were kind of expecting a different approach by a lot of the groups that signed onto this Earthjustice lawsuit,” said Kurt Miller, executive director of Northwest River Partners, which represents community-owned utilities including the Cowlitz PUD.

Stakeholders on both sides say they would prefer not to see the lawsuit actually filed. However, neither side appears willing to yield in their stance about dam removal, so the litigation is likely to reach the court.

The lawsuit would be the “sixth incarnation of a long legal fight” surrounding the dams, of which conservation groups have won five previous challenges to federal operating plans issued in 1994, 2000, 2004, 2008 and 2014, according to Earthjustice.

“And unfortunately, this new plan is not really materially different than the one the court threw out in 2016,” True said. “What this plan does is say, ‘We will be OK because what we will do under this plan is a little bit better than what we would do under the old plan. But the old plan itself was illegal, and a little bit better is really not what the law says needed to be looked at.”

True added that the point of the 60-day notice letter is to give the federal agencies “a chance to figure out how they want to fix things.”

“They may not do that, of course. They have not in the past.”

Conservationists favor the idea of breaching four dams — Ice Harbor, Little Goose, Lower Monumental and Lower Granite — on the Snake River in eastern Washington. But the latest lawsuit announcement makes it clear that dam removal is the only option these groups believe will restore struggling salmon populations, said Miller, the director of the utilities coalition.

Such a move could devastate the power industry and jack up utility bills, he said. It would also disrupt the region’s river navigation and commerce system, which local ports use heavily for grain shipments.

The dams also made it possible to barge more than 3.5 million tons of cargo, or nearly 244 four-barge tows worth, along the waterway in 2017. Much of that cargo goes to the local grain terminals at the ports of Kalama and Longview.

Instead of dam breaching, conservationists, utility groups, ports and other stakeholders should work together to address other threats to salmon population, not the least of which is warming ocean conditions, Miller said.

More recent studies have indicated that the “real threat to salmon is oceanwide because climate change is causing ocean water to warm and acidify. And that’s shifted the balance between predators and prey.”

According to one study from the University of Alaska, salmon in the Northwest region are returning sooner and smaller than ever before, “most likely because ocean conditions are more hostile,” Miller said.

“I think for some of these groups, there is kind of a desire to breach first and ask questions later. But we really believe there is a lot of science that still needs to be done to determine if that is the best approach to salmon recovery,” Miller said.

“We really think it’s a step in the wrong direction to talk about removing the region’s best tool for fighting climate change. Hydropower provides 90% of the region’s renewable power,” he added.

“Right now it feels like people are not willing to listen to new information, and they are stuck in historical beliefs. … . We are really hoping that these organizations will join us in partnerships we call for direct scientific tests of some of the things people have speculated about in the past,” Miller said.

“We don’t know of any plans short of removing the dams that will actually protect the fish. If there is one out there, we’d love to hear it,” True said. “But it’s been 20-something years since the scientists have said this is the single biggest thing we can do (to help salmon), and the evidence keeps getting stronger and stronger. And the need keeps getting more and more urgent.”

A missing 72-year-old woman was found dead Monday in a remote stairwell in the building she was living in, according to Kelso police.

Cowlitz County’s COVID-19 activity is continuing to rapidly increase and shows no sign of slowing down, according to the health department.

The number of COVID-19 patients hospitalized statewide has doubled in the past three weeks as cases continue to surge, according to the Washin…

PeaceHealth St. John Medical Center is no longer allowing visitors in the emergency department, including the waiting room, because of the ris…

Kelso Police Officer Shayda Panah was at a training session and her phone kept ringing. When she picked up, she got a surprise: She had been n…

Out on the sidewalk bundled up in gloves, knit hats and puffy down coats, a duo of women curled barbells in the crisp winter morning air befor…

Ice Harbor Dam, the first of four hydropower dams constructed on the Snake River, is part of the larger, multi-damn hydropower operating system managed by the U.S. Army Corps of Engineers on the Columbia and Snake rivers. The dams are once again under fire from conservation groups, which are pushing for dam removal in an attempt to restore Northwest salmon populations.

Dams along the Columbia and Snake rivers are addressed in the Environmental Impact Statement signed this week.