'Bummed out': SpaceX launch scrubbed because of bad weather 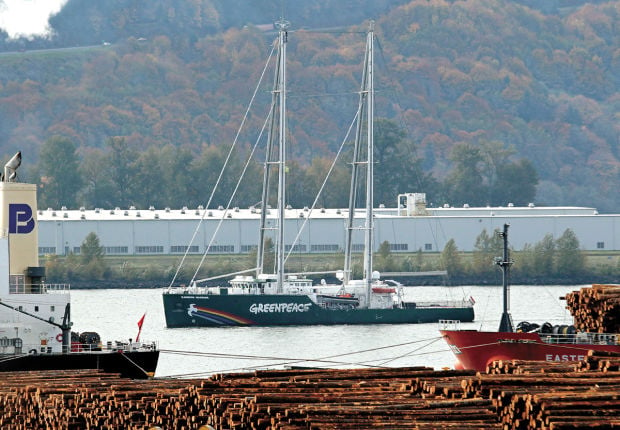 The Greenpeace vessel Rainbow Warrior heads past the Weyerhaeuser Co. log dock in Longview on its way to Vancouver. 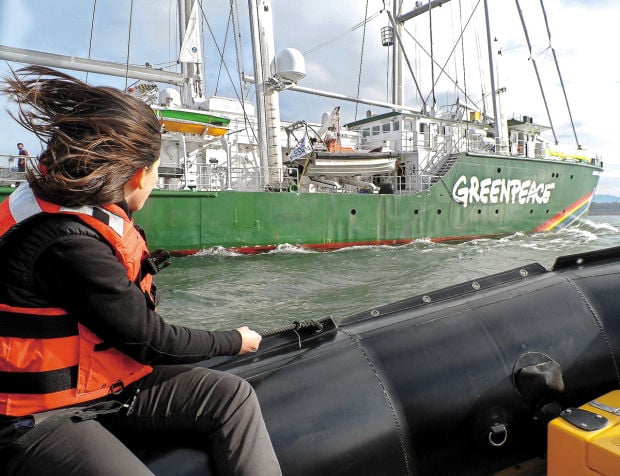 Kelly Mitchell, a Greenpeace energy campaigner, watches the Rainbow Warrior sail up the Columbia River near Kalama on Wednesday afternoon. The vessel swung by as part of a West Coast tour.

The Rainbow Warrior, the third such Greenpeace vessel known worldwide for its forays to protect the environment, took its first voyage up the Columbia River Wednesday afternoon to deliver a message against Pacific Northwest coal exports.

The 190-foot long, A-frame masted sail boat with an electric motor was traveling to Vancouver for tours this weekend. In Longview, about a half-dozen local anti-coal protesters waved signs on the Rainier shoreline and took rides in Greenpeace’s rigid hull inflatable boats to get a closer look in the middle of the river.

“It was just awesome,” anti-coal activist Les Anderson of Longview said after getting a close-up view.

Crew members hung a sign on the starboard side that read “End the Age of Coal.” They did not seek to block any ships and were out on the river solely for a West Coast tour to raise awareness primarily about coal exports.

The $30 million boat was built in Germany and commissioned in 2011. Greenpeace raised money to build it through thousands of online donations. Painted green with a rainbow near the bow, the vessel is powered primarily by the wind, which fills sails that extend 180 feet into the air. It has an energy-efficient hull designed to reduce drag as it cuts through the water, Greenpeace officials said.

The Rainbow Warrior kicked off its West Coast tour in Seattle earlier this week and is eventually heading to San Francisco. It’s available for public tours from 10 a.m. to 5 p.m. Saturday and Sunday at the Vancouver landing.

Greenpeace officials said they want to fire up activists who are protesting the proposed $643 million Millennium Bulk Terminals coal dock west of Longview. The terminal has put Longview at the center of the fight between environmentalists worried about coal-industry expansion and industry and union backers touting job creation at the terminal.

Local activists said the Rainbow Warrior is an exciting symbol for their cause.

“This is something that all of us in the Greenpeace movement have been following for years,” Gayle Kiser of Longview said.

Greenpeace vessels have taken to the seas for the last four decades to protest nuclear weapons and coal development and to support other environmental causes. The original Rainbow Warrior was destroyed in 1985 in a New Zealand harbor during a protest of French nuclear weapons testing in the region. The second Rainbow Warrior sailed for 22 years before it was decommissioned in 2010, and it made one trip on the Columbia River in the 1990s.

The group has two other boats, the Esperanza and the Arctic Sunrise, which it uses in nonviolent protests at sea.

Editor's note (Oct. 31): A previous version of this story misstated where the Rainbow Warrior was built. This version is correct.

Erik Olson covers business and the economy for The Daily News. Reach him at 360-577-2510 or eolson@tdn.com.

The Greenpeace vessel Rainbow Warrior heads past the Weyerhaeuser Co. log dock in Longview on its way to Vancouver.

Kelly Mitchell, a Greenpeace energy campaigner, watches the Rainbow Warrior sail up the Columbia River near Kalama on Wednesday afternoon. The vessel swung by as part of a West Coast tour.