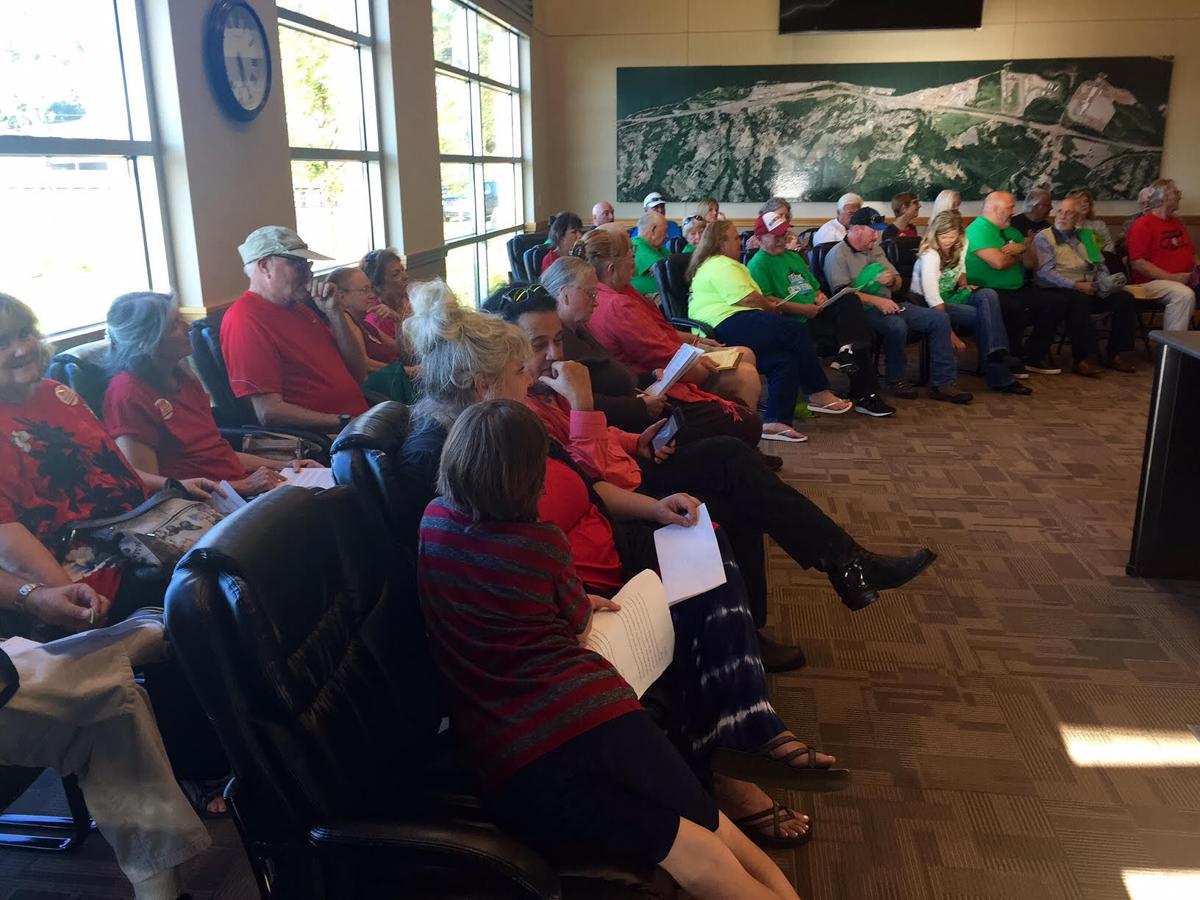 The Port of Kalama meeting room only held fraction of people who attended the commission's regular meeting. 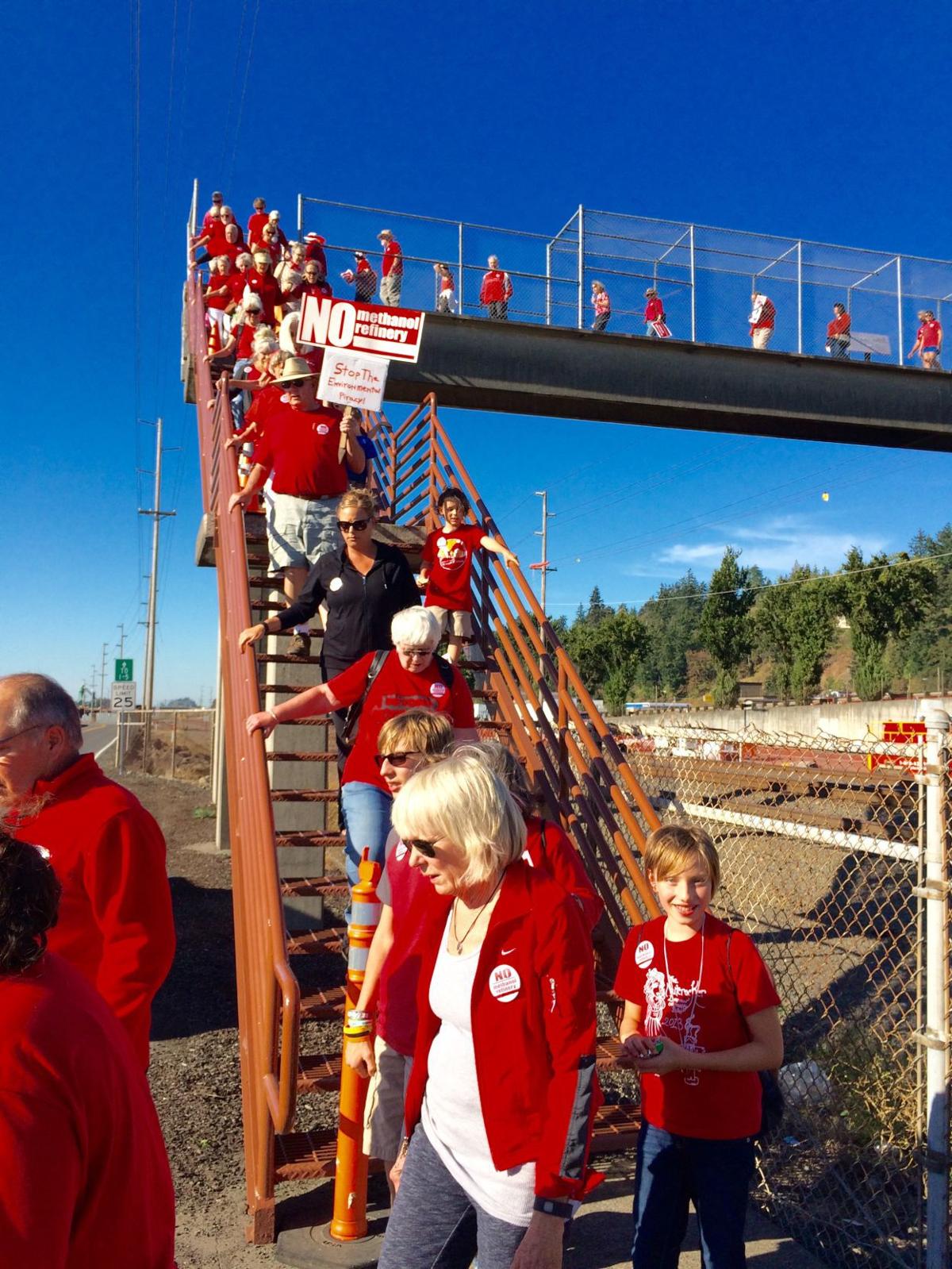 Protesters against the methanol plant march across the pedestrian bridge to the port Wednesday. 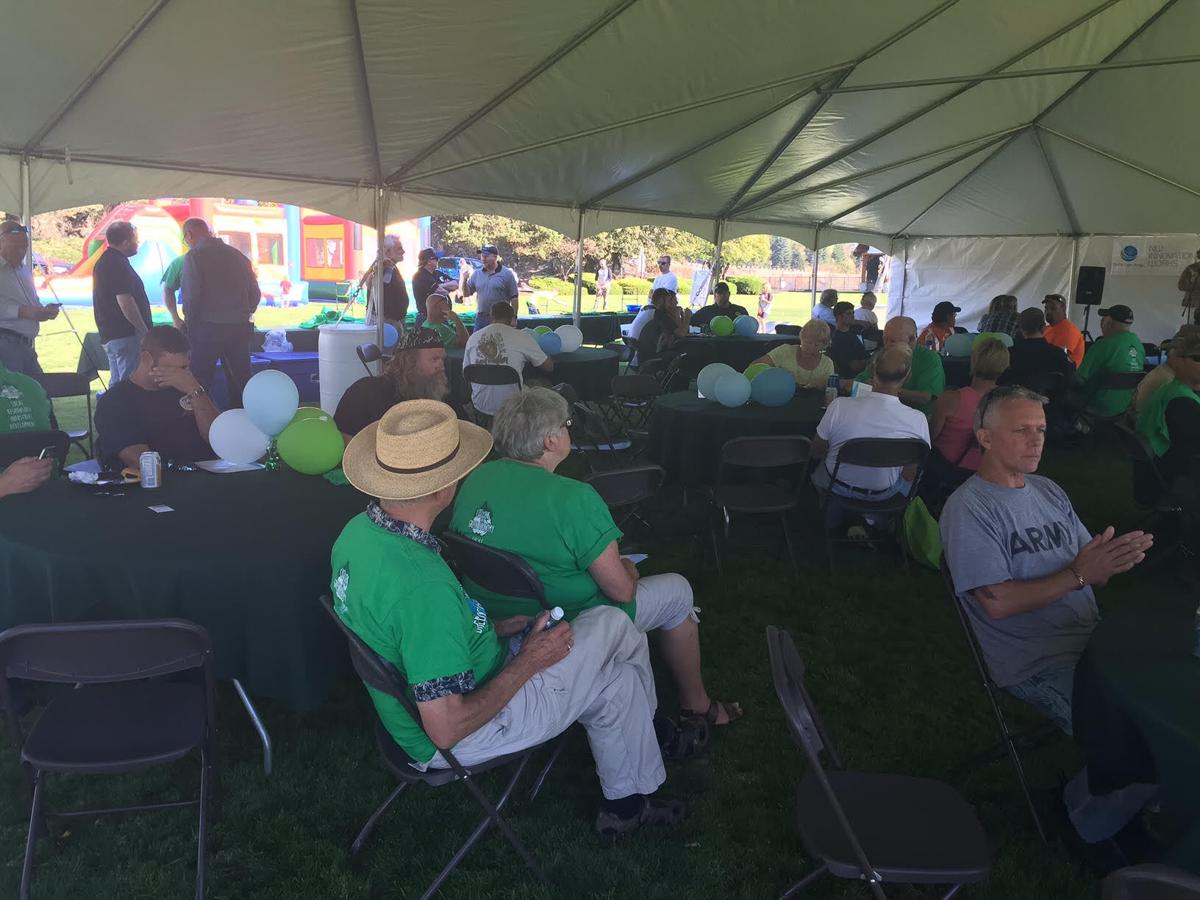 Proponents of Northwest Innovation Works listen to speakers at a barbecue/rally in support of the project.

KALAMA — The debate over Northwest Innovation Works’ proposed methanol plant continued to heat up this week as a few hundred people attended competing rallies for and against the project Wednesday afternoon.

At least 100 people then packed a Port of Kalama commission meeting in the evening to address the board. There was nothing on the agenda related to the $1.8 billion project, but attendees in green and red shirts made appeals to the commission on the merits or risks of the project.

Northwest Innovation Works’ proposed plant would be built on leased port property just north of Steelscape, and employ about 192 workers.

Loudspeakers projected what was said inside the meeting room to clusters of people waiting outside the building holding signs and waiting for their chance to speak.

The meeting started with Port Executive Director Mark Wilson clarifying “a misunderstanding.” The opponents scheduled the rally believing the commission next month could have had the option to cancel the lease with Northwest Innovation Works. However, unknown to them, the commission delayed the schedule a year to allow for more time for permitting.

Even though Wilson emphasized that Wednesday’s port meeting was not a formal legal hearing on the project, attendees had prepared as if it was one.

A draft environmental impact study of the proposal released earlier this year found no major safety or ecological issues associated with the plant. Nevertheless, at their rally and in the port meeting, opponents reiterated their concerns about air quality, heavy water usage and climate change.

Don Watt, a Chehalis resident originally from St. Helens, held a sign sporting pictures of Chinook salmon and which read “No Petro Stench On Our Columbia.” The recent retiree and occasional angler noted that the “fish can’t talk so someone has to speak for them.”

Seven-year old Dylan Haviv called on commissioners to reject project because of its pollution risk, and ties to fossil fuels. (The plant would convert natural gas to methanol for use in China to make plastics).

“You know fossil fuels are not clean, green energy. Everyone in my second grade class knows it, so surely you must too,” Dylan said.

Dylan also spoke at an anti-methanol rally before the meeting, which was held at Toteff Park in downtown Kalama.

Across the railroad tracks, a pro-methanol barbecue with speakers and a bouncy house was held in Kalama Marina Park. There were about 150 people there at about 4 p.m., although organizers said they had reached 300 people throughout the four-hour event.

Methanol supporters argued that opponents are peddling misinformation, and argued the region needed the industrial jobs.

“My greatest concern with this whole process is that there a group of people who are only on one diet” of information, said Tia Nelson, Kalama resident.

Nelson said that through research and speaking with the company she was able to have her questions answered, and she encouraged others to keep an open mind.

Retired physician Dan Roberts argued there isn’t enough evidence to support contentions that the methanol plant could lead to serious health risks for the community. Although methanol is toxic, workers’ exposure can be reduced through strict compliance, he said, and added that he could “find no studies that link methanol pants to illness in the community.”

Port of Kalama and Cowlitz County are currently working through comments received on a draft environmental impact statement for the project. There are no dates yet on when the final environmental study will be released.

The goal is to make sure the buildings fit in the larger community, Westerman said, and the project has been “very intentional” in the families it hopes to house.

The Port of Kalama meeting room only held fraction of people who attended the commission's regular meeting.

Protesters against the methanol plant march across the pedestrian bridge to the port Wednesday.

Proponents of Northwest Innovation Works listen to speakers at a barbecue/rally in support of the project.