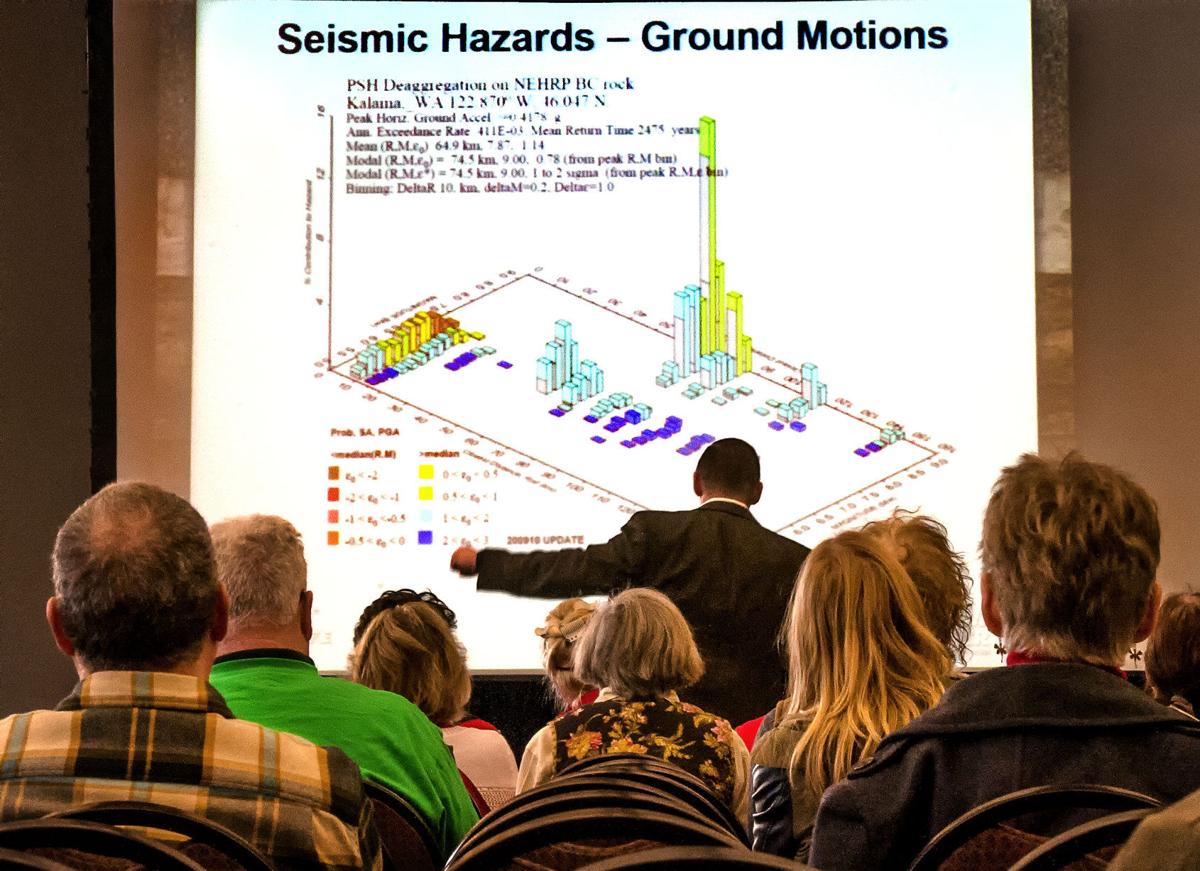 Mark Rohrbach explains to the county hearing examiner Monday how the methanol plant was designed to withstand a major earthquake. 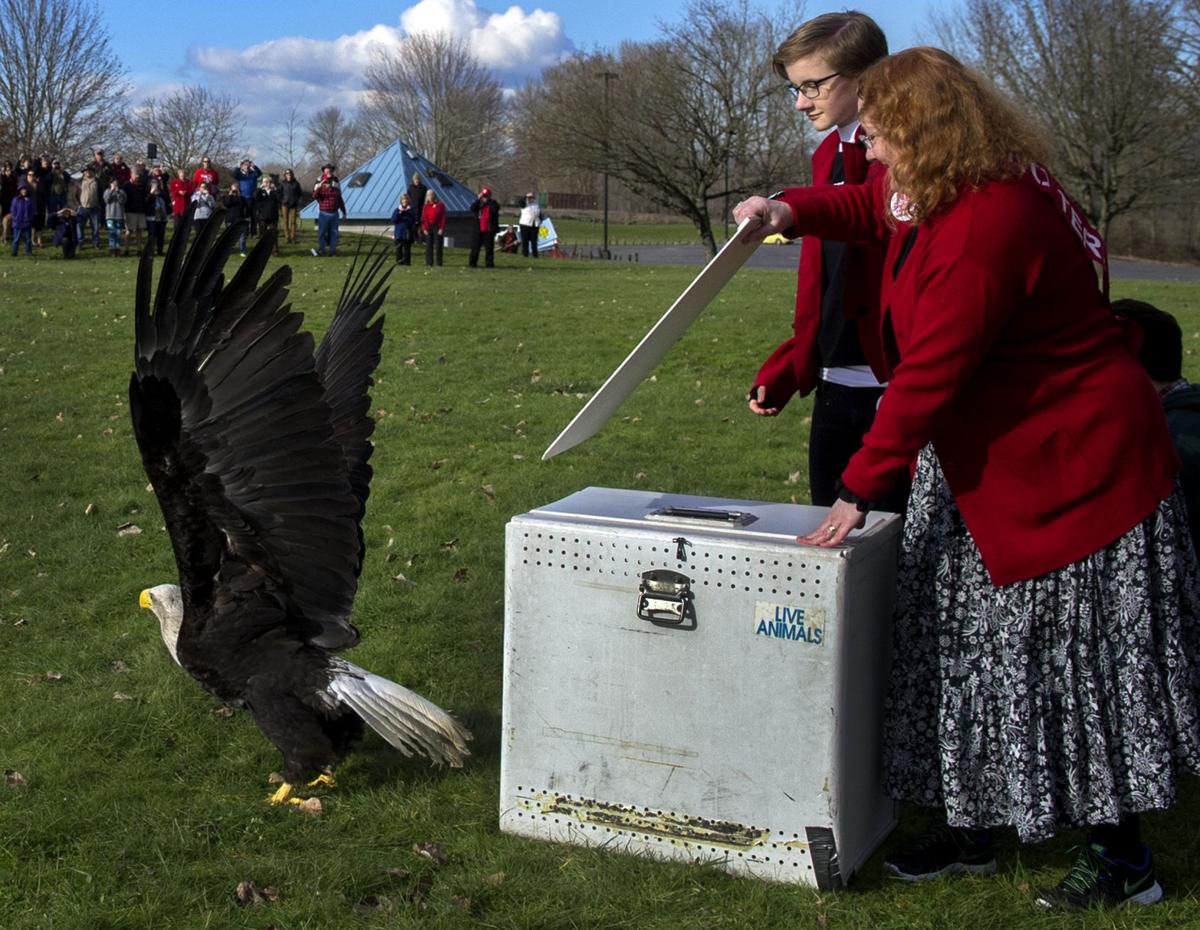 A rehabilitated bald eagle, which suffered a broken wing in 2015, is released back into the wild at Gearhart Gardens Park in Longview Monday. The event was organized by Columbia Riverkeeper and Audubon Society of Portland, which opposes the proposed methanol plant at the Port of Kalama.

Several hundred people attended a hearing Monday on a key permit for the proposed $1.8 billion Kalama methanol project, and the hearings examiner promised a speedy decision.

The first of three days of hearings for a shorelines permit got off to a slow start, with most of the day taken up by presentations by Cowlitz County staff and the proponents of the project. Testimony will be accepted Tuesday and Wednesday.

Hearing Examiner Mark Scheibmeir says he’ll make a decision on whether to permit the plant within 10 days of the hearing’s completion.

The hearing won’t be considered “complete” until three days of public testimony and presentation are done and until Scheibmeir receives any additional information he requests from the project applicants. That usually takes about one to two weeks, he said.

After the formal completion of the hearing period, Scheibmeir will have 10 days to decide on whether to grant the permits.

A shoreline permit would be a major step for the project, which Northwest Innovation Works first proposed three years ago. The project is expected to create nearly 200 permanent jobs, 1,000 construction jobs and millions of dollars of tax revenue. The project would convert natural gas into methanol, which would be shipped to Asia for the manufacture of plastics.

Scheibmeir started the week’s events with a no-nonsense message.

“I don’t care for any petitions. I’m not conducting any kind of popularity contest,” he told the audience, many of whom wore red or green shirts to show their opposition or support for the project. Instead, Scheibmeir said he would consider the facts attached to any petition.

“Facts mean something to me,” he said, while seated at a table stacked with binders of background on the project. He added that he wouldn’t tolerate any disruptions or noise. “This is not a pep rally. This is not a basketball game. This is a serious public hearing.”

Cowlitz County staff are recommending approval of the permit, which is needed for any project within 200 feet of a water body. A 45-page report outlines the county’s position, as well as its conditions that the plant must mitigate for noise as well effects to wildlife habitat, wetlands and aquatic lands, among other conditions.

But Scheibmeir seemed to show skepticism about the plant’s mitigation plans, pressing the county and Northwest Innovation officials for more details.

“To be honest (the methanol mitigation plan) seems underwhelming relative to the size and scope of the project,” Scheibmeir said.

Scheibmeir’s questions touched on several citizen concerns he picked up on during previous periods of public comment, including potential odor from natural gas, the plant’s response to earthquake risks and greenhouse gas emissions.

Northwest Innovation Works proponents highlighted the environmentally friendly components of the project: the ultra-low emissions technology to reduce greenhouse gas emissions; the zero-liquid discharge methods to avoid releasing wastewater into the Columbia River; and the fact that their product would reduce the industry’s reliance on coal.

“While we can’t mitigate every impact down to zero, by listening to the public and being flexible in response, we are proposing a substantially lower impact project today than we had originally put forward,” said Rick Desimone, adviser for Northwest Innovation Works. He argued that natural-gas methanol would be a cleaner feedstock into plastics than coal.

“Rejecting this plant would be environmentally irresponsible as long as the people of Cowlitz County and the state of Washington continue to purchase products made from synthetic materials,” Dismone said.

An hour and half lunch break was filled with competing rallies for and against the project.

About 100 opponents gathered at Gearhart Gardens Park on the Cowlitz River to listen to speeches and witness the release of a bald eagle back into the wild. The bird has been under rehabilitative care of the Audubon Society of Portland after it was hit by a car in February 2015. Micah Meskel of Audubon Society said the methanol project posed a threat to the Columbia River’s ecosystem.

One recreational angler worried how the plant would harm fishing on the river. “I cannot see myself fishing in the shadow of this behemoth” said John Flynn of Kalama.

Meanwhile, proponents from Citizens for a Green Economy held a lunch rally across the main Expo Center building.

“Standing up for our local communities has grown tougher with interest groups from outside our geography, funded by anonymous entities, that have an agenda which in this case does not align with our local economy,” said Dan Guglielmo of Longview, member of Citizens for a Green Economy who also works for industrial contractor JH Kelly. “They don’t know our community, what we want and how hard we’re prepared to fight for our livelihood.”

Mark Rohrbach explains to the county hearing examiner Monday how the methanol plant was designed to withstand a major earthquake.

A rehabilitated bald eagle, which suffered a broken wing in 2015, is released back into the wild at Gearhart Gardens Park in Longview Monday. The event was organized by Columbia Riverkeeper and Audubon Society of Portland, which opposes the proposed methanol plant at the Port of Kalama.