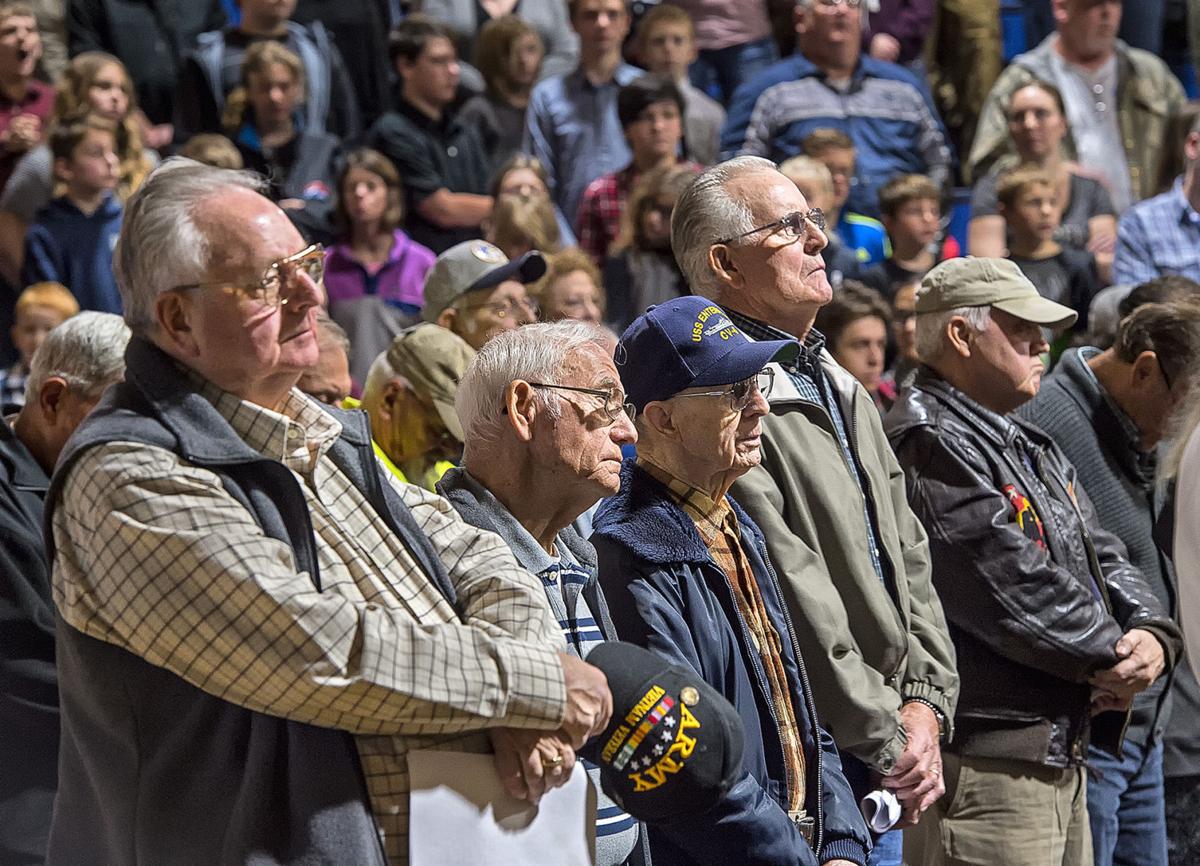 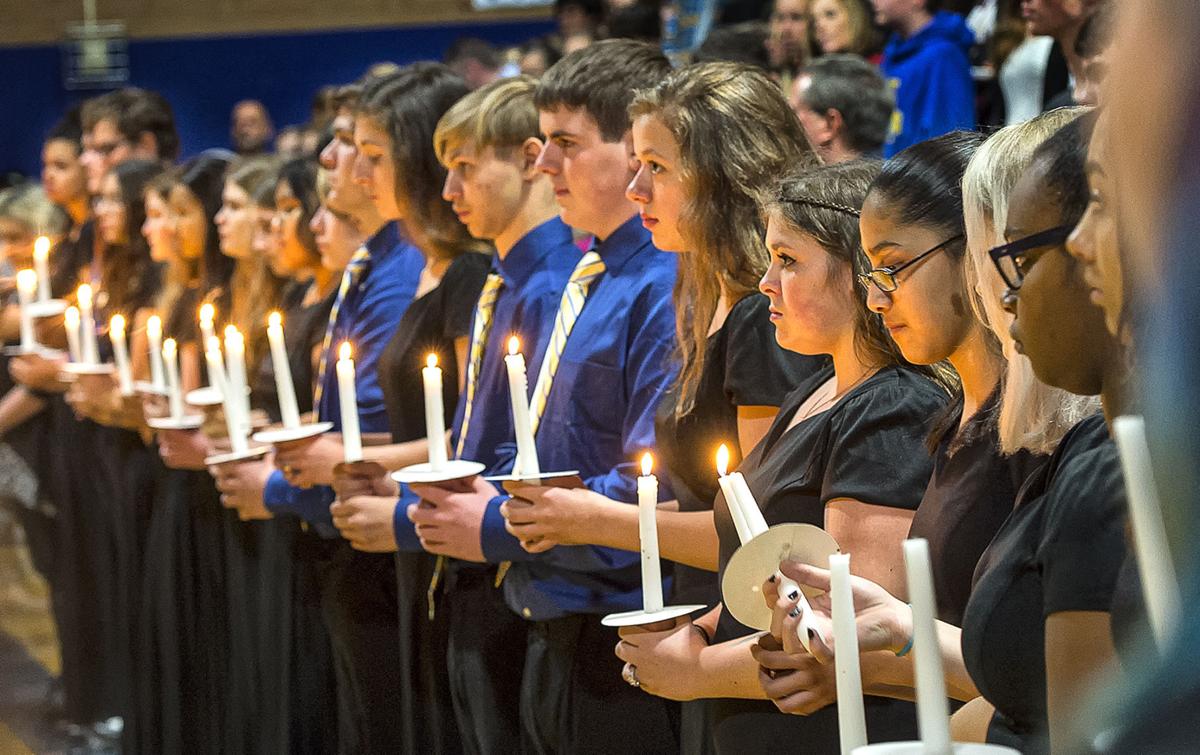 Kelso High School Choir members ringed the basketball court floor and lit a candle for each of the 78 names read of Kelso graduates who had died during service in the military.

Exactly 28 years ago, Jim Powers of Kelso stood on the Berlin Wall with a sledgehammer, cracking into the last symbol of communism in Eastern Europe.

“Today is a special day for those us that served in the Berlin Brigade,” Powers told Kelso High School students gathered for the annual Veterans Day assembly Thursday.

“Nov. 9 , 1989 the Berlin Wall fell, ending communism as we know it in Europe. Still hasn’t ended in other parts of the area. But most of the veterans here had the task of defending you guys, or the United States against that.”

Powers was one of 48 local veterans who shared their stories at the school’s annual event. Handmade banners in red, white and blue hung around the school’s hallways with phrases such as, “Thank you for your service” and “We don’t know them all, but we owe them all.”

Vets sat in folding metal chairs in the high school gymnasium surrounded by 1,500 students seated in blue bleachers. Students stood with hands on their hearts as the choir sung the national anthem and “Hallelujah” during the posting of the flags. Leadership students read poems before the microphone was passed to veterans.

Steve Johnson, who served in the U.S. Army, was the first to speak.

“You, the youth of our country, need to understand, the world is a dangerous place. We feel safe here, I feel safe, my children feel safe, my grandchildren feel safe — but you someday may be called to defend that,” Johnson told students. “So be strong of character, strong of mind, strong of will. It takes those things to survive. I hope that we never have you serve in time of war, and that peace can prevail.”

World War II veteran Floyd Miralles of Longview was one of at least two veterans in their nineties.

“I joined the Navy exactly a year before Pearl Harbor,” Miralles said. He was stationed in Hawaii, but left just a few days before the bombing.

“That’s why I’m able to be here today,” Miralles said, choking back tears.

Miralles said it was “humbling” to attend the Kelso High ceremony.

“Thank you for honoring us,” he told students.

Hearing stories from vets in their 90s was poignant, said veteran Karin Seehafer of Olympia, whose son attends Kelso High. Seehafer wore a denim jacket dotted with patches from her time in the U.S. Navy during the Gulf War.

“It’s so great to hear other vets talk about their stories. It reminds me of all the sacrifices we have made,” Seehafer said.

After several minutes of veterans speaking, the room darkened slightly and recorded violin music drifted in over the speakers. Choir students dressed in black and yellow robes walked out in the perimiter of the gynamism, lighting candles around the veterans. Four students walked out to the center of the gym holding the American flag as two other students read the names of all the Kelso High School students who died during military service.

Students sat somberly as each name was read aloud along with the a short description of how the service member died. There were 78 veterans on the list spanning 1918 to the late 1960s.

Many vets teared up hearing the names.

“It’s tough,” said Steve West, who served in the U.S. Army. West said his best friend from Kelso High, Harvey Sanders, is on that list of names. Sanders died in the Vietnam War just three weeks after deployment, he said. West said he has 31 friends on the Vietnam Veterans Memorial Wall in Washington, D.C.

Another Vietnam vet, Gary Nunamaker, read a list of somber statistics about that war.

“The young ones paid the highest price,” he said, noting the 39,996 service members who died under the age of 22.

While working as a Kelso High teacher in the early 1980s, Nunamaker and his class decided to research the names of all the Kelso High students who died during wars.

“Each one of these kids has families devastated by their loss. When you hear these names I’d like you to think about the sacrifices,” he said.

And as the band played “Taps” to a quiet crowd, those sacrifices were certainly remembered.

Kelso High School Choir members ringed the basketball court floor and lit a candle for each of the 78 names read of Kelso graduates who had died during service in the military.