The proposal for a hosted homeless encampment took another step forward Thursday when the Longview City Council changed city rules, allowing it to be in place for a year and hold double the number of people.

After a long and often tense discussion, in a split vote the council approved the ordinance changing the hosted camp code, as well as an interlocal agreement with the county.

The ordinance changes the code to allow the camp for a year, rather than 90 days, and a maximum of 100 people, up from 50. The new ordinance requires a good neighbor agreement, previously only needed for emergency shelters. The agreement requires a program description, safety and security plan, property and site maintenance requirements and a community engagement plan.

“A year is bare minimum to have a program that’s an effective use of resources,” Councilmember Hillary Strobel said Thursday. “I understand 100 may sound like a number plucked out of thin air, but it’s based on best practices from models all over the country. It’s not the end-all-be-all, but we have to start somewhere.”

The council’s homeless committee has worked with city and county staff since December to expand the draft plan with input from the council and county commissioners, as well as on an interlocal agreement outlining the city’s and county’s responsibilities.

On April 22, the council discussed the proposed pilot project plan and the interlocal agreement, as well as the need to alter the ordinance to better fit the plan. The committee and some backers of the camp said 90 days was not enough time for the site to effectively help people.

A main point of disagreement Thursday was a location for the site was not included in the ordinance or agreement.

“I suggest this council name a proposed location, so when the committee meets with the county they’re given a clear direction of the location,” he said. “Residents are looking for leadership and where this camp will be sited.”

Strobel said adding a specific location for a hosted site to the city’s code is outside the scope of the ordinance.

The council’s homelessness committee wanted to the get the “bones of the concept” put together first before fully discussing location, which could better be explored in a workshop, said Councilmember Christine Schott.

“We need to stop conflating not voting on a location as part of this ordinance amendment to equal that we’re not giving public opportunity to weigh in on location,” Strobel said. “We don’t want to silence the public by not discussing location tonight. We’re more than willing to discuss location and open to public comment.”

Several members of the public said they supported changing the ordinance to allow the hosted site plan to advance, and a couple spoke against the site.

The council approved the ordinance in a 4-3 vote, with Wallis, Makinster and Wallin opposed.

The council also approved a resolution authorizing the city manager to enter an agreement with Cowlitz County for the hosted encampment project.

The agreement states the site would be located in Longview, funded by the county, operate for 12 months and include on-site services and case management.

The county would pay for the site with local document recording fees, which the state requires to be used for housing and homeless programs. The county collects about $850,000 in the fees annually, according to its website.

The Longview City Council advanced a plan Thursday for a hosted homeless encampment after more than two hours of discussion and public comment.

Wallin proposed an amendment to add the pilot project framework to the agreement.

Strobel said the committee is not trying to throw out the plan the public has been shown, and everything being proposed in the agreement will be discussed when the city knows if the county will sign on.

Councilmember Steve Moon said he has faith in city manager, staff and the homeless committee that have worked for months on the project.

“I am optimistic we will get a hosted camp. I think it’s a step in the right direction,” he said.

Wallin said he was “hopeful a hosted camp will be created and be successful” but he wouldn’t vote for the agreement because the resolution and ordinance were “bad policy.”

The agreement passed 4-3, with Wallin, Makinster and Wallis opposed.

The hosted site would replace the Alabama Street site, set up by the city in December 2019. As an unhosted site, the camp has few rules or guidelines.

The COVID-19 pandemic halted plans to close the site in March 2020. An ad hoc committee formed to find and recommend alternative locations for a hosted site disbanded in June after members spent several months in deadlock and faced community pushback against proposed locations.

At the county commissioners’ direction, James created the draft plan for a hosted encampment as an alternative to the Alabama Street site and presented it to the Longview council in November. The council and commissioners agreed to further develop the plan during a joint meeting in December.

The council’s homeless committee has worked with city and county staff since December to expand the draft with input from the council and county commissioners, as well as on an interlocal agreement outlining the city’s and county’s responsibilities.

On April 22, the council discussed the proposed pilot project plan and the interlocal agreement, as well as the need to alter the ordinance to better fit the plan.

Only online: Visit our website to read the complete agreement approved by the Longview City Council. tdn.com

Gil Schauer crochets plastic mats with recycled grocery bags so the homeless can have softer bedding than the hard ground.

For many of the people living at the Alabama Street homeless camp in Longview, there are numerous reasons why they don't stay at the county's two emergency shelters or one of several temporary housing programs. 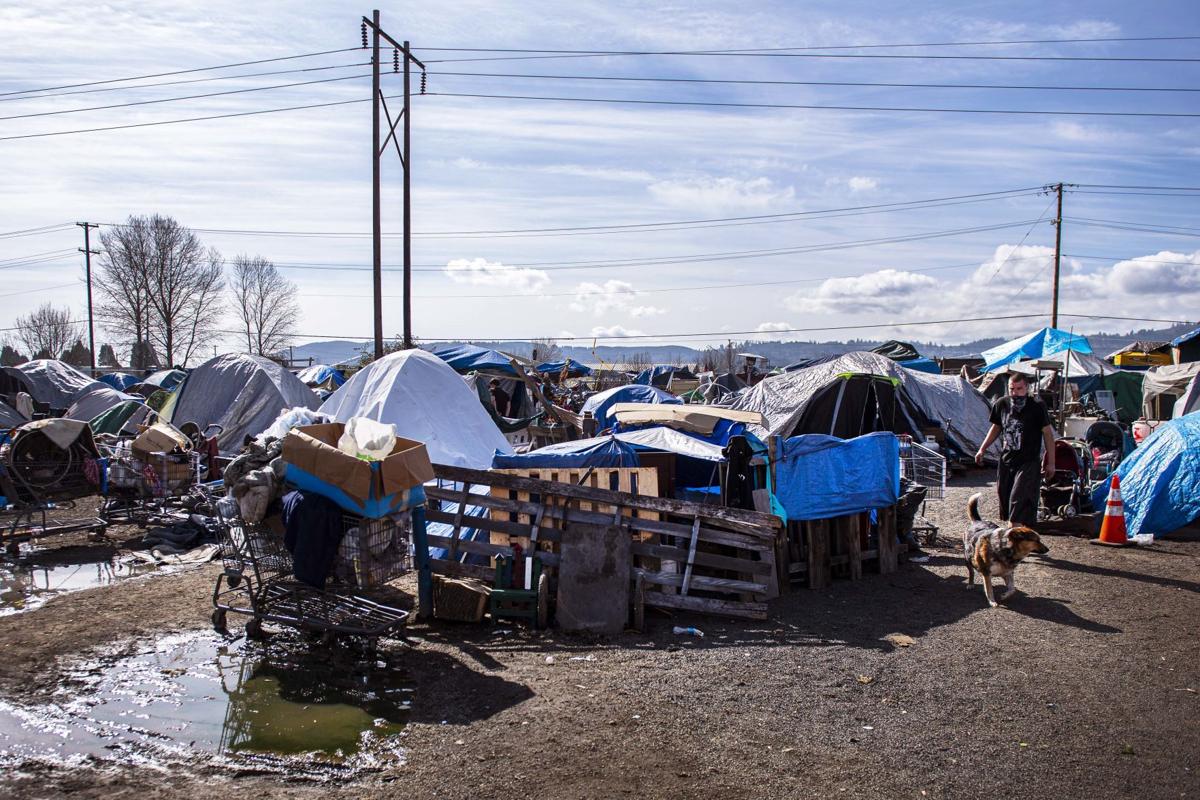 People walk around the Alabama Street and Oregon Way homeless camp in Longview on April 2. The Longview City Council Thursday discussed the expanded plan for a hosted homeless camp. 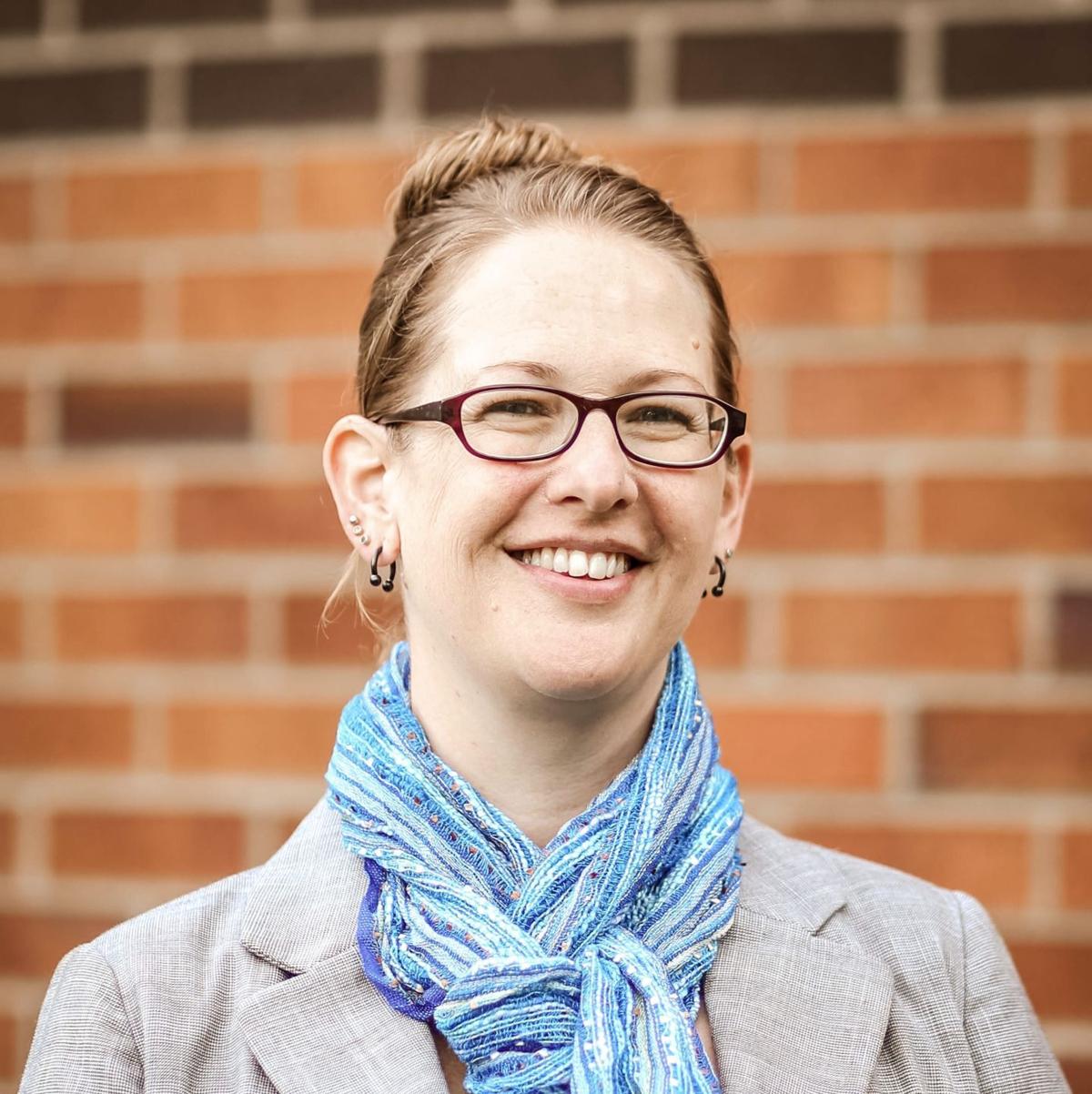 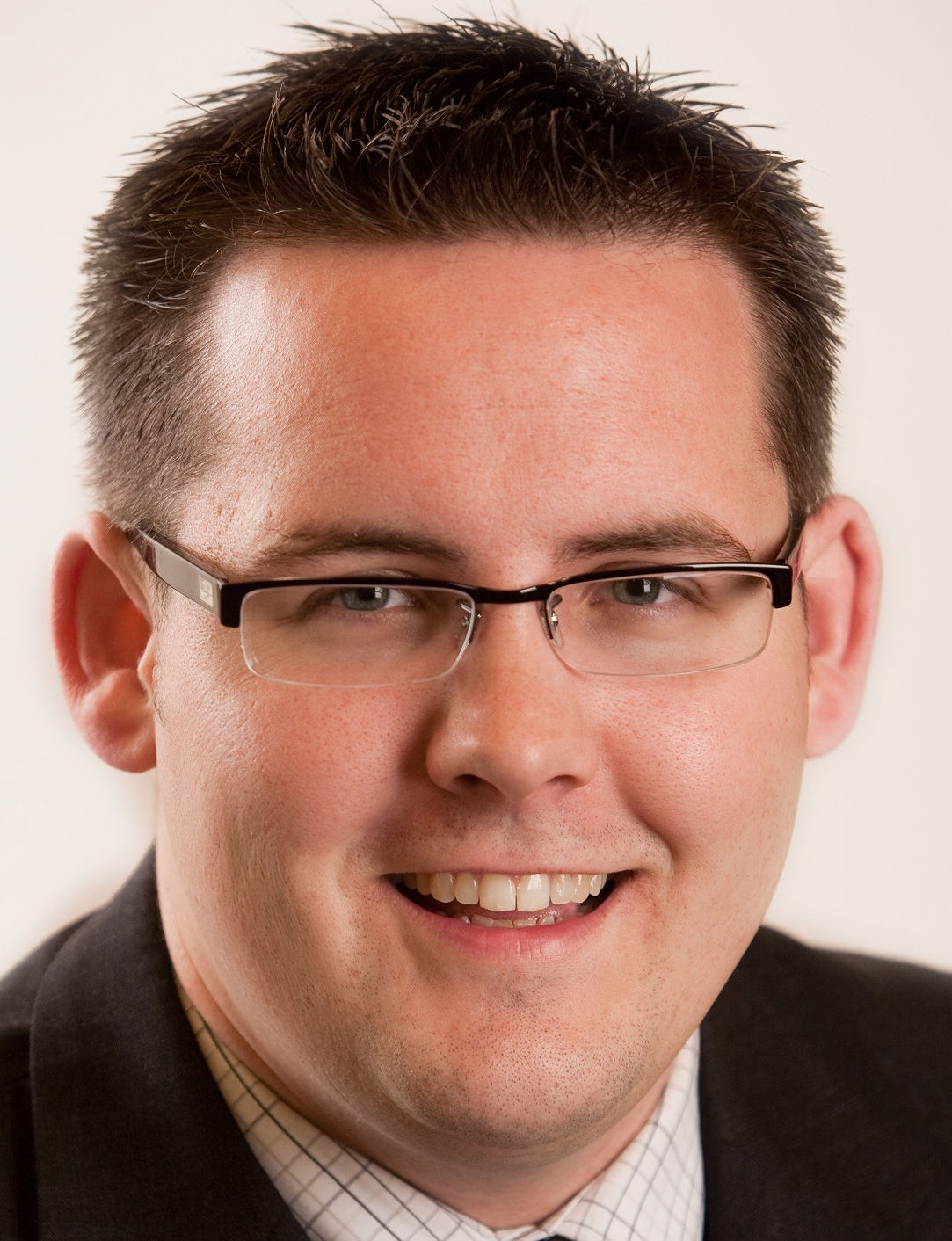